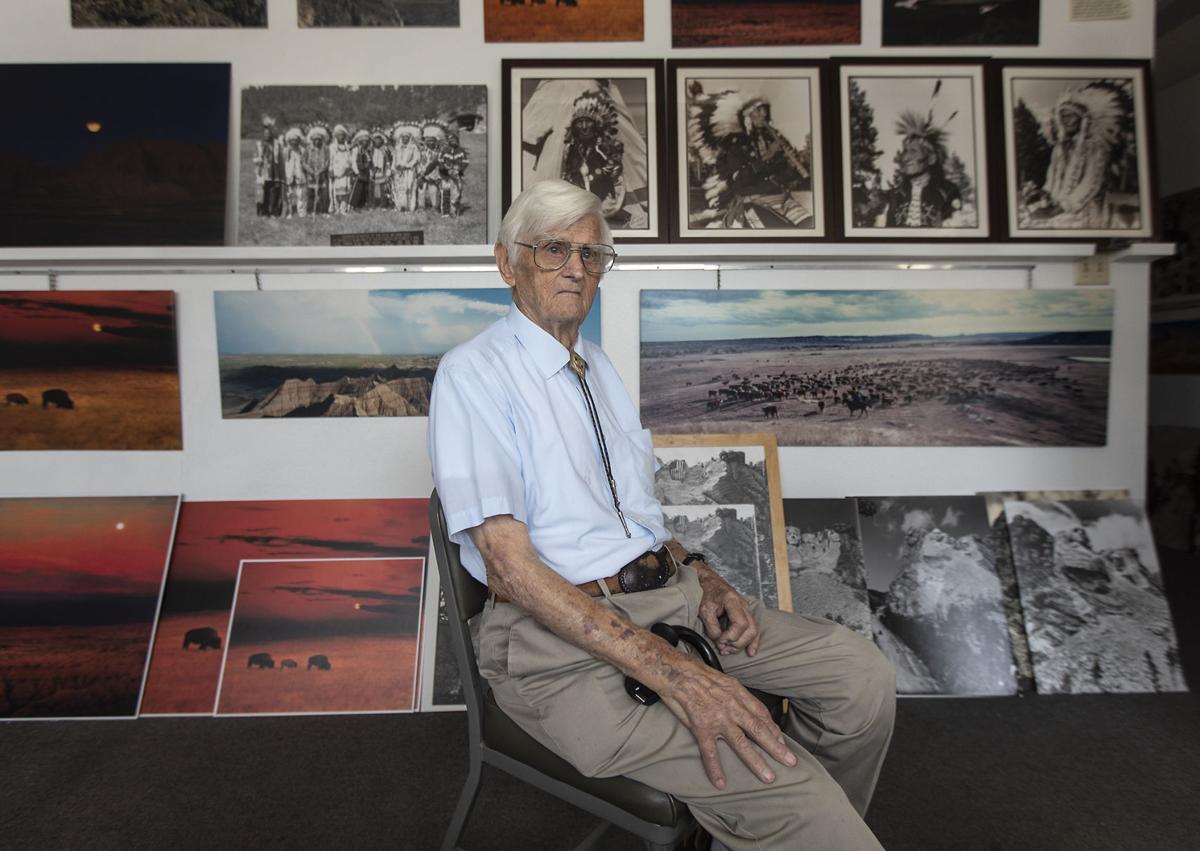 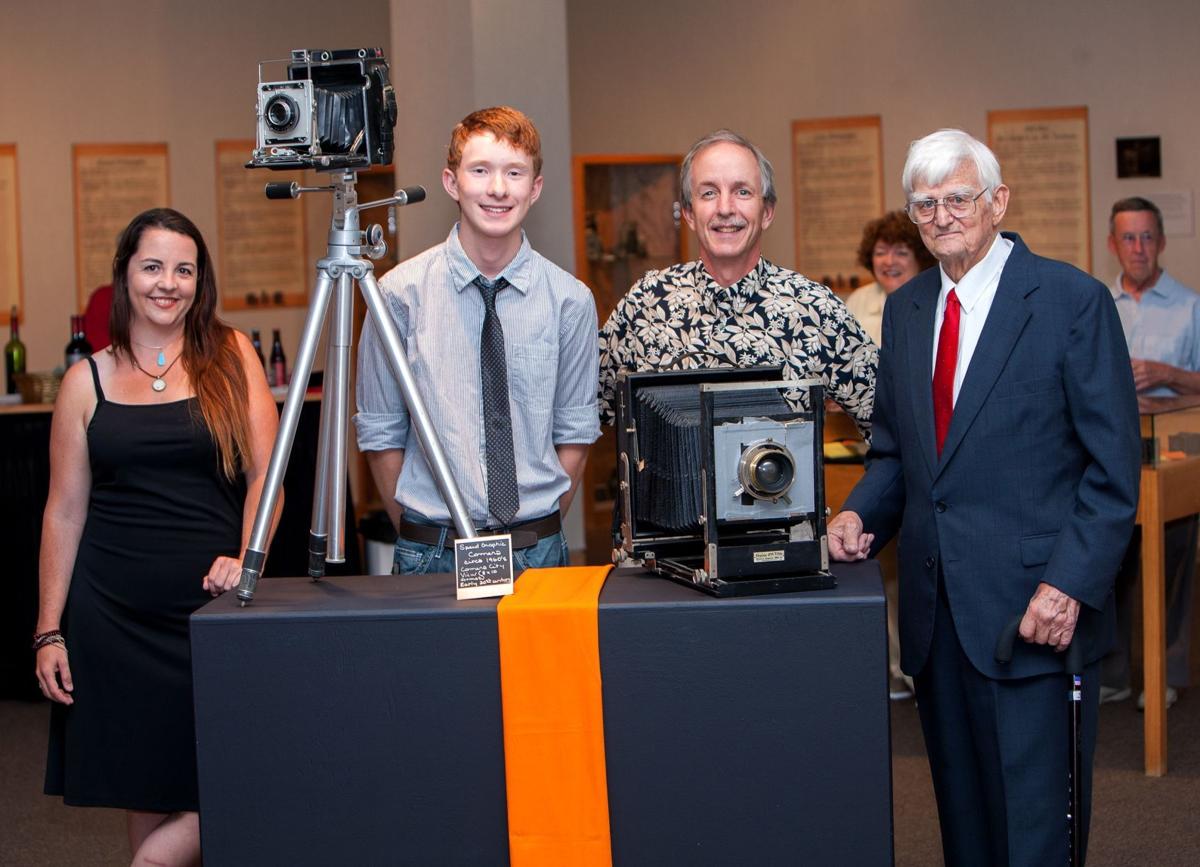 Bill Groethe was one of four outstanding photographers featured in an exhibit at The Journey Museum about the history of photography in the Black Hills. The photographers, shown here on Aug. 1, 2014, are Bonny Fleming, Colton Erk, Paul Horsted and Bill Groethe. Groethe also gave presentations for The Journey Museum. His final one was about his time in the Army Air Corps as a photographer. "He was such a great man and did so much for capturing history in the Black Hills. He'll be greatly missed," said Mark Slocum, executive director of the Minnilusa Historical Association, which preserves regional history through the pioneer collection at The Journey Museum.

South Dakota Hall of Fame photographer Bill Groethe is being remembered by colleagues and his family as a man passionate about capturing the beauty and history of South Dakota and who passed along his love of photography to as many people as he could.

Groethe died Dec. 20 at age 97. The lifelong Rapid City resident is best known for his exclusive photos of the last reunion of nine Oglala Sioux survivors and descendants of the 1876 Battle of Little Bighorn and for documenting the carving of Mount Rushmore.

Groethe photographed many local and national political leaders as they visited the Black Hills, including presidential visits of both George Bushes, Dwight D. Eisenhower, Franklin D. Roosevelt and Barack Obama. In 1996, Sen. Tom Daschle invited Groethe and his wife, Alice, to an honoring ceremony in Washington, D.C., to recognize his work in the Smithsonian Archives. Groethe was inducted into the South Dakota Hall of Fame in 2019 and had continued working until earlier this year when he closed his longtime Rapid City business, First Photo.

Groethe started his career as an apprentice for Bell Studio photography, a job that sometimes involved carrying equipment for a photographer who was documenting Mount Rushmore under construction. Groethe later served as a photo reconnaissance technician for the Army Air Corps in World War II.

Markus Erk of Rapid City runs Photography by US with his wife, Candy Erk Manthey. Groethe gave Erk his first job as a photographer in Rapid City in the early 1980s when Groethe’s business was called Rapid Film Service by Qualitone. Erk recalls that Groethe helped him pay for his first 35mm camera, and he bought his first large-format camera for shooting panorama shots from Groethe.

“Bill was very good at shooting panoramic pictures of landscapes of the Badlands and scenic pictures. He had a very good eye for that,” Erk said. “He was an icon of photographers in the Black Hills region.”

“He was a perfectionist when it came to his black-and-white prints,” Erk said. “He taught me to be passionate about my work. … He had a good eye for color and for lighting and exposure, and I would say I still hold onto that today.”

Erk credits Groethe’s wife as a key to her husband’s success.

“Bill and Alice worked hard over the years to build the reputation they have. Alice was right in there too with the business end of things and sales. She was in the story right up until they closed,” Erk said.

Groethe’s granddaughter, Emma Mincks, said her grandfather began taking photos at age 7. Groethe never talked about retirement until about a year ago because of his health.

“He was always very focused on doing what he loved,” she said. “He remained curious about it forever, which is really amazing, and he still loved it even when it became harder for him to do it. I never have met anyone in my life who knew what they wanted to do when they were that young and cared about it until the day they died.”

Groethe loved sharing his knowledge of photography with customers, family members, and other artists and photographers. Mincks said he gave cameras to friends and customers and challenged them to be intentional, take their time, and capture a perfect shot. Then he’d offer to develop their film of that perfect shot free of charge.

“He really appreciated the people who did listen and were curious,” Mincks said. “He did think it was important to slow down and be more observant. That was something he taught me.”

“He wanted everybody to see the world the way he saw it and experience that adrenaline rush of doing things very, very well and be proud of it. He truly wanted people to be good at photography and to enjoy taking photos,” she said.

Groethe was interested in Lakota spirituality and spent more than 30 years working on a still-unfinished series about the 12 moons of the Lakota. Mincks sometimes accompanied Groethe on those photo shoots, recalling he was a patient grandfather who encouraged his grandchildren to experiment with cameras and tripods.

“We would have to wait for the perfect time and do it at the perfect time of year. Usually, he would get the shot he needed with one shot and that was just because he was so technical but also it was an intuitive thing for him,” Mincks said. “Each of his shots has such an amazing story.”

Though he kept pace with technology and used digital photography equipment, Groethe preferred a slower, deliberate pace. His photography was influenced by his interests in physics, chemistry, math and aeronautics.

“He really cared about documenting things in a specific way. It was important to him to use the right camera, to use the correct film speed, to stand in the right spot. He would set everything up long before the shot so he was prepared,” she said. “We would bring a car full of cameras and tripods.”

“He always said you don’t need filters, you don’t need light correctors, but you need to know about the mechanics of the camera and the world around you, and then you can understand what’s happening and wait for the right moment to take the perfect shot,” she said.

Bill Groethe was one of four outstanding photographers featured in an exhibit at The Journey Museum about the history of photography in the Black Hills. The photographers, shown here on Aug. 1, 2014, are Bonny Fleming, Colton Erk, Paul Horsted and Bill Groethe. Groethe also gave presentations for The Journey Museum. His final one was about his time in the Army Air Corps as a photographer. "He was such a great man and did so much for capturing history in the Black Hills. He'll be greatly missed," said Mark Slocum, executive director of the Minnilusa Historical Association, which preserves regional history through the pioneer collection at The Journey Museum.