Oladokun, who came to SDSU as a graduate transfer (Samford, USF) over the summer was 18-for-28 passing without an interception. Strong piled up 106 yards by halftime, finishing with 138. Sophomore Isaiah Davis rushed for 84 yards and a TD, most in the second half. Jadon Janke caught six passes for 92 yards and a pair of touchdowns.

The FCS versus FBS matchup was the season opener for each team, and out of four meetings Friday between the two college football subdivisions, South Dakota State was the lone FCS team to pull out the upset.

Lightning and a brief downpour delayed kickoff by 40 minutes, but South Dakota State — ranked No. 3 in the FCS poll and runner-up in the May FCS championship game — brought the lightning after halftime.

The Rams failed to convert a risky fourth-and-1 in their own territory on their first possession of the third quarter when David Bailey was stopped for no gain at the 38. The Jackrabbits scored in two plays when Oladokun passed for 21 and 17 yards, the latter to Janke, pushing the lead to 28-10.

After pinning South Dakota State at the 3 with a deep punt, Colorado State regained possession at midfield, but Todd Centeio was sacked and fumbled. Davis capped SDSU's eight play drive with three straight carries including a fourth-down conversion from the 3 and a touchdown from the 2.

The score blew the game open at 35-10, and the teams traded touchdowns over the final quarter.

The win was SDSU's second over an FBS opponent in 11 tries, first since 2015 (Kansas). Colorado has not won a season opener since 2017.

LAWRENCE, Kan. — Wins have been so rare at Kansas over the last decade-plus that it wasn't too surprising when students spilled from the stands and rushed the field to celebrate Lance Leipold's first victory as head coach of the Jayhawks.

Who cares if it came against lower-level South Dakota?

It wasn't easy, either. Jason Bean connected with Lawrence Arnold for their second touchdown of the game, giving the Jayhawks the lead back with 1:12 remaining Friday night, and their rebuilt defense held the Coyotes on downs to preserve a nervy 17-14 victory that brought an end to a 13-game skid dating to Oct. 26, 2019.

"Right now we're not going to get concerned about style points and things like that. We needed to get a win," Leipold said. "Getting a victory was first and foremost right now and as I said, then we go to the film and work to get better."

The Coyotes, who trailed 10-0 late in the third quarter, had pulled ahead when Kansas native Travis Theis ran 25 yards for a score with 5:16 to go. But the Jayhawks answered by driving 64 yards in less than four minutes, converting fourth-and-10 along the way and getting some help from a targeting penalty on South Dakota freshman Myles Harden.

Then the touchdown pass to Arnold that set off the wild celebration.

"I feel like it was never in doubt about us coming back," Arnold said. "There's always momentum changes in the game, it's about how you respond. We never looked at it like we couldn't come back or couldn't do this."

Bean, the North Texas transfer, also found Arnold for a score late in the second quarter. He finished 17 of 26 for 163 yards while adding 54 yards on the ground. But he didn't get much help from the rest of the offense — Velton Gardner carried 19 times for 21 yards, and the Jayhawks' rebuilt offensive line provided little resistance.

"We didn't run the ball the way we hoped. I'm not going to make any statements about where we're at without watching the film," Leipold said. "To be a better offensive football team, we're going to have to play better as a unit. But again, this gives us an idea of what we need to work on."

South Dakota couldn't take advantage of it, though.

The Coyotes, who have beaten Minnesota and Bowling Green over the years, were penalized eight times, went 3 for 13 on third down and 0 for 3 on fourth. Carson Camp was just 10-for-22 passing for 98 yards.

Leipold was hired earlier this year when Les Miles, the latest in a growing list of failed Kansas coaches, resigned following sexual harassment allegations dating to his national championship-winning tenure at LSU.

A longtime Division III coach, Leipold promised to bring along fundamentally sound football, relying on the same formula that produced six lower-level national titles in eight seasons and an impressive turnaround at Buffalo.

Instead, the Jayhawks mostly looked like the same team that hasn't had a winning season in more than a decade.

They went three-and-out on their first three possessions, a streak of ignominy interrupted only by two false start penalties, and by the end of the first quarter had more penalty yards (20) than yards of offense (18). And after taking a 10-0 lead on Bean's TD pass to Arnold and Jacob Borcila's field goal, their meager advantage was quickly wiped out.

South Dakota's first score came when Lawrence made a defender whiff in the defensive backfield and scooted 29 yards late in the third quarter. Then, after the Coyotes stuffed Kansas on fourth-and-inches at their own 46-yard line, Theis took a handoff two plays later 25 yards for a touchdown and their first lead of the night. 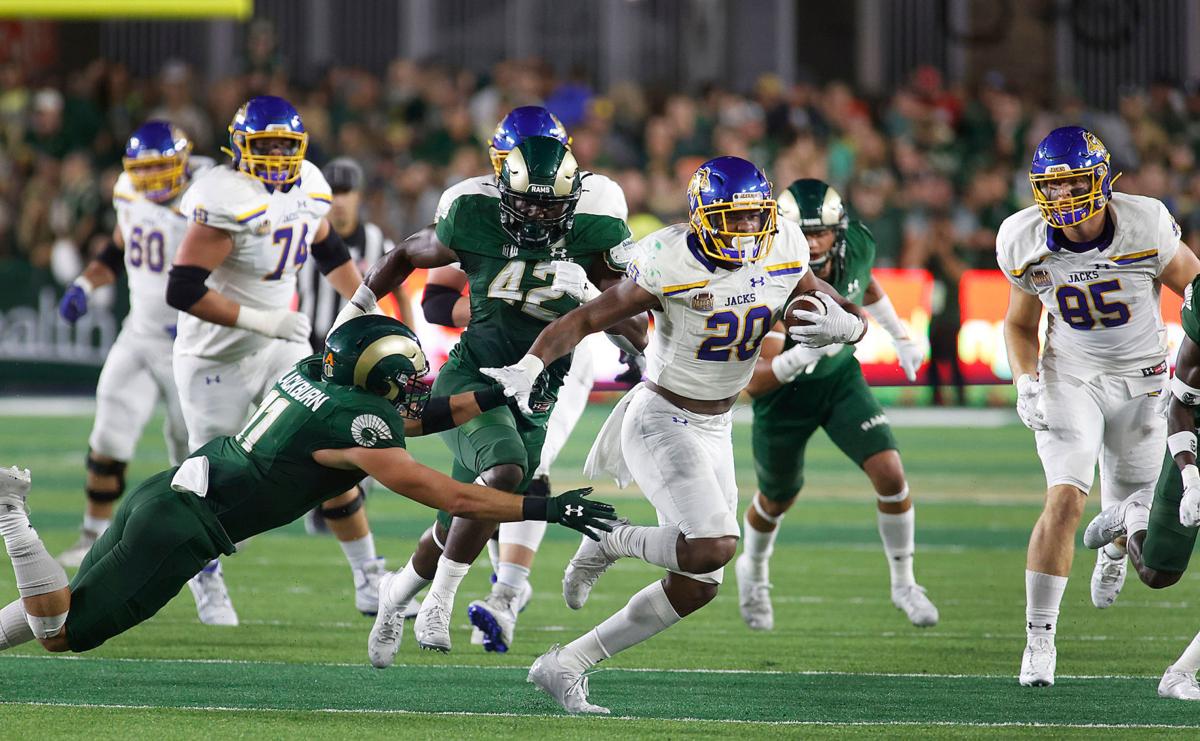 Pierre Strong Jr., 20, of the South Dakota State Jackrabbits runs past Henry Blackburn, 11, of the Colorado State Rams during their game Friday evening at Canvas Stadium in Ft. Collin, Colo. 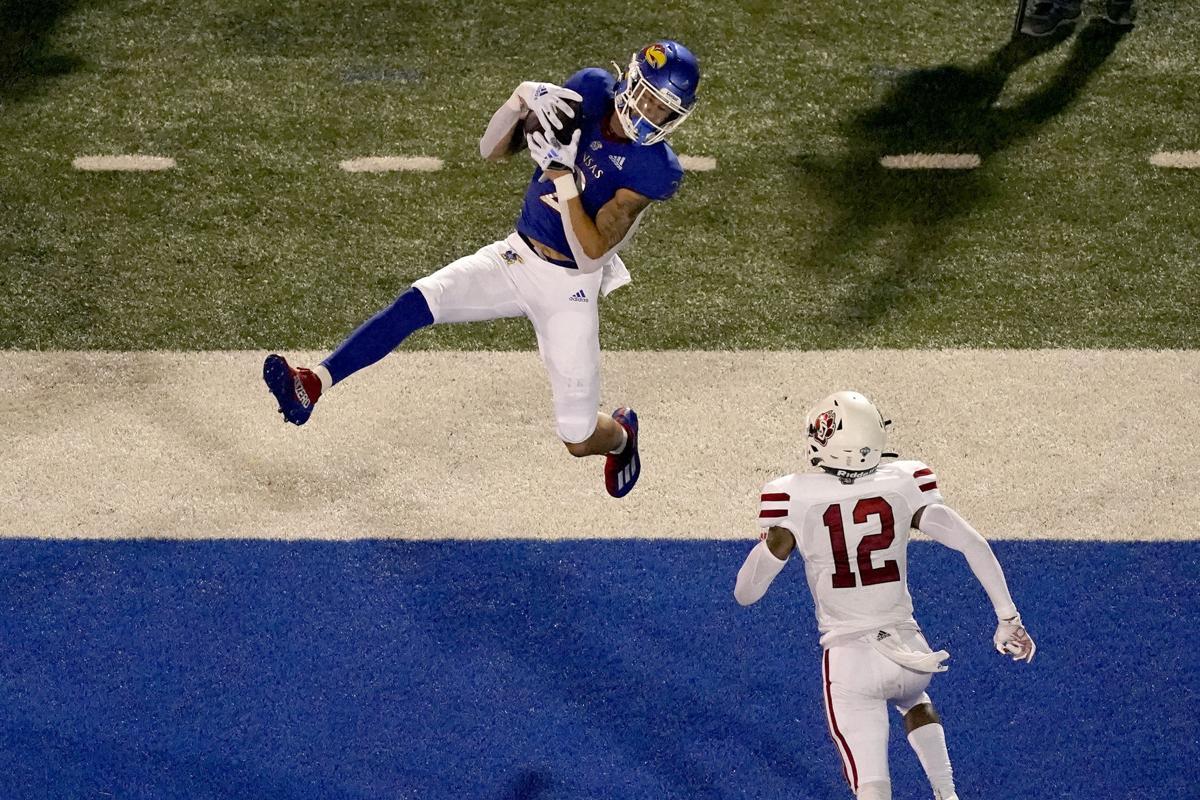 Kansas wide receiver Lawrence Arnold (2) catches a pass over South Dakota defensive back Tre Jackson (12) to score a touchdown during the first half Friday in Lawrence, Kan.