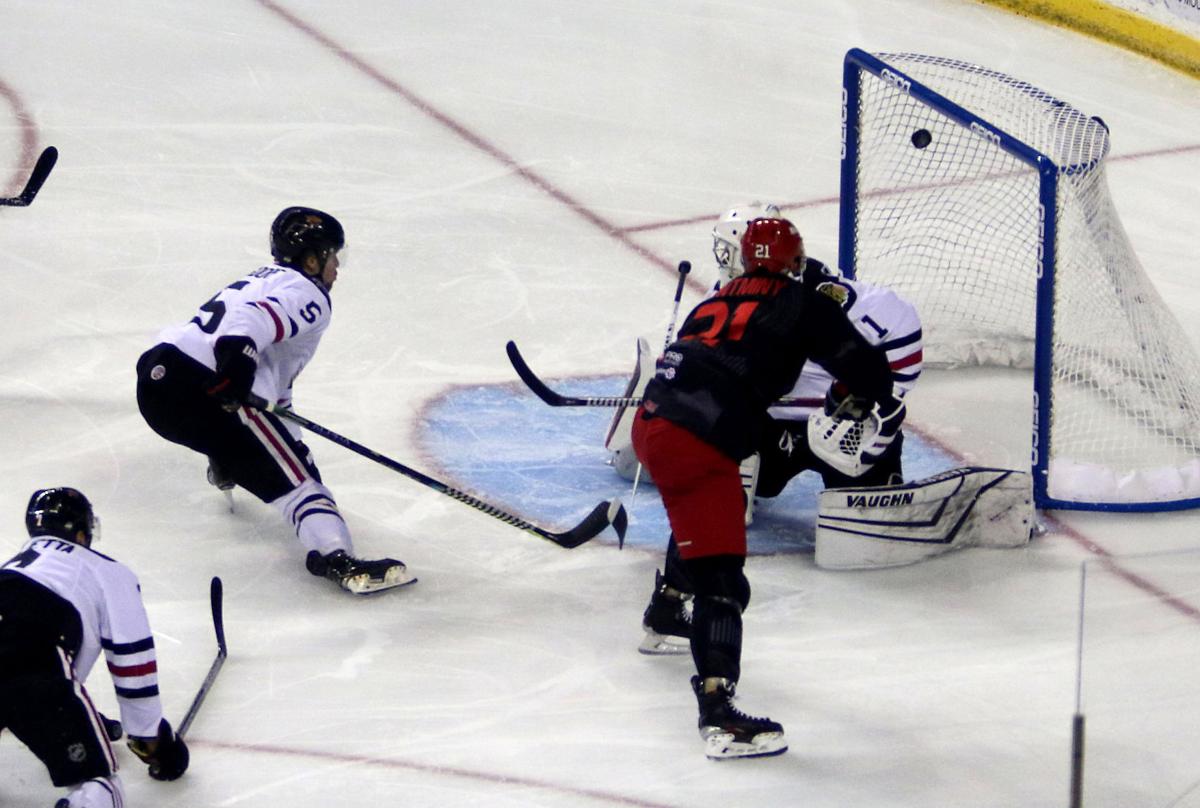 Rapid City forward Cedric Montminy scores on a breakaway in the first period to tie the game at 1-1 Saturday night. 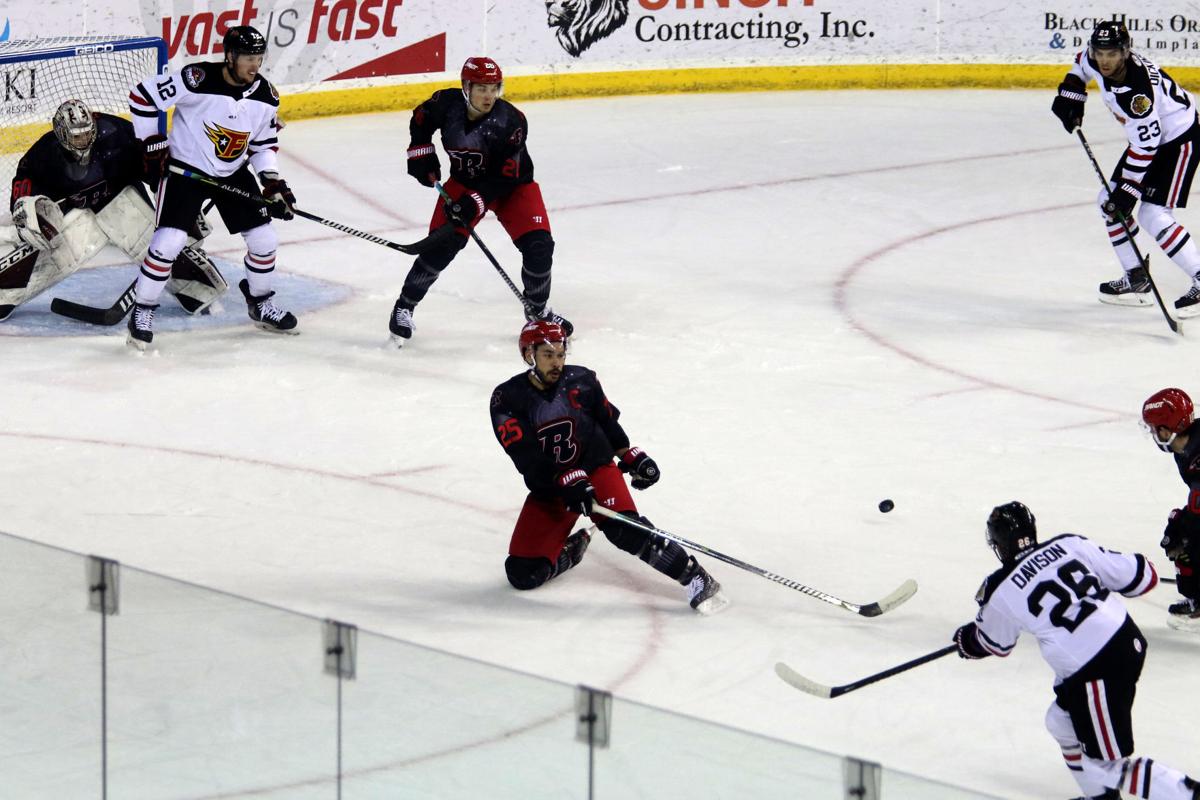 Rapid City captain Mikael Tam sacrifices his body to block a shot on an early power play for Indy. 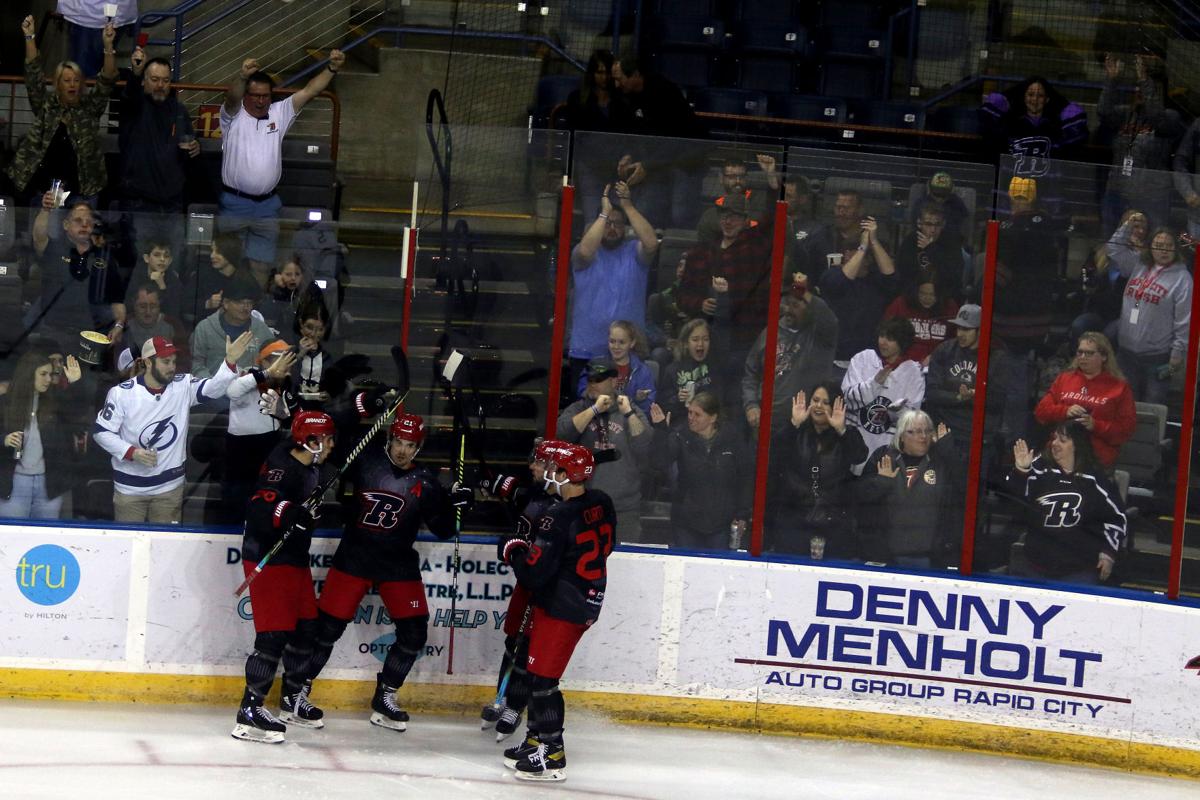 Some of the big Military Appreciation night crowd celebrates with Cedric Montminy after he scored in the first period Saturday night. 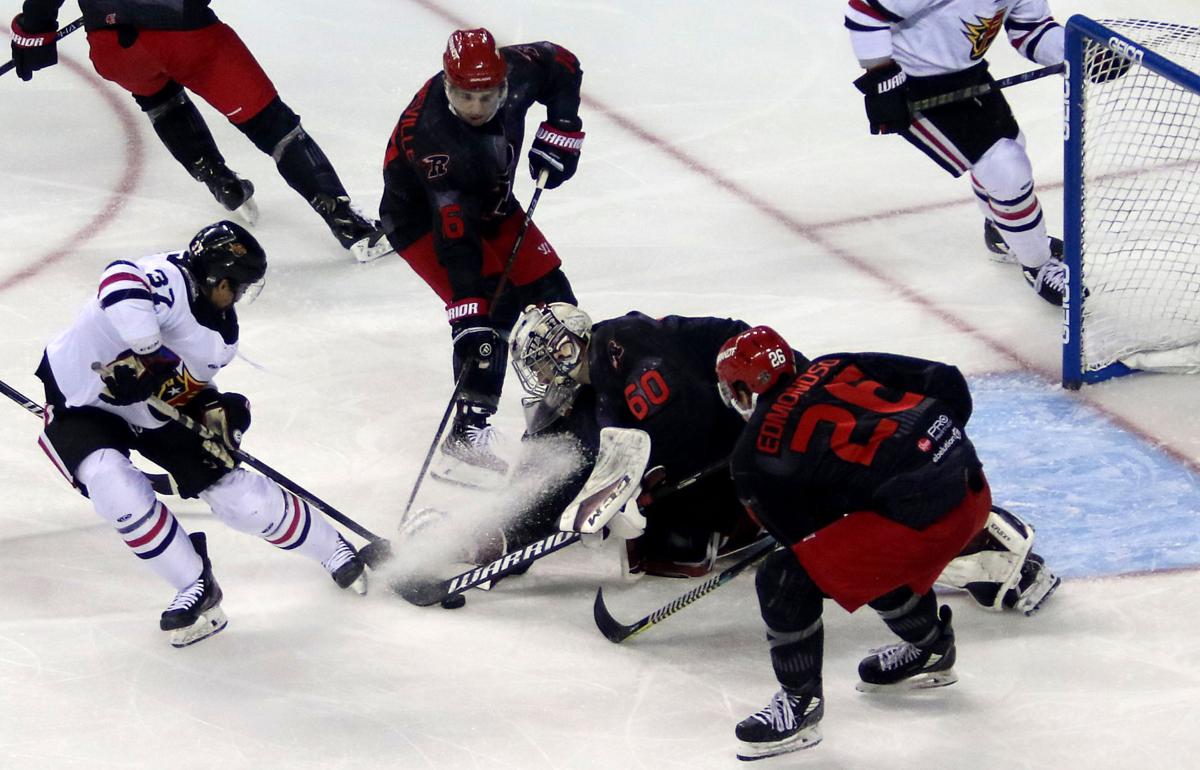 Rapid City goalie David Tendeck is sprayed with ice as he makes a save Saturday night for the Rush.

The Rapid City Rush penalty-kill unit successfully kept the Indy Fuel at bay through the first two games of the series, games they wound up winning.

Saturday was a different story, as the Fuel tallied all three of their goals via power play, potting two in the final period as tensions flared to snap the Rush’s three-game winning streak and take the third meeting of the series 3-2 at Rushmore Plaza Civic Center. The Rush themselves went 0-for-5 on their man-advantages.

“They were (costly),” Rapid City head coach Daniel Tetrault said of the penalties, “But we had our opportunities on the power play as well and we didn’t capitalize, so on special teams we lost the battle. We had some chances, we didn’t execute on them. A lot of chances, a lot of shots, but we couldn’t put the puck in the net, so it’s tough.”

The Rush (32-28-4) fell further behind the Utah Grizzlies for the fourth and final playoff position in the Western Conference, as the Grizzlies topped the Allen Americans 2-1 in overtime for a 0.054 percentage points advantage, approximately three and a half games, with six games remaining in the regular season. Despite the loss, the Americans clinched a spot in the Kelly Cup Playoffs, leaving two spots left.

“It’s disappointing,” Tetrault said. “The guys fought hard, but at the end of the day we only scored two goals and we didn’t score power-play goals, so it cost us.”

The first of Rapid City’s eight committed penalties came in the first minute, as Ian Edmonson was called for hooking. Spencer Watson took advantage of the early opportunity when he fired a slap shot over the stick-side shoulder of Rush goalie Dave Tendeck at 1:52 to give the Fuel (32-22-7) a 1-0 lead.

Killing off two more penalties in the frame, Rapid City leveled the contest when Cedric Montminy came out of the box following a slashing infraction and immediately called for the puck. Eric Israel answered the request and fed the Sherbrooke, Quebec native a pass, which he wristed left from the right at 4:47 to make it 1-1.

Israel then put the Rush in front when he rifled in a one-timer from Edmonson from the high slot at 6:44 of the second period to pick up his first goal of the season.

Rapid City also had 22 seconds of a 5-on-3 in the closing minute of the middle frame, and was on a power play for four total minutes, but failed to score.

After Indy killed off the remaining 1:05 of the power-play to begin the third period, it earned its own 5-on-3 when Israel was called for cross-checking and John Albert was nabbed for slashing. Watson came through again, notching his second power-play goal from the slot at 4:57 to tie things at 2-2.

Following two nights of relatively civil hockey, the hostility among the two clubs boiled over when Montminy was pestered by Dimitry Osipov in the corner, absorbing multiple shoves. Montminy and his Russian counterpart dropped their mits as a result and both were sent to the sin bin at 10:28.

A multi-skater scuffle occurred only 22 seconds later when Coulter was table-topped by Watson, leading to double-roughing penalties called on Avery Peterson and Tommy Apap. On the subsequent 4-on-4, Darren Brady nearly put the Rush ahead with a shot from the point, but the puck ricocheted off the crossbar.

The Fuel picked up another power play when Kevin Spinozzi was nabbed for hooking, but failed to take advantage this time when they were called for their second too-many-men infraction 1:25 into the effort. Right before the 4-on-4 expired, however, Matt Marcinew stuffed a rebound past Tendeck for the eventual game-winner at 18:06.

Due to a boarding call on Indy with 31.9 seconds remaining in regulation, the Rush earned a 6-on-3 chance for 10 seconds after pulling Tendeck, and then had the remaining 21 seconds with a 6-on-4 to find an equalizer. Twice on the late push, however, sticks were broken on slap-shot attempts.

Tendeck finished with 21 saves in the loss.

“Sometimes that’s the game of hockey,” Tetrault said. “You don’t get breaks and then you get broken sticks. No puck luck tonight.”

The Rush and Fuel return to the Civic Center on Sunday for the last of four meetings. Puckdrop is slated for 4:05 p.m.

“No quit,” Tetrault said on trying to turn things around in the series finale. “We’ve got a chance to win the series tomorrow with a big win. Just come back tomorrow and play hard.”

FIRST OF THE YEAR!!! pic.twitter.com/b4GrwZ4TNv

Rapid City forward Cedric Montminy scores on a breakaway in the first period to tie the game at 1-1 Saturday night.

Rapid City captain Mikael Tam sacrifices his body to block a shot on an early power play for Indy.

Some of the big Military Appreciation night crowd celebrates with Cedric Montminy after he scored in the first period Saturday night.

Rapid City goalie David Tendeck is sprayed with ice as he makes a save Saturday night for the Rush.