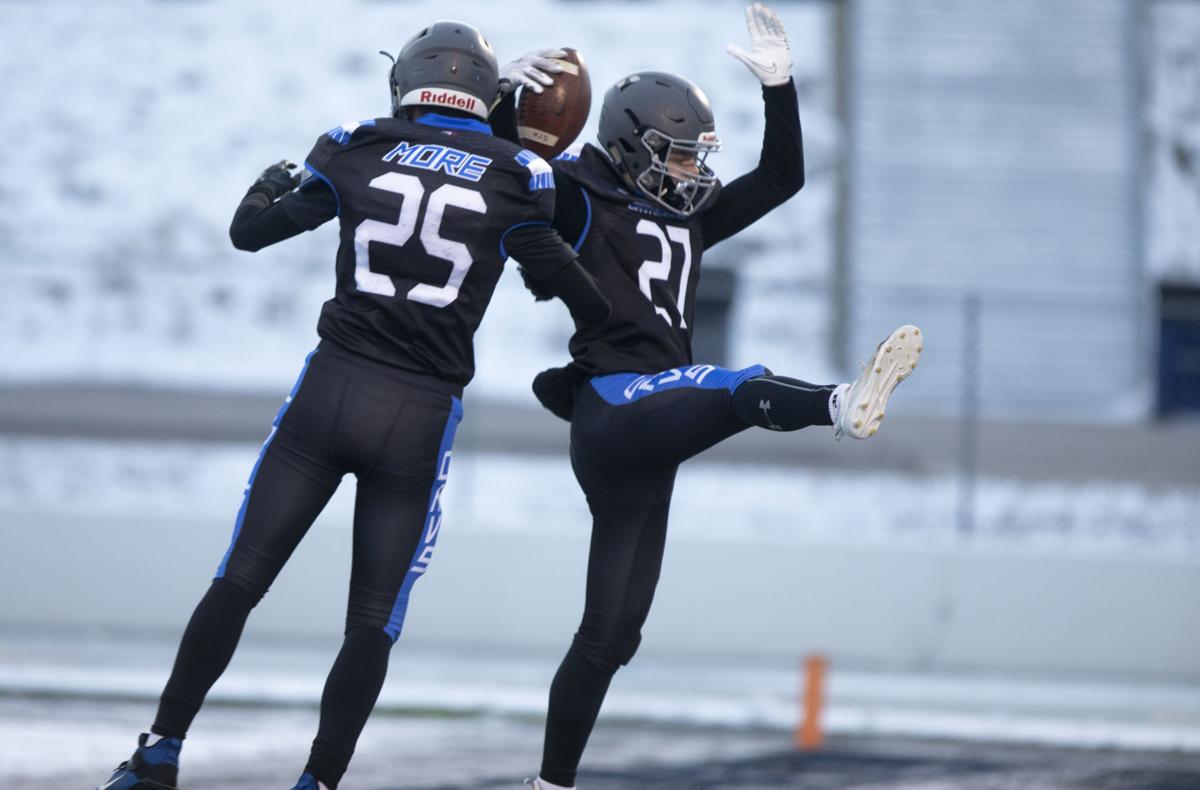 St. Thomas More' sophomore running back Matthew Larson, right, celebrates with Chael Thorn after scoring a 46-yard touchdown Friday at O'Harra Stadium against Redfield in the first round of the Class 11B playoffs. 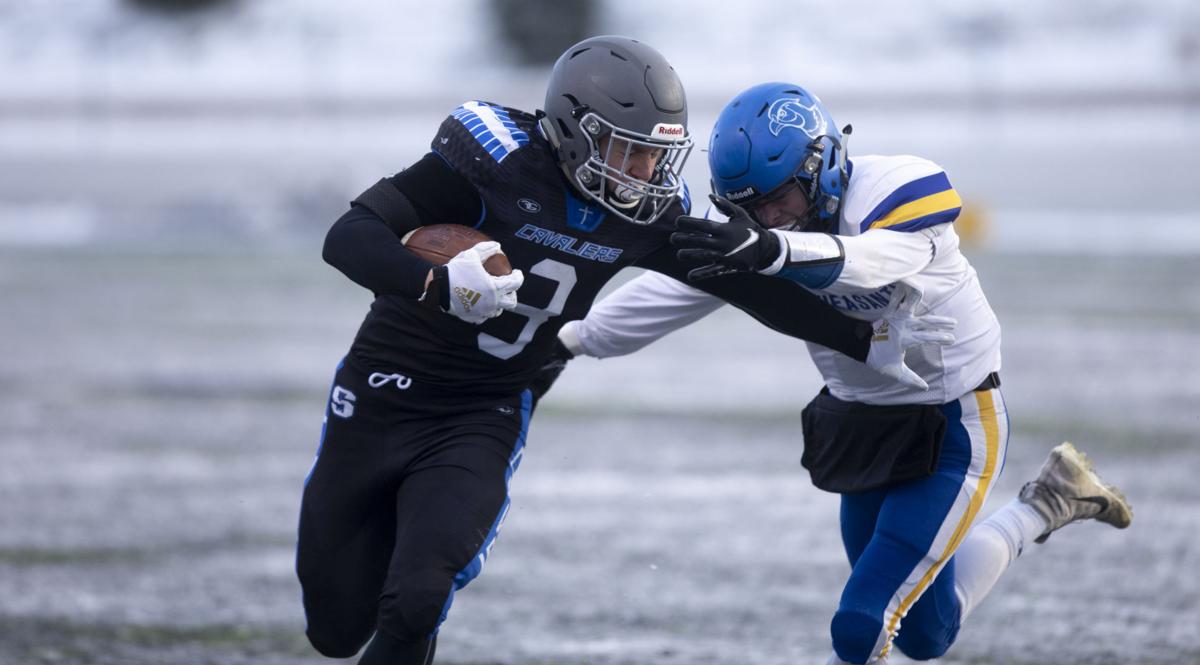 St. Thomas More senior running back Ryan Wojcik tries to break a tackle by Redfield's Dylan Whitley on Friday at O'Harra Stadium in the first round of the Class 11B playoffs. 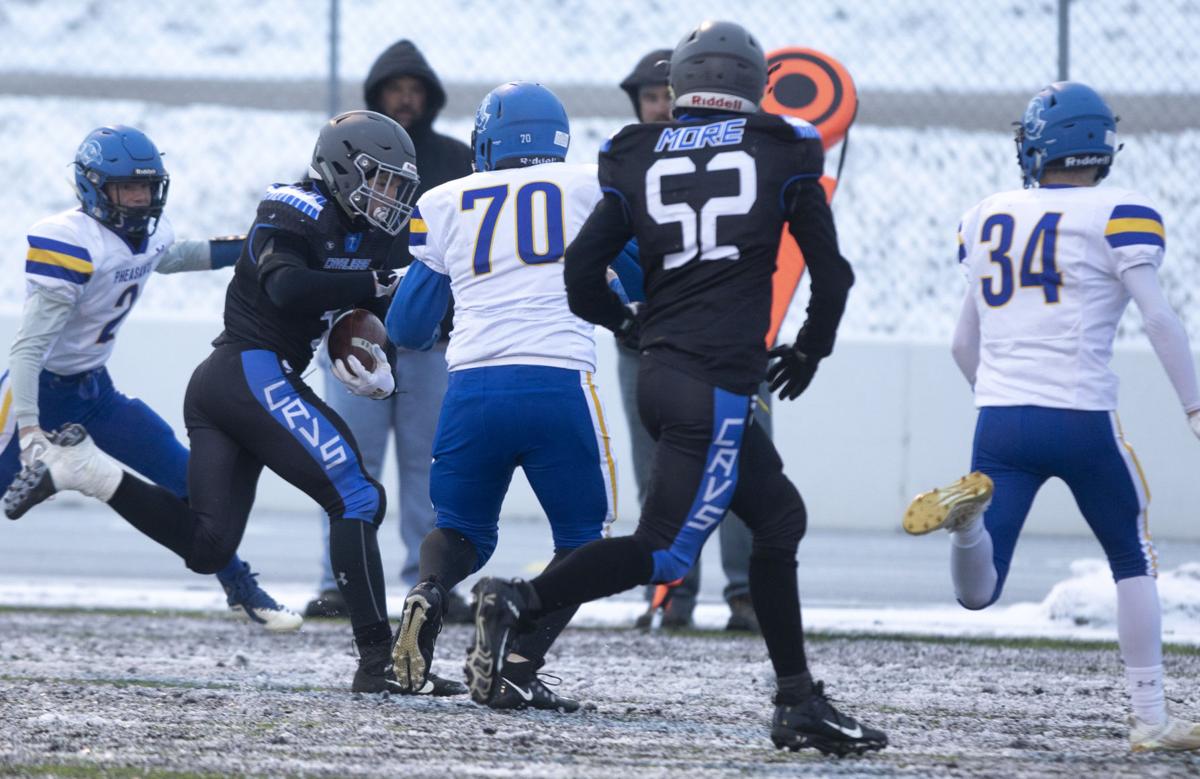 St. Thomas More's senior running back Ryan Wojcik scores the first touchdown for the Cavaliers against Redfield on Friday at O'Harra Stadium.

Make that four shutouts for the St. Thomas More football team this season.

The Cavaliers used a ground and pound approach on offense, and coupled it with a shutdown defense to knock out Redfield 37-0 in the first round of the Class 11B playoffs on a frigid Friday evening at O’Harra Stadium, and set up a quarterfinal clash with undefeated Mobridge/Pollock next week.

“We pretty much stuck to our game plan, what we’ve been doing all year. We didn’t change much tonight,” STM head coach Wayne Sullivan said. “We have a couple wrinkles we’re trying to put in here and there just to go off of what we’ve been doing, and they worked, so we’re really excited to see what we’ve got moving forward.”

The Cavaliers (7-1) earned nearly all of their offense on the ground, rushing for 263 yards against 37 in the air. Sophomore Matthew Larson and senior Ryan Wojcik carried the brunt of the ground game, collecting 133 and 110 yards, respectively, and scoring all five of their squad’s touchdowns.

“It was a team effort at the line. Moved the line of scrimmage really well,” Larson said. “The running backs, we just made a couple cuts, and it was a pretty good game for us.”

“It’s all we worked on all week. We knew they had a stud (quarter)back. We keyed him with a couple of our better tacklers,” Sullivan said of his pass defense. “We really worked on our secondary all week because we’re going to need it next week as well.”

With temperatures in the mid-20s, the Cavaliers moved the ball 23 yards on their opening drive down to the opposing 11-yard line before Charles Larson fumbled, putting the Pheasants (3-5) and their own 13. Four plays later, on third-and-13 from the 10, Miller was dragged down in the end zone trying to throw away the ball, getting STM on the board with an early safety.

The Cavaliers took advantage of the regained possession and executed an eight-play, 38-yard drive that ended when a first-down snap to Wojcik, playing under center, sailed over his head. The 6-foot-2 senior scooped up the loose ball behind him, turned back around and dodged defenders on his way to an 18-yard touchdown run to put his team up 9-0 in the first quarter.

St. Thomas More needed just four plays on its next possession when Matthew Larson sprinted down the middle of the field for a 46-yard touchdown early in the second. Wojcik tacked on one more score before halftime with a 7-yard run to cap off a nine-play, 58-yard drive to make it 23-0 at intermission.

“You win the line of scrimmage, you win games,” Sullivan said. “And we were able to do that and keep the ball on the ground.”

In the third quarter, a 33-yard completion from Jed Sullivan to Jake Goble, just the third passing attempt all game by the Cavaliers, set up Wojcik for a 3-yard touchdown to give STM a 30-point advantage. Matthew Larson added a final touchdown with 3:10 to play in the final frame from 3 yards out.

“This is the time you’ve got to get after it, and our boys stepped up,” Sullivan said. “We didn’t play a very good game in the first half, so those are things we can always improve on, but it was a good outing for our boys.”

Wojcik picked up an interception and a sack on defense, while Matthew Larson and Chael Thorn also collected picks. Kellen Weber and Ben Feist earned one sack apiece.

“It really gives us confidence because we realize we can play with these other East River teams,” Matthew Larson said of the victory. “And I think it might scare a couple teams watching us.”

The Cavaliers, 7-1, will be at Mobridge-Pollock Thursday in the 11B quarterfinals.

St. Thomas More' sophomore running back Matthew Larson, right, celebrates with Chael Thorn after scoring a 46-yard touchdown Friday at O'Harra Stadium against Redfield in the first round of the Class 11B playoffs.

St. Thomas More senior running back Ryan Wojcik tries to break a tackle by Redfield's Dylan Whitley on Friday at O'Harra Stadium in the first round of the Class 11B playoffs.

St. Thomas More's senior running back Ryan Wojcik scores the first touchdown for the Cavaliers against Redfield on Friday at O'Harra Stadium.