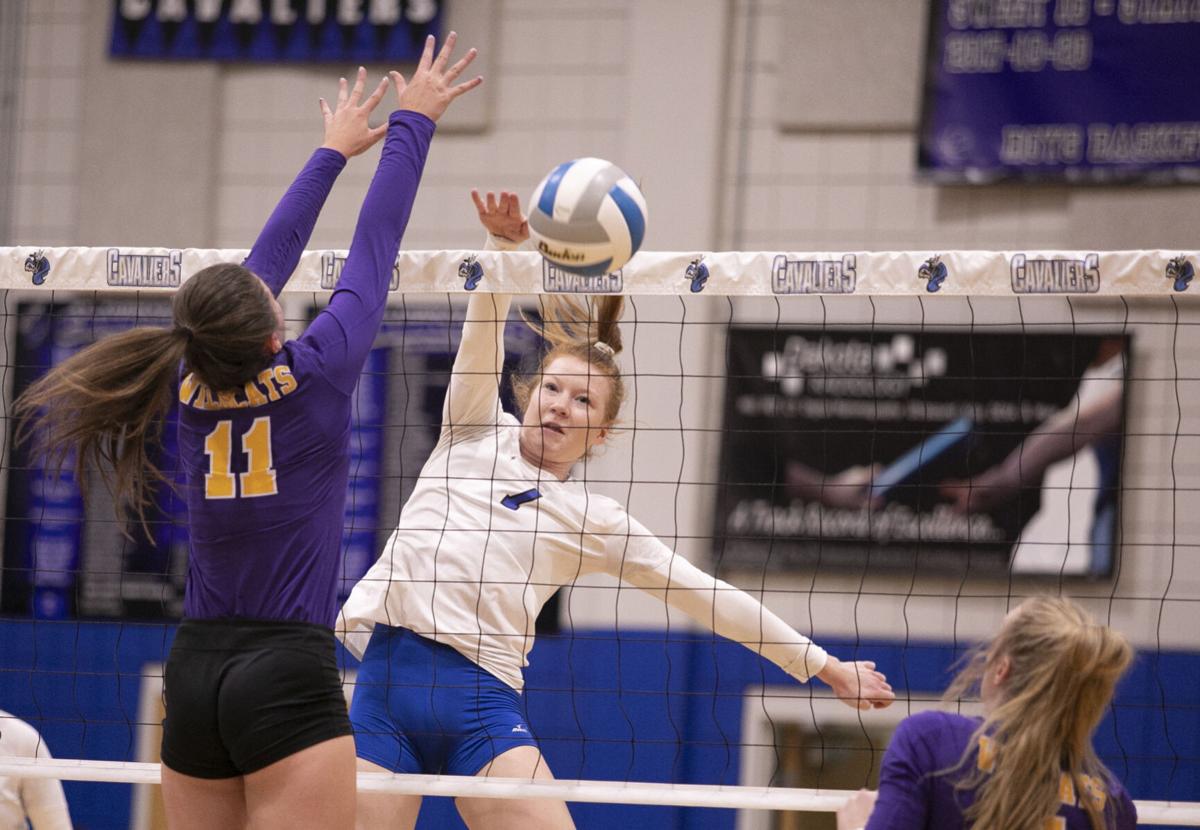 St. Thomas More senior outside hitter Haleigh Timmer tries to get a kill over Custer players on Tuesday at the STM Gym. 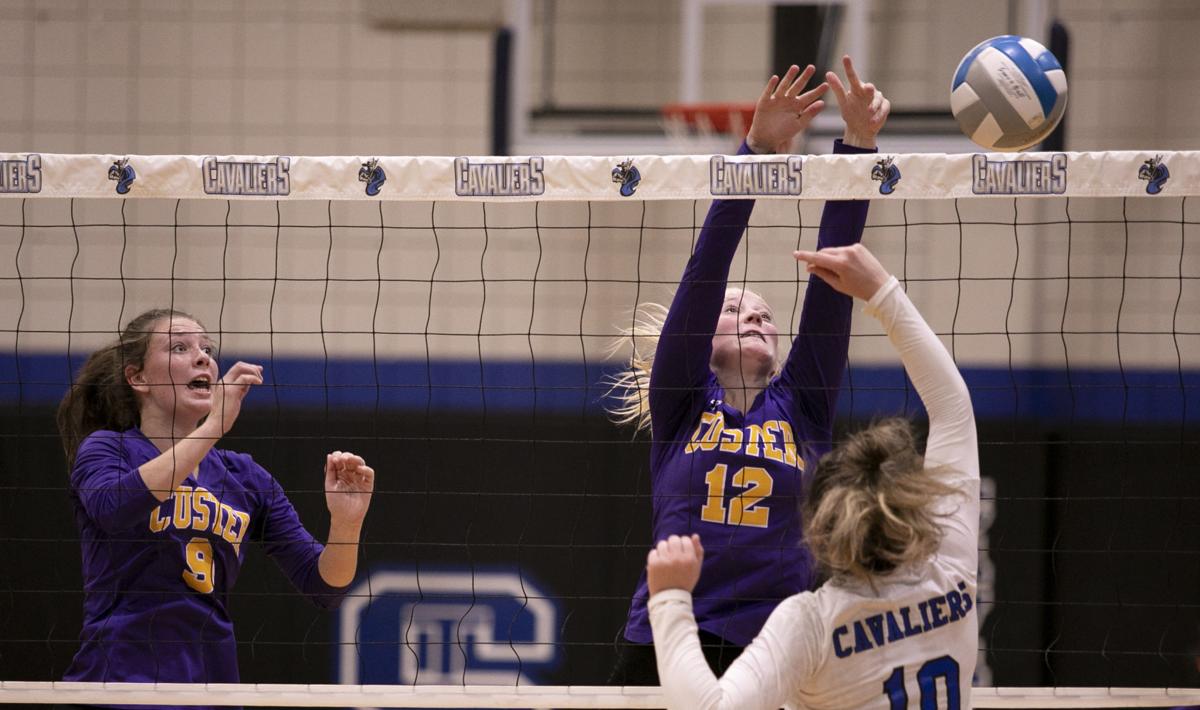 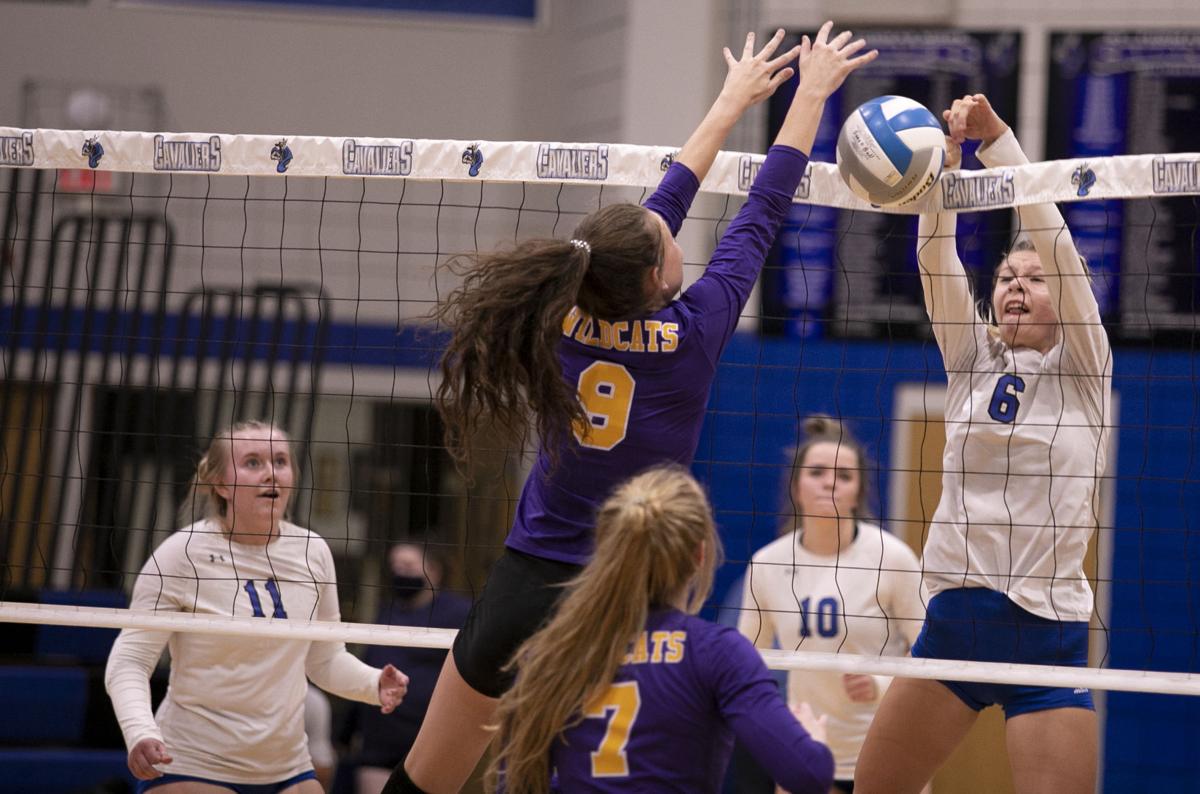 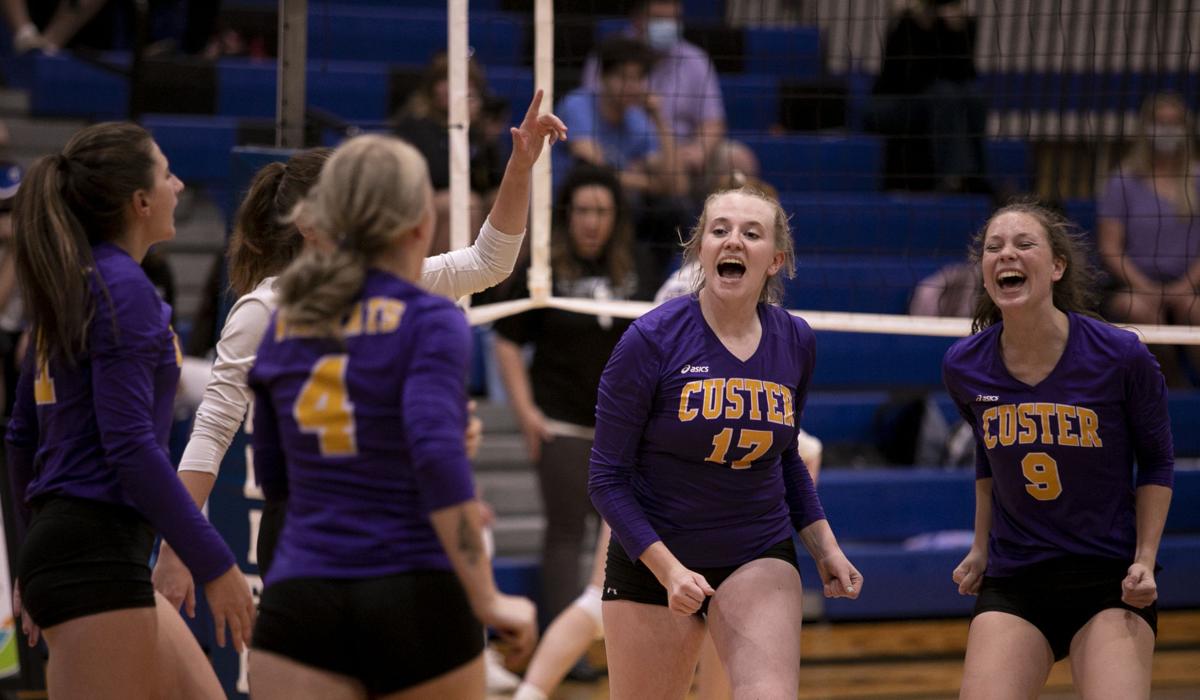 Custer seniors Laney Carlin (center) and Heidi Moore (right) celebrate with their team after scoring a point during the game against St. Thomas More Tuesday evening. 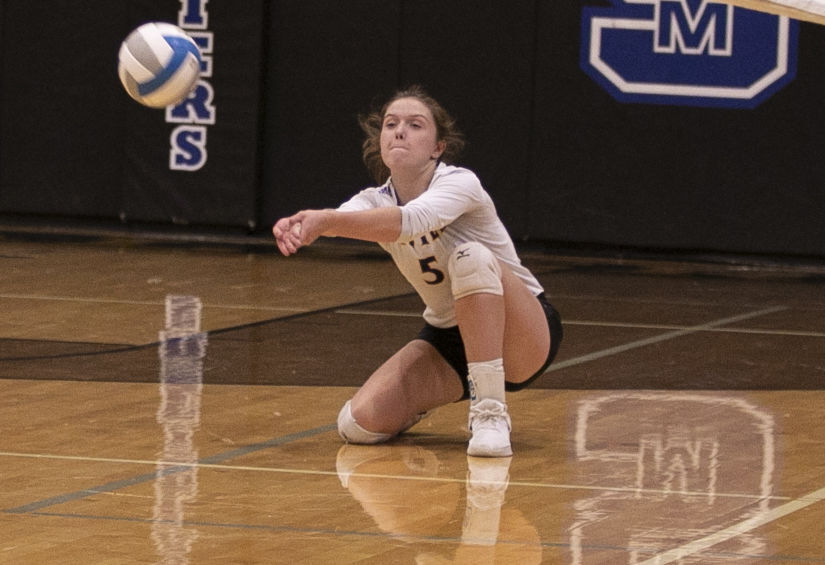 Custer senior libero Kaitlyn Spring makes a save during the game against St. Thomas More Tuesday.

Custer had rattled off five straight points and was one away from leveling its match with St. Thomas More for one set apiece.

The Cavaliers had other thoughts.

After Reese Ross saved the set point for the Cavaliers with a kill, a block by the Wildcats gave them a second opportunity to close it out. But two errors gave STM a set point, which it converted when a Mairin Duffy spike landed the ball on the hardwood.

With a two sets to none advantage, the Cavaliers fought off a resilient Custer squad to clinch the third game, and came away with a  25-16, 27-25, 25-20 victory at home Tuesday night in Region 8 volleyball action.

“Volleyball’s all about talking, and that’s a game changer,” St. Thomas More head coach Shannah Loeffen said. “That’s all we had to do; just talk as a team and work hard to get the win.”

Ross finished with a match-high 11 kills and added two blocks and one ace for the 6-3 Cavaliers. Haleigh Timmer earned eight kills and two blocks, while Sophia Janssen collected three kills, one block and one ace. Duffy also chipped in four kills.

Laney Carlin led Custer with six kills. Heidi Moore and Sydney Gaulke each picked up five kills, while Gaulke added two aces and a block. Allie Cass had three kills and two aces for the Wildcats, who dropped to 5-5 on the season.

“It’s frustrating because we do not feel like we came out and played to our potential and our ability tonight,” Custer coach Miranda Jaure said. “We are looking forward to another game with STM this season. Hopefully we’re a little more prepared. We looked just a little slow, a little sluggish on the court tonight. Overall, we’re happy with how the girls played, but we know we can play a lot better.”

Leading 10-8 in the opening set, back-to-back kills by Janssen and Ross helped STM create space from its opponent, but Custer came right back with five straight points, thanks to two kills from Gaulke, to get within one.

But the Wildcats never managed to grab a lead in the first, as the Cavaliers went on a 9-0 run up 15-14 to close it out.

The second set proved to be a different story as Custer took the first four points and rode out to a 12-7 advantage. St. Thomas More made its move after a kill by Ross, and a solo block by Timmer capped off a 6-0 run to turn the lead back over to the Cavaliers at 13-12.

The Wildcats didn’t falter, however, and down 23-19 they strung together five points in a row with the help of an ace from Cass to earn a set point.

Ross’ kill evened the set at 24-24, but Custer had another chance to win it after blocking an STM kill attempt, but two hitting errors, including a spike that sailed just long, handed the Cavaliers the serve, and they converted on their first set point for a 27-25 win.

After the Wildcats took an early 4-1 advantage in the third, St. Thomas More came roaring back to tie the set 7-7 before Janssen, Ross, Timmer and Duffy collected kills on an 8-0 run. Gaulke and Carlin’s block helped Custer get back within five, but its deficit proved too large as Ross made two kills and a block on her team’s final seven points to finish off the match.

“I think that this one was a little more competitive,” Loeffen said. “(Custer) had some players that we couldn’t stop, so it was nice to have that competition.”

St. Thomas More senior outside hitter Haleigh Timmer tries to get a kill over Custer players on Tuesday at the STM Gym.

Custer seniors Laney Carlin (center) and Heidi Moore (right) celebrate with their team after scoring a point during the game against St. Thomas More Tuesday evening.

Custer senior libero Kaitlyn Spring makes a save during the game against St. Thomas More Tuesday.