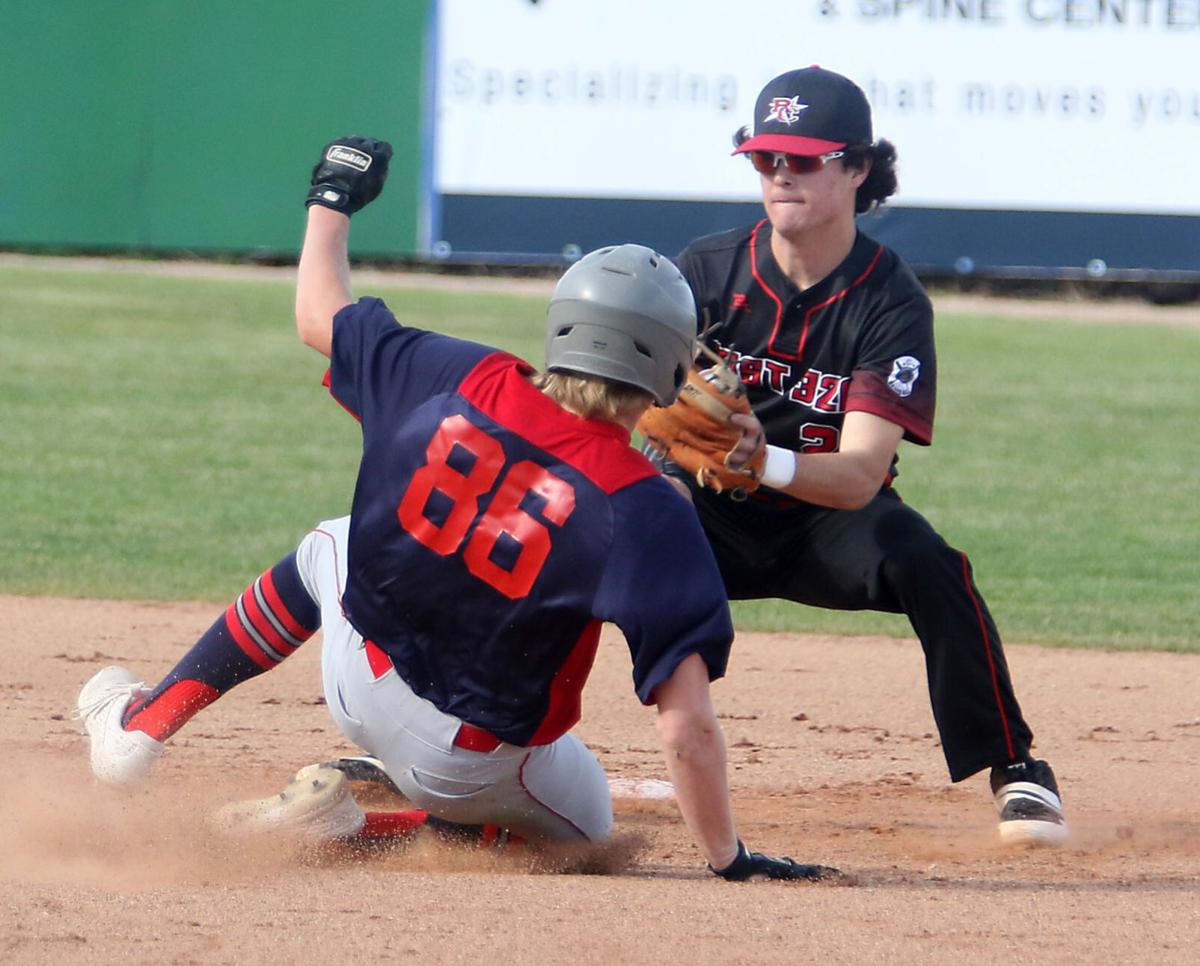 Post 320 shortstop Gage Darrow applies the tag on a strikeout-throw out double play in the first inning of the Stars' 9-1 win over Miles City Saturday afternoon. 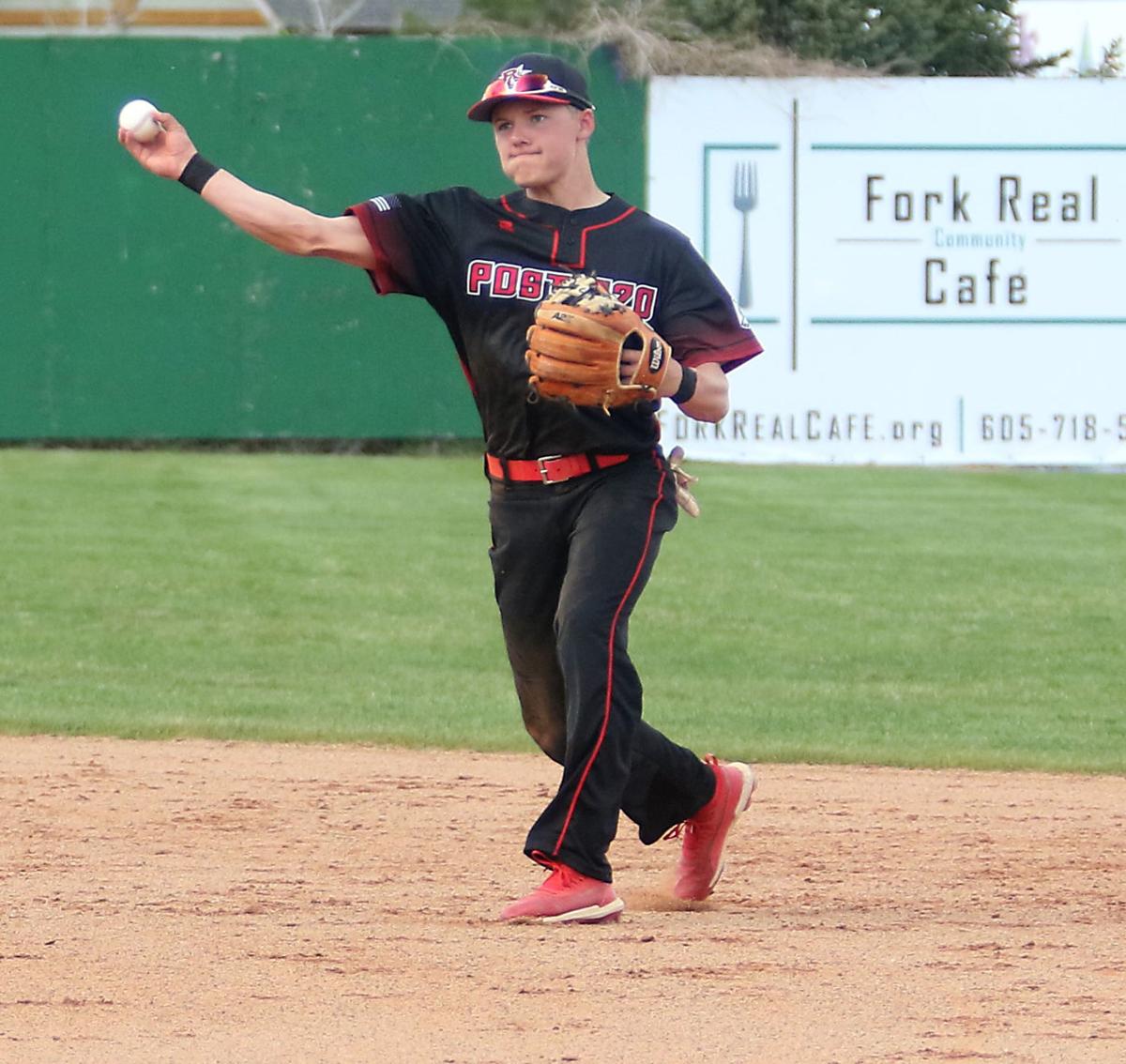 Post 320 center fielder Lane Darrow slides across the plate on a sacrifice fly by his brother Gage Darrow in the third inning of the Stars' 9-1 win over Miles City Saturday.

The Stars had the upper hand in the opener with a 9-1 victory, before the Outlaws scored six times to open the second game and rolled to a 10-2 victory.

The loss was the first of the season for the Stars in five games.

As has been the case all season, the first game started a little slow for Post 320 offensively, although it led 3-0 through four innings.

The Stars put the game away with three runs in the fifth and three more in the sixth.

Miles City struggled defensively early as Post 320 scored a run off of a ground ball error in the first inning. Bryan Roselles brought home Peyton Ness in the second inning on a sacrifice fly and Lane Darrow scored from third on a sac fly by Gage Darrow.

The Stars scored in the fifth inning on a throwing error to make it 4-0 and added two more runs in the inning on a two-run double by Jett Wetzler.

In the sixth inning, Lane Darrow picked up a two-run triple and he scored on a single by Gage Darrow.

Lane Darrow had another big game offensively, with three hits, scoring four runs and knocking in a pair. Roselles had two hits, while Gage Darrow and Jett Wetzler drove home two runs each.

James Rogers picked up the win on the mound with an outstanding effort, stopping the Outlaws on five hits and the one run in six innings. Brady Fallon pitched a scoreless inning, striking out two.

Chandler Smith had two hits for the Outlaws and Kade Mosley drove in their lone run.

The second game was a different story than from the first, as the Outlaws were in control from start to finish.

Miles City scores six runs on just three hits in the first inning, taking advantage of five walks by Ness, who got just two outs in the game.

Smith and Trae Aubrey had RBI singles and Hurr a RBI double for the Outlaws, who also added two runs on wild pitches.

Post 320 looked as if it was going to come back with a RBI single by Gage Darrow in the bottom of the first and had two runners on base with one out, but couldn't get them to home plate.

Mosely shut down the Stars the rest of the way as he picked up the win, scattering five hits in five innings, striking out six.

Miles City, 10-3, added two runs in the fourth and two more in the sixth.

Smith, Hurr and Raymond Shawyer all had two hits for the Outlaws, with Hurr driving in three runs.

Gavyn Dansby had two hits to pace the Stars as Gage Darrow and Isaac Dike added one RBI each.

Hardhats open with split in Cheyenne

The Rapid City Post 22 Hardhats played the first two of 17 straight games on the road to begin the season and split with Cheyenne Post 6 Saturday night in Cheyenne, Wyo.

Behind strong pitching from Jake Goble, the Hardhats opened with a 10-5 win over the Sixers, but struggled in the second game, falling to Post 6 11-0 in five innings.

In the opener, Goble gave up just two hits in three scoreless innings, striking out six.

The Post 22 offense backed him up and later put the game away with a five-run sixth inning.

The Hardhats scored twice in the second inning on a two-run double by Hayden Holec and made it 3-0 in the third on a solo home run by Bransen Kuehl.

Post 22 made it 5-1 on a two-run triple by Peyton Tipton, and after Cheyenne scored twice to make it 5-3, the Hardhats responded with the five-run sixth on a RBI single by Blake Weaver, a run-scoring sac fly by Kuehl, an unearned run on an error and two runs on passed balls.

Kuehl had two hits and two RBI for the Hardhats, who finished with nine hits. Tipton and Holec also drove home two runs.

Fisher Brown had two hits and three RBI for the Sixers, with Dominic Lopez and Mason Tafoya adding two hits each.

In relief, Weaver gave up four runs on four hits in three innings and Bryan Atkinson gave up one run on two hits in one inning.

Lee Negebauer gave up seven runs (five earned) on four hits in one inning as he walked two and struck out two.

The Sixers, 10-3, put the game away with a seven-run fourth inning.

Post 22's bats were silent against Post 6 starting pitcher Bradley Feezer, as Goble's second-inning single was the lone hit for the Hardhats. Feezer walked just one batter and struck out 11.

Cheyenne had just six hits, but they were big hits as Zack Costopoulos had a double and a triple and drove home two runs, while Tafoya also had two hits. Post 6 had six players with an RBI in the five-inning contest.

"COVID has caused some hard divide between people, and hopefully maybe this will be the first step in the process of us all coming together and working together for what we all know is important, and that’s our kids and our community.”

A 67-year-old Custer man has been identified as the person who died Wednesday night in a one-vehicle crash south of Pringle.

'How can we feel safe?': Uyghur on Chinese government policy

Post 320 shortstop Gage Darrow applies the tag on a strikeout-throw out double play in the first inning of the Stars' 9-1 win over Miles City Saturday afternoon.

Post 320 center fielder Lane Darrow slides across the plate on a sacrifice fly by his brother Gage Darrow in the third inning of the Stars' 9-1 win over Miles City Saturday.