A non-profit organization has filed a lawsuit against the South Dakota National Guard and United States Army alleging Freedom of Information Act violations.

Noah Bookbinder, president of Citizens for Responsibility and Ethics in Washington (CREW), said his organization requested records from the South Dakota National Guard and Gov. Kristi Noem’s office July 6 regarding the guard’s deployment to the United States-Mexico border.

Noem accepted $1 million from billionaire Republican donor Willis Johnson to deploy the National Guard troops to the border in June. Maj. Gen. Jeffery Marlette, head of the South Dakota National Guard, said in July that he wasn’t aware of the funding until after the mission was planned.

“When you have a wealthy person putting up money to send National Guard troops somewhere, it really raises questions of is that person who doesn’t represent the people — he’s not in government, he’s not even from South Dakota — are they trying to get something for themselves?” Bookbinder said. “Was this being done for Gov. Noem’s political advancement or was she promising something to the donor in exchange for him putting up the money? It really raises a lot of questions about whose interests are being served.”

He said people don’t want a system where governors are renting out the National Guard for private interests, or other aspects of the military being privately funded for political purposes.

“It really is problematic and dangerous if that starts to become the norm,” Bookbinder said. “It was important to us to find out everything we could about what was being done and why in order to inform the people of South Dakota, the people of the country, and if there’s anything being done here that’s problematic, to give people the chance to stop it from happening in the future.”

CREW, which is based in Washington, D.C., requested all records relating to the donation, communications with Johnson and the governor’s office regarding the donation and deployment from the South Dakota National Guard.

According to the lawsuit, the South Dakota National Guard refused to process the request, saying it didn’t meet the Freedom of Information Act guidelines because “the records relate solely to the agency’s state functions.” The letter was dated Aug. 26 and transmitted via email Sept. 10, according to the lawsuit. 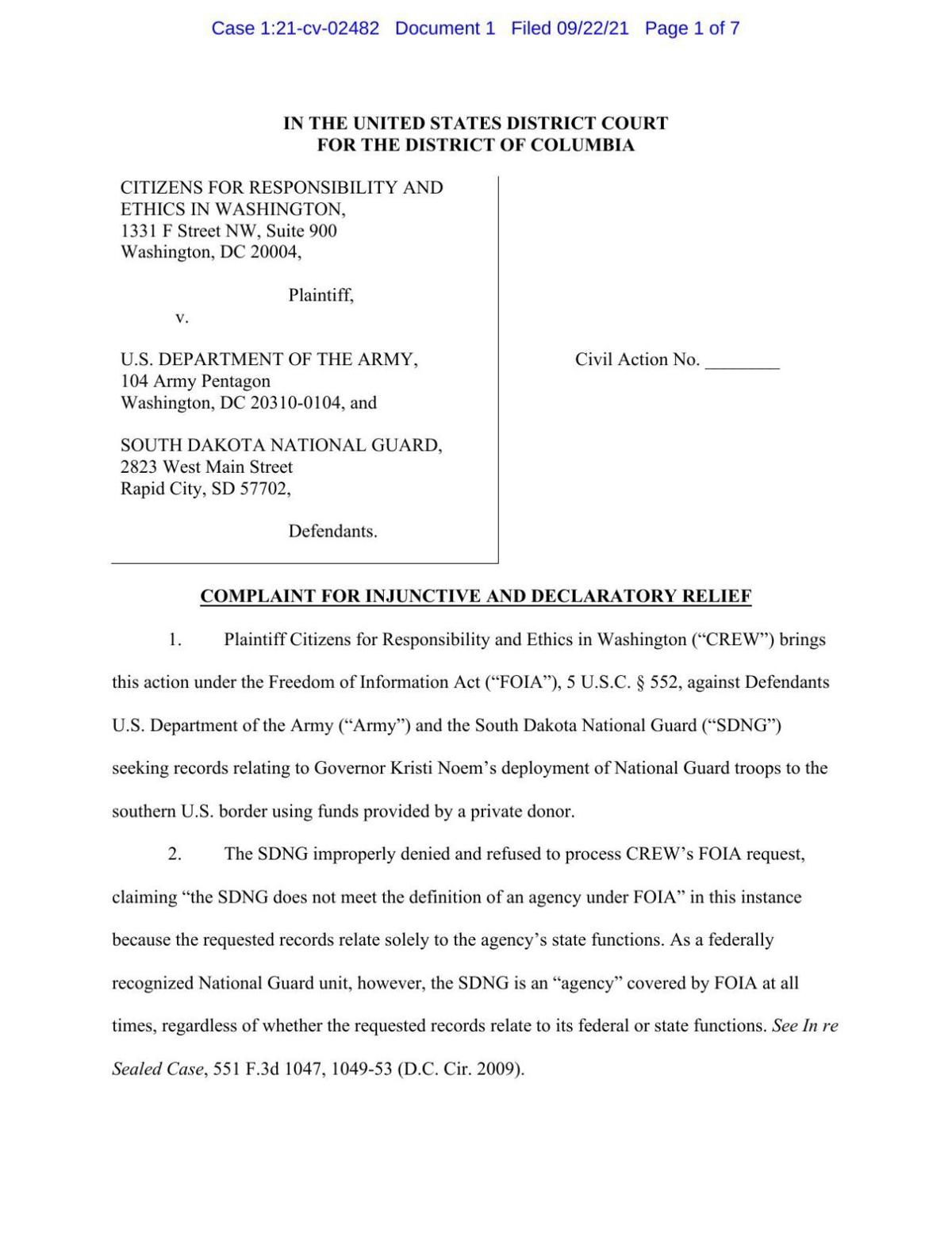 Bookbinder said the act applies to federal agencies and is based on the idea that U.S. citizens need to know what the government is doing and why.

“As we look at it, the National Guard is clearly a federal agency and needs to turn over the records,” he said. “Their claim was that it was for state purposes, not federal, and certainly as we see it, that’s not how the law works.”

The lawsuit states CREW is seeking an injunctive relief requiring the South Dakota National Guard to process and release the records, along with a declaratory judgment that it is a Freedom of Information Act-covered agency and failing to fulfill the requested records is a violation of the act.

Ian Fury, communications director for Gov. Noem’s office, said in an email that the office follows open records law and would not comment on ongoing litigation.

Bookbinder said CREW has not received a response from Noem’s office.

He said with Noem’s name in headlines recently regarding allegedly using her position to get her daughter's appraisal license approved raises the stakes for the question of the use of private funds for the National Guard.

“Was this another instance where Gov. Noem was using government resources for her own private interests or for somebody else’s private interests?” Bookbinder said. “It makes it really important for us to get to the bottom of what was happening there.”

Attorney General Jason Ravnsborg also referred a request for an investigation into Noem’s alleged misuse of the state airplane to the Government Accountability Board Oct. 1.

Bookbinder said that could potentially show a pattern of misusing government for private interests.

“Obviously with all of these we need to get the full facts before we can say for sure what happened, but I think it means we’re less likely to give the benefit of the doubt to that kind of arrangement,” he said.

The South Dakota National Guard has until Oct. 30 to respond to CREW’s lawsuit.