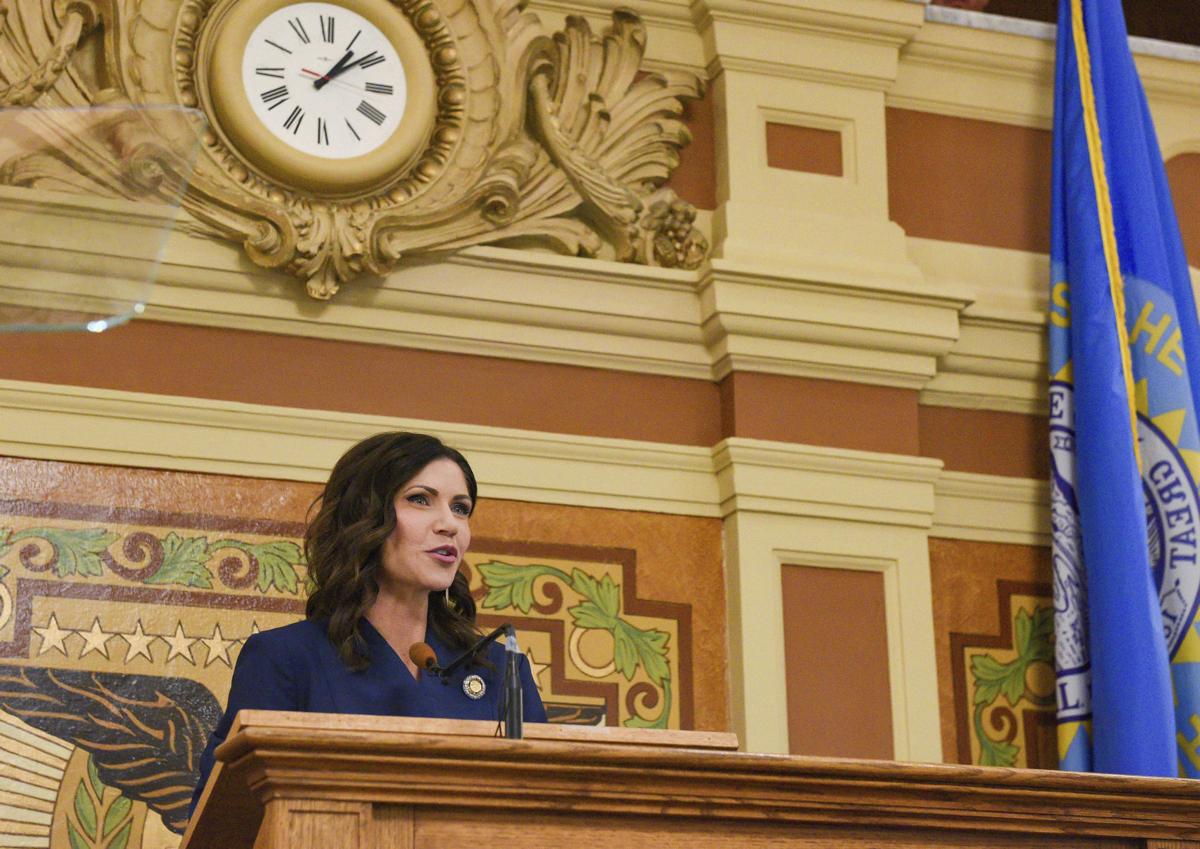 PIERRE | South Dakota Gov. Kristi Noem on Tuesday used her State of the State address to return to themes that have marked her two years in office, touting the state's economy, focusing on job development, and unveiling a proposal to ban abortions based on a Down Syndrome diagnosis.

The Republican governor has become a rising figure among conservatives nationwide since she last stood before the Legislature to deliver the annual address a year ago, carving out a reputation for her hands-off approach to the pandemic. She defended that strategy to lawmakers, pointing out that the state's economy has weathered the pandemic relatively well. Thanks to a windfall of federal coronavirus aid, the state has over $250 million in one-time funds to put towards projects like broadband and college scholarships.

Noem's proposal to ban abortions motivated by a Down Syndrome diagnosis is likely to further endear her to conservatives, both within South Dakota and nationwide. Republican legislative leaders said they have not been able to review the bill banning the abortions, but predicted it would sail through the House and Senate. Noem's office has not yet introduced the bill and declined to explain how the proposed law would determine whether the abortion is motivated by a Down Syndrome diagnosis.

“For those who have had the privilege of knowing someone with Down Syndrome, you know that person ends up being a gift to all of us,” she said.

Even Democratic legislative leaders, who have seen their numbers dwindle in the Capitol, acknowledged their caucus was not likely to present a full-fledged opposition to Noem's abortion bill.

“South Dakota is already extremely restrictive in abortion, and if the legislation is redundant or if it's already not possible in this state, then I don't know why we would need this bill,” said Senate Minority Leader Troy Heinert, a Democrat from Mission, adding that he would be examining the bill and polling fellow Democrats.

Noem billed herself as a “family-first governor," tying that theme into attracting new business projects to the state, pushing for broadband internet expansion projects and new school curriculae that will teach American history and civics.

“I believe that we can create an environment where families are not forced to choose between the modern economy on the one hand and then life in their hometown on the other,” Noem said.

Her administration has come up with roughly $250 million in one-time funds as it used federal coronavirus relief aid to offset state expenses tied to the pandemic. She would like $100 million to go towards expanding broadband internet access and another $50 million to an endowment for scholarships for South Dakota college students.

First Premier Bank and T. Denny Sanford, a South Dakota philanthropist, have donated $50 million to the fund and plan to make another $50 million donation. Noem is hoping to build the endowment to $200 million to generate scholarship funds, which would come with the contingency that scholarship recipients stay in the state for three years after graduation.

“I think we'll be able to look back and say in 20 years, what we did in 2021 was something transformational,” said House Majority Leader Kent Peterson, a Salem Republican.

Noem's address was mostly forward-looking as the governor described 2020 “as one for the history books.” The governor's speeches last year started with a moment of silence for those lost to COVID-19, but on Tuesday, she said there is a “light at the end of the tunnel” with the state leading the country in its rate of vaccinations against the disease.

But for the moment, the realities of the pandemic are still affecting the Legislature. One lawmaker was away from the Capitol with an infection. Though the House had posted signs encouraging masks, many Republicans crowded into the chamber floor without wearing them.

Peterson acknowledged that the state saw some of the worst virus numbers in the country during November, but praised Noem's overall approach to the pandemic.

“I'm hopeful that we've gotten through the worst of it here in South Dakota,” he said. “But one of the things you can't fault her on with the decisions that she made was how it affected our economy.”

ARLINGTON, S.D. (AP) — A man and child have died after an ATV fell through the ice in eastern South Dakota over the weekend.

PIERRE | Sen. Mike Rounds said Thursday he believes the impeachment trial of President Donald Trump is moot, signaling that he wanted the Sena…

Despite the FBI on Monday warning of plans for armed protests at all 50 state capitals in the coming days, South Dakota lawmakers in Pierre ar…

SIOUX FALLS, S.D. (AP) — Despite the FBI on Monday warning of plans for armed protests at all 50 state capitals in the coming days, South Dako…

PIERRE, S.D. (AP) — A pro-Trump Christian group has a permit to gather at the South Dakota Capitol in Pierre Sunday.

Rep. Dusty Johnson was one of 197 Republican House members who voted Wednesday not to impeach President Donald Trump.

Rep. Dusty Johnson was one of 197 Republican House members who voted Wednesday not to impeach President Donald Trump.

PIERRE, S.D. (AP) — South Dakota is looking to build on one of the nation's fastest COVID-19 vaccinations rollouts so far by making vaccines a…

PIERRE, S.D. (AP) — South Dakota Gov. Kristi Noem on Tuesday used her State of the State address to return to themes that have marked her two …