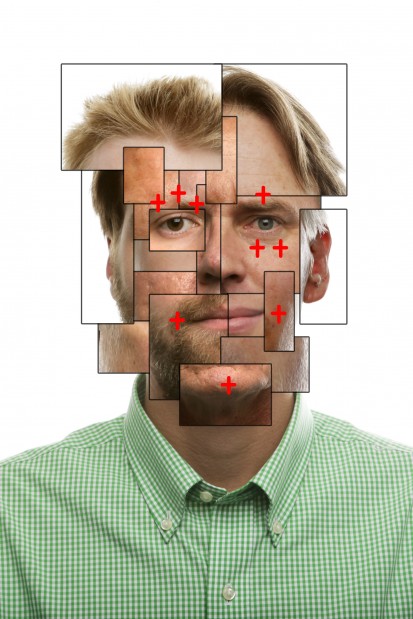 South Dakota is one of 26 states where law enforcement can use facial recognition technology to search driver's license databases. It's considered a great tool for law enforcement: now an old mug shot or police surveillance photo can be compared to all 603,000 faces in the state's database to see if there's a match. 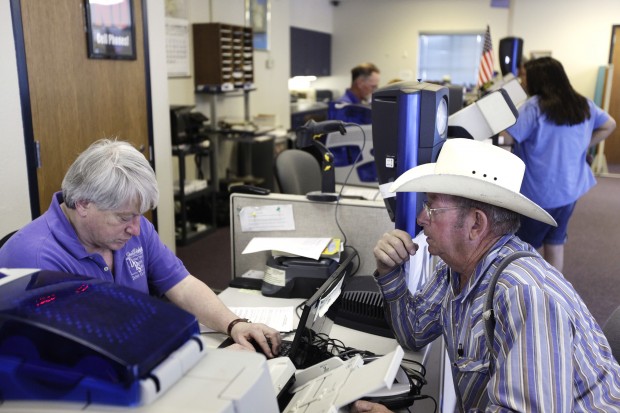 Steve Vevig, left, helps Jerry Teller get his commercial license renewed at the Public Safety Driver Exam Station in Rapid City. South Dakota is one of 26 states where law enforcement can use facial recognition technology to search driver's license databases. 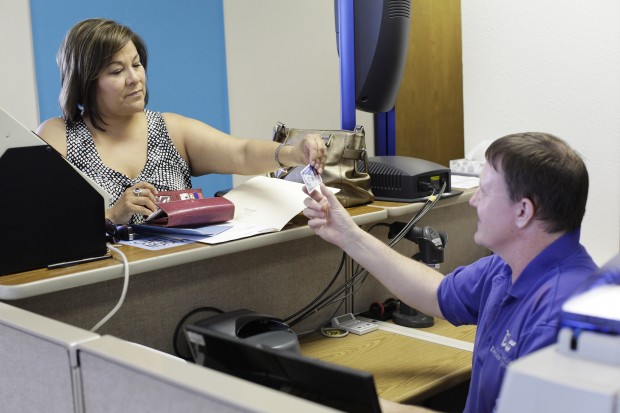 Lila Mehlhaft gets her license renewed with David Stackenwalt's help at the Department of Public Safety's Driver Exam Station in Rapid City.

What Thompson, a 45-year-old fencing contractor, didn’t know was that his new license photo will join a database of roughly 600,000 South Dakotans that can now be searched by law enforcement agencies.

South Dakota is one of 26 states where law enforcement can use facial recognition technology to search driver’s license databases. It’s considered a powerful tool for law enforcement: now an old mug shot or police surveillance photo can be compared to all 603,000 faces in the state’s database to see if there’s a match.

But the brave new world of identification is also ushering in a host of questions, concerns and possible constitutional conflicts.

“When you can connect a random person down the street with a name, you can connect them to their online activity,” said Amie Stepanovich, director of Domestic Surveillance Project, Electronic Privacy Information Center. “The whole really is the greater than the sum of its parts.”

Multiple South Dakota lawmakers contacted last week by the Journal were not aware of either the state's facial recognition system or law enforcement's ability to search it.

The facial recognition system was added in 2010 to help catch residents applying for driver’s licenses under fraudulent identities, according to state Driver’s License Program Manager Cindy Gerber. The software cost $600,000 and was paid for by federal grant money. Since then, it has caught 15 instances of fraud, according to Gerber.

Law enforcement has requested facial recognition searches on the database at least seven times, according to Gerber.

Two of those were by the U.S. Department of State’s Diplomatic Security Service. Five more came from South Dakota’s Fusion Center, an office created after the Sept. 11, 2001, attacks to increase intelligence sharing between local, state and federal law enforcement in terrorism cases.

Gerber says the database — and how the state uses facial recognition photos — is tightly controlled. Only requests concerning active investigations are approved, according to Gerber, though search warrants aren't necessary. The request is approved by Gerber’s office in Pierre, and the search itself will be made by only a handful of state employees, all of whom have had background checks.

“Our photo system is very secure,” she said.

The photos that law enforcement agencies have matched against the database have been either photos from a prior arrest or surveillance pictures, she said. Some of the photos, however, were not good enough quality for the system.

The photo database is purged occasionally to weed out old photos.

Others, however, believe a technology as new and sweeping as facial recognition isn't regulated enough.

“There's a serious potential for abuse unless law enforcement is given standards” on when and how searches can be conducted, said Hanni Fakhoury, a staff attorney with the non-profit Electronic Frontier Foundation.

Such scenarios could seem outlandish, but at least one large surveillance operation has already taken place on American soil. For several years during the last decade, the New York Police Department conducted extensive surveillance of Muslims and people of Arab heritage.

The department monitored and photographed people in the Muslim community at mosques, bookstores and restaurants. According to reports by The Associated Press, the “police subjected entire neighborhoods to surveillance and scrutiny, often because of the ethnicity of the residents, not because of any accusations of crimes.”

Since facial recognition is only now becoming widely used, there aren't many established legal guidelines for its use.

“In many instances, the law hasn’t kept up with surveillance technology at all,” Stepanovich said. "We don’t have laws [for] drones, facial recognition, GPS tracking.”

That case, U.S. v. Jones, centered on the 4th Amendment to the U.S. Constitution, which was designed to protect citizens against unreasonable search and seizure by government agents. Any questions over facial recognition systems will likely be debated over the 4th Amendment, too.

In states across the nation, lawmakers haven’t necessarily caught up with creating laws to govern or regulate surveillance tactics, either. A handful of states, like Minnesota and Oregon, have facial recognition systems but don’t allow law enforcement to use the systems, according to a Washington Post investigation. Some law enforcement agencies in Florida allow police to take head shots of detained suspects and can make facial recognition searches straight from their patrol cars.

The idea of using faces to identify people began in the 1960s, a decade full of forward-thinking ideas. Jet travel became widespread and America launched its historic missions to the moon.

At Tokyo University during those years, a researcher named Takeo Kanade began to search for ways to identify people by their facial features. He measured the distances of features, the corners of the eyes, mouth, and nose, 13 in all, to establish a pattern.

“That was a more geometry-based approach,” said Dr. Xiaoming Liu, an assistant professor in the computer science and engineering department at Michigan State University.

In the decades since, the technology has morphed to a more sophisticated approach called appearance-based facial recognition, according to Liu.

Newer systems are able to handle the changes people make to themselves — growing or shaving a beard, wearing glasses — though not perfectly, he said. And larger changes like surgically changing a nose or chin can still fool facial recognition, he said.

The photos that work best, according to Liu, are the ones where a subject faces directly toward the camera in good light, doesn’t smile or laugh. Photos compared at this quality have a recognition rate of around 98 percent, according to Liu.

The next generation of facial recognition, according to Liu, will be the ability to take surveillance photos from different angles and mash them together. It's a science that's already in development.

Already, the technology is becoming a potent tool for mass surveillance.

Facial recognition was given a very public trial run when it was used in 2001 to monitor people attending Super Bowl XXXV in Tampa, Fla. By matching up photos against a criminal database, police landed hits on 19 people wanted for petty crimes.

In 2011, researchers at Carnegie Mellon built a database of 25,000 Facebook photos and then went onto the school’s campus and asked students passing by to pose for a quick photo. Researchers were "able to identify 31% of students passing by with the help of facial recognition software,” according to an article in Mashable.

In fact, Facebook, with access to its users photos, has the world's largest facial recognition capabilities, according to Stepanovich. And the Federal Bureau of Investigation is developing a nationwide database to add facial recognition searches to its old fingerprint catalogs.

"You have it coming from both sides," Stepanovich said.

South Dakota's government didn't need approval by the Legislature to purchase or use its facial recognition system.

“We should at least have the debate as to whether or not we should have more controls,” Russell said.

He added that he would be open to considering legislation that would require law enforcement to secure a warrant to search the system.

Verchio said it could be useful to catch escaped convicts or others; Killer expressed concerns about possible civil liberties violations.

“It should be discussed openly before it gets implemented,” Killer said.

Down the road, those discussions might get local, too. Rapid City Police Department Chief Steve Allender said he "did preview facial recognition software at a conference last year and will do the same this fall again."

"I am interested in facial recognition capabilities for the future, although we have no plans to purchase in the coming few years at least," Allender wrote in an email.

Thompson, the fencing contractor, left the Rapid City driver’s license office last week with a renewed license. He also left with the knowledge that his photo was just one more head shot in a database that could someday match his face up against a suspect or person of interest in a virtual police lineup.

“That shouldn't be," he said. "Isn't that an infringement on our rights?"

South Dakota is one of 26 states where law enforcement can use facial recognition technology to search driver's license databases. It's considered a great tool for law enforcement: now an old mug shot or police surveillance photo can be compared to all 603,000 faces in the state's database to see if there's a match.

Steve Vevig, left, helps Jerry Teller get his commercial license renewed at the Public Safety Driver Exam Station in Rapid City. South Dakota is one of 26 states where law enforcement can use facial recognition technology to search driver's license databases.

Lila Mehlhaft gets her license renewed with David Stackenwalt's help at the Department of Public Safety's Driver Exam Station in Rapid City.