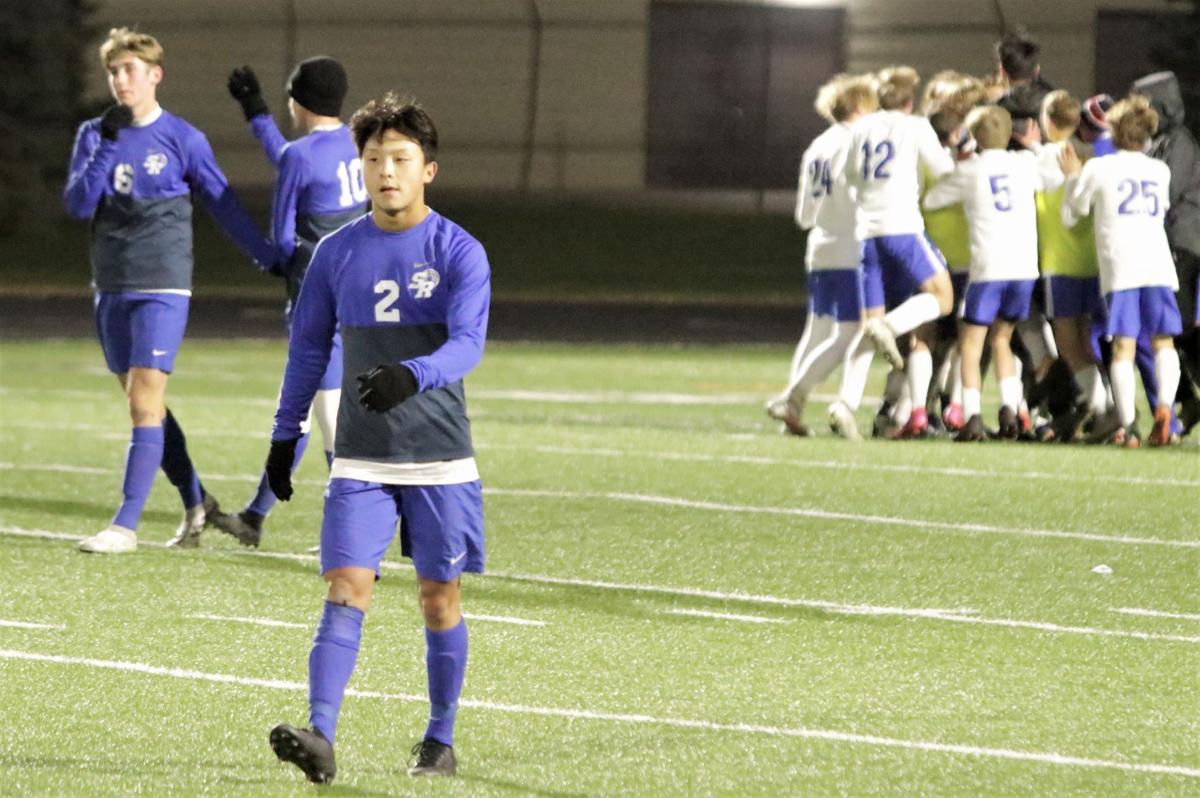 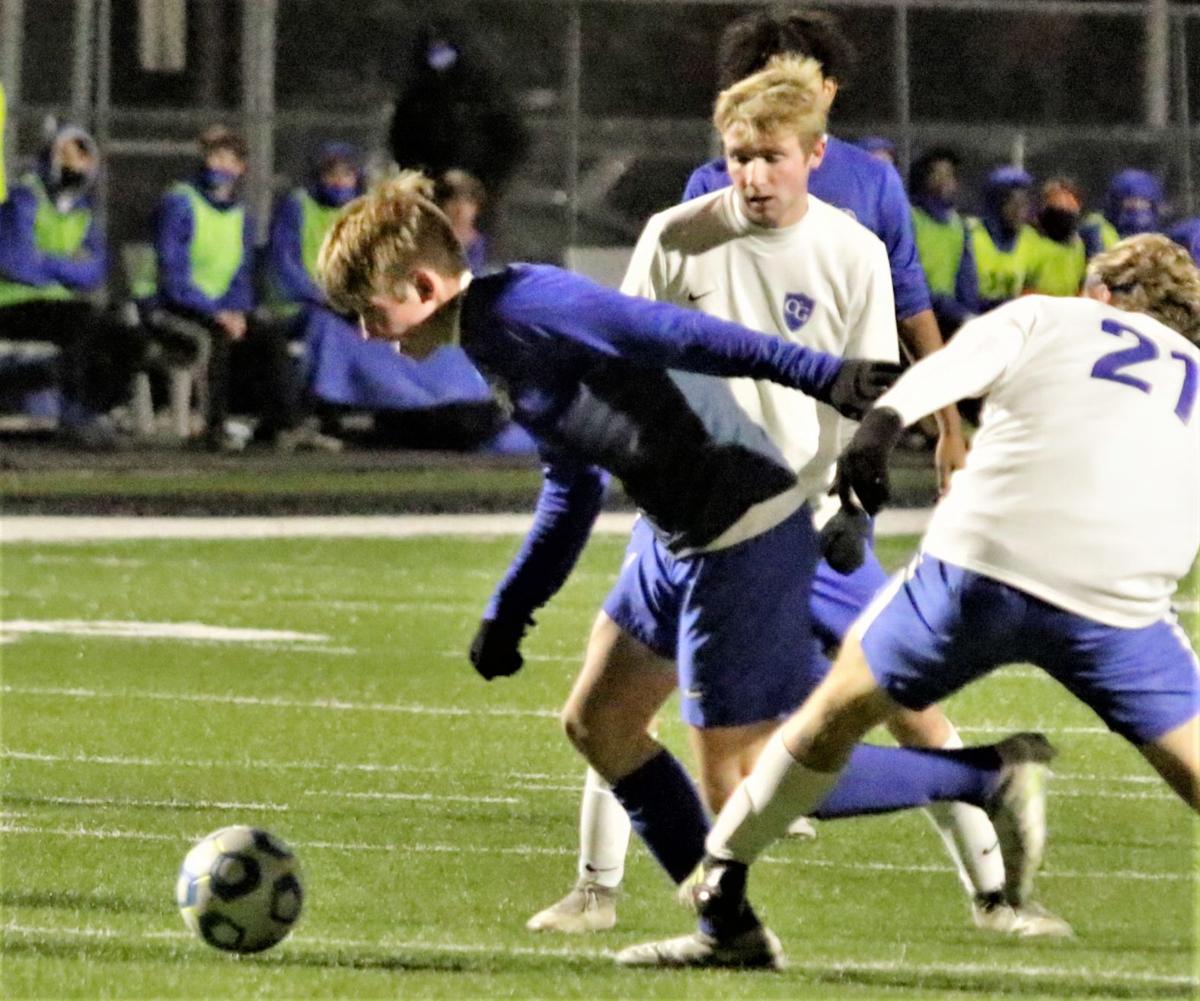 Rapid City Stevens striker Zack Williams tries to dribble the ball between two Sioux Falls O'Gorman defenders during the second half of the Raiders 2-1 loss to the Knights in the Class AA Boys Soccer State Championship game Saturday in Huron. 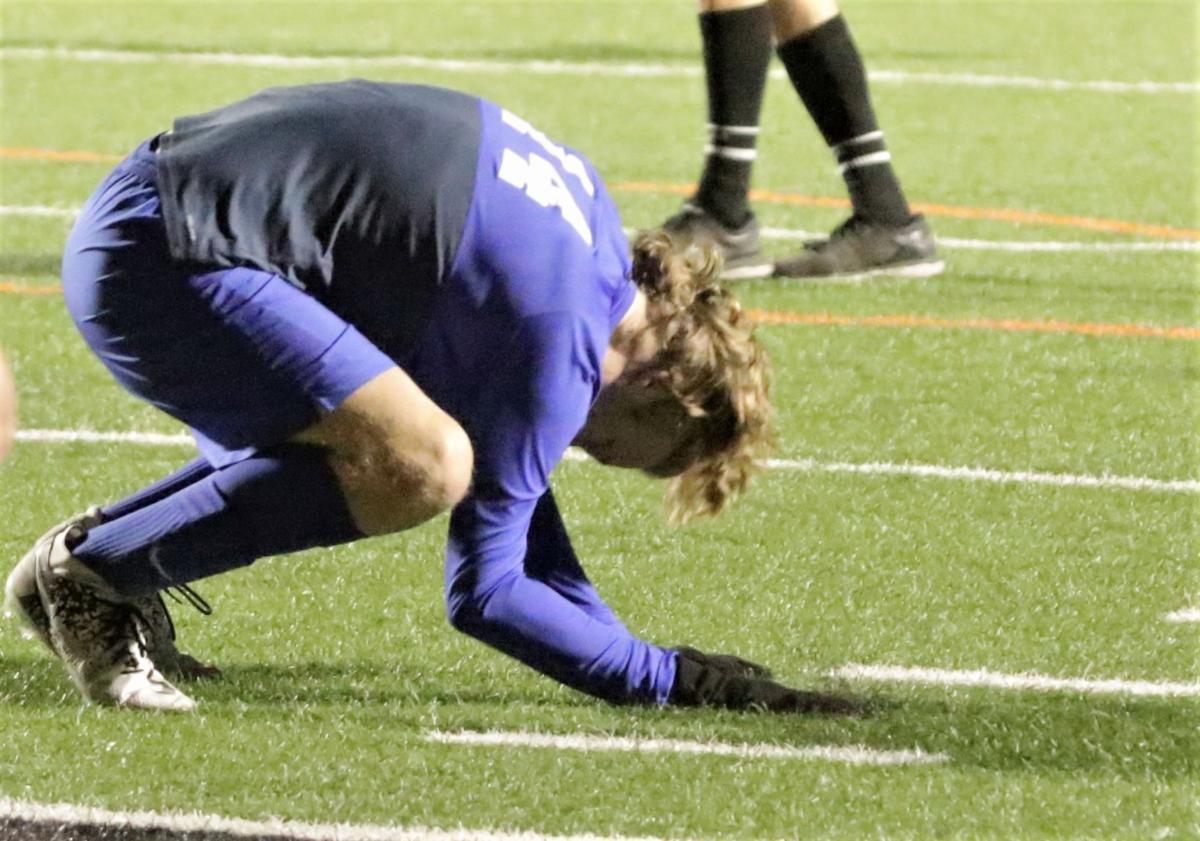 Rapid City Stevens forward Blake Middleton shows his frustration after his shot on goal was saved by the Sioux Falls O'Gorman goalkeeper during the Raiders 2-1 loss to the Knights in the Class AA Boys Soccer State Championship game Saturday in Huron.

HURON — The Rapid City Stevens boys' soccer team became a creature of habit this season, taking things one game at a time and sticking with routines before and after each contest.

Wins also became a habit for the top-seeded Raiders, who took an undefeated record into a meeting with No. 7 O’Gorman at the Class AA state championship Saturday.

It wound up being the day the habit was broken, as mistakes proved costly in a 2-1 defeat to a determined Knights squad, intent on finishing its Cinderella run.

“We made some mistakes tonight, and there are lessons to learn,” Stevens head coach Jeff Fierro said. “In life in general, sometimes no matter how hard you work at something or how much you prepare, the outcome isn’t what you hope it would be. The result doesn’t take anything away from these guys, as far as I’m concerned. Win or lose, we knew that we were going to walk away from this with some valuable lessons learned.”

The Raiders were first to gain a scoring opportunity, earning back-to-back corner kicks in the fifth minute. A header on the first one was tipped away, however, and the second was cleared by the Knights.

But just a minute later, Zack Williams hauled in a long pass and slipped a shot past the opposing goalkeeper from the left side of the net to give Stevens (13-1-1) and 1-0 advantage.

O’Gorman (10-4-3) picked up two of its own corners but failed to convert. The Raiders went back on the attack, where Blake Middleton and Sam Tschetter fired shots that sailed just wide and just over the net.

Following a cleared corner kick in the 39th minute, the Knights kept possession and leveled the match when Wesley Zimprich knocked in a goal off a deflection with 46.8 seconds left in the first half.

It was just the first shot on goal by O’Gorman all game.

“We had some trouble clearing the ball,” Fierro said of the goal. “Instead of being aggressive, we tried to finesse the ball out of there and they took advantage of that.”

Stevens, also with one shot on target to its name, was able to get two solid attempts at retaking the lead in the first 15 minutes of the second half. Both Devonte Parker and Levi Busching’s blistering shots were stopped by diving saves from the O’Gorman goalie.

In the 61st minute, a towering, arching ball off a free kick sailed into the box and was headed into the net by Patryk Zimprich to give the Knights the 2-1 lead, which stood at the final whistle.

“We started working for this season in the middle of June, worked hard every day, took a step forward every day. I cannot be more proud of these players,” senior midfielder Ross Moriarty said. “This season was so much fun, I’ve had so many great experiences. I’m just sad it had to end this way.”

After a red card forced them to compete with only nine players for the remaining 20 minutes of the match, the Raiders managed to put just one shot on goal as the Knights defense blocked a significant portion of their opponents’ attempts at an equalizer.

“Their adjustment was to bring numbers back, so there was just more traffic back there,” Fierro said of O’Gorman. “Hat’s off to them. They did a good job of stepping to our guys and not giving them much time to get the shots off.”

“I’m not really sure what decided it because I saw a lot of work from both teams, but I think we worked really hard. In the end, they just found the net,” he said. “But we worked hard the whole time, and it was just one of those things where you tried your hardest but can’t win.”

In their first and only loss of the 2020 campaign, the Raiders finished with 5 of 10 shots on goal, allowing 4 of 9 from the Knights.

“I’m frustrated for sure, but proud as well. It’s a bittersweet moment,” Fierro said. “That was an amazing season, it was a memorable season and that is a team that I will not forget.”

A 24-year-old Sturgis woman has been identified as the person who died early Saturday morning in a one-vehicle crash west of Whitewood.

Civic Center Director Craig Baltzer said he knew the former owners of the Rush were in serious financial trouble in 2017, but the extent of ci…

A tribute to our neighbors: Remembering South Dakotans who died of COVID-19

Rapid City Stevens striker Zack Williams tries to dribble the ball between two Sioux Falls O'Gorman defenders during the second half of the Raiders 2-1 loss to the Knights in the Class AA Boys Soccer State Championship game Saturday in Huron.

Rapid City Stevens forward Blake Middleton shows his frustration after his shot on goal was saved by the Sioux Falls O'Gorman goalkeeper during the Raiders 2-1 loss to the Knights in the Class AA Boys Soccer State Championship game Saturday in Huron.