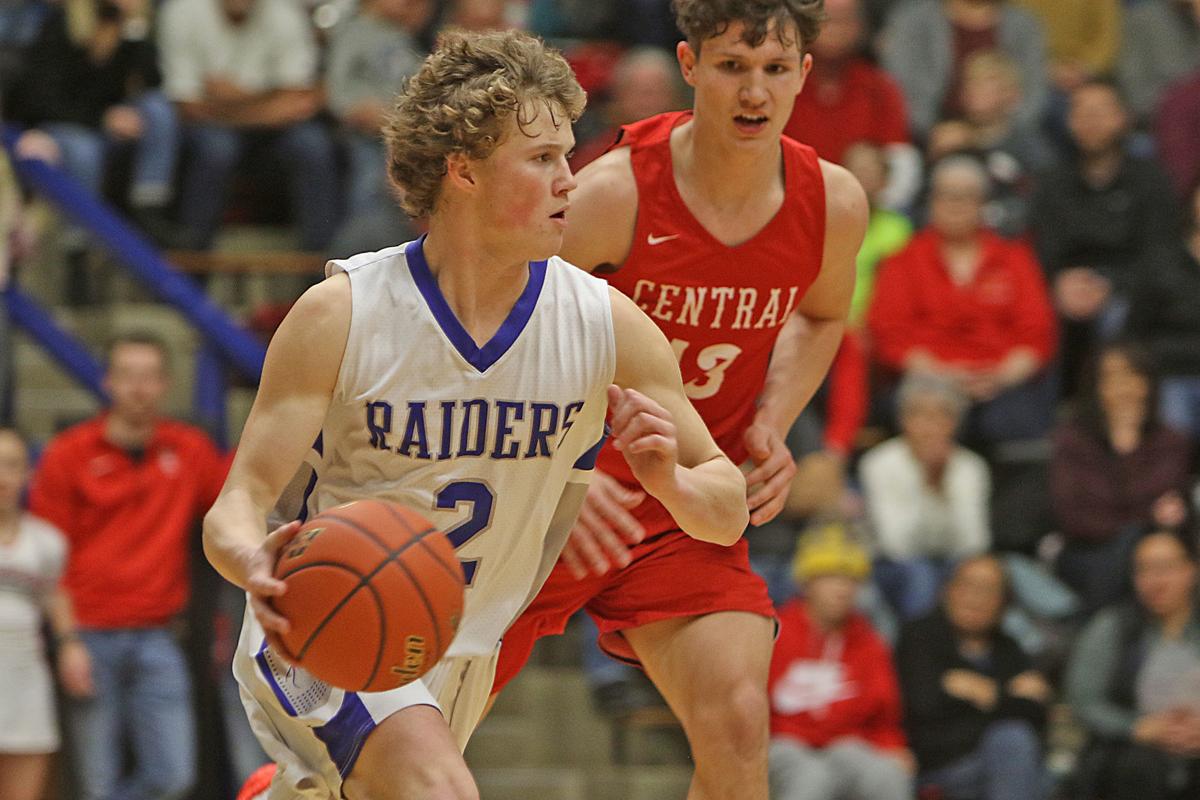 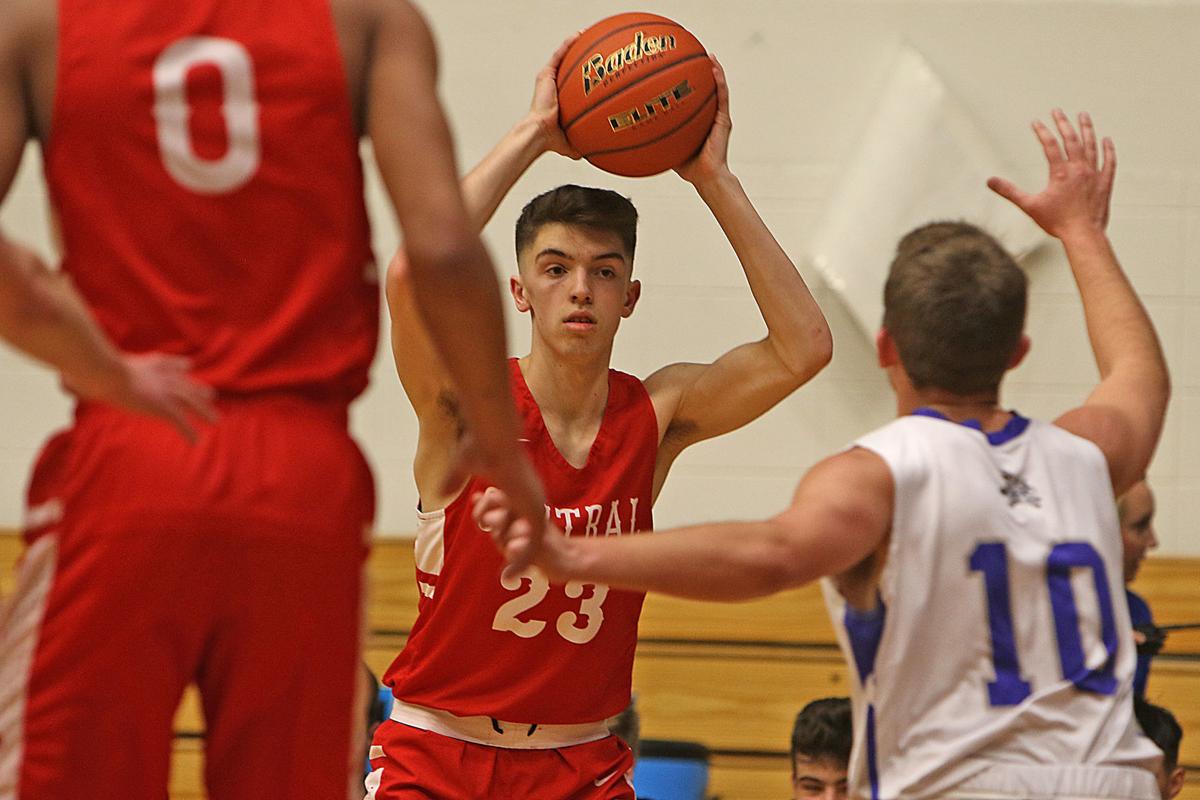 Rapid City Central guard Taegen Wells (23) looks to pass the ball into the lane to a teammate while Blake Weaver (10) of Rapid City Stevens defends during their high school boys basketball game Friday at Heier Gymnasium. 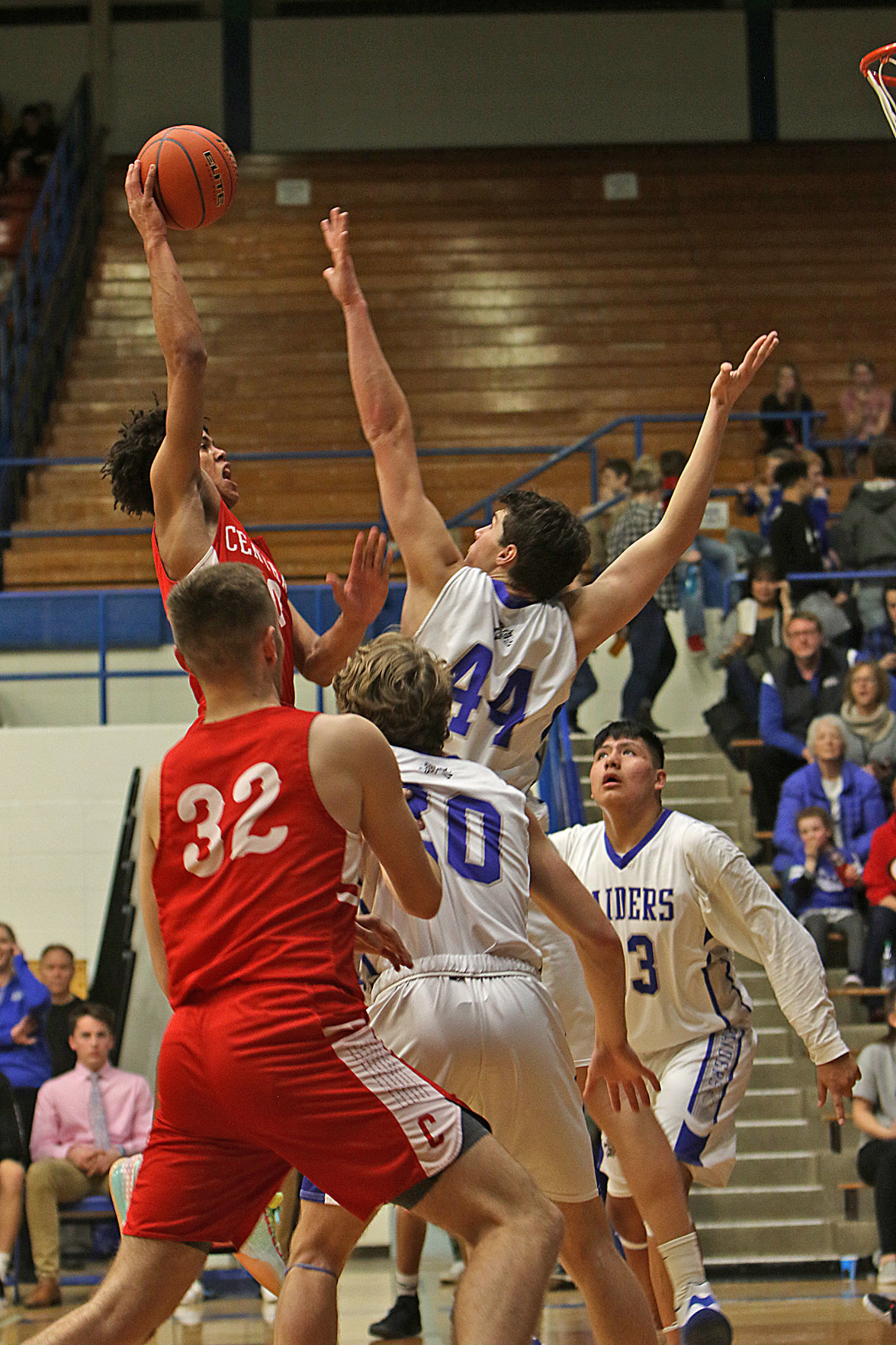 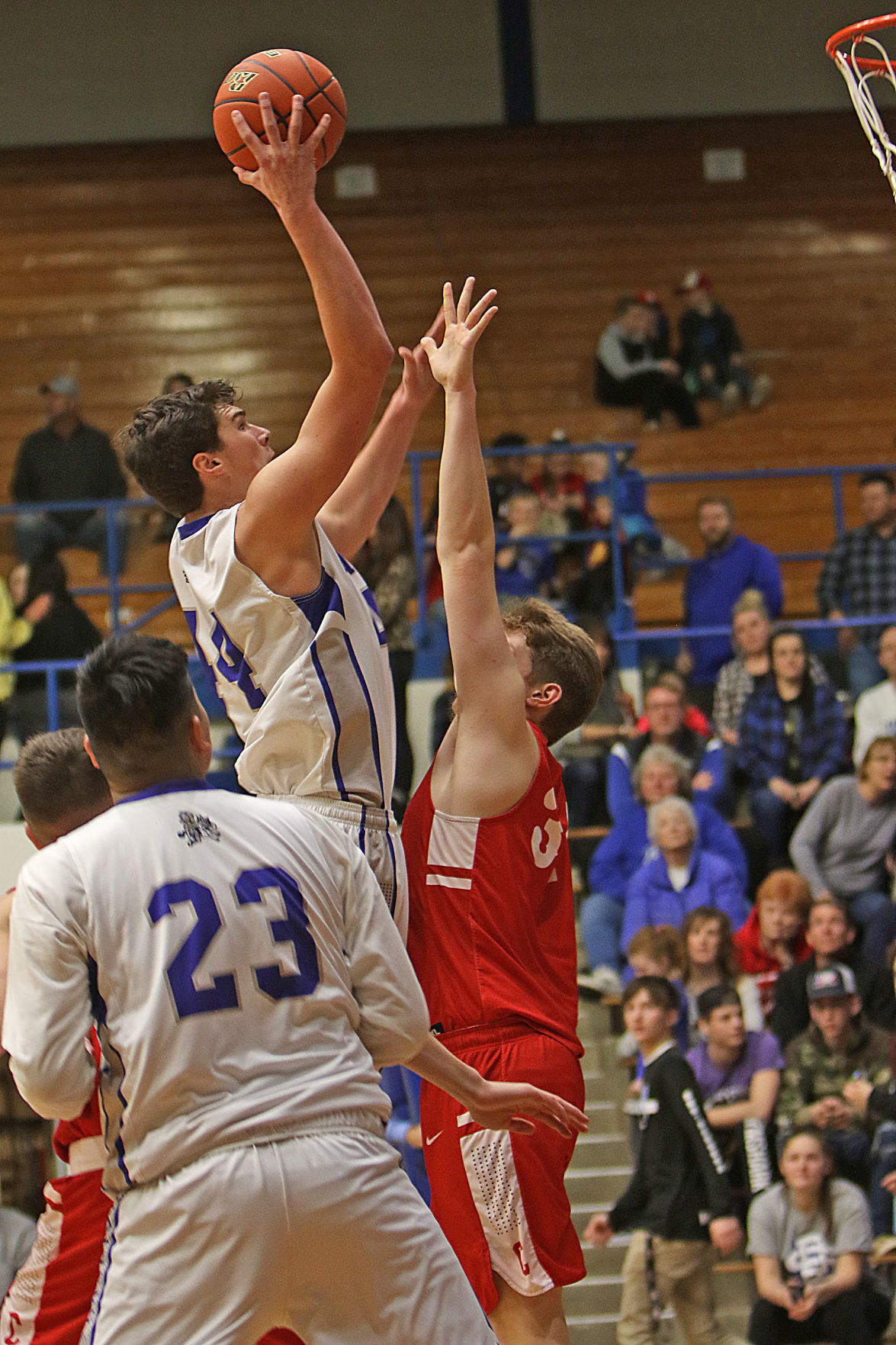 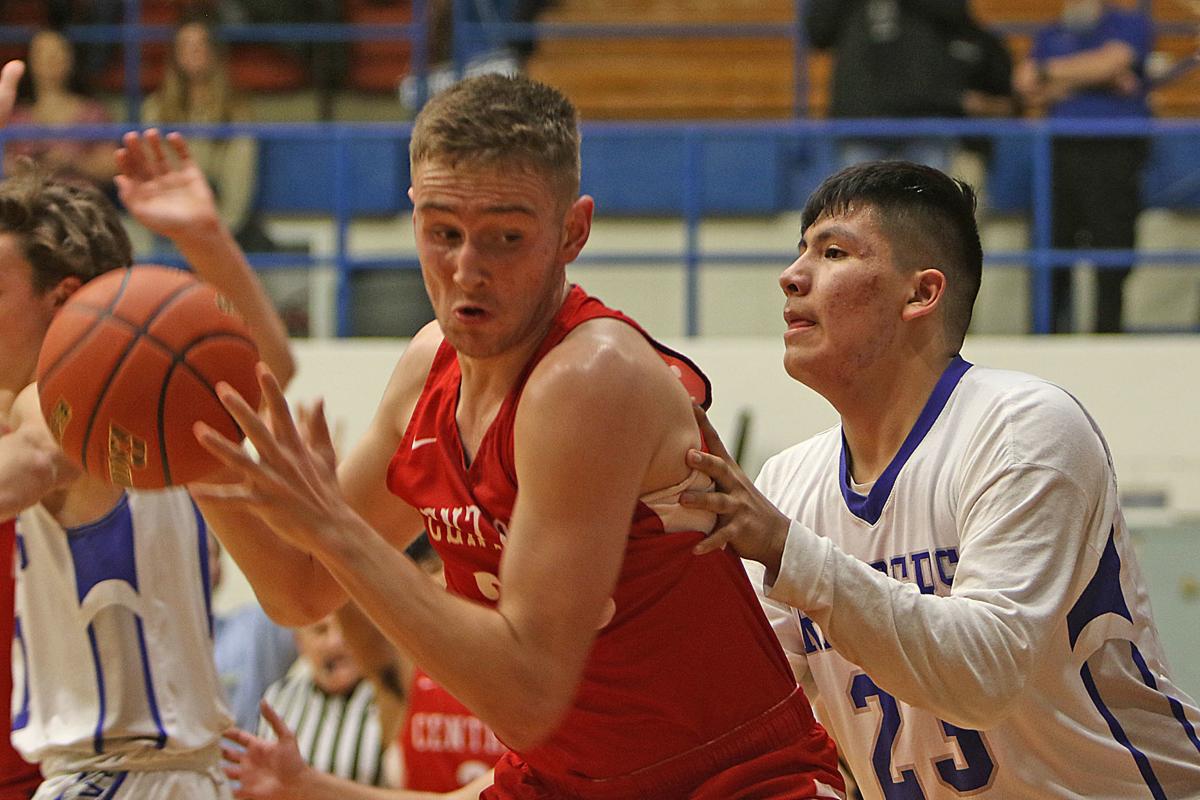 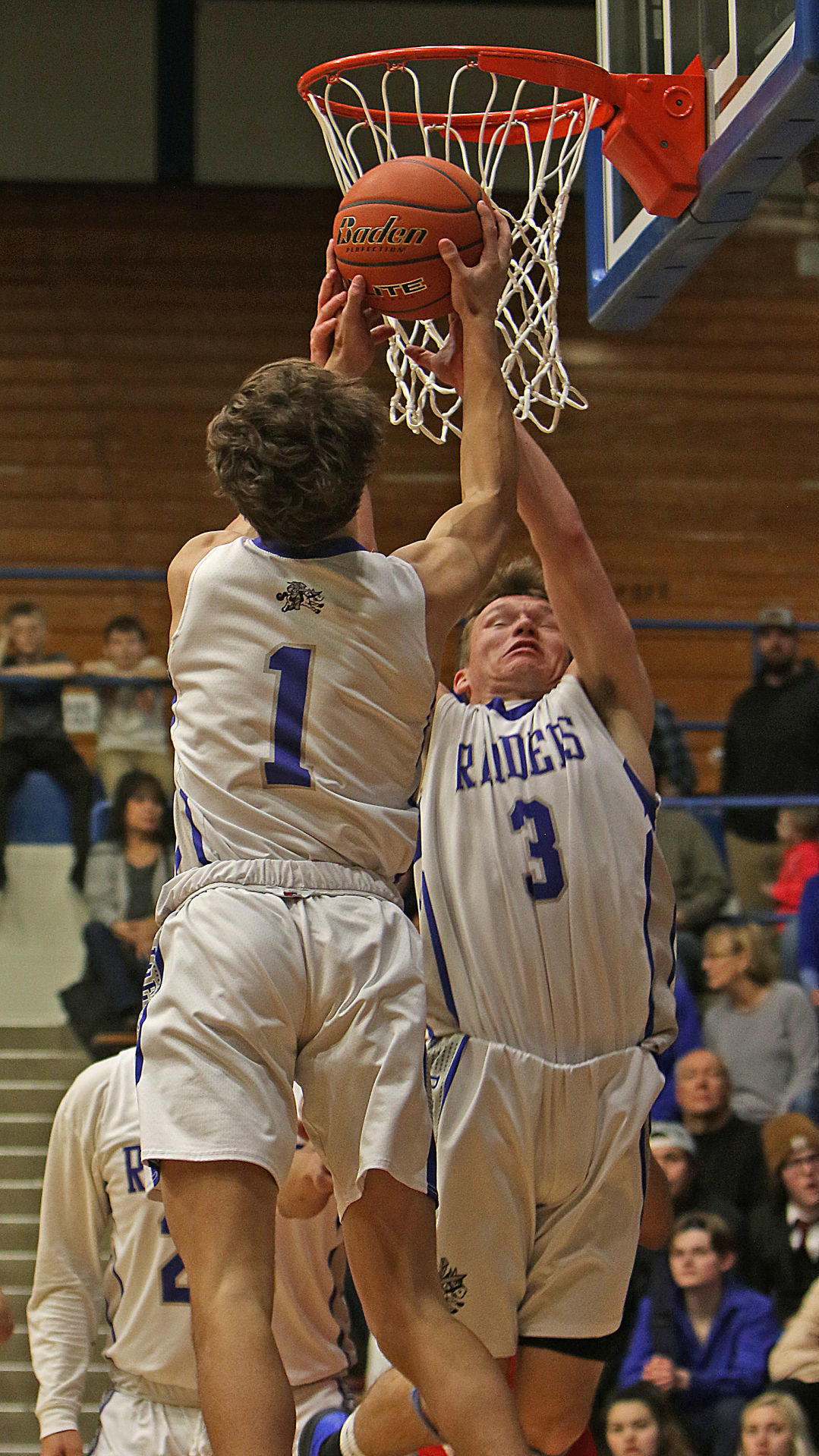 Two key players in the cross-town football rivalry between Rapid City Stevens and Rapid City Central found themselves in a key matchup Friday when the two schools met on the basketball court.

Raider senior Colton Hartford and Central junior Kohl Meisman, who are both quarterbacks on the football field, spent much of Friday’s game going head-to-head on the hardwood at Carold Heier Gymnasium. Hartford got the better of the boys basketball matchup, scoring 18 points and holding Meisman to nine as Stevens came away with a 69-51 win.

Meisman, a lanky 6-foot-6 guard/forward, has been Central’s go-to guy on the offensive end for much of the year. Stevens coach Chris Stoebner handed Hartford, who gave up six inches to the Cobbler, the duty to guard Meisman.

“He was my assignment,” Hartford said after holding the Cobbler junior to 3 of 12 shooting. “Coach wanted me to take him out of the game and force their other guys to score. I took away baseline and just got up in his grill.”

The Raiders all-court game was just too much for the Cobblers.

Stevens shot 52.0% from the field on 26 of 52 shooting. That included hitting 11 of 20 3-point attempts, several at big moments of the game when Central charged back from a double-digit deficit. At the defensive end, the Raiders limited Central to 38.8% shooting and held a narrow 31-30 rebounding advantage.

“That was one of our most complete games of the year,” said Stoebner. “We had a lot of guys play really well, and we’re a pretty good team when we just consistently keep going.

“Central made runs at us a couple times, but we fought through those, stayed even keel and were able to extend that lead again.”

Stevens needed less than six minutes to get out to a 10-point lead.

Hartford, Blake Weaver and Terrance Eastman, who has played a big role in recent weeks coming off the bench, all hit 3-pointers and center Mason Steele converted a traditional 3-point play as the Raiders jumped out to an 18-8 lead with 2:07 left in the opening quarter.

Down 25-13 after the opening eight minutes of play, Central climbed back into the game on the hot shooting of guard Micah Swallow, who scored all 15 of his points in the first half.

Swallow, a 6-2 junior guard, found his range late in the first quarter and carried that momentum into the second frame. His steal-and-layup and back-to-back 3-pointers pulled the Cobblers within 25-23 with five minutes to play in the half.

Central could’ve tied the game or even taken the lead, but the Cobblers’ shooting struggles at the free throw line hurt. They went 2 for 7 from the charity strip in the second quarter, including a miss on the front end of one bonus trip to the line.

Couple that with a couple timely 3-pointers from Stevens — one by Hartford and another from Weaver — and Central went to the half down 36-26 instead of half that.

“We’re not making free throws — you’re down six and miss two — and then they come down and hit a 3 and make their free throws,” Cobbler coach T.J. Hay explained. “It goes from a six-point game to 11 in a hurry.”

Central’s Robbie Weber and Trent Foli began to get points in the paint in the second half. When Meisman got a little room, he hit a jumper and followed with a 3-pointer and suddenly the Cobblers were within two points again, this time trailing 40-38 with 3:40 left in the third quarter.

But much like the second, Stevens bounced back with a couple big plays, this time a 3-pointer from Daniel Vigoren, a transition back from Bridger Nesbit and a buzzer-beating 3 from Hartford to push the Raiders ahead 50-42 after three.

After another bucket from Weber, who finished with 12 points, drew Central within 50-44, Stevens rattled off 17 unanswered points to put the game away.

“It’s huge. They’re a really good team,” Hartford said of Central. “But more importantly, it gets us on the right track. We have two big games coming up and this gives us some momentum after a three-game losing streak.”

The win slammed the door shut on the Raiders’ three-game losing streak after falling to No. 2 Sioux Falls O’Gorman, No. 4 Sioux Falls Roosevelt and Scottsbluff, Neb., the third-ranked team in Class B in Nebraska.

“We didn’t play our best, but we played really good teams,” Stoebner said of the win. “To beat a quality team like Central tonight, there’s no doubt it’s a confidence builder.”

Central (8-7) has now dropped four straight games after getting out to an 8-3 start to the season.

“We’ll bounce back,” Hay said. “This didn’t end our season. We’ve got five more games, and we have to be playing better basketball in six more games when it counts in the playoffs.”

Stevens and Central are home for games against Sioux Falls Lincoln and Sioux Falls Washington next weekend before the Raiders and Cobblers play again on Feb. 20 at Central’s Naasz Gymnasium.

Rapid City Central guard Taegen Wells (23) looks to pass the ball into the lane to a teammate while Blake Weaver (10) of Rapid City Stevens defends during their high school boys basketball game Friday at Heier Gymnasium.