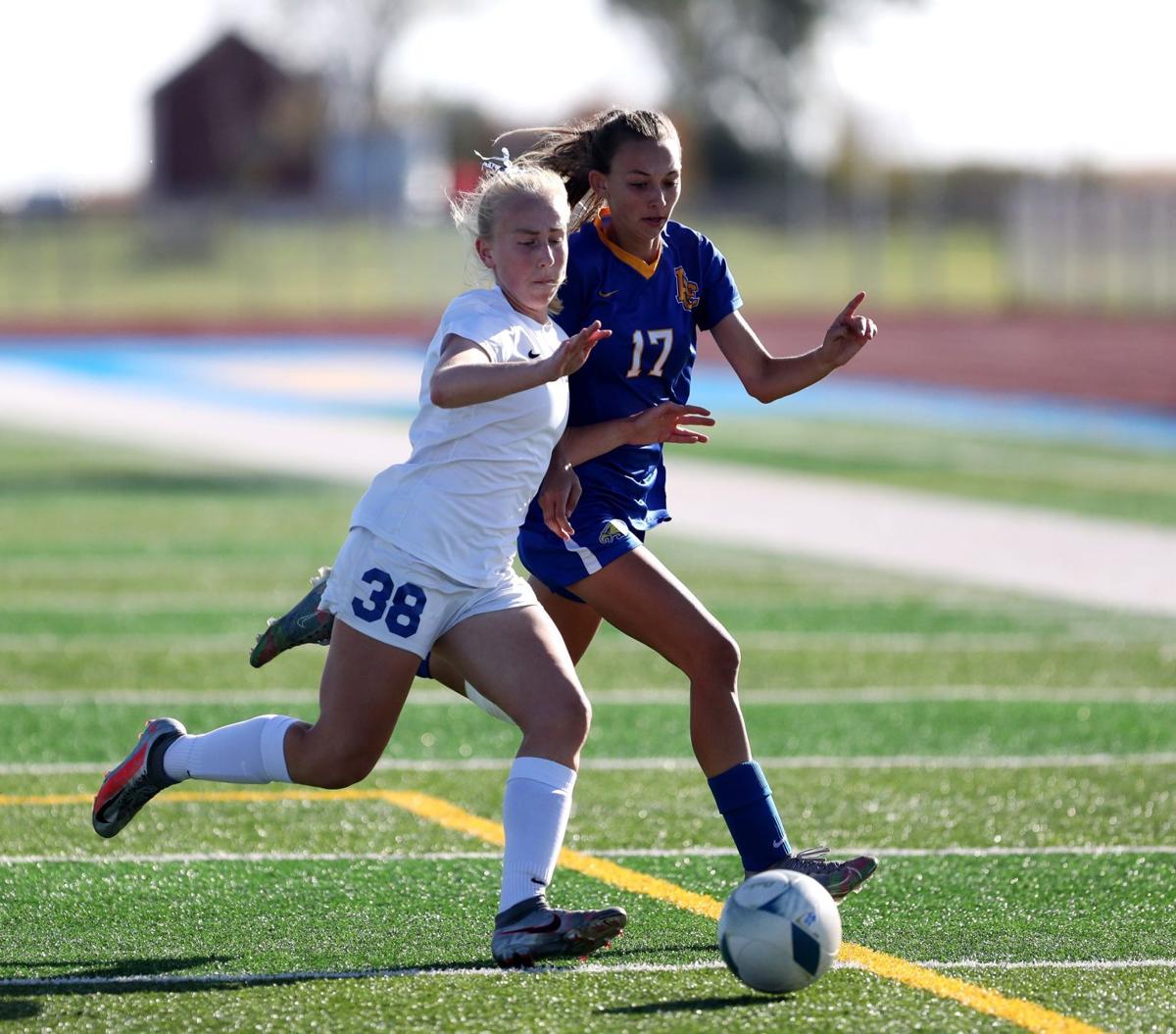 Aberdeen Central forward Jayda Hammer battles for the ball against Rapid City Stevens defender AJ Carr during the first half in the semifinals of the 2021 playoffs. 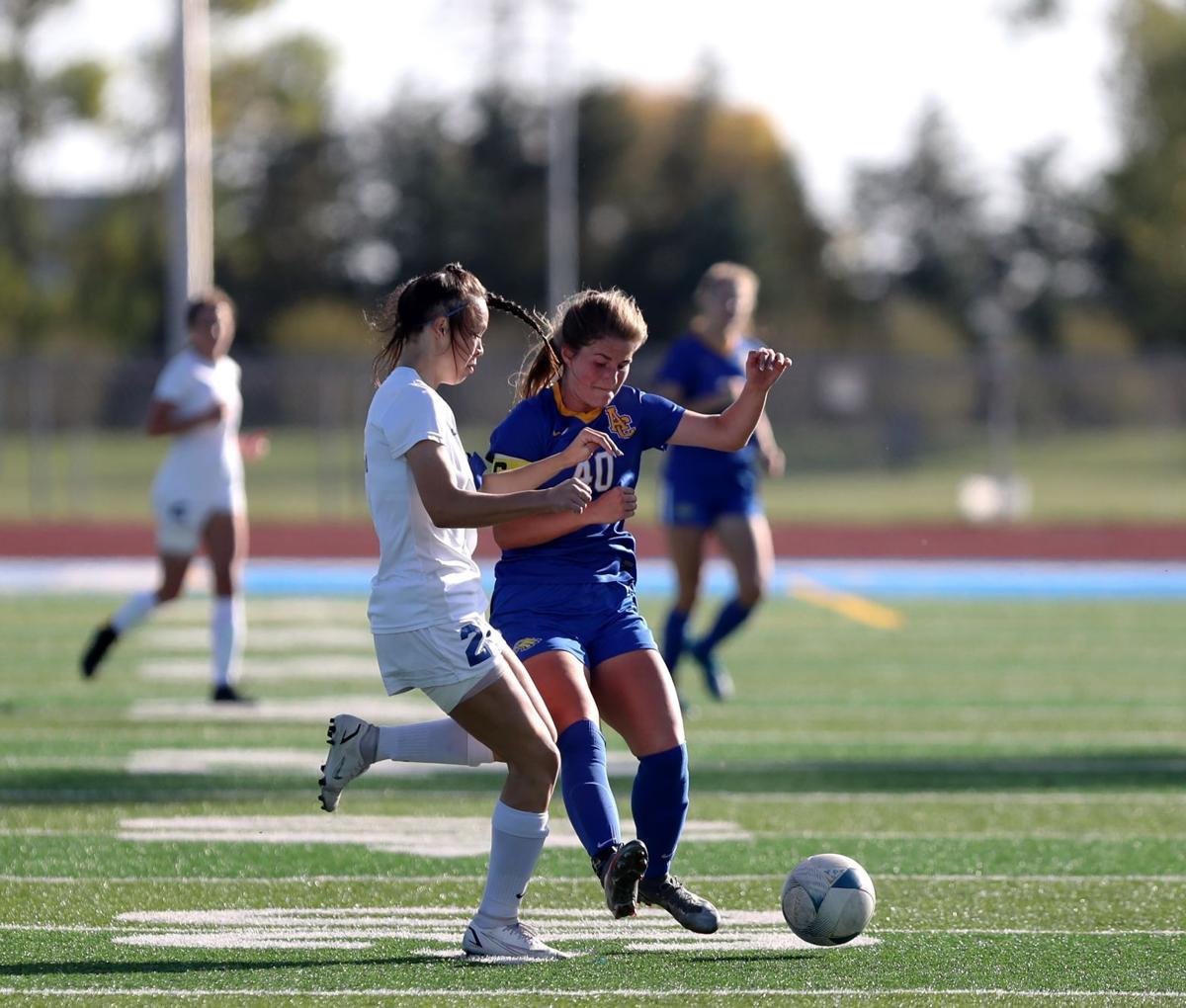 Aberdeen Central midfielder Taryn Hettich tries to gain possession of the ball against Rapid City Stevens defender Bresha Keegan during the first half in the semifinals of the 2021 playoffs. 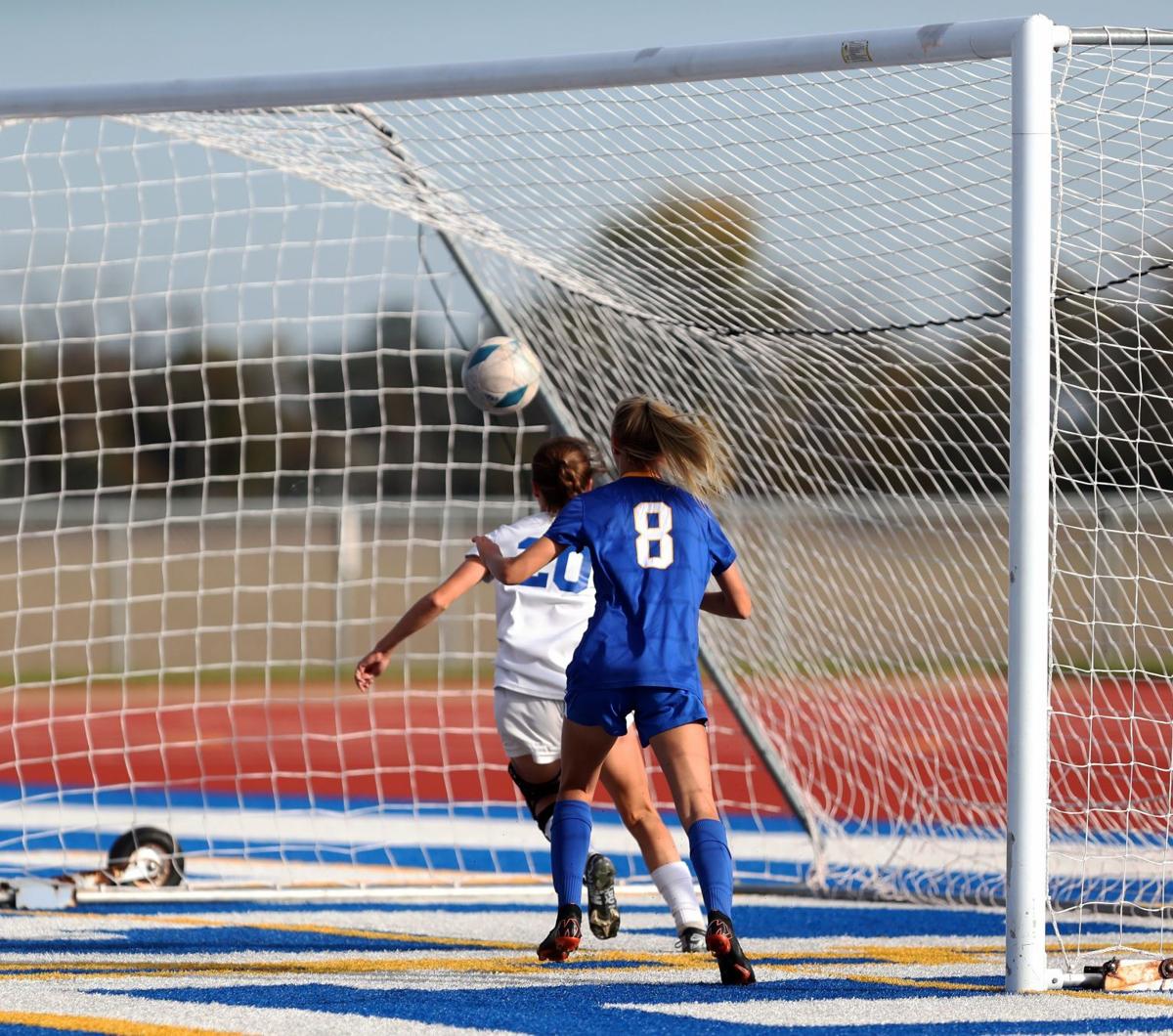 Aberdeen Central defender Claire Schaunaman watches as the ball deflects off Rapid City Stevens forward Emma Comes into the net for the third goal for Stevens during the first half in the semifinals of the 2021 playoffs.

The Rapid City Stevens girls’ soccer team fought back from an early deficit and played a solid defensive second half as it cruised to a 3-1 victory Tuesday over Aberdeen Central and earned its way into the state title game of the Class AA tournament.

"I am super proud of these girls," Stevens head coach Luis Usera said. "Every player that came on played hard and played a fast game. Aberdeen was the best team we played so far and we played really well.”

The top-seeded Golden Eagles showed why they were the head of the class early when Morgan Fielder scored in the fourth minute.

The Raiders, seeded fourth, wouldn’t let the early score affect them, though, as they tied the match in the 17th minute when Breanna Reagan scored an unassisted goal after cutting past the first defender and beating the second on a hesitation dribble before shooting the ball over the goaltenders hands in the corner of the net.

“That first goal from Reagan was a big one,” Usera said. “As soon as she scored that goal, we knew we were the better team and that we would win that game in the end. Her shot really started it for us. It changed the dynamic of the game.”

Stevens gained its first lead of the game less than five minutes later when Riley Schad had her shot blocked, before Emma Comes recovered the rebound and found the back of the net for a 2-1 advantage.

Stevens extended its lead in the 31st minute when Comes scored her second goal of the match after Tenly Synhorst hit a high cross into the wind and it carried the ball past the goaltender and Comes moved the ball into the net.

After carrying a 3-1 advantage into the second half, Usera shifted the focus to the defensive end of the field.

“We decided to make sure we didn’t open up the field for them,” he said. “We rotated players to make sure Taryn Hettich didn’t give us fits. She is a fantastic player. We just kept sending players at her, and as the half went on, they began to get rattled."

The defense held strong and kept Aberdeen Central’s high powered offense from scoring as the Raiders put the match away.

It was a tough loss for Central, which saw its season end at 11-1.

“I thought we could relax and play, but we were going against the wind,” Central head coach Merle Aske said of the first half. “And then they had the momentum and we started chasing the ball a little bit and lost our possession and lost our rhythm a little bit. We did a good job of fighting back and trying to get in there, but that’s the way it goes sometimes.

“We started in the first Monday in August and they have been working their tails off ever since," Aske added. "We got all the way right where we wanted to be, and then things just don’t go your way sometimes in athletics. We had a couple of bad breaks and bad bounces."

Stevens suffered two losses during the season (9-2-1), one of which came in the regular season finale in Spearfish.

It was a loss Usera felt might have given his team a little motivation heading into the postseason.

“Losing to Spearfish probably woke us up,” he said. “We didn’t expect to lose to them, and we came in confident, but losing to them woke us up. Now the girls are firing together and no one here is playing for themselves. It is amazing to be around them right now. They are ready for this and they have been since January. I am really excited that they get this opportunity.”

They will also have an opportunity to knock off the defending champions in Sioux Falls Roosevelt after it defeated Sioux Falls Lincoln 1-0 in the other semifinal game on Tuesday.

The Rough Riders, 4-5-2, are a familiar foe for Stevens as the Raiders picked up a 3-0 victory over Roosevelt in August.

“I told them not to celebrate too much at the end of the game,” Usera said. "This was a great win, but not where we want to be. We need to be humble and stay focused. If we do that and do what we have done all season, we will be exactly where we want to be.

Usera hopes this title game appearance is better than the last (2-0 loss to Pierre in a snowstorm in Rapid City) and feels his team is ready for the challenge.

“This group of seniors was in the last title game in 2018 and now they have another opportunity this season," he said. "These girls have worked hard, and I believe they are ready.”

Aberdeen Central forward Jayda Hammer battles for the ball against Rapid City Stevens defender AJ Carr during the first half in the semifinals of the 2021 playoffs.

Aberdeen Central midfielder Taryn Hettich tries to gain possession of the ball against Rapid City Stevens defender Bresha Keegan during the first half in the semifinals of the 2021 playoffs.

Aberdeen Central defender Claire Schaunaman watches as the ball deflects off Rapid City Stevens forward Emma Comes into the net for the third goal for Stevens during the first half in the semifinals of the 2021 playoffs.