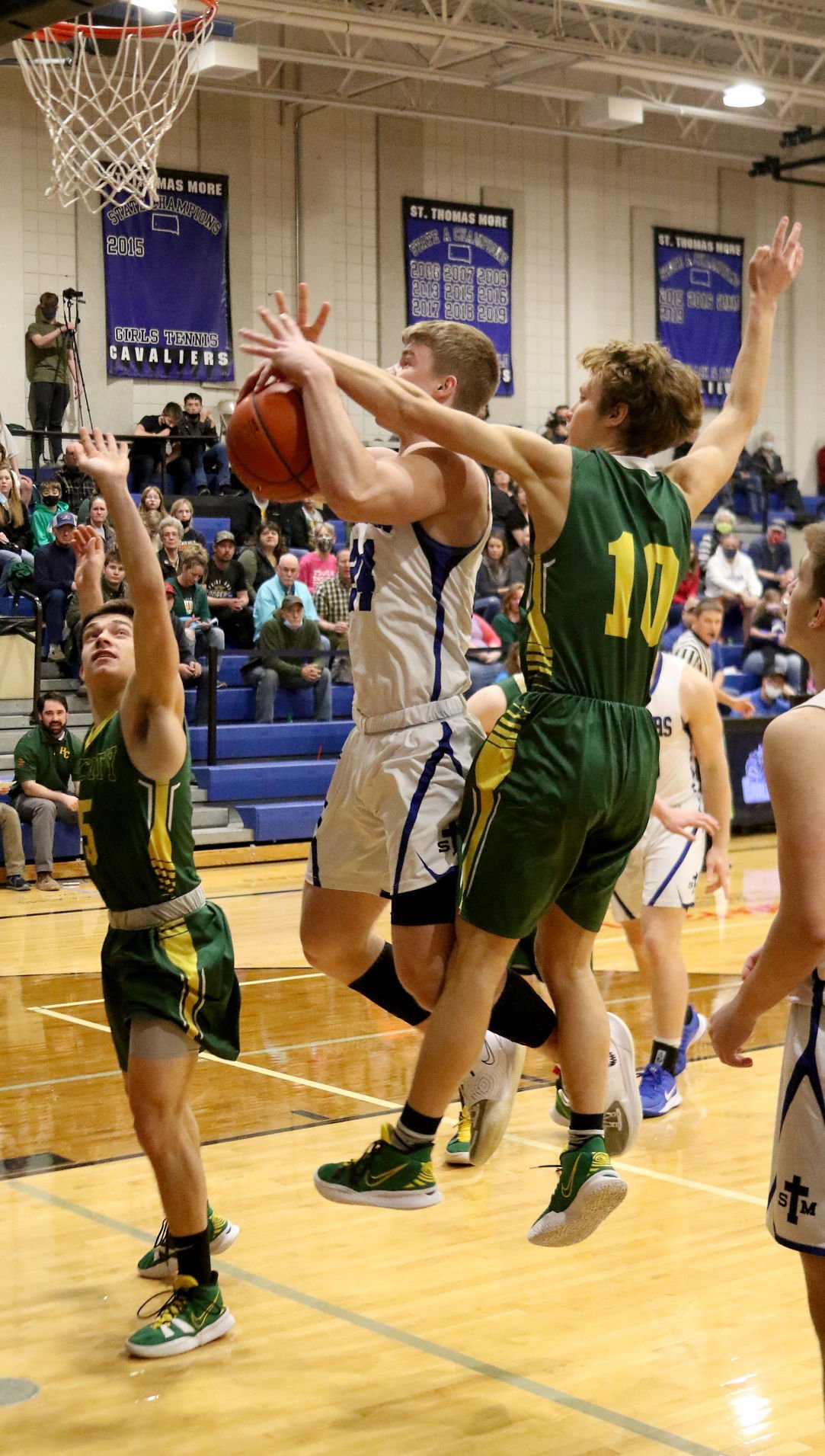 Cavalier senior Charlie Larson is fouled by Hill City's Will Walther during the first half of St. Thomas More's win Friday night. 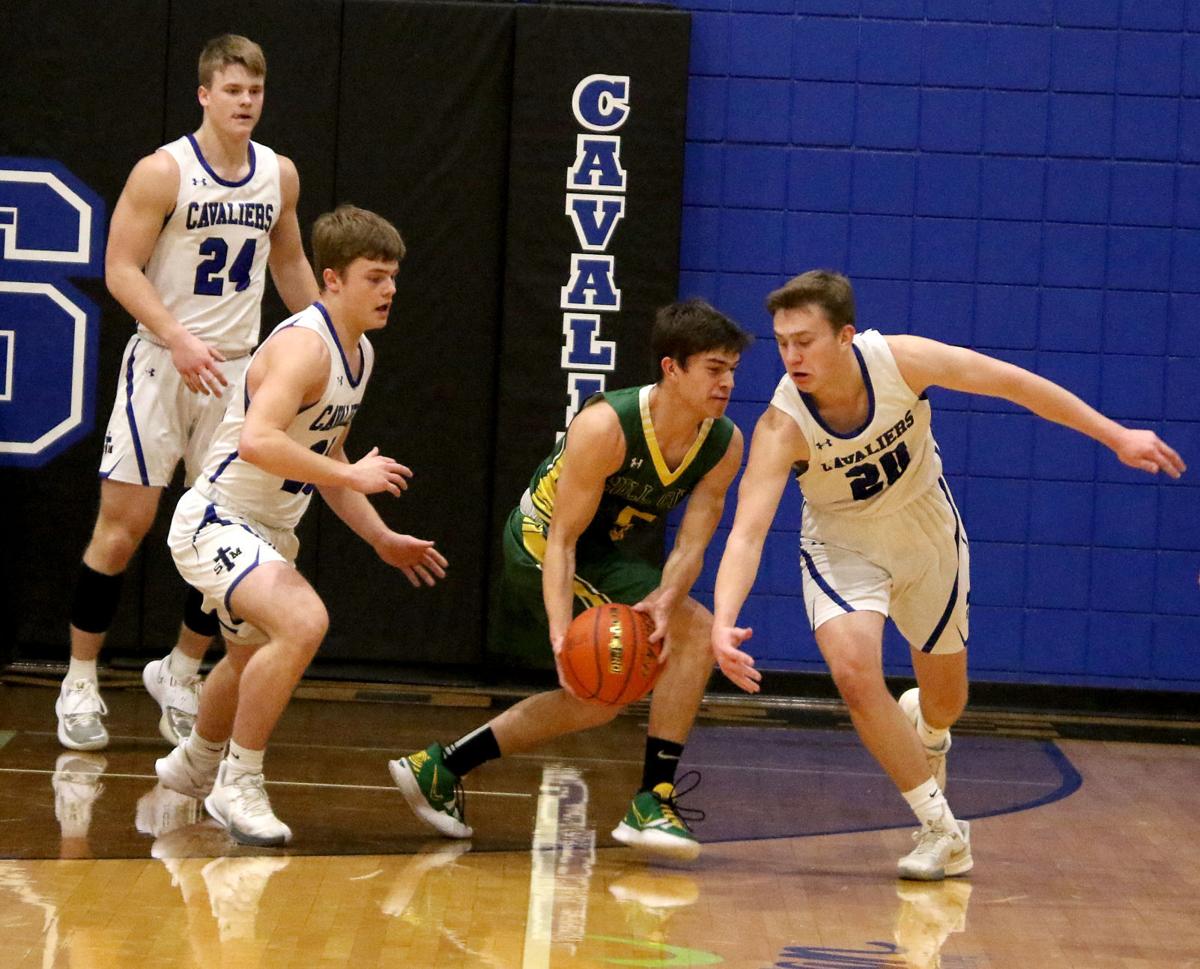 When it comes to postseason play, it's win and you're still in. For the St. Thomas More boys' basketball team, that certainly is the case despite a rough second quarter.

Now 18-3 and one game away from qualifying for another state tournament, the Cavaliers had a fight on their hands as it was the Hill City Rangers who turned some heads before the Cavs broke away from a halftime tie for the 70-48 victory Friday night at the STM gymnasium.

St. Thomas More led by 11 at the end of the first quarter, but was outscored by 11 in the second as the Rangers enthusiastically went into the locker room feeling good.

Although veteran STM head coach Dave Hollenbeck was less than pleased with his team — to say the least — he said that Hill City was exciting to watch as hard as the Rangers played.

"They were enthused and they had 100 percent respect for the game of basketball, they played it the right way," Hollenbeck said. "I thought we had some guys who didn't come to play, and maybe didn't respect the game tonight. That was disappointing, but that is also a credit to Hill City. They shot well and hit a lot of outside shots. I think Hill city has a lot to be proud of the way they came to play. It's a credit to them and a credit to their coaching staff."

STM senior Charlie Larson said they had to clamp down on defense and do the  little things right they didn't do in the first half.

"We didn't come ready to play obviously, and it showed on the scoreboard," Larson said. "We had to work as a team and come back and chill out."

"The first few minutes were kind of rough, but once we started rotating, we were able to make things tough, their big guys are really good, and that kind of turned it around," he said.

Early on, things looked as if they would be a breeze for the Cavaliers, as Larson scored 10 points in the first quarter and senior Ben Feist added six for a 22-11 lead.

It was still an 11-point game before the Rangers came roaring back. A 3-pointer by junior Kobe Main, followed by a basket by senior Grant Sullivan cut the lead to two, and Sullivan hit a buzzer-beating 3-pointer to tie the game at 32-all at halftime.

"That was huge," Bayne said of his team's 3-point shooting in the first half. "It's all about the guys practicing (3-pointers), but also taking the right ones. I was proud of the effort and the execution was really good."

The Cavaliers got the message and came out and controlled the second half and got back up by double digits on a lay-in by sophomore Caleb Hollenbeck, who didn't play in the first half because of a back injury.

Five more points by Hollenbeck, including a 3-pointer at the buzzer, put the Cavs up 50-38 going into the fourth,

STM went back to its bread and butter and got the ball inside to Larson, Feist and Ryan Wojcik and outscored the Rangers 20-10 in the fourth quarter.

The STM defense, meanwhile, gave up just one 3-pointer in the second half and held the Rangers to just 16 points.

"We defended better in the second half, and what is disappointing is we talked about the same exact thing before the tip-off," Dave Hollenbeck said. "For whatever reason, we didn't listen and get the message. Fortunately we did at halftime and turned some things around. We got the ball inside nicely for a stretch and had an advantage on them."

Larson led all scorers with 20 points, while Wojcik finished with 16 and Feist added 12 points.

"We worked it in the post more, worked it as a team, passed to each other and just worked together more offensively and defensively, just talking," Larson said. "My teammates were getting great passes inside, and it just helped finishing around the rim. I couldn't have done it without them."

Main and Sullivan both scored 18 points for the Rangers, who finished the season on a much better note despite the loss.

"It was huge for our guys to come back. We just played them two weeks ago and it was not that close," Bayne said. "But for them to prove to themselves that, 'This is what we are capable of,' and for a group that is mostly coming back next year, hopefully it is something we can build on and keep going."

STM, meanwhile, will now prepare for Madison in the SoDak16 Tuesday night in Kadoka.

"We've seen some film on them. They are very athletic and they play fast," Dave Hollenbeck said. "We struggled with that speed tonight. We're going to have our hands full. We have to play a lot smarter and have a better effort, especially on the boards."

"It showed us tonight that any given night, you can go home," he said.

Cavalier senior Charlie Larson is fouled by Hill City's Will Walther during the first half of St. Thomas More's win Friday night.