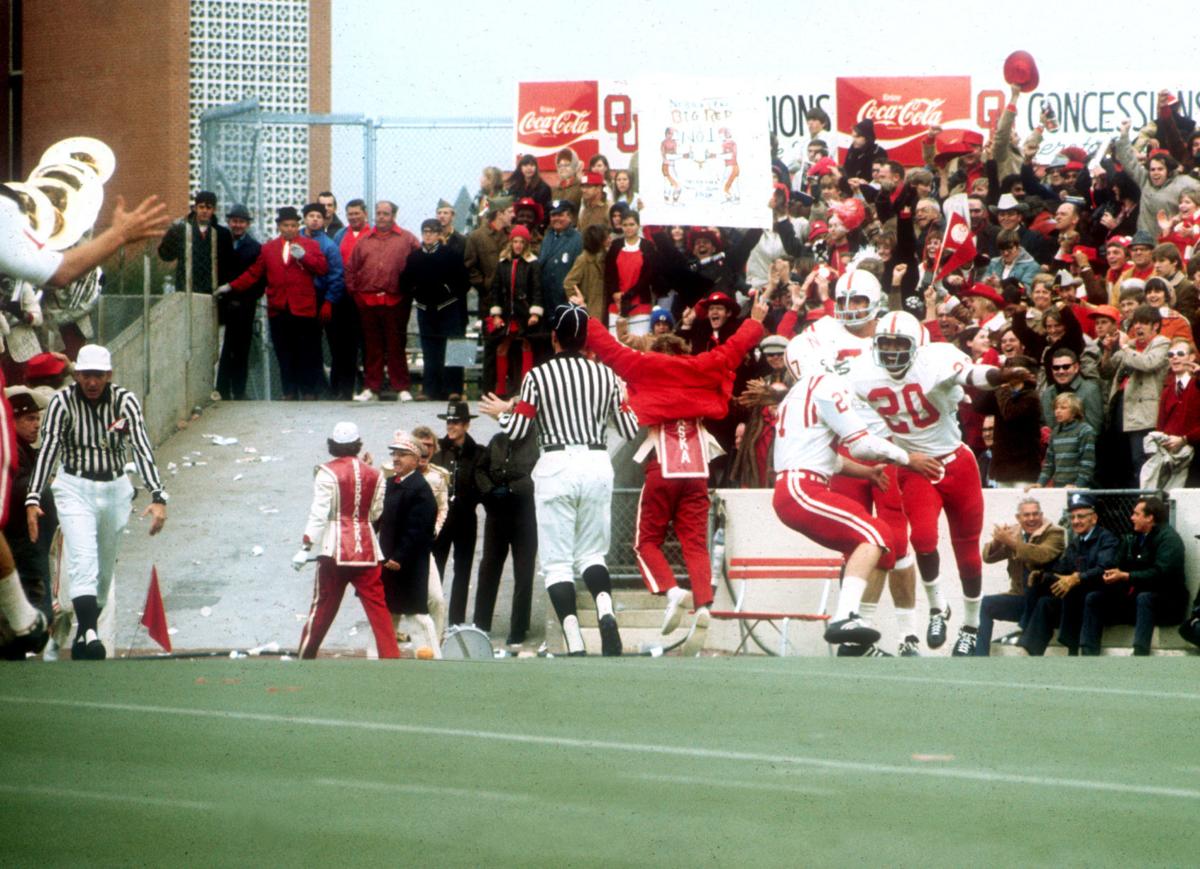 In this Nov. 25, 1971, file photo, Nebraska's Johnny Rodgers (20) celebrates in the end zone after his long punt return against Oklahoma in Norman, Okla., on Thanksgiving Day. The game on Thanksgiving 50 years ago is back in the spotlight as Nebraska and Oklahoma renew their rivalry on Saturday. 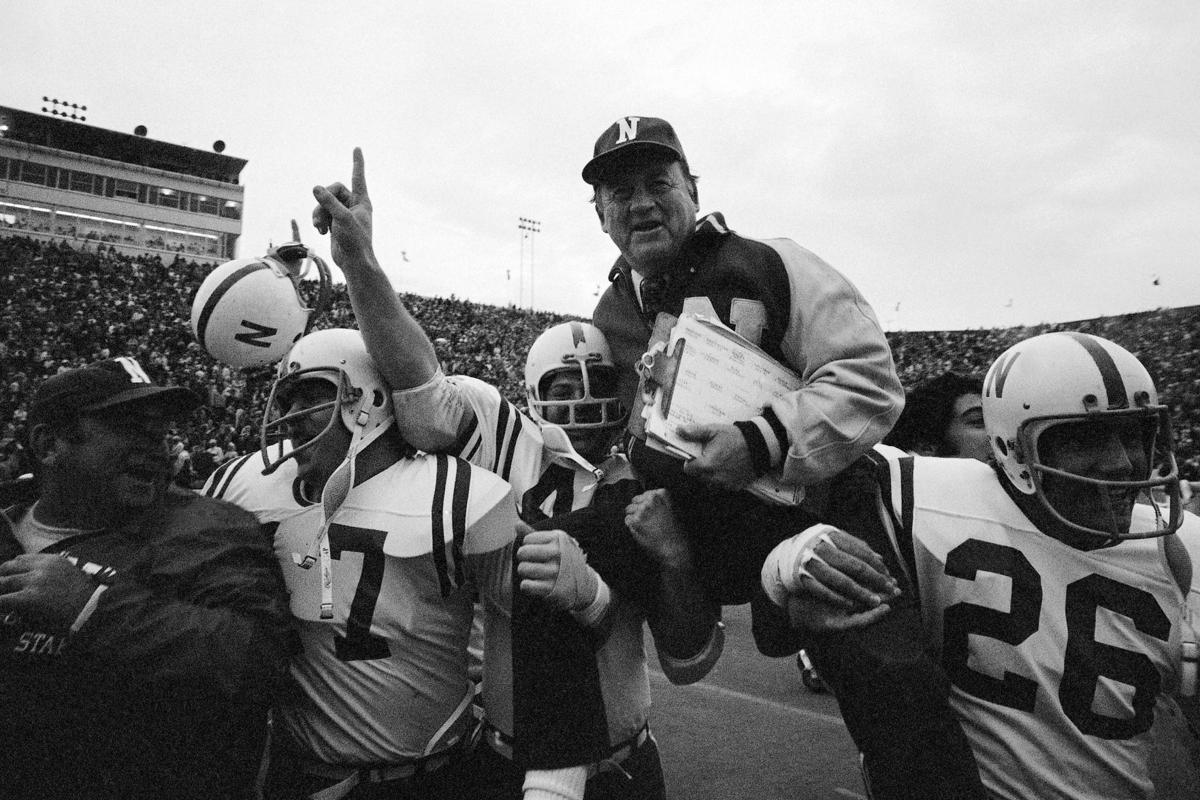 In this Nov. 25, 1971, file photo, Nebraska head coach Bob Devaney is carried off the field by his victorious players after they defeated Oklahoma 35-31 in an NCAA college football game in Norman, Okla., on Thanksgiving Day. The game on Thanksgiving 50 years ago is back in the spotlight as Nebraska and Oklahoma renew their rivalry on Saturday.

LINCOLN, Neb. — Nebraska's visit to third-ranked Oklahoma on Saturday is a trip down memory lane for the over-40 set of college football fans.

It's the 50th anniversary of the "Game of the Century," the showdown between the nation's Nos. 1 and 2 teams in Norman that set the stage for classic 1970s and '80s battles between Nebraska's straight-laced Tom Osborne and Oklahoma's swashbuckling Barry Switzer.

"I think the thing that's distinctive about the so-called rivalry was that it was never a nasty rivalry," Osborne, now 84, told The Associated Press. "It was always fairly respectful, always very hard fought, but never ugly.

"Part of that was Switzer's personality. He kind of would rub your nose in it a little but he always did it in a good-humor way. I don't think I ever tried to belittle Oklahoma or trash talk or anything, and I think to some degree that rubbed off on the fans."

The rivalry is no longer a rivalry. Conference realignment took care of that. The first meeting in 11 years really has no stakes, unless the Huskers (2-1) upset the Sooners (2-0). Nebraska has had four straight losing seasons and are 22.5-point underdogs, according to FanDuel Sportsbook.

While Nebraska's 35-31 win in 1971 and the games that followed the next two decades represented the heyday of the series, the rivalry began in earnest all the way back in 1919.

That's when Oklahoma replaced Nebraska in the Missouri Valley Conference after the Huskers got kicked out for two years for violating a league scheduling policy, Nebraska football historian Mike Babcock said.

The MVC required its teams to play home games on their campuses. Nebraska met Oklahoma in Omaha instead of Lincoln in 1919. The game was a 7-7 tie, Nebraska got the boot from the Valley — and the Sooners were rewarded with an invitation to the league.

It was game on after that.

Nebraska broke through in '59 with one of its greatest wins. The Huskers' 25-21 victory ended the Sooners' 74-game conference unbeaten streak. It was particularly sweet for beleaguered Nebraska coach Bill Jennings, who had been an OU assistant from 1950-55 and was the fall guy for Bud Wilkinson's alleged slush fund used to pay players.

Wilkinson and Jennings accused the other of breaking a gentleman's agreement to not recruit players from each other's states, according to Babock, and Jennings helped put the Sooners on probation in 1960 by talking with the NCAA about Wilkinson.

Attention turned back to the field in the 1960s as Bob Devaney built Nebraska into a machine. Oklahoma was up and down in those years and was unranked when it snuffed Devaney's national championship hopes with upsets against unbeaten, top-five Huskers teams in 1964 and '66.

Then things really got good.

For Nebraska, Oklahoma was THE rival. For Oklahoma, Nebraska was A rival, and so was Texas, but for different reasons.

"The game of importance to the players and the coaches was always the Nebraska game because it determined the Big Eight Conference championship, who got to the Orange Bowl and who got to play the best team in the country," Switzer said, "because the Orange Bowl attracted the best (opponent). And that always helped determine more national championships in that period of time and era than any other game."

The Cornhuskers and Sooners met every year from 1928 to 1997, and starting in 1950 it usually was their last conference game. Over the final 36 years of the Big Eight, the game decided 31 championships.

Oklahoma was Osborne's foil from the time he became head coach in 1973 until he finally beat the Sooners in 1978. That '78 win was undercut when Nebraska lost to Missouri the next week and had to play a rematch against the Sooners in the Orange Bowl, which OU won.

By then, Osborne had seen enough of Thomas Lott, Elvis Peacock, Kenny King, Sims and all the others. With a can't-beat-'em-join-'em attitude, Osborne began transitioning to the triple-option in the late 1970s.

Osborne said he chose the option over the wishbone because the option run out of the I-formation allowed more flexibility for how the tailback is used, and the unique system with hulking linemen clearing the way was the signature of Nebraska's three national championship teams in the mid 1990s.

"Adversity is a great teacher," Osborne said. "You probably learned more from games that you lost than the games you win. When you win, why change? But if you lose, everything tends to be on the table."

Jeff Quinn was the first option quarterback recruited by Osborne. With Quinn as the starter in 1979, the change in the offense was obvious. Quinn never beat Oklahoma, but the Huskers ran off three straight wins in the series with Turner Gill at quarterback.

Oklahoma controlled the series in the mid-1980s with Jamelle Holieway at quarterback, and then it was Nebraska's turn in the '90s with Tommie Frazier and Scott Frost.

The allure of Nebraska-Oklahoma faded when the Big 12 came into existence and the teams stopped meeting every year. They did play conference championship games in 2006 and 2010, with the Sooners winning both. OU goes into Saturday's game leading the series 45-38-3.

"It brings back memories," said Greg Pruitt, OU's All-America running back of the early 1970s. "It brings back what excellence looks like. Just good for people to talk about the game, get the people to reminisce about the players who played and where those players are now.

"It gives us the stage again. It keeps our names in the minds and hearts of young people who were too young to see us play."

In this Nov. 25, 1971, file photo, Nebraska's Johnny Rodgers (20) celebrates in the end zone after his long punt return against Oklahoma in Norman, Okla., on Thanksgiving Day. The game on Thanksgiving 50 years ago is back in the spotlight as Nebraska and Oklahoma renew their rivalry on Saturday.

In this Nov. 25, 1971, file photo, Nebraska head coach Bob Devaney is carried off the field by his victorious players after they defeated Oklahoma 35-31 in an NCAA college football game in Norman, Okla., on Thanksgiving Day. The game on Thanksgiving 50 years ago is back in the spotlight as Nebraska and Oklahoma renew their rivalry on Saturday.