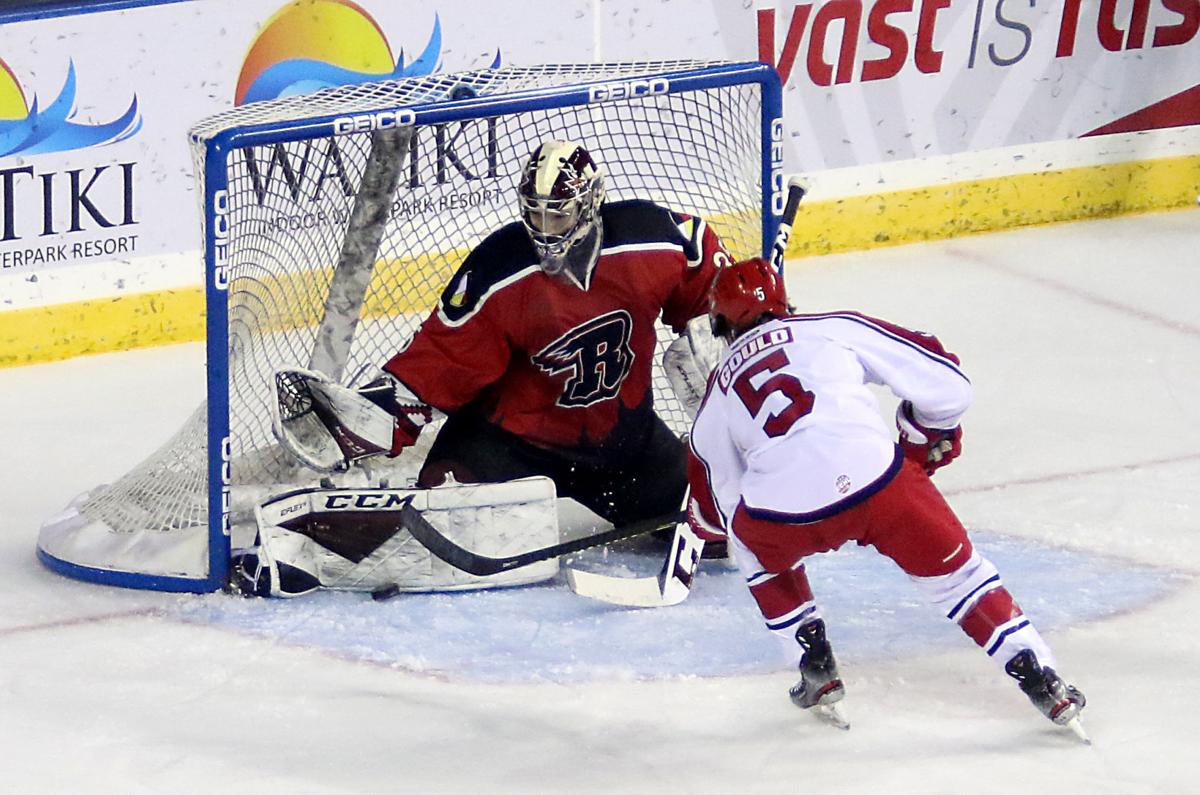 Rapid City goalie David Tendeck uses his pads to make a save in the first period against Allen Saturday. 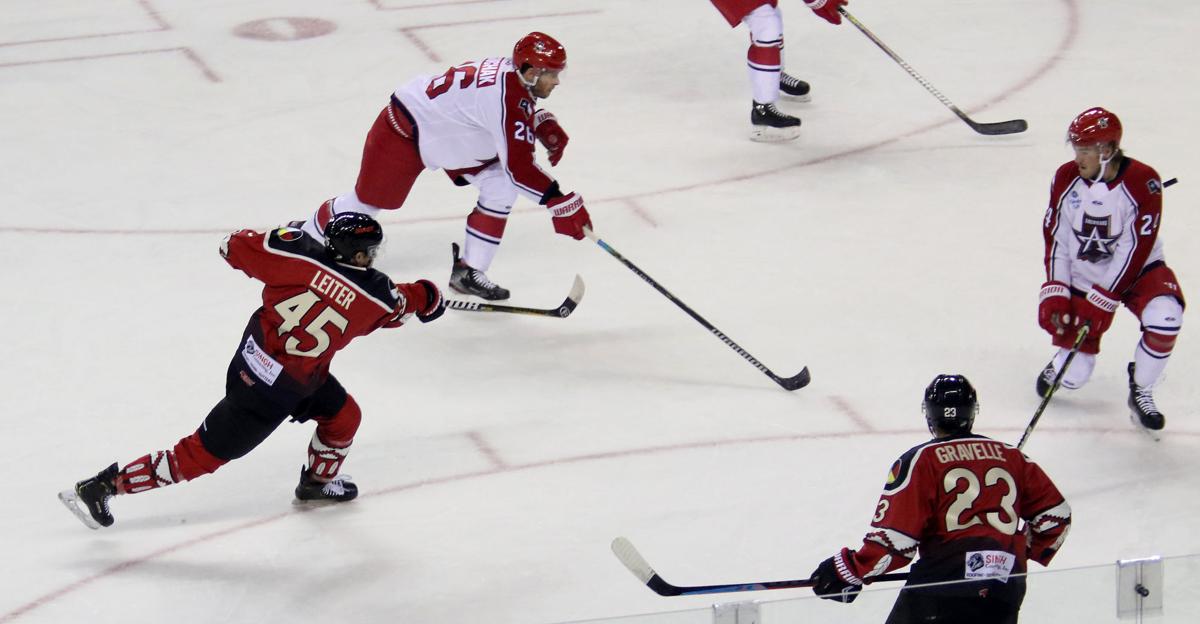 A go-ahead goal for the Rapid City Rush more than midway through the third period Saturday had that feeling that it would serve as the game-winner.

The Rush were outshooting a shorthanded Allen Americans squad, winning puck battles and were the superior squad in the energy department.

But a Monument Ice Arena crowd at 83% capacity was silenced when Gavin Gould potted a pair of goals in less than a minute and a half, finishing off a hat trick performance, to give the advantage back to the Americans, who held onto their third lead of the night for a 5-4 victory to claim the three-game series.

Third periods have not been friendly to Rapid City (4-6-2) this season, as 42% of its surrendered goals have come in the final 20 minutes. Head coach Scott Burt chalked it up to the youth of his group.

“Let’s be serious; we have a lot of first-year players,” he said. “You can only say so much about getting pucks in and keeping pucks out. Sometimes that’s where the maturity is. We’re not a mature group because we continue to kick ourselves and feed the fuel to the other team.”

Dave Tendeck, the third different goalie for the Rush in as many games, continued to struggle, seeing only 23 shots in the loss to move to 1-5-0 on the campaign.

On the offensive front, on a positive note, Quinn Wichers tallied his first ECHL goal, while Jake Wahlin and Gabe Chabot, who on Friday notched their maiden goals of the season, both scored again. Forward Garrett Klotz was out serving a one-game suspension, his second of the year, for his fight on Friday.

“I’ve always been a coach who’s played players. I don’t necessarily don’t play a player on the bench,” Burt said. “We need our guys to get hot, and they’re scoring goals.”

Rapid City did not allow a goal in the contest’s first five minutes, ending a streak of three straight games, and in fact took the lead in the opening frame for just the fourth time when Wichers unleashed a wrister from the far left side of the blue line that floated through traffic and found the net at 9:12.

The lead was short-lived, however, as Allen (4-6-2) responded with a goal at 15:25 from Jackson Leppard, who tucked a rebound around Tendeck in a right-place-at-the-right-time play to level the score before Gould followed 1:16 later with a top-shelf backhander over Tendeck’s shoulder to move the Americans in front.

Zach Court, one of six Rush skaters yet to pot a goal, fired a shot on net that was blockered away, but Wahlin grabbed the rebound and snuck the puck between the legs of goalie Hayden Lavigne to level the contest 2-2 at 12:32 of the second period.

Two nights in a row! pic.twitter.com/J4a59LgC0g

Allen was nicked with a cross-checking penalty later in the frame, but as a shorthanded unit, Spencer Asuchak found himself with the puck and point-blank look at Tendeck. The 6-foot-6, 230-pound center went top-shelf on Tendeck for the shorthanded goal at 13:34 to put the Americans ahead again, 3-2.

Before the second period concluded, Chabot was unsuccessful on a wrap-around attempt in the final minute, but only moments later the 5-foot-8 forward received a feed from Tristan Thompson from the point and buried a short-sided one-timer to level things at 3-3 with 55.4 seconds to play in the frame.

If at first you don’t succeed, try try again pic.twitter.com/IQSi3CFmkj

Schachle’s go-ahead score was potted at 11:11, lucky or not, when he blasted a one-timer from the high slot on a pass from Wahlin.

Right down the slot! pic.twitter.com/p7NhQ6eb23

Gould tied it up again following a costly hooking penalty on Butcher, poking in a short-sided goal at 17:06. He then ripped the eventual game-winner from the slot at 18:27.

“The fifth goal was a miss-coverage,” Burt said. “It was one in another game that we gave away. It’s tough, but this is about learning and our group needs to learn quickly because we’re giving games away.”

Rapid City concludes a six-game homestand and will now begin an eight-game stretch on the road that includes meetings with the Wichita Thunder, Kansas City Mavericks, the Tulsa Oilers and the Allen Americans. The Rush are slated to return to The Monument Ice Arena on Dec. 8.

Rapid City goalie David Tendeck uses his pads to make a save in the first period against Allen Saturday. 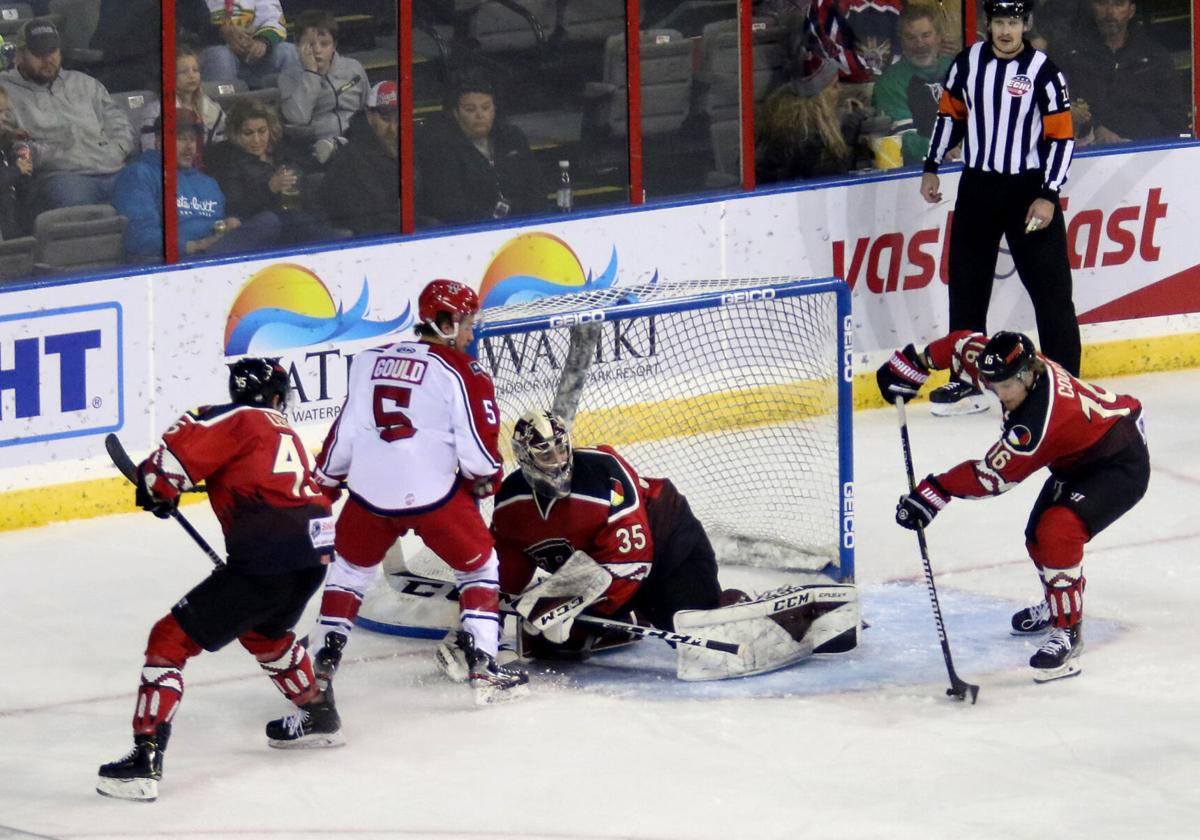 Rush forward Zach Court (16) clears the puck from the crease after goalie David Tendeck makes a save in the first period of Rapid City's 5-4 loss to Allen. 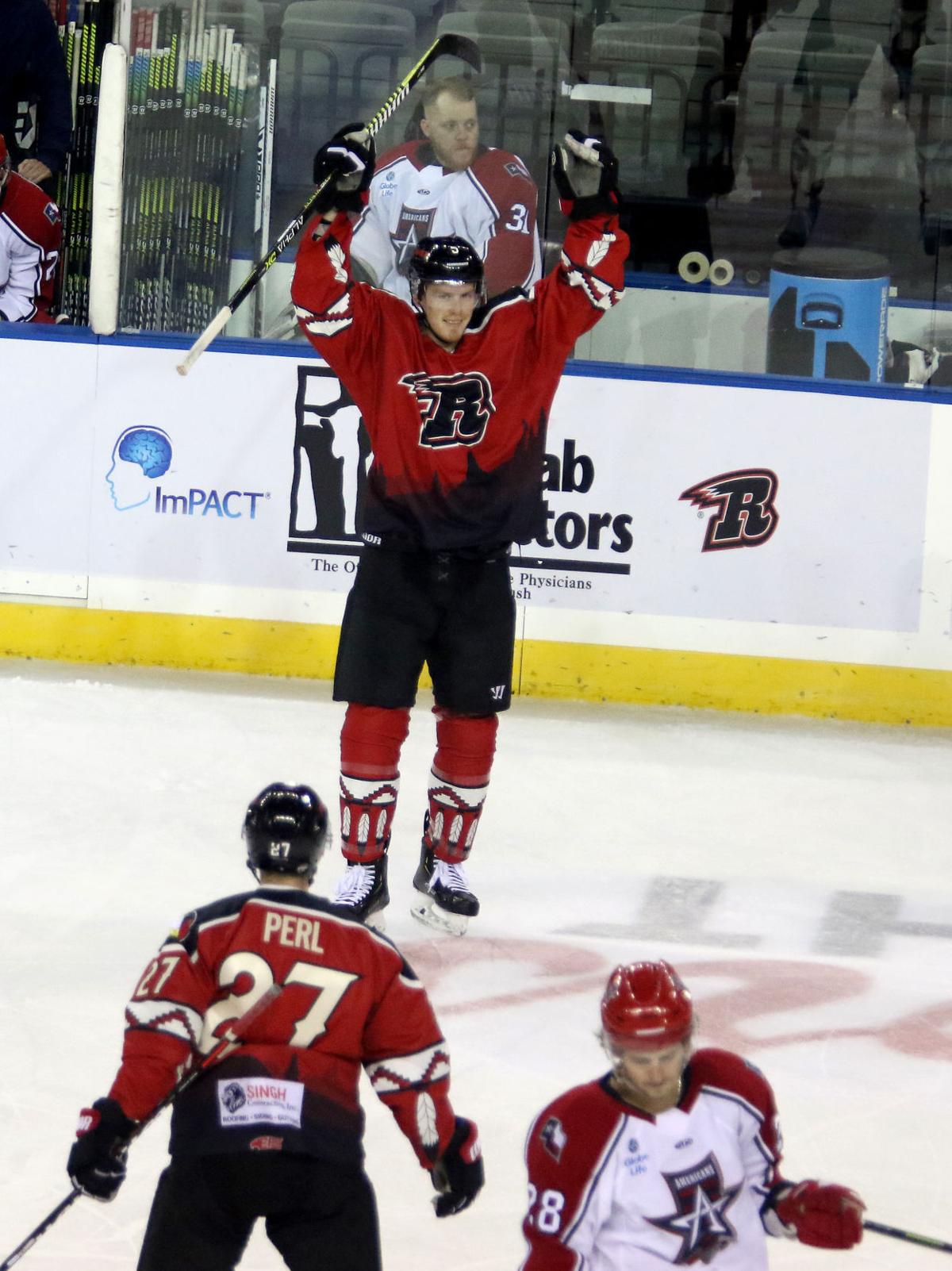 Rapid City defenseman Quinn Wichers (5) celebrates after scoring his first goal of the season during the Rush's 5-4 loss to Allen Saturday.