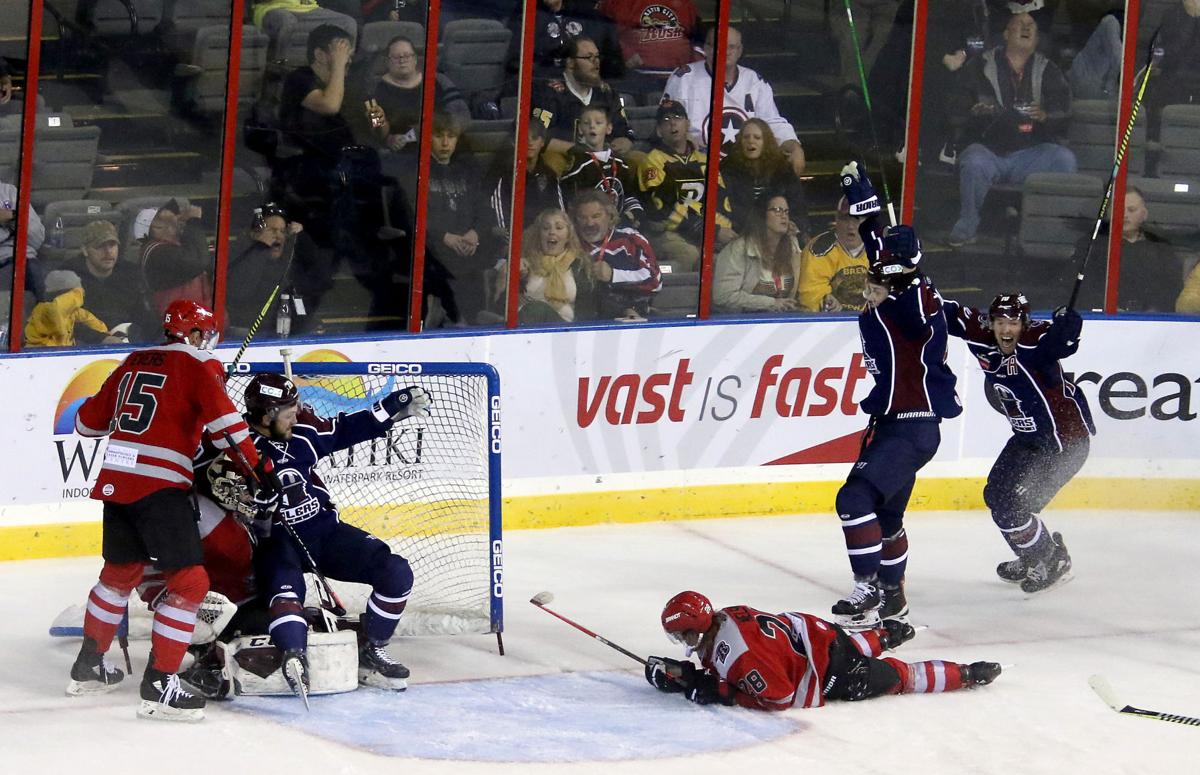 Rapid City Rush goalie Dave Tendeck is crashed into as the Tulsa Oilers score the go-ahead goal Saturday at The Monument. 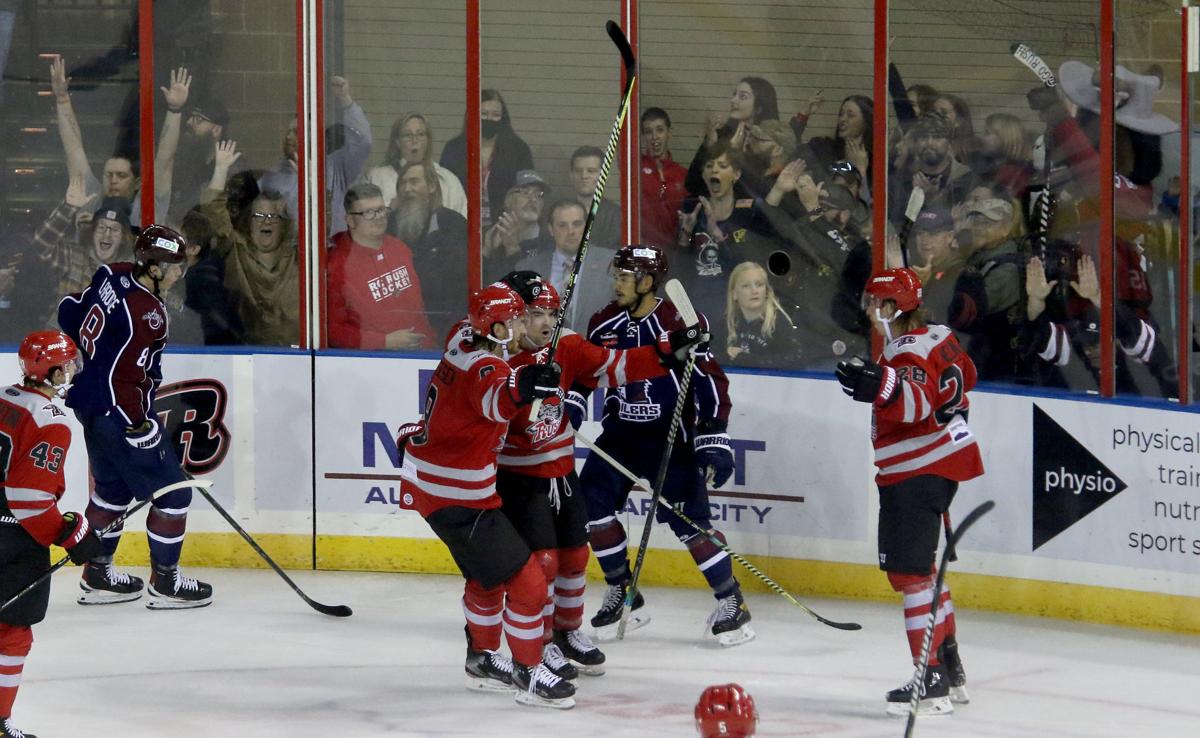 The new-look Rapid City Rush got their first taste of a late-game deficit Saturday night.

After the Tulsa Oilers potted a go-ahead score with just over a minute remaining, the Rush tried out their first 6-on-5, goalie-less offense in search of an equalizer.

Nothing came of it, as Rapid City failed to get a shot on target and dropped a 4-3 result at The Monument to split the season-opening series with Tulsa.

“I can tell you this; there’s a lot of learning to do,” Rush head coach Scott Burt said. “We have a young group of guys, and with that being said, the more games that they play the more they’ll mature. The more situations they see themselves in, they’ll learn.”

On the positive side, rookies Tristan Thompson and Ryan Valentini both tallied their first-career ECHL goals. Dave Tendeck made his second consecutive start between the pipes and stopped 25 of 29 shots.

“They’re part of that youth group and wave of players who we have in here,” Burt said. “It’s good for those guys to get confidence.”

It took all of 1:34 to silence a 76% capacity crowd at The Monument after Jordan Ernst stuffed in a rebound to give the Oilers (1-1-0) an early lead.

It wasn’t long, however, before the Rush (1-1-0) fired back when Thompson, a Canmore, Alberta native, one-timed a pass from Hudson Elynuik and converted on a power play to make it 1-1 at 15:41 of the first period.

“Tristan Thompson’s a younger player with great offensive instincts,” Burt said. “As a young guy coming in, he’s been thrown in the role where he’s now running the power play, and has never been put in that.”

Shortly after a slew of penalties that led to multiple 4-on-4s and a 4-on-3 to begin the middle frame, Dylan Sadowy unleashed a backdoor one-timer on the stick-side of Tendeck off a 3-on-1 attack to give Tulsa a 2-1 advantage at 2:38.

Rapid City leveled things again in the final minute of the period when Valentini led a 3-on-1 attack. The 24-year-old fed the puck to Logan Nelson, who fired a shot that was deflected, only to land directly in front of Alec Butcher, who put away a backhander with 45.8 seconds left.

Just in time to tie it up at the end of the period! pic.twitter.com/7p8FkNiYQB

Valentini gave the Rush their first lead of the night at 5:28 of the third period when he corralled an Oilers turnover and snapped a shot that bounced off Tulsa goalie Daniel Mannella and snuck into the net.

“Valentini is a player who’s very skilled,” Burt said. “As he matures and grows at this level, he’s going to learn how to play a 200-foot game.”

Tulsa made the contest even for the third time when Alex Gilmour blasted a wrister from the right circle that Tendeck may or may not have seen sail past him at 9:42.

Sadowy notched his second goal of the game, the Oilers’ go-ahead score at 18:59, off a 3-on-1 attack and a fortunate deflection off a skate that helped give Tulsa its first victory of the 2021-22 season. A collision in net led to an officials review but the goal was quickly confirmed.

“I don’t know if it was uncharacteristic but it was a rookie mistake,” Burt said. “We left Tendeck out to dry and unfortunately they got lucky when it went off the skate.”

The Rush will travel to Boise to take on the Idaho Steelheads, Burt’s former team where he served as an assistant, for a two-game set Friday and Saturday. They’ll return home Nov. 10.

“We need to be a little bit tighter in the defensive zone. I thought we gave up a lot of odd-man rushes and we left our goalie out to dry at times,” Burt said. “We’re just going to continue to learn. We’ll watch some video, we’ll learn and we’ll prepare for the next series.

Rapid City Rush goalie Dave Tendeck is crashed into as the Tulsa Oilers score the go-ahead goal Saturday at The Monument. 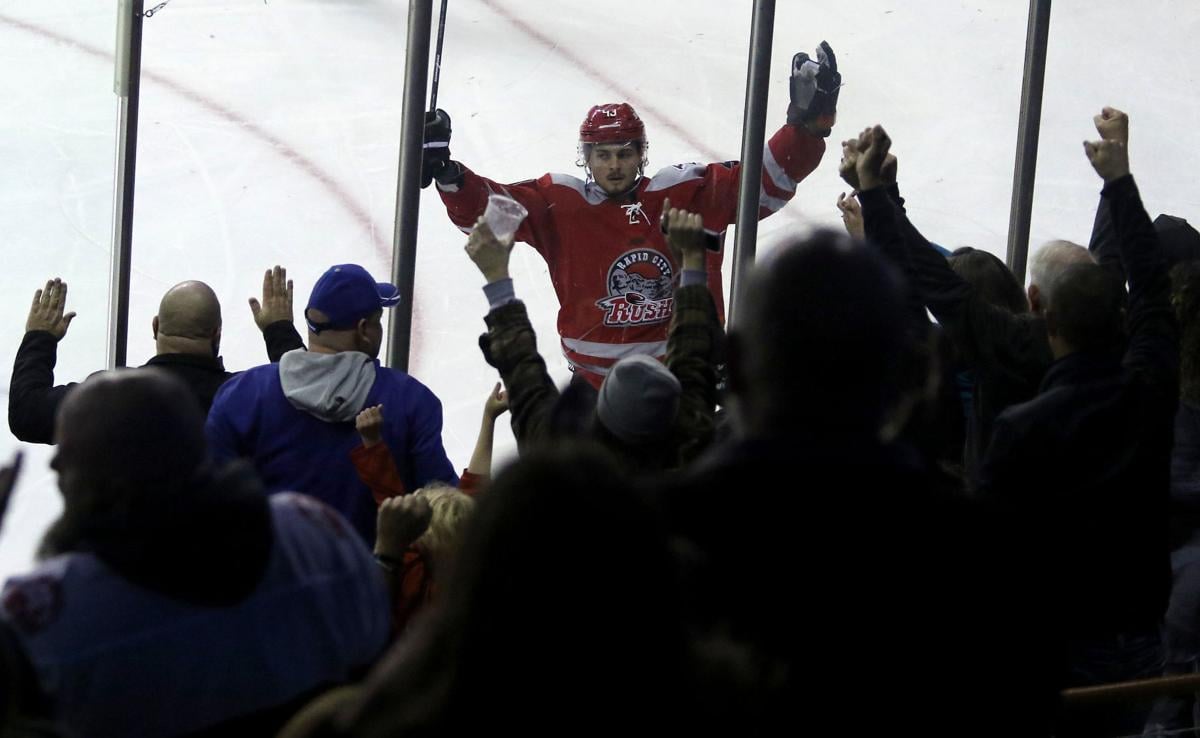 Rapid City forward Ryan Valentini celebrates with the crowd after scoring the third goal of the game for the Rush on Saturday at The Monument. 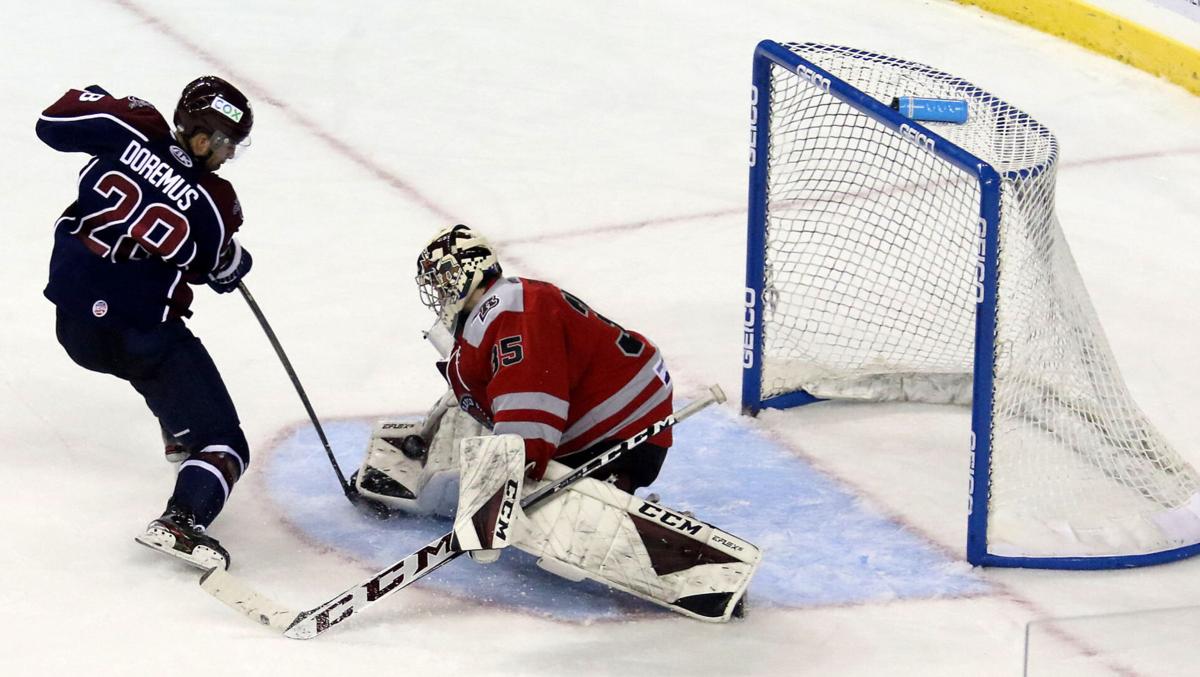 Rush goalie David Tendeck gets his right pad to a short-handed breakaway shot to keep the score tied 2-2 at the end of the second period Saturday night.