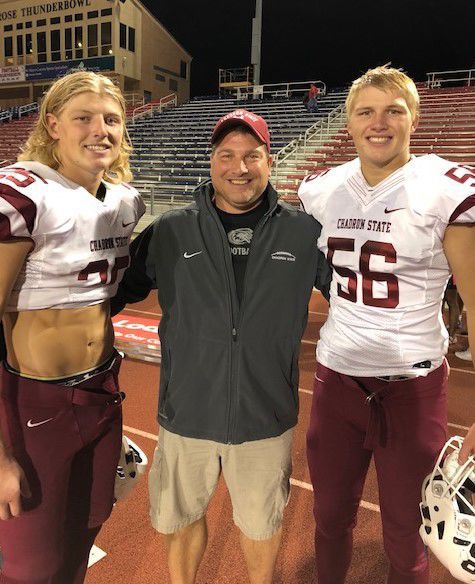 Brothers Cole, left, and Chase Thurness are pictured with their father, Brent Thurness, after a Chadron State College football game. Cole is a starting slot receiver and Chase the starting long and short snapper and special teams standout. 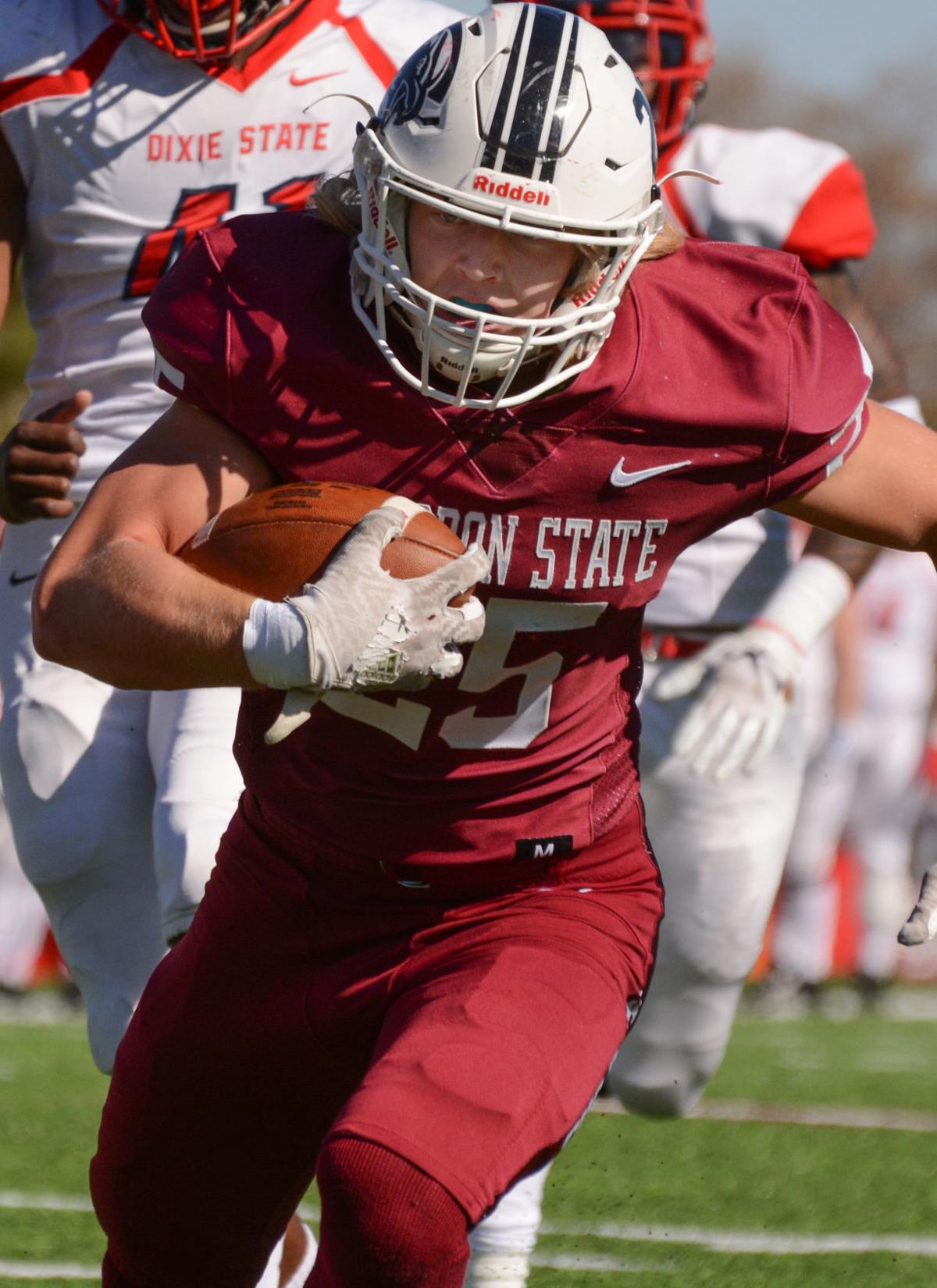 Brothers Cole and Chase Thurness have played sports together — particularly football — since they were barely old enough to play sports.

And maybe even before that.

They’ll get one more year together this fall if things go as planned as members of the Chadron State College football team. Cole is a senior starting wide receiver and Chase, a junior, is the starting long snapper and special teams’ standout.

Both are former St. Thomas More graduates and all-state performers. Both have worked their way up the depth charts to excel for the Eagles.

“I've played with Chase since we were old enough to play football," Cole said. "He's always played up with me as I am a year older. The only year that we have never played together was my freshman year at college and his senior year at high school. I was extremely ecstatic when he decided to come to Chadron and be able to play a couple more years of football together. I love it. We're really close on and off the field.”

For Chase, it’s all about a brotherly love kind of bond. He said they are always trying to compete and make themselves better.

“If I screw up, he tells me what is going on and what I can do to improve. If he screws up, I tell him the same," Chase said. "We just work on our mistakes and help each other. If I go out to long snap, he comes out to long snap with me. If he runs routes, I throw him some balls when Dalton (Holst) is not around. We always talk football.”

The Thurness brothers credit their father, Brent Thurness, a St. Thomas More assistant coach, as their role model on and off the field, and for their work ethic.

“Coming to college and not having him by my side every game was a little different," Cole said of his dad. "But whenever I go home, he's my lifting partner, he is the guy who pushes me every summer. The man has made me better on and off the field. I'm very lucky to have him. He's one of my best friends.”

Added Chase: “Dad began teaching Cole and I how to catch the ball and run when we were young, just for the love of the sport and how good this sport is to all of us. Every day he is helping us out trying to make us better athletes. He loves watching Cole and I compete to be where we are today. It’s great having him around. He is one of the best role models that I have, and a great influence that Cole and I have."

Cole said he had never stayed a summer in Chadron before, so he was really excited to come down and work with his teammates. He estimates that there are about 65 or 70 players on campus now, with about 40 working out in the morning and the rest in the afternoon.

They are meeting two or three times a week with the Eagles new offensive coordinator (Micah Smith), since they didn’t get much of a spring season.

It was an extremely different spring, Cole said.

"After spring break, everybody came back to school because it didn’t cancel until that Sunday right before we were supposed to report back. It was really weird not being able to see the guys for so many months," Cole said. "Having that much time apart and being able to come back to campus, it is nice to be around everybody again and all of the coaches."

Cole spent the first half of the summer in Gillette, Wyo., working out with his quarterback, Holst, as well as his father.

"It was really nice to spend a couple of months with him (Holst) before we came back down to Chadron," Cole said. "Anything I can do to understand where he is going to place the ball or get our connection better, I like to do that."

Chase, meanwhile, was in Rapid City and worked out with his sister, Emma, and STM and Eagles' teammate Kobe Whipple and other former Cavaliers who are going to Chadron State this fall.

Chase also worked with his sister at the Black Hills Tennis Center before going down to Chadron to be with Cole on June 12.

"I played a lot of tennis with my sister to get movement speed," he said.

From defense to one of the top RMAC receivers

Cole, at 6-foot and 200 pounds, came to Chadron State on the defensive side of the football, but eventually moved over to the offense and has been a key component to the potent Eagle offense.

Also contributing on special teams, he caught 13 passes his redshirt freshman season, 46 passes for 701 yards and seven touchdowns his sophomore campaign (team leader in both categories) and 65 catches for 827 yards and eight scores last season (second on the team).

"I was excited to come to Chadron and play safety; I love defense,” he said. “But when the opportunity presented itself, they asked me to move to offense, which I was fine with. Maybe it gets me a little more playing time at a younger age. It has worked out fine. Being so close to Dalton Holst has been a huge help. He's been one of my really good friends throughout college. I think the interaction on and off the field has made a really big difference.”

Cole is excited to see where the Eagles go this season. They were 6-4 in Rocky Mountain Athletic Conference play and 6-5 overall in 2019.

“Our defense is looking good. They have been having a few practices and our offense is meeting two or three times a week," he said. "We haven’t put pads on for so long, I want to get out and start hitting and see what we are made of."

Although this will be his final season at Chadron State, Cole said he would like to have an opportunity to play football after college.

He said there have been a couple of NFL scouts on campus, as well as some Canadian Football League scouts to look at graduated receiver Tevon Wright. Cole's name has been thrown in there as well. Recently he was mentioned in the Matt & Marty's Pro Scouting Report for 2020 in the "Top 20 D-II Receivers We're Watching for the 2021 Draft."

Cole has also been in contact with former STM and South Dakota School of Mines quarterback Jakeb Sullivan, who is playing football overseas.

“I've contacted him a couple of times just for some pointers and who to reach out to,” he said.

The long and short of hiking the football

A year behind Cole, it didn’t take long for Chase to get an opportunity, although he redshirted like most freshmen do.

By chance, head coach Jay Long went over to the redshirts and asked if any of them knew how to long snap. Three players, including Chase, raised their hands and all three were given an opportunity to be “dummy long snappers.”

“In high school I was the long snapper and short snapper, but I never took it serious because I never thought I would go anywhere with it,” he said. “I thought I would play linebacker or defensive end.”

Not only did he improve as a long snapper, he picked up five tackles on special teams his sophomore year and was the special teams' leading tackler last season.

Special teams got him on the football field.

“I talked to my dad all of the time and he said, 'If you can get that long snapping spot, you can start traveling,’” he said. “I started working my butt off and I ended up getting a spot, and I started traveling."

He also eventually moved from just being on the punt team, to all of the special teams — kickoff, kickoff return and punt return.

Again, he convinced his coaches that he deserved to be on the field.

“I went into the special teams coach and said, 'Hey I can run and I can tackle. Can I get on some other special teams?"

Chase had also worked his way up to second string outside linebacker, but a change to a 3-2 defense took that position away. Now, he’s working at defensive end.

He admits that his 6-3, 200-pound frame puts him at a bit of a disadvantage competing against bigger and stronger defensive ends. Thus, he’s also looking at possibly playing other positions.

Being hungry to compete has never been one of Chase’s downfalls.

“I always want to find a spot on the field,” he said. “I have more to prove and more to have for the team. I’ve proven myself on special teams. It’s a great mindset to have, that competing mindset. I want to take that starting spot or take that backup spot. I want to be in the running for those spots.”

Sticking together in the classroom as well

The Thurness brothers are both majoring in criminal justice. When their playing days are done, they naturally have big plans for their future.

Chase points out that the older Cole switched to the same major after he did.

“He followed me,” Chase said with a laugh.

Also in ROTC, Chase said he will have four years after college in the Army or whatever military branch he chooses.

Cole, meanwhile, has reached out to Campbell County Sheriff Scott Matheny, who is a friend to Holst’s family.

“I’ve met with him a couple of times and talked to him about joining the sheriff’s department," Cole said. “Also, a friend at Chadron on the wrestling team just joined to be a deputy at Gillette, so I have a couple of connections. We'll see what happens.”

There’s no sitting still for the Thurness brothers.

Hug a tree in Israel to beat coronavirus blues

Boat crumples like a wad of paper in this epic crash

Boat crumples like a wad of paper in this epic crash

Here’s How to Calm Down Your Anxious Pooch

Here’s How to Calm Down Your Anxious Pooch

How to Create a Sanctuary at Home

How to Create a Sanctuary at Home

Brothers Cole, left, and Chase Thurness are pictured with their father, Brent Thurness, after a Chadron State College football game. Cole is a starting slot receiver and Chase the starting long and short snapper and special teams standout. 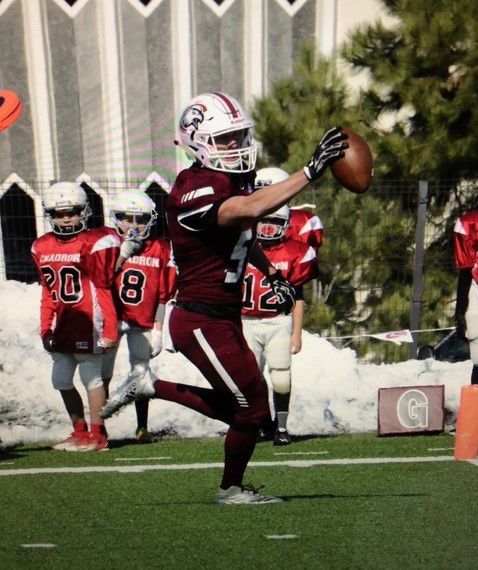