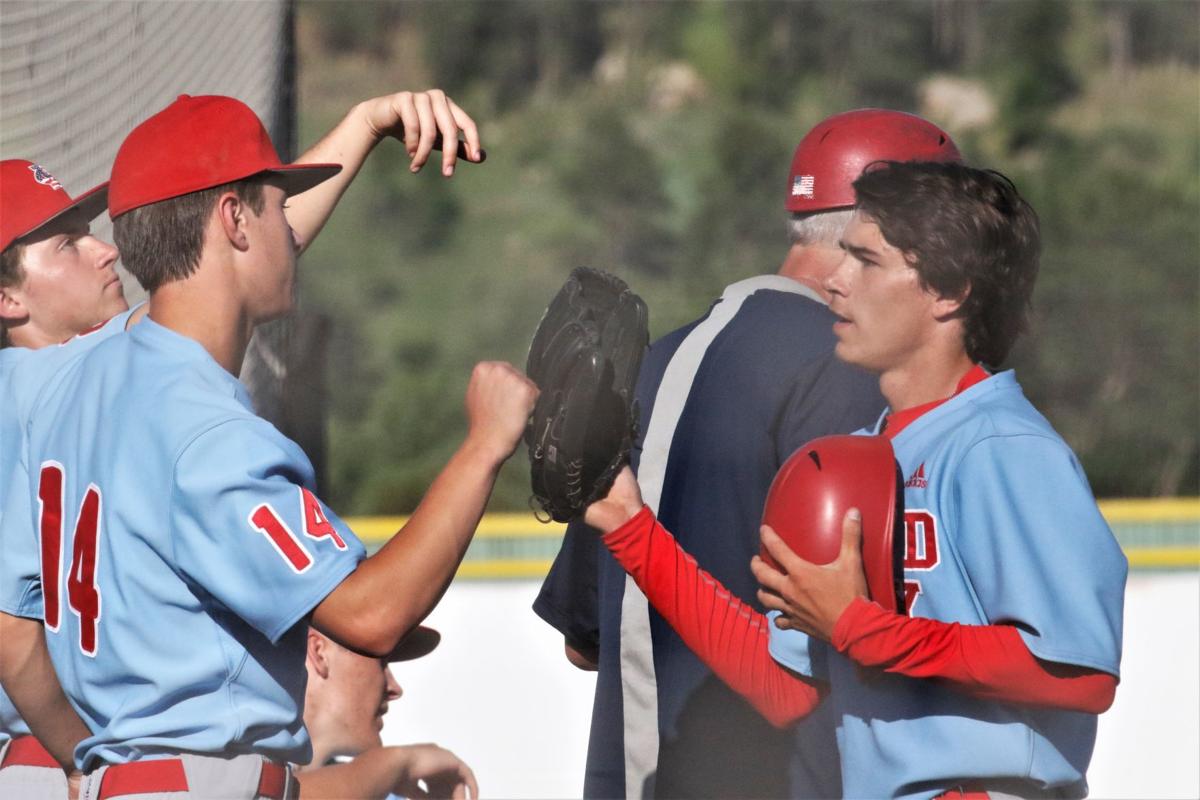 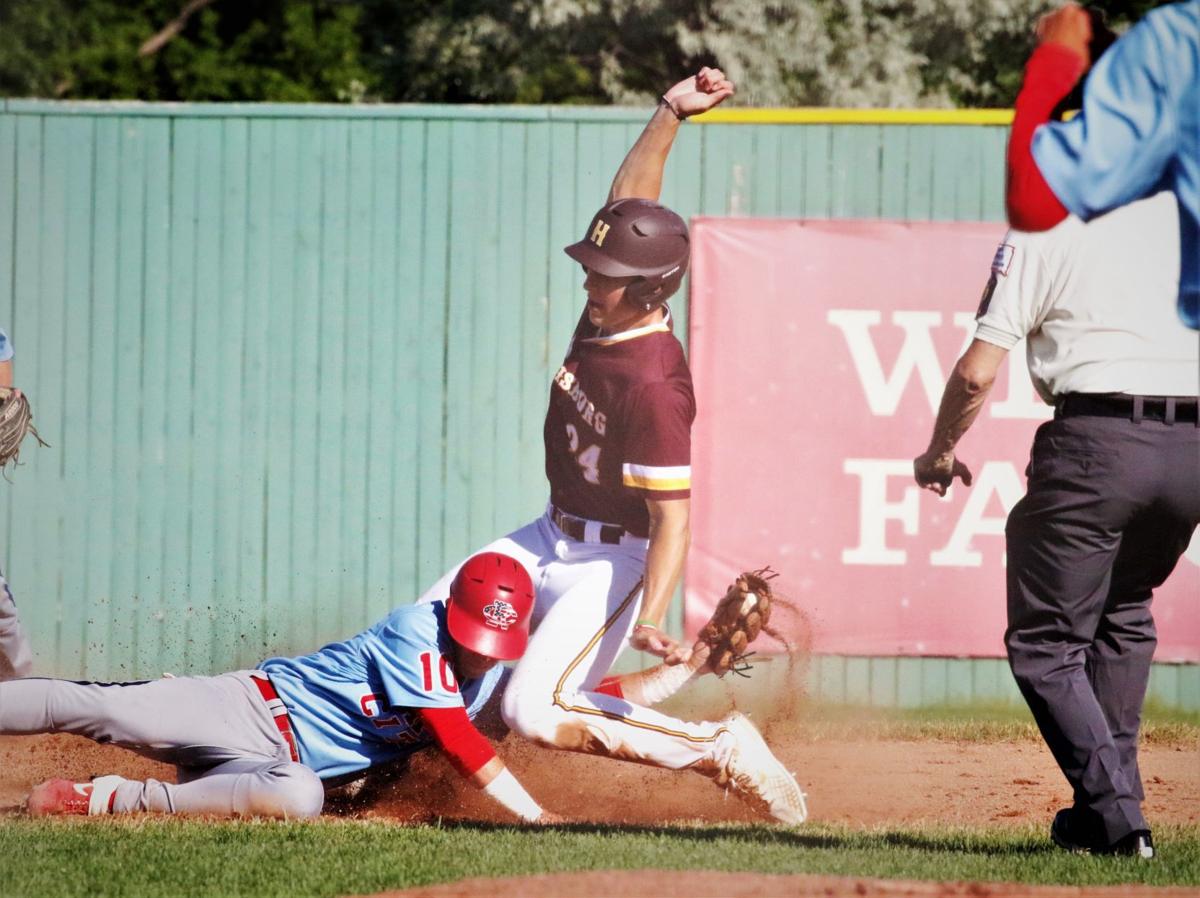 Rapid City Post 22 second baseman Ryan Bachman some how was able to hang on to the ball as he tagged out Harrisburg's Chase Mason Friday afternoon at Fitzgerald Stadium. 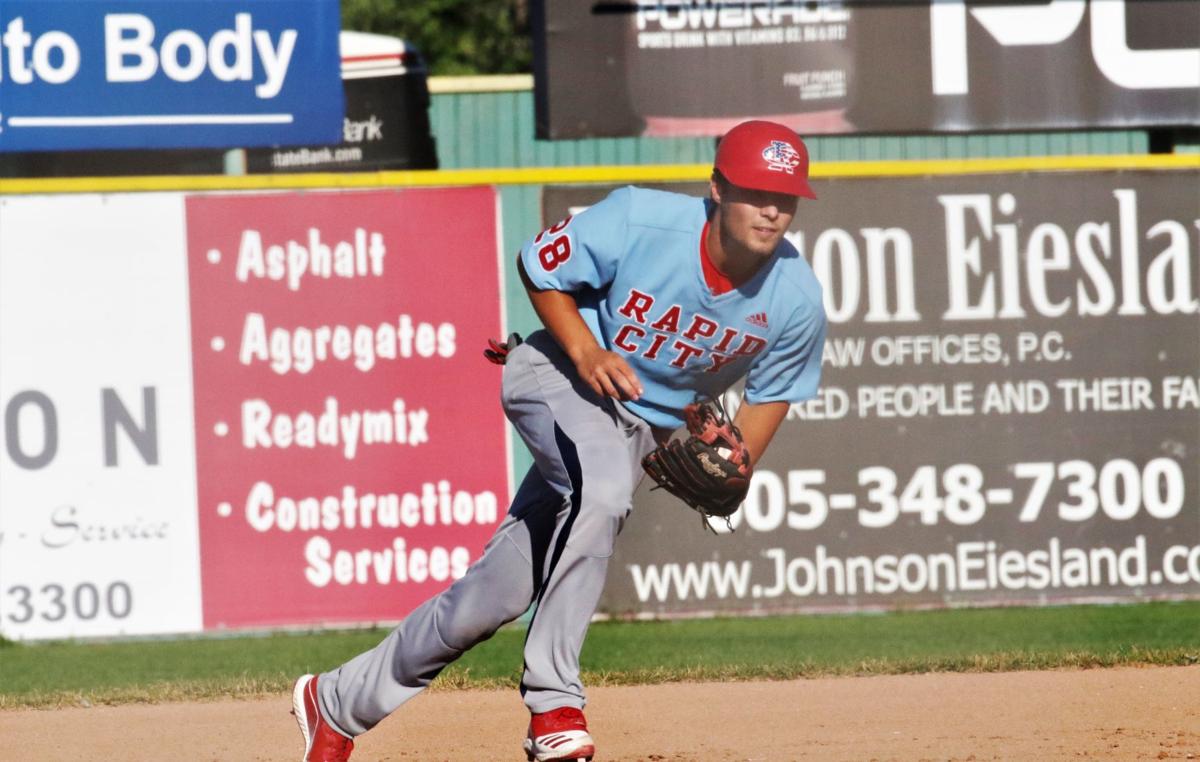 Rapid City Post 22's Dylan Richey scoops up a grounder at third base and made the throw to first against Harrisburg Friday afternoon at Fitzgerald Stadium. 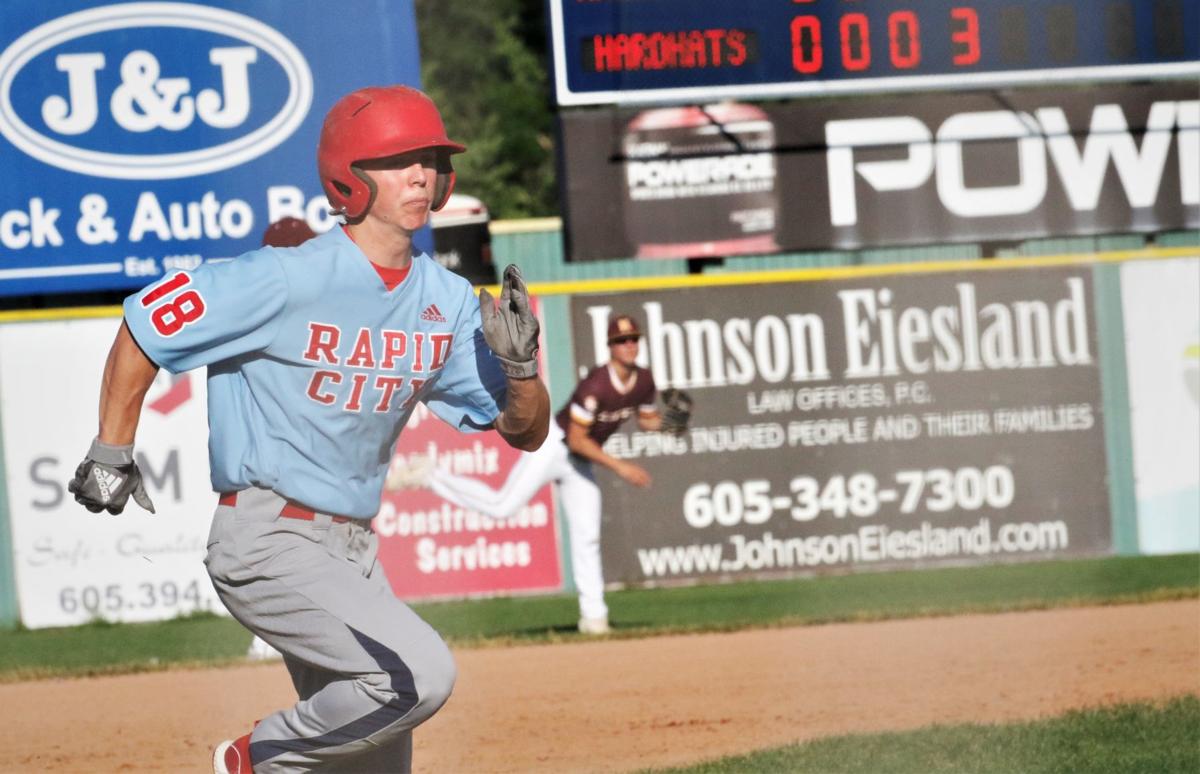 Hunter Tillery isn't a towering presence on the mound, throwing 90 miles per hour or better like some of his teammates.

But he has a bulldog mentality, Post 22 assistant and pitching coach Ryan Klapperich says, and that gets him to the dugout for congratulatory high-fives just the same.

Tillery fell behind 2-0 in the first inning and got out of a big first-and-third-with-one-out jam in the sixth inning as the Hardhats rallied for a 6-2 win over Harrsiburg in the first game of an American Legion doubleheader Friday night at Fitzgerald Stadium.

The same could be said of the Hardhats as a whole, as they rallied back in the nightcap for a thrilling 3-2 win in nine innings as Post 22's Zach Whitesell and Harrisburg's Chase Mason were locked in a spectacular pitching duel before Rapid City would eventually get the win.

Giving up two runs and three hits in the first inning, Tillery picked up the complete-game win by scattering seven hits, walking one and striking out seven.

"It was just all on the mound. It's a mental game and you have to trust your defense behind you, and I did," Tillery said. "I don't have the velocity to strike people out every at-bat, so I just try to throw weak contact and trust the eight people behind me to make the play. They came through and made the plays in both of those innings."

Klapperich said Tillery is a "hurry up and get in the box so I can get you out type of guy."

"He's not afraid of anybody and we love it," Klapperich said. "We love his mentality on the mound. He's got three pitches that he can throw for strikes anytime."

After striking out the first two Harrisburg batters, the Tigers jumped on Tillery with a triple by Payton Metzger, a RBI single by Jack Rabern and a run-scoring single by Mason.

Mason, however, was caught stealing to end the threat.

In the sixth, Harrisburg put runners on first and third with one out before the left-handed Tillery got out of the jam when he picked off Rabern on first base and came back to strike out Mason.

"That was a huge pickoff at first," Tillery said. "I caught him sleeping, and then it was just go right back at the kid at the plate. We had him down two strikes, so I just started throwing to see what we could get him out with."

Again, it was the bulldog mentality, Klapperich said, that got Tillery out of that jam.

"He's looking to get an out somewhere, whether it is at the plate or on the bases," he said. "We love putting him out there for just that reason."

Trailing 2-0, the Hardhats got on the board on a solo home run to the opposite field by Ryan Bachman, his second round-tripper in two games.

Post 22 kept going with a single by Dylan Richey, a RBI double by Jake Goble, walks to Isaac Arnold and Peyton Tipton to load the bases. Rapid City tied the game at 2-2 on a RBI hit-by-pitch to Thomas Maguire, followed by a two-run single by Jed Jenson and a RBI sacrifice fly by Eli Oxner.

In the nightcap, Whitesell and Mason were both dealing in a 1-1 game that went into extra innings.

Both teams scored a run in the eighth inning, and with Mason now out of the game, the Hardhats loaded the bases against Rabern on a walk to Bachman, a sacrifice bunt by Drew Scherbenske, a walk to Goble and a hit-by-pitch to Tipton.

Catcher Dalton Klosterman, who tied the game at 2-2 in the eighth when he stole third and scored on a wild throw fro the catcher, picked up an RBI walk for the game-winner.

"We competed," Post 22 manager Kelvin Torve said. "That guy (Mason), who started, is one of the best pitchers we have seen all year. He struck out a bunch of our guys, but we competed. We kept going and kept going, and we found a way to score."

Mason struck out 16 Hardhats in eight innings, giving up five hits and two runs. Whitesell was nearly as dominant, as he no-hit the Tigers through 5 1/3 innings and left after six giving up one hit and one earned run, walking four and striking out 10.

"That is the Zach Whitesell we are used to seeing," Torve said. "I hope it is a portent for things to come, because he dominated for six innings. He did a great job."

Tad Scherbenske picked up the win, giving up one run on three hits in three innings. Harrisburg, 15-9, took a 2-1 lead on back-to-back doubles by Tyson Kogel and Zeb Wede to lead off the eighth.

It was the Hardhats' fifth straight strong pitching effort this week, going back to Richey's performance over Post 320 on Tuesday and back-to-back outstanding efforts by Jake Goble and Bransen Kuehl Thursday night.

"It's starting to get to the time of the year when we start extending guys and letting them get settled in, instead of, 'Well, you have a rough first inning and you're already at this many pitches so we have to pull you,'" Klapperich said. "They are extending into the 70-80-90 pitch range and they are settling in and throwing strikes."

Richey, who ended up spraining an ankle in the seventh inning rounding first after a hit, knocked in the Hardhats' first run with a single.

Post 22, 14-5, will now prepare for the annual Firecracker Tournament Wednesday through Saturday. Torve said they need to get healthy.

"We have three of our best hitters are hurt right now," he said. "Thankfully we have four days to get well and get ready for the Firecracker."

Rapid City Post 22 second baseman Ryan Bachman some how was able to hang on to the ball as he tagged out Harrisburg's Chase Mason Friday afternoon at Fitzgerald Stadium.

Rapid City Post 22's Dylan Richey scoops up a grounder at third base and made the throw to first against Harrisburg Friday afternoon at Fitzgerald Stadium.