WALL — During Sunday’s practice, Wall football head coach Lex Heathershaw turned on the scoreboard at the team’s turf field and set the score to 21-17, a score that has hung over the heads of the Eagles for the past 10 months.

It was the final result of last year’s Class 9A semifinal between Wall and Howard, a loss for the Eagles in a near-upset that saw them surrender a lead and shut out in the fourth quarter, giving them back-to-back semifinal losses.

“Just kind of reminding us that we’re right there. We’re a contending team, but we’ve still got work to do to get there,” junior quarterback Burk Blasius said. “The whole summer it’s kind of haunted us.”

With an abundance of returning players, all but one on defense and three on offense, Wall is determined to finally break through and secure a spot at the DakotaDome in Vermillion. Heathershaw, entering his sixth year at the helm and has his entire coaching staff back for the third straight season, said the team culture is there and that there’s a lot of hype around town.

“I think they’re hungry. They’ve been working at it for five years,” Heathershaw said. “Everything is built up to a moment, and I think the biggest key for us is to just not let that moment get too big.”

Among their returners, the Eagles bring back a heavy load of skill players. Cedar Amiotte, last year’s Best of the West 9-Man Player of the Year, enters his senior season after rushing for 1,195 yards and 17 touchdowns at running back and intercepting five passes at defensive back as a junior. He said his squad’s semifinal loss is fuel for this year.

“Now we have that under our belts,” he said. “So every time someone is slacking off, we just talk about 21-17 and staying focused or the same thing will happen, and it makes us way more mentally prepared than we were coming into that game.”

Blasius, a Best of the West selection from last year as well, returns for his third season starting under center after throwing for 1,268 yards and 17 touchdowns while adding 495 yards on the ground.

He said he’s aware of the mistakes he made against Howard, and is determined to not let them happen again. He has the benefit, too, of being able to start the season with a plethora of returning teammates who already have the bond and chemistry needed for a deep playoff run.

Receiver/defensive back Rylan McDonnell, lineman Norman Livermont, running back/linebacker Mason Heath and tight end/linebacker/kicker Blair Blasius join Amiotte and Burk Blasius as the core group of returning players. All four are seniors and all were Best of the West selections last year.

“It’s comforting when you come back to have that bond and not have to start over with a new set of kids,” Burk Blasius said.

The biggest holes Wall needs to fill is on its offensive line, Heathershaw said, following the graduation of Cayne Krogman, Kohl Sandal and Reid Hansen. For Heathershaw, his team is only as good as their players in the trenches.

In trying to accomplish their ultimate goal, the Eagles have shifted classes again, being moved up to Class 9AA. They’re still facing six of the same opponents as last year, however, and with how often 9-man teams change classifications, Heathershaw said the competition doesn’t change much.

“In small-school South Dakota it’s just, can you ride the wave with your team, and we’ve been fortunate enough to be able to ride that wave, we’ve just got to break that barrier and hopefully crack it into the state championship and give ourselves a chance.”

Wall blazed through its regular-season slate in 2021, beating opponents by an average of 42-10, and will only see two new ones in Bennett County, which is transitioning from 11-man, and Kimball/White Lake. Still, Heathershaw doesn’t want his squad to look past anyone.

“It’s not like we’re not playing competitive teams, I think it’s just that we know each other well, and that’s actually what can be scary sometimes when you play those teams,” he said. “They get to know you and can kind of surprise you sometimes.”

Amiotte echoed that sentiment, and said his teammates can’t forget their ultimate goal as the daily grind of the season progresses.

“I think it’s just staying more focused year-round,” he said. “Once we start beating on teams here and there, we start relaxing, thinking we’re good and then we get hit in the mouth in the quarterfinals and semifinals every year, so I think we’ll be able to keep it more intense all year.”

Must see! Drone pilot captures video of volcano inches away from eruption

Florida's island dwellers continue to dig out from Ian

Florida's island dwellers continue to dig out from Ian 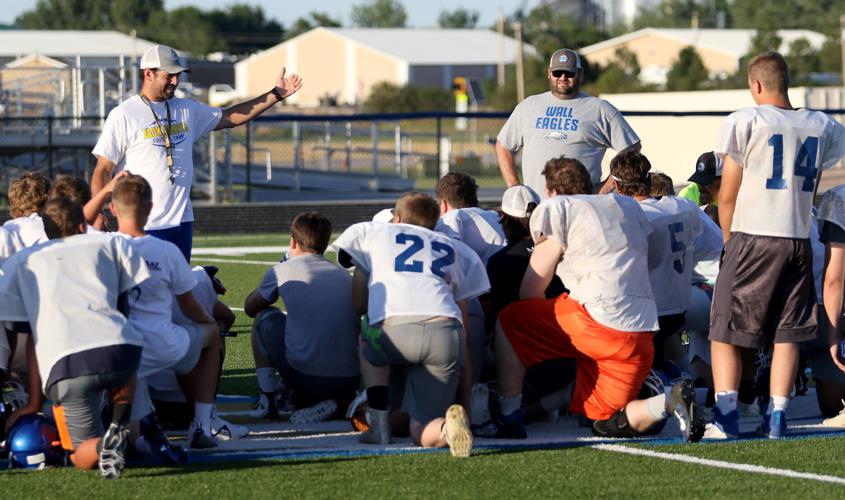 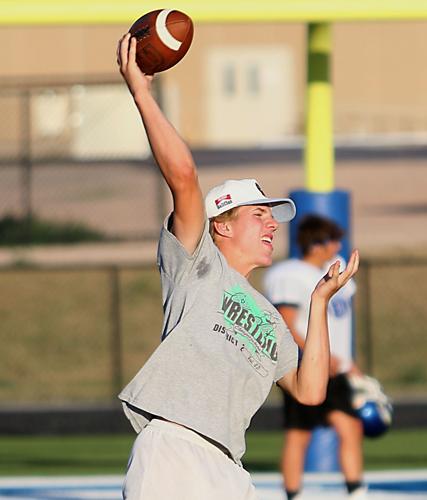 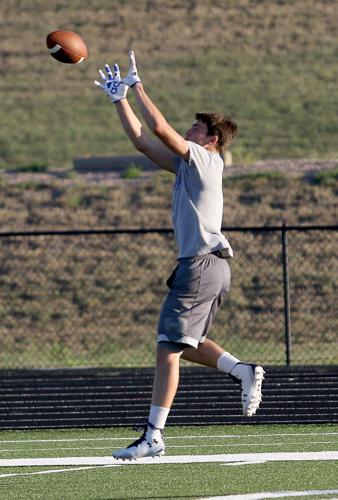 Wall's Cedar Amiotte makes a leaping grab in passing drills before the team put on pads for practice Monday night in Wall.