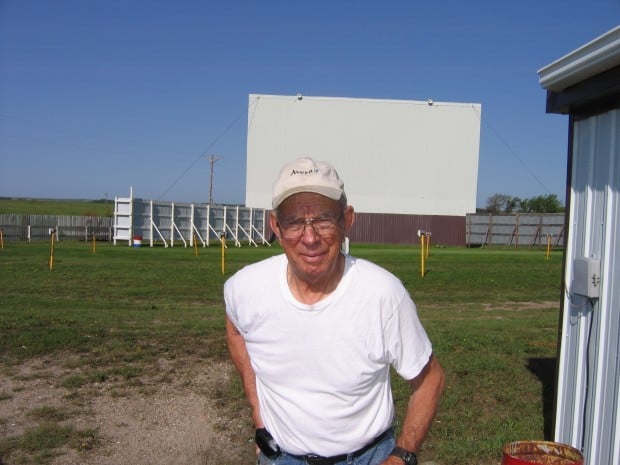 Photo by Steve Miller, Journal correspondent. Cecil Harsin takes a break from fence-building on the grounds of the Hilltop Drive-In Theater in Gregory, where he has worked since 1954. He also mows the grass, takes care of the maintenance and runs the movie projector. He bought the drive-in in 1993. 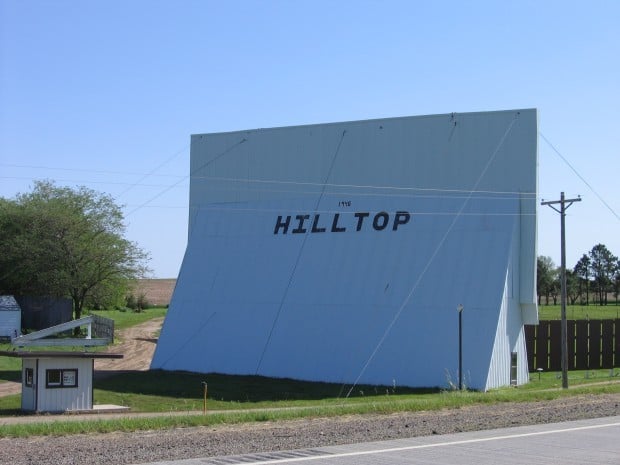 Photo by Steve Miller, Journal correspondent The Hilltop Drive-In Theater, built in 1946, has a 72- by 40-foot screen. 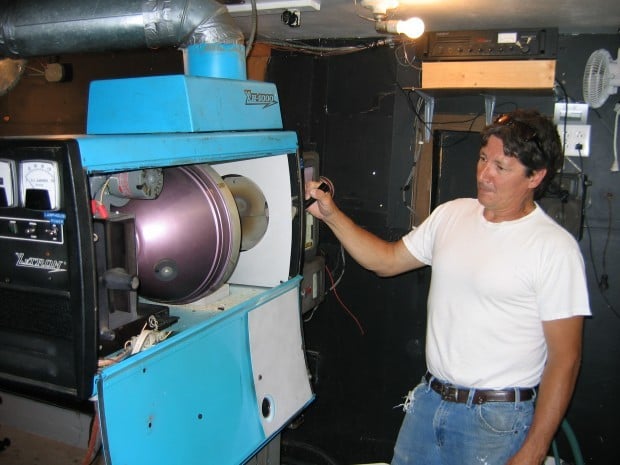 I loved it when Mom loaded me and my brothers into our yellow '54 Buick, packed some popcorn and orange juice and took us to the East Park Drive-In movie theater near Watertown.

It was the mid-'50s, about the time Cecil Harsin started running the projector at the Hilltop Drive-In at Gregory.

Harsin, now 81, still runs the projector at the Gregory drive-in. He, along with his family, operates the Hilltop, just 30 miles away from another still-operating drive-in theater in Winner.

I drove past the Winner Drive-In Theatre last month on my way east on U.S. Highway 18 and remembered Deanna Darr's column in the Journal a few weeks ago on the Winner drive-in's 50th anniversary.

So I was surprised when another big white outdoor screen came into view just before I got to Gregory.

I figured the drive-in was probably abandoned until I saw that the grass around the speaker posts was neatly mowed.

Turns out that Cecil Harsin mows the grass, takes care of the maintenance and runs the projector at the Hilltop, where you can still catch a movie on Friday, Saturday and Sunday nights during the summer.

Cecil started running the projector at the Hilltop in 1954. It was a part-time job for years while he worked at the Gregory County highway shop. But he bought the theater in 1989, when the previous owners threatened to close it. He retired from the county in 1993.

The Harsins book first-run movies that are in the top tier of popularity nationwide.

"If you don't keep good movies, nobody goes," Cecil said.

It is among only a handful of drive-ins still operating.

"They're slowly making a comeback," Louie said as he gave me a tour of the place.

But Louie doesn't much like most of the modern movies, including the one showing the week I was there, "Get Him to the Greek," which has drug use and "a lot of cussing," Louie said.

His wife, Michelle, books the movies, and she said it's hard to get shows for little kids. But they did get "Marmaduke" for the Fourth of July weekend.

The Harsins also have faced some technical challenges, but they've been able to adapt, so far.

The mounted speakers still work, but the Hilltop broadcasts the movies' sound on FM. You drive in, turn your radio to 99.1 and listen to the movie on your car speakers. It's a much better sound quality than the static-prone speakers, he said.

Not many kids park in nearby fields and tune their radio to get the movie, say the Harsins, but some sneak in.

"We know some sneak in," Louie said. But he said he doesn't worry about it "as long as they don't get to really flaunting it in front of us. If you can't sneak in a movie theater once in your life, there's something wrong."

That's something right out of the 1950s, too, although I don't recall ever sneaking in.

But back then, drive-ins would have special prices for carloads. You could pack a lot of teenagers into a '57 Dodge or a '59 Impala.

The Hilltop doesn't do carload specials. "The booking agents don't like it," Louie said.

The Hilltop draws its biggest crowds, including many teens, on Sunday nights, and, depending on the movie, people come from as far away as Platte and Chamberlain.

The Harsins don't turn anybody away. A few years ago, a trucker asked if he could come in and watch the movie. He unhooked his trailer and came in from the exit side with his tractor. "He came back two or three times," Louie said.

Once, they let a bicyclist traveling across the country camp out at the drive-in after he watched the movie. That night it stormed, so Cecil came out and took the young man home. He bought him breakfast in the morning before the cyclist headed west.

The Harsins also are proud of their concession stand, which features chili cheese dogs. And you can still get a small popcorn and a soda for a dollar.

The Harsins intend to keep the drive-in open as long as they can. They are still able to get movies on 35-millimeter film. But a digital projection machine would cost tens of thousands of dollars, Louie said. That would likely force the drive-in to close.

Until then, you can still get popcorn and a movie at the Hilltop. Plus a taste of 1950s America.

Steve Miller, of Rapid City, is a freelance writer. Contact him at wrwriter@rap.midco.net.

The Pennington County Sheriff's Office has released the name of a 56-year-old man who died in jail Wednesday.

One person is dead following a Friday afternoon police shooting at a convenience store in north Rapid City, where the suspect was reportedly h…

Rapid City officials are pleading for more action from the owners of three north side apartment complexes.

A Pennington County judge ruled Monday that a police officer did not violate a 19-year-old murder suspect's rights when the officer detained him.

Photo by Steve Miller, Journal correspondent. Cecil Harsin takes a break from fence-building on the grounds of the Hilltop Drive-In Theater in Gregory, where he has worked since 1954. He also mows the grass, takes care of the maintenance and runs the movie projector. He bought the drive-in in 1993.

Photo by Steve Miller, Journal correspondent The Hilltop Drive-In Theater, built in 1946, has a 72- by 40-foot screen.

Photo by Steve Miller, Journal correspondent Louie Harsin checks out the 35mm film projector used at the Hilltop Drive-In Theater, one of a handful of drive-in theaters left in South Dakota. The owners say the cost of getting a digital projector likely would force them to close.
© Copyright 2023 Rapid City Journal, 507 Main Street Rapid City, SD 57709 | Terms of Use | Privacy Policy | Do Not Sell My Info | Cookie Preferences
Powered by BLOX Content Management System from TownNews.com.
You don't have any notifications.