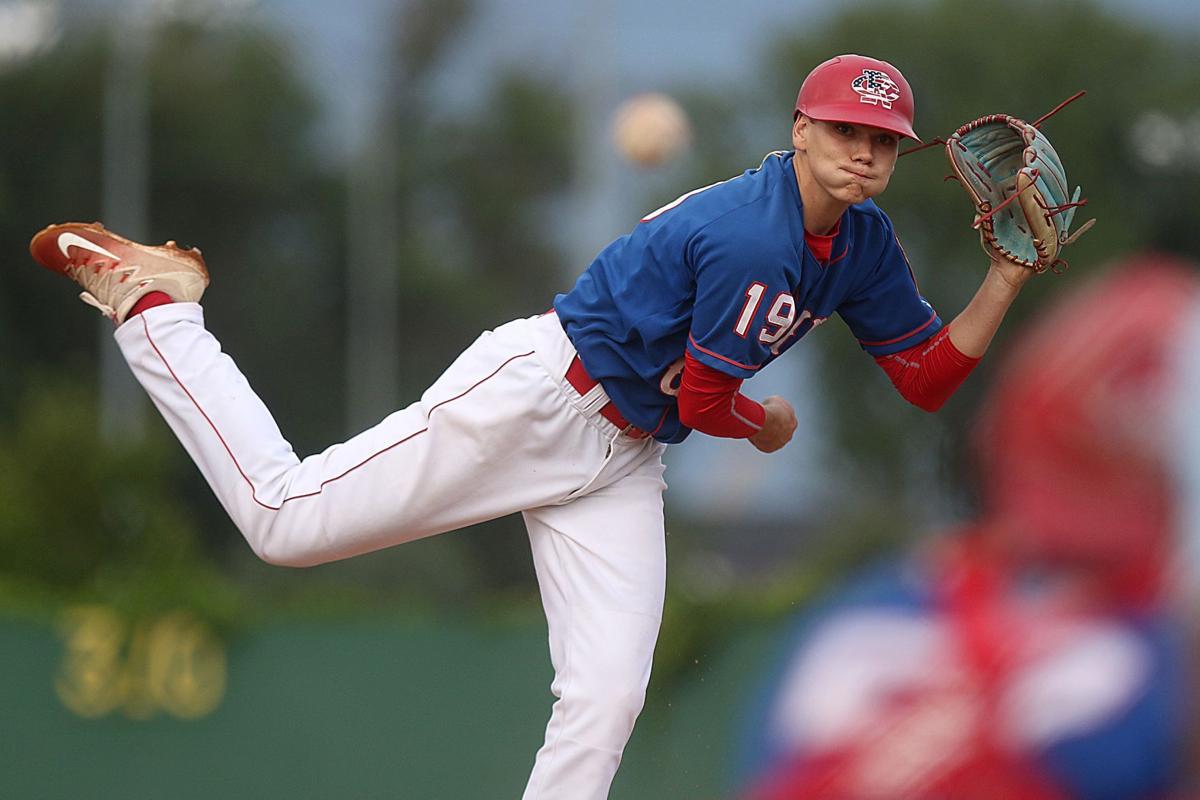 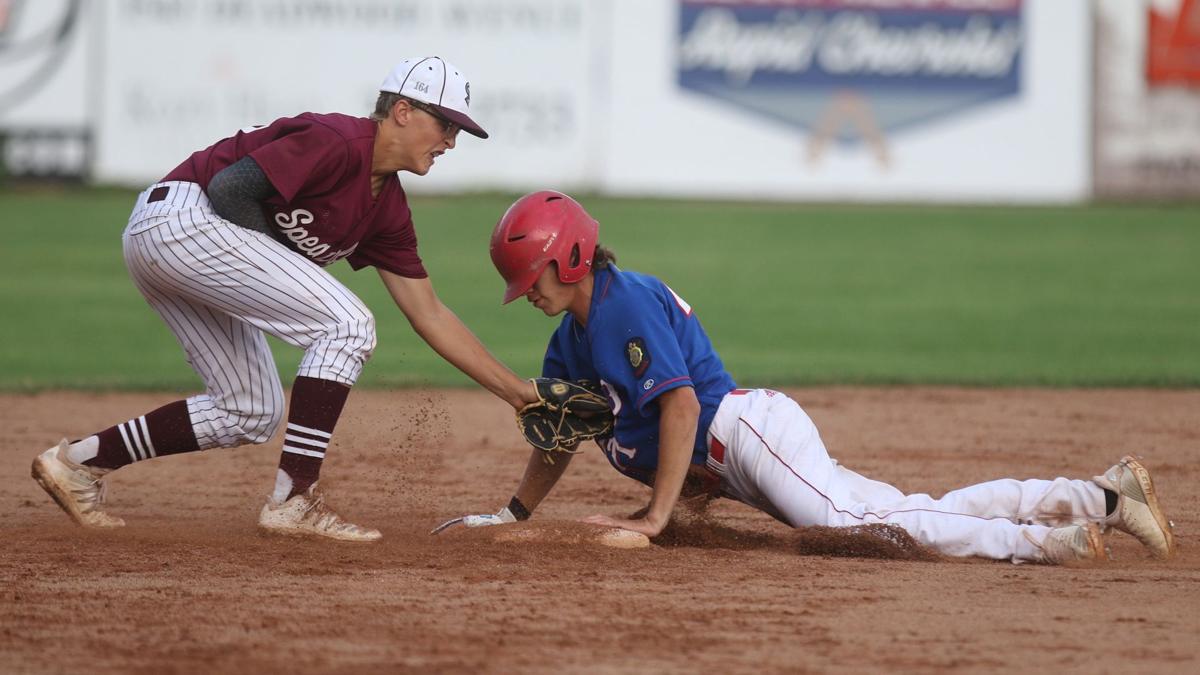 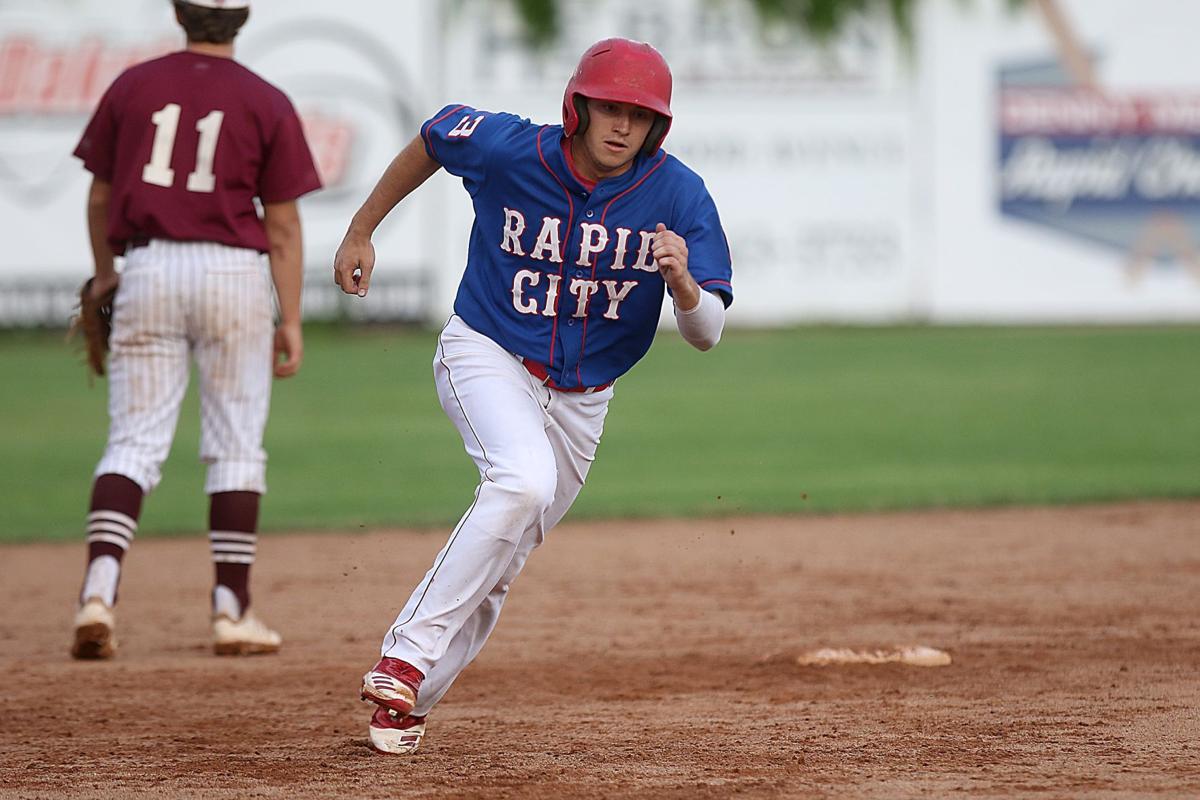 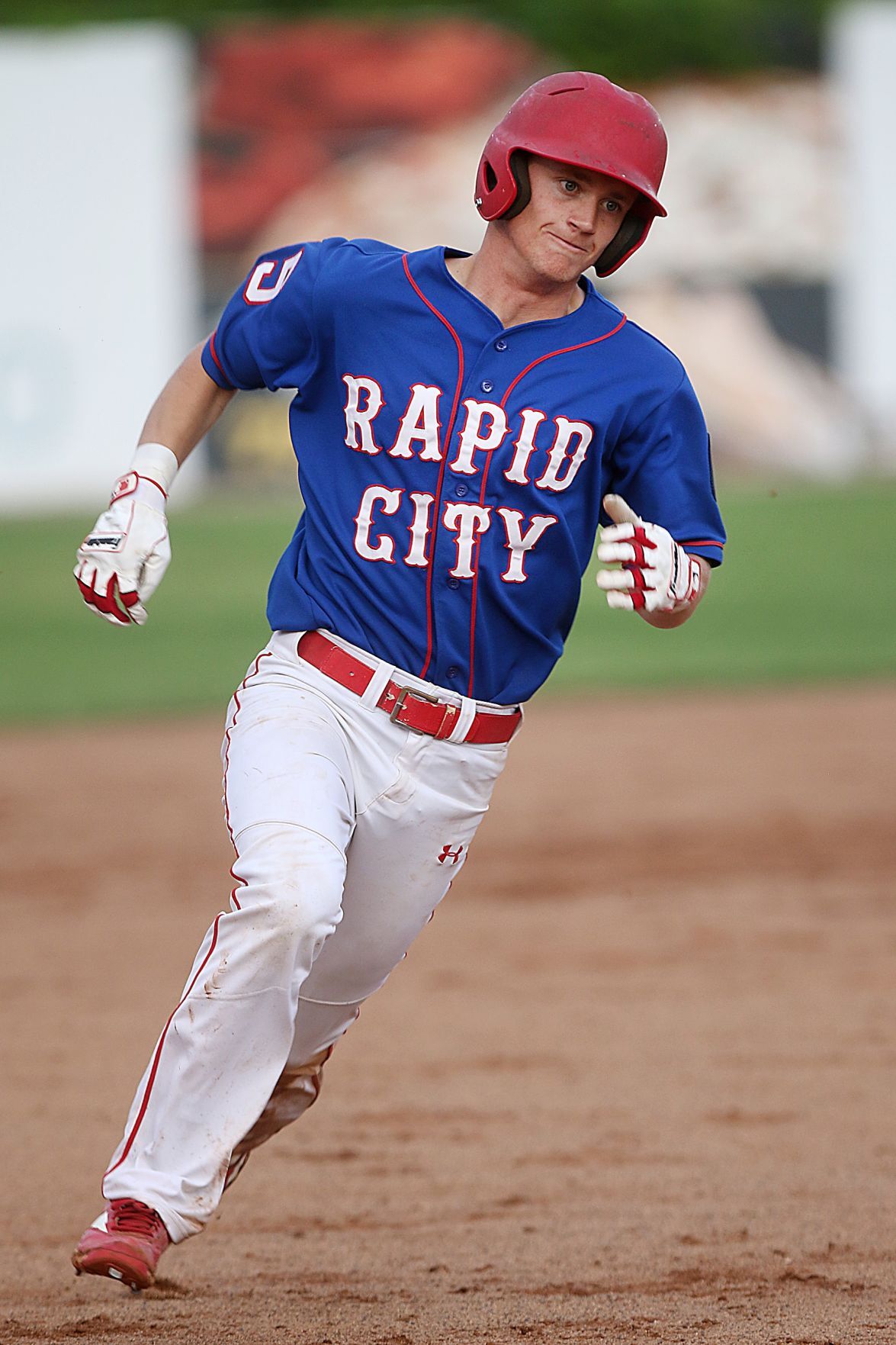 Rapid City Post 22 base runner Matthew Hegre gets ready to round third base on his way to scoring a run during the opening game of the South Dakota American Legion Regional playoffs against Spearfish Post 164 played at Pete Lien Memorial Field.

Rapid City Post 22 opened postseason play about as well as a team can open.

With Fitzgerald Stadium under construction, the No. 1 seeded Hardhats are playing at Pete Lien Memorial Field, and overcame a 70-minute rain delay to run past No. 16 Sturgis 12-1 and 15-0 behind the no-hitters from Zach Whitesell and Jake Goble respectively.

"We expected good things from Jake and from Zach," Post 22 assistant coach Ryan Klapperich said. "Sometimes it is tough with a rain delay, you can't throw in the bullpen and you have to throw off the turf because the mound is bad. They didn't make any excuses and went out and pounded the zone, challenged hitters and got ahead. Even when they were behind they were throwing curveballs on fastball counts. It's tough to hit when your guys are on that that."

The 5 p.m. start lasted about 10 minutes before the rains came, but officials got the tarp on the field in time and play resumed at about 6:30 p.m.

Whitesell, who had to warm his arm up twice, showed no ill affects by throwing a five-inning no-hitter, and Goble did the same in four innings the nightcap.

Whitesell was sharp, giving up just one unearned run in the fourth inning. He finished with 43 strikes on 71 pitches, walking one and striking out seven.

"I knew I had to throw strikes, and I did that and we came out on top," Whitesell said.

Whitesell got the Spearfish lineup one-two-three before having to sit for a while.

"It is definitely kind of hard. You're getting warmed up and having to do it again. It is a process, for sure," he said.

Klapperich said he was happy with how Whitesell bounced back from the rain delay.

"We were talking in the dugout that, 'Should we send him back out there or get somebody else warmed up?" But he is the type of guy that can bounce back pretty well. He can take a break and get back out there,'" he said. "Zach is pretty hard on himself and he'll say he didn't have his best stuff today, but he pounded the zone and challenged hitters, threw strikes when he needed to and did a great job."

The Post 22 bats were a little slow out of the gate, but took advnatage of a little wildness by Spearfish pitcher Alec Sundsted, and scored three runs in the first and one in the second before blowing the game open with a six-run third.

Klapperich said that sometimes it is tough for hitters facing a pitcher that doesn't throw real hard.

"He mixed things up and threw a lot of curve balls. He was behind in the count a lot and our guys weren't used to that," he said. "We see so much velocity throughout the year and he doesn't have a ton of it, so it kept us off balance early. But we chipped away and had the big inning."

Shortstop Ryan Bachman had three hits and three RBI for the Hardhats, while third baseman Matt Hegre and first baseman Hunter Tillery had two hits each. Left fielder Peyton Tipton knocked in three runs, including two with a triple in the third, while center fielder Bransen Kuehl blasted a solo home run in the second.

"We came up short last year, so we're really hungry to get one this year," Whitesell said. "We just have to come out swinging, throw strikes, and get the job done."

Goble was just as dominant in the nightcap, stopping Post 164 with two walks and 11 strikeouts. He threw 66 pitches, with 45 strikes.

Klapperich said it wasn't too difficult to call the pitches for Goble when he was on like he was.

"There are some guys who are hard to call for when I am calling pitches, but tonight was an easier one," he said. "When Jake has his fastball going and the curve-ball tight, it was pretty easy calling the game."

It was a good start to the postseason, Klapperich said, and they will be as home as they can be in their situation.

"We told the guys that if we're still playing baseball, we're the home team," he said. '"You won't have to travel, which is nice. You earned that, but now you have to keep it going and remind people why you are the No. 1 seed. So, that's the goal.'"

Rapid City Post 22 base runner Matthew Hegre gets ready to round third base on his way to scoring a run during the opening game of the South Dakota American Legion Regional playoffs against Spearfish Post 164 played at Pete Lien Memorial Field. 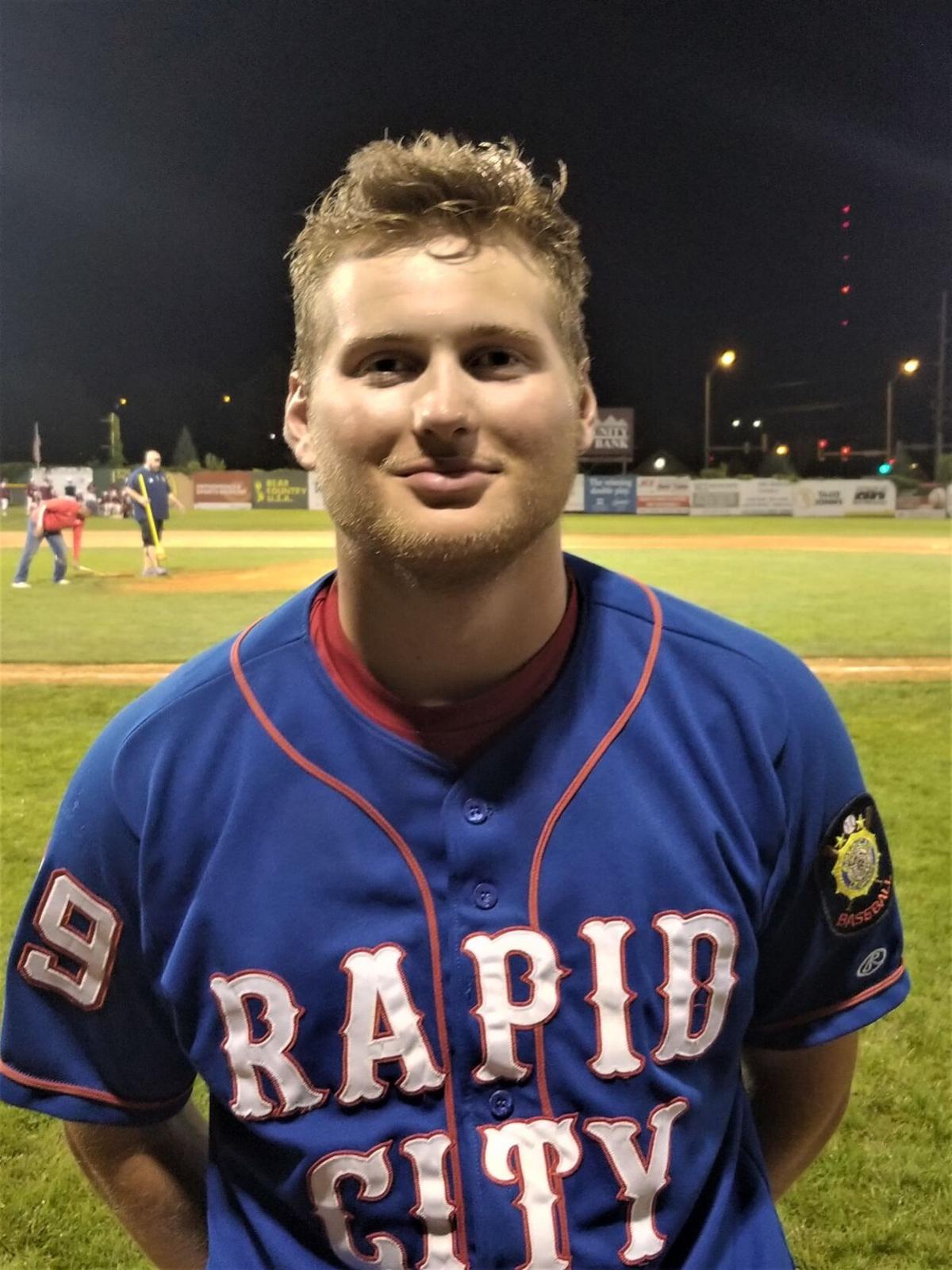