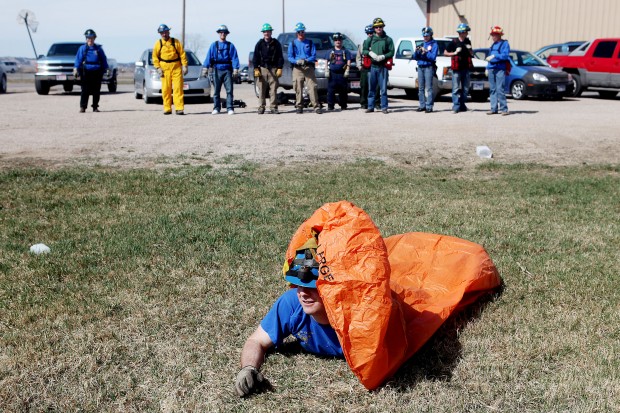 Marshall Keefe peeks out of his fire shelter after deploying a practice shelter during a wild fire refresher course at Rapid Valley Fire Department on Saturday, March 24, 2012. (Kristina Barker/Journal staff) 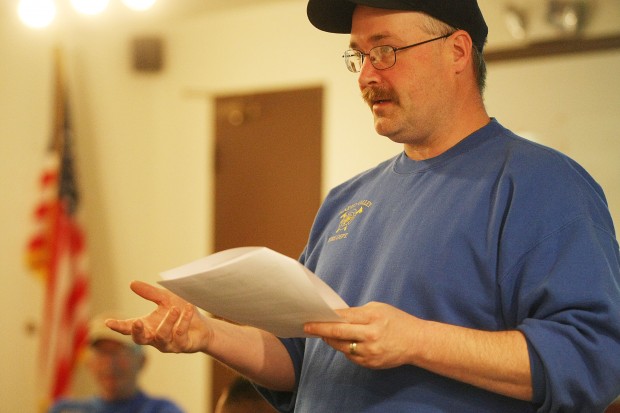 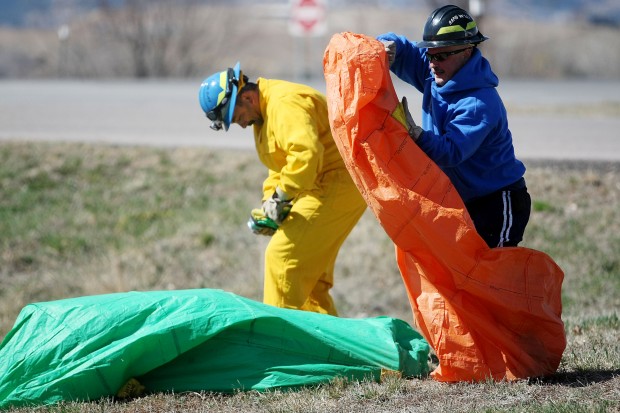 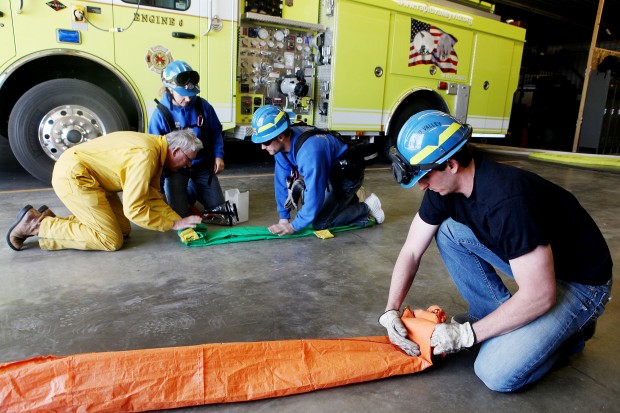 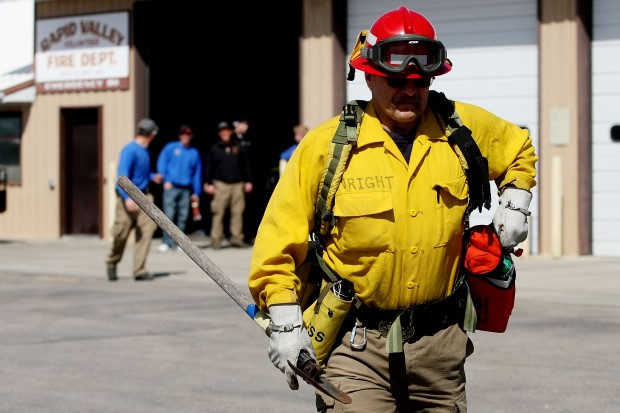 Mark Enright walks out a field in front of the Rapid Valley Fire Department to practice deploying his fire shelter during a wild fire refresher training course on Saturday, March 24, 2012. (Kristina Barker/Journal staff)

“Remember, it’s only grass and trees, it will grow back – you won’t,” firefighter Casey Warren recently admonished a group of firefighters attending a wildland fire refresher course at the Rapid Valley Volunteer Fire Department.

The room was filled with firefighters sacrificing most of their Saturday to prepare themselves for what’s looking like a long, dangerous fire season in the Black Hills and on the grasslands.

In the coming months, the U.S. Forest Service will have approximately 150 people involved with fire this coming summer, according to Todd Pechota, fire management officer with the Black Hills National Forest. The roster will include full-time and seasonal firefighters, aerial support and other necessary staff.

Standing shoulder to shoulder with those firefighters will be equally well-trained volunteer firefighters from throughout the region.

Volunteers are an integral part of fire response in the area, Strain said.

“They’re trained to the same standards as state and federal firefighters,” he said. “They do this on their own time. They do it on the weekends and at nights and when they’re done with their jobs to help us out and their communities.”

Matt Geidel, 22, is a member of the Rapid Valley department. There is a long tradition of fire service in his family. Geidel has worked as a seasonal firefighter for the U.S. Forest Service and believes firefighting is rewarding.

“I can come back and say I helped someone,” he said.

There’s a lot that happens behind the scenes at a fire, including all the hours of training, Jeske said. “You have to know what you’re doing.”

An assistant chief with Rapid Valley, Warren’s day job finds him working as a firefighter/paramedic with the Rapid City Fire Department. He’s a certified South Dakota fire instructor and qualified as a strike team leader. A strike team leader has the skills and training to supervising three-five resources -- engines or trucks -- during a fire.

The Saturday refresher course was designed to update firefighters on everything from radio frequencies to the unusual fire behavior seen this spring.

“The primary purpose of wildland fire training is to save lives,” Pechota said.

“Each fire department or fire district has their own requirements, however, most if not all that participate or respond to incidences within the national forest or on the borders, their requirements are the same as the federal level,” Warren said.

There are departments within the state that don’t require that training, he added.

“But, there are departments that require above and beyond that training, too,” Warren said.

After sitting in a classroom for more than four hours, the firefighters demonstrated their skill at deploying a critical piece of equipment – their personal fire shelter, compacted in a 4-by-6-by-10-inch pouch wildland firefighters carry on their belts.

Deploying the fire shelter has become an “absolute” in wildland fire refresher courses and is an integral part of initial training.

Along with the annual refresher, state firefighters will practice shaking out and climbing into a practice shelter every two weeks during the fire season, he said. “It’s always good to practice that whenever you can.”

There are three different levels to the test, according to Warren.

Firefighters choosing to qualify for the Arduous Pack Test have 45 minutes to complete a 3-mile hike while carrying a 45-pound pack. No running allowed.

The Light Walk Test is a 1-mile hike in 16 minutes without a pack.

“It really makes for a very large wildland firefighting force when you take all the fire departments – career, combination and volunteer,” Gorton said. “That’s a huge amount of resources available in the Black Hills and we have tremendous level of experience and qualifications in that entire firefighting force.”

Federal agencies and the South Dakota Division of Wildland Fire Suppression have the same interagency training standards for volunteer and full-time firefighters responding to a fire.

Firefighters have the option to add additional classes to the individual task books they use to document their acquired skills.

Half a dozen former Rushmore Thunder players made their commitments to the team official, receiving their game jerseys during a ceremony Wednesday at Roosevelt Park Ice Arena

Potentially hazardous asteroid to hurtle past Earth on May 27

Potentially hazardous asteroid to hurtle past Earth on May 27

Marshall Keefe peeks out of his fire shelter after deploying a practice shelter during a wild fire refresher course at Rapid Valley Fire Department on Saturday, March 24, 2012. (Kristina Barker/Journal staff)

Mark Enright walks out a field in front of the Rapid Valley Fire Department to practice deploying his fire shelter during a wild fire refresher training course on Saturday, March 24, 2012. (Kristina Barker/Journal staff)