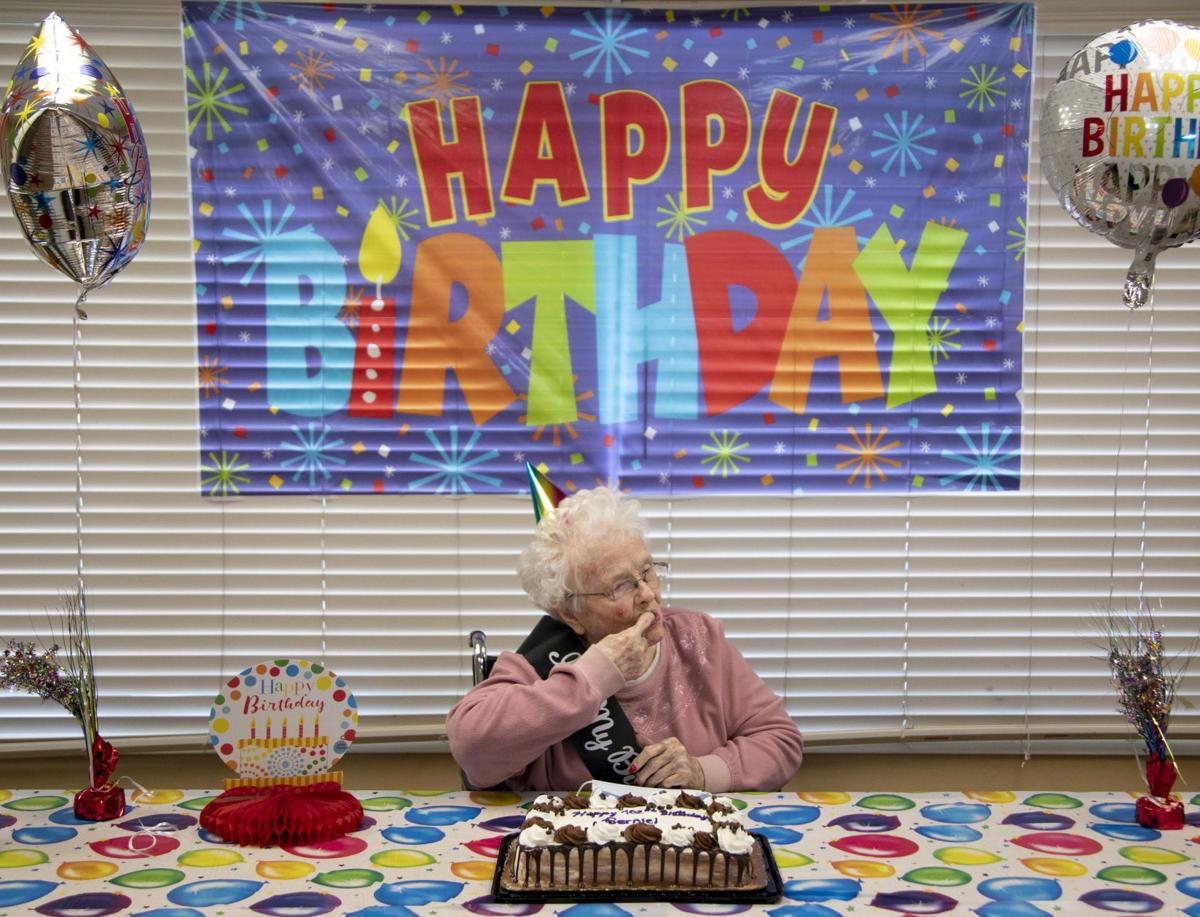 Bernetta "Bernie" DeShazo tastes a bit of frosting from her birthday cake on Wednesday at Avantara Arrowhead in Rapid City. DeShazo will celebrate her 102nd birthday on June 30. 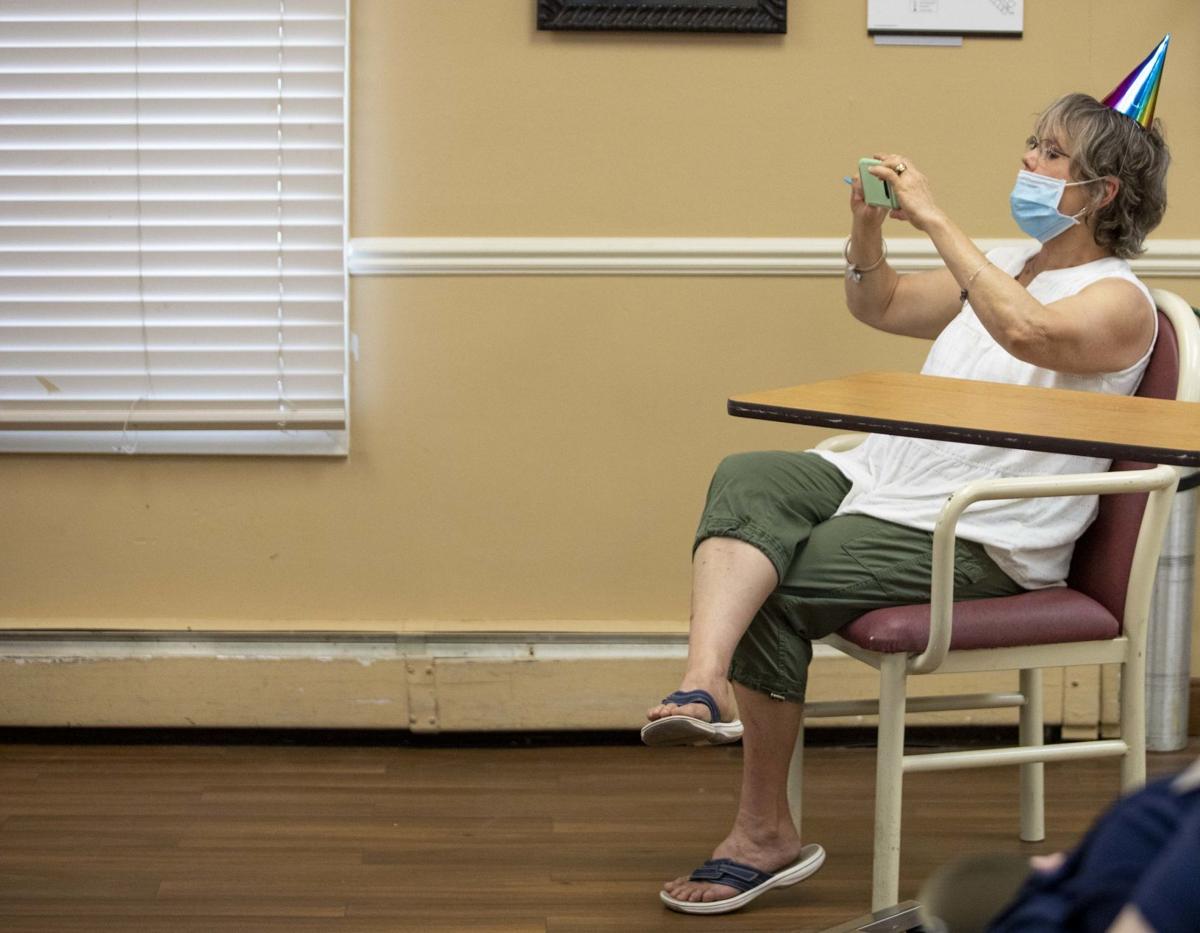 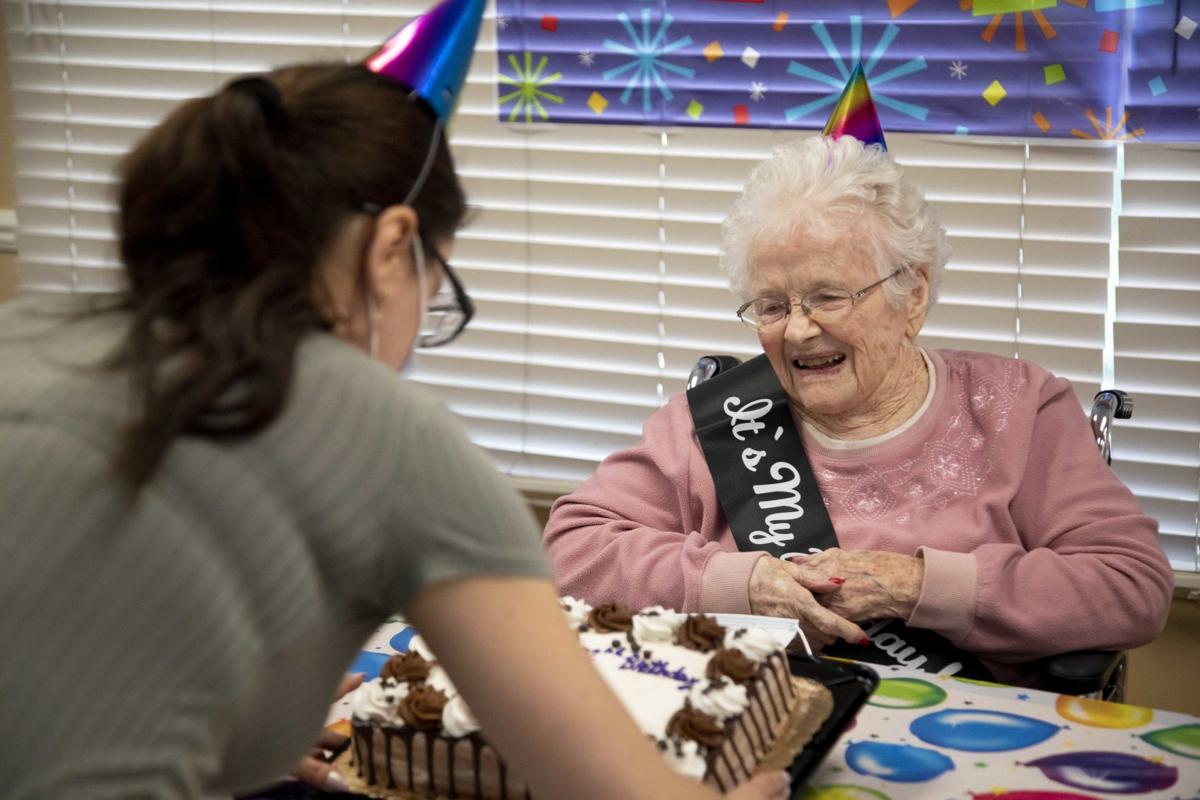 A staff member at Avantara Arrowhead removes the covering of Bernetta "Bernie" DeShazo's birthday cake on Wednesday in Rapid City. DeShazo will have her 102nd birthday on June 30. 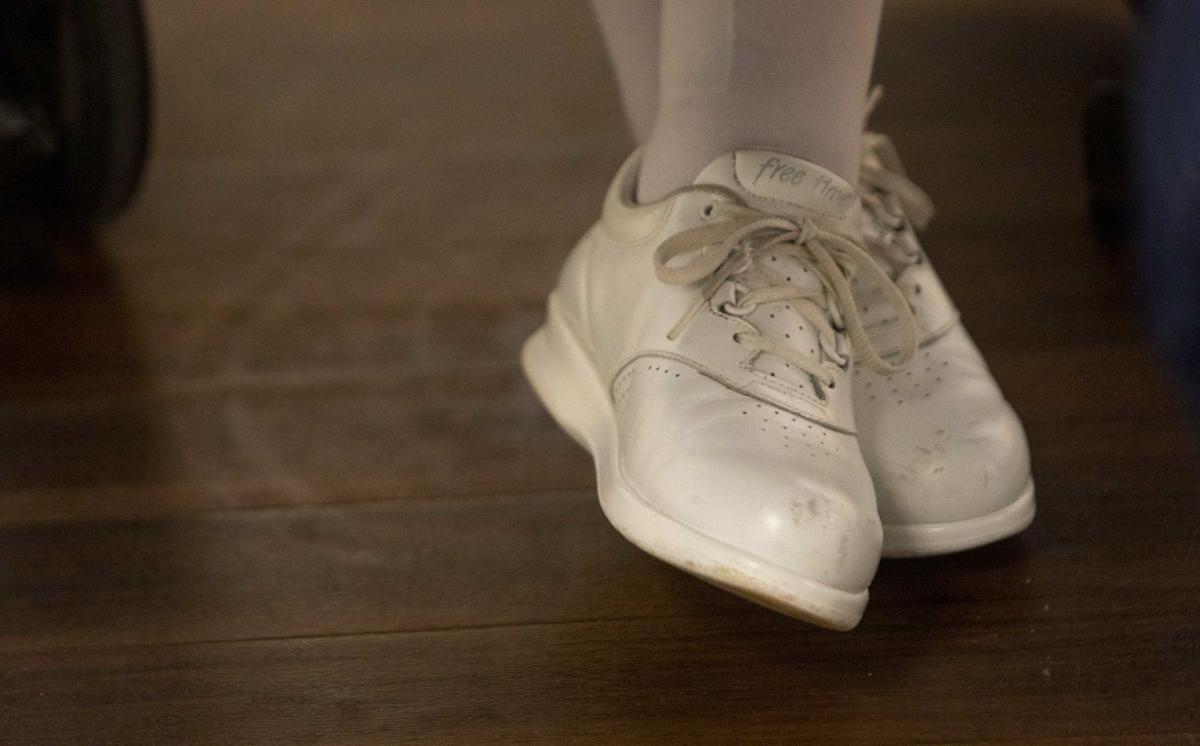 Bernetta "Bernie" DeShazo's shoes rest as she celebrated her 102nd birthday Wednesday in Rapid City. She was born June 30, 1919.

Bernetta “Bernie” DeShazo says she has no idea how she’s lived to be almost 102, but laughter and spunk may be part of her secret.

On Wednesday, wearing a party hat atop her freshly coiffed hair and an “It’s My Birthday” sash, Bernie grinned for photos as she celebrated the start of her birthday month.

Avantara Arrowhead in Rapid City, where DeShazo is a resident, treated her to birthday cake and balloons in honor of DeShazo’s upcoming 102nd birthday.

DeShazo was born on June 30, 1919, on her family’s farm in Boone, Iowa, in the midst of the Spanish Flu pandemic. DeShazo’s arrival took her parents, Ralph and Gladys Kingsbury, by surprise. Her mother hadn’t known she was pregnant with twins until DeShazo was born minutes after her twin brother, Bernard. DeShazo was one of eight children in the family.

Growing up in the roaring 1920s and the Depression, DeShazo had a flair for creativity. She still fondly recalls the “Seven Sewing Sisters” — her friendship with six other girls when she was 8 or 9 years old. The girls earned money and they bought themselves black-and-white fabric.

“We used our mothers’ sewing machines and we had a blouse and pair of shorts (we made) and that was our main clothes. We were so proud of them,” DeShazo said.

She and her friends sang and put on plays in her parents’ house to earn money for the fabric and other expenses.

“We’d sing. My folks had a piano and people would come to my house and we’d play that piano and pound on it. I wondered how my mother could stand it,” DeShazo said.

DeShazo said one of her proudest accomplishments was graduating from high school in 1936.

“It’s a long time ago. We had it in our high school gym and we walked across the stage and we girls wore dresses,” she said.

She tried college for a month or two, and then decided she was better off putting her money in the bank. She married, and her oldest son, Rodney, was born in 1940, followed by her younger son, Doran, in 1942. Ten years later, in 1952, DeShazo gave birth to daughter Dorinda “Dee” whom she affectionately calls “this little tagalong.”

The ingenuity and spunk that helped DeShazo through lean years of her childhood and the Depression proved essential in adulthood, too. In the mid-1950s, her first marriage ended in divorce. DeShazo and her children moved to Kings, Illinois, to be near family. Her son Rodney had Down Syndrome. He never attended school and ultimately DeShazo made the difficult decision to put him in a children’s home. Rodney is now deceased.

DeShazo was a single working mother in an era when most women weren’t, and she was the parent of a child with disabilities at a time when few resources were available.

“I was proud of the fact that I raised two children all by myself,” she said.

DeShazo supported her young family by working for the owner of the local Walgreen’s. At that time, Walgreen’s was a store with a restaurant in it.

“I cleaned glass cases and waited on customers and everything,” she said. “I’d be worn out when I got home.”

DeShazo later became the postmistress of Kings, Illinois, a position she held for 35 years.

“When she retired, they closed the post office and rerouted the mail to a bigger town,” said DeShazo’s daughter, Dee Hays.

DeShazo also loved to entertain and she liked to cook, especially roasts, steaks, liver, and vegetables from her garden. Hays recalls that her mother often invited friends to dinner.

“She always had people in. She always took care of the neighborhood. She was loving,” Hays said.

“I had a real pretty dining room table and chairs. Sometimes people knew I was short on chairs so they’d bring their own chairs!” DeShazo recalled. “That’s in the olden days when you done the best you could do.”

DeShazo married Harold DeShazo when Hays was about 7. The DeShazos were married for more than 40 years until Harold’s death. DeShazo remembers her husband as a smart man who was fantastic at building things for her. He was proud of his wife’s accomplishments such as crocheting and quilting.

For several years the couple had a huge greenhouse and a business.

“That was a job,” DeShazo recalls. “We grew everything. We grew flowers and vegetables and oh, we had everything.”

After Harold died, DeShazo sold the couple’s home and moved to an apartment, where she lived independently until she was in her mid-90s. In 2015, she relocated to Rapid City to be near her daughter.

Throughout her life, DeShazo said she’s enjoyed people, especially her family and good friends. She loved to walk and bicycle for much of her life, and for many years when she lived in Illinois, she was a member of TOPS (Take Off Pounds Sensibly). The group met in the basement of a local bank.

“Then we’d come out and go to a good restaurant and eat what we shouldn’t have, but we did,” DeShazo chuckled.

Her faith in God has sustained her through life’s ups and downs, including her recent illness and recovery from COVID-19.

“God is good. God is great, and we thank Him for everything,” DeShazo said.

DeShazo is especially proud of her family. In addition to her son and daughter, DeShazo has five grandsons and eight great-grandchildren.

“I love the fact that I got them. Nobody else has them,” DeShazo said, smiling.

Bernetta "Bernie" DeShazo tastes a bit of frosting from her birthday cake on Wednesday at Avantara Arrowhead in Rapid City. DeShazo will celebrate her 102nd birthday on June 30.

A staff member at Avantara Arrowhead removes the covering of Bernetta "Bernie" DeShazo's birthday cake on Wednesday in Rapid City. DeShazo will have her 102nd birthday on June 30.

Bernetta "Bernie" DeShazo's shoes rest as she celebrated her 102nd birthday Wednesday in Rapid City. She was born June 30, 1919.