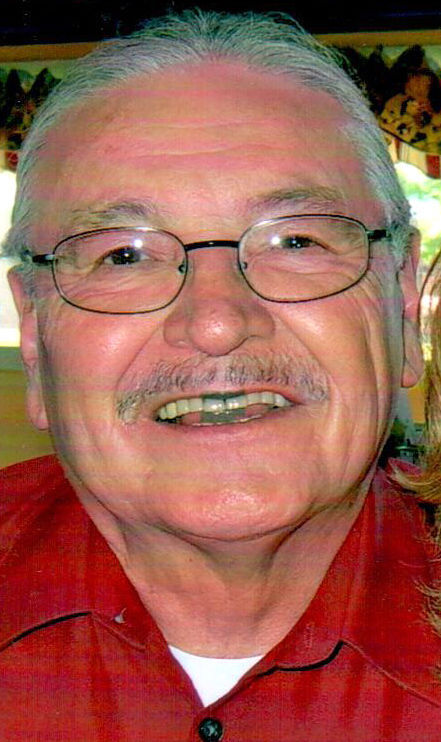 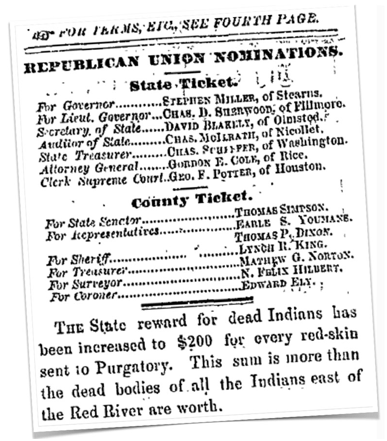 All week I have heard so many idiotic comments by fans of the Washington Redskins that I believe it is time for a short lesson in Native American Culture 101.

Take a close look at an advertisement that ran in a Minnesota newspaper many years ago. Bounties were offered for “red-skins” in the amount of $200. That was a pretty good amount of money to kill a human being and bring their skin (scalp) into the bounty office. Now if the offer was for white scalps (white-skins) wouldn’t any of you find this just a tiny bit offensive?

Now the advertisement for red-skins is real and many Native Americans were slaughtered in order to collect that $200 including women and children. Nearly every Native American knows this to be true, but it is one of those bits of history that seems to have escaped the “let’s keep our history great” generation of white people. How could any government pay a bounty on the lives of other human beings?

There are other reasons why naming a football team after the color of a people’s skin are offensive to Native Americans and should be offensive to all races. There are a group of Redskin fans that call themselves the hogs. They usually put on pig snouts and cheer from the bleachers. But not always. They also found it quite funny to take a pig, paint it red, put feathers on its head and parade it around the 50-yard line. Imagine if you will how African Americans would respond if they took that same pig, painted it black, put an Afro-wig on it and paraded around the football field. The outcry would be harsh and immediate from the Black community. Then why can’t the redskin football fans see this obvious racial insult?

But it’s not just the Redskin fans that are so obnoxious. The fans of the Atlanta Braves and Kansas City Chiefs are just as offensive. Their fans have no clue that applying paint to the face of an American Indian is always done in a religious ceremony and eagle feathers are given to individuals, usually in a religious ceremony, for the great deeds they have accomplished. Native Americans earn the feathers they wear in their hair. How would American Catholics react if the New Orleans Saints used the Pope as a mascot and paraded people dressed as nuns and priests around the football field?

If the Atlanta Braves were named the Harlem Braves would their fans feel free to paint their faces black? Instead of their hideous tomahawk chop would they resort to waving spears in the air?

The national mainstream media doesn’t have a clue either. With the Redskin management in the process of changing their name MSNBC and CNN had a great opportunity to educate the rest of America by inviting one or two knowledgeable Native Americans on their shows to explain the things I am explaining here. Instead talking heads like MSNBC’s Chris Hayes had an African American football player on this show who once portrayed an Indian in a movie. Duh?

Some of our local sports editors like Vic Quick and Station Manager like Jack Caudill of KEVN get it. Quick stopped using the name Redskin a year ago. One of South Dakota’s great sports announcers Bob Laskowski dropped it years ago after taking the time to have lunch with me an actually listen and learn. Bob is no longer with us, but I will always remember him as a good man who saw a wrong and tried to correct it.

We protested for 40 years but it took the fear of losing money by the Redskin management to finally see the light. Native Americans didn’t have the numbers or the political clout to make a change and we were surprised that African Americans never got behind our cause even after three of us were on the Oprah Winfrey Show in 1991 to talk about the name “redskin.” It’s on YouTube if you ever want to see it.

The change is here and it came on my 86th birthday and a finer present I could never have expected. Two of my fellow protestors Michael Haney and Vernon Bellecourt have passed away and I am really sorry they are not here to celebrate this victory with me. But Charlene Teters and Susanne Harjo are still here and they fought the good fight alongside of us. Hopefully this change and awakening will lead to better things for people of all races. But never forget that Native Americans are human beings and not mascots for American sports fans.

(Contact Tim Giago at najournalist1@gmail.com. Giago has been a newspaper publisher for 40 years and was the founder of the Native American Journalists Association)

Richard Kyte: It's time to start talking to one another

Why are Americans so polarized right now? I’m not sure what the answer is, and I’m not sure it matters that much. What defines us is not so much our reasons as our attitudes.

This week I joined the Zoom generation. I’m kind of excited about it, too.

The Ethical Life podcast: Why we should care about ethics

Topics discussed include confirmation bias, the role social media plays in how we consume information and the important questions we need to ask each other to hopefully get at the truth.

Rural hospitals are under siege from COVID-19 – here's what doctors are facing, in their own words

CBD sales soaring, but evidence still slim that the cannabis derivative makes a difference for anxiety or pain