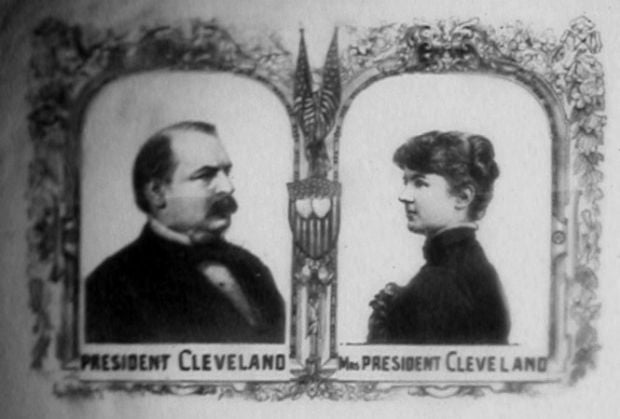 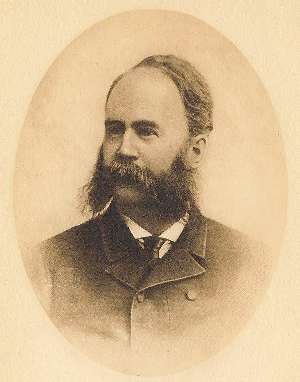 Dr. Joseph Ward was statehood advocate and the founder of Yankton College

Grover Cleveland of New York and Benjamin Harrison of Indiana served as presidents of the United States during the last years of territorial status and first years of statehood for South Dakota.

After initially opposing statehood, the lame duck President Cleveland signed the Omnibus Enabling Act on Feb. 22, 1889, that established the process for southern and northern Dakotans to achieve statehood. He and other outgoing Democrats got on the statehood bandwagon after pro-statehood Republicans beat them in the previous election.

At 3:40 p.m. EST on Nov. 2, 1889, President Benjamin Harrison signed almost identical statehood proclamations that created North Dakota and South Dakota. No one will ever know which state was the 39th or the 40th to enter the Union because Harrison covered and shuffled the documents before and after signing them. He proudly declared, “They were born together – they are one and I will make them twins.”

Presidents Cleveland and Harrison were both lawyers and both Presbyterians, but had little else in common.

After serving an apprenticeship as a clerk in a Buffalo, New York, law firm, Cleveland was admitted to the bar in 1859 and was a legal draft dodger during the Civil War. While two brothers fought, he stayed home to support his mother and sister. He paid $150 to a substitute who served in his place, a proper action under the Conscription Act of 1863.

In 1870, as the sheriff of Erie County, Cleveland twice served as the hangman in executing convicted murderers. As the Mayor of Buffalo in 1881, he won acclaim as an enemy of corruption and was elected governor of New York in 1882. His opposition to Tammany Hall machine politics propelled him into national prominence. He was elected President in 1884, the first Democrat since 1856.

His campaign centered on tariffs and reform of the political spoils system. Many wage earners wanted reductions in tariffs so that foreign products could compete in the American marketplace and reduce the prices of manufactured goods.

A key factor in the 1884 campaign was the defection of some Republicans who were labelled “Mugwumps.” Like Cleveland, they also supported reform and refused to support the Republican nominee, James G. Blaine, because he had been involved in questionable business deals with the railroads.

However, scandal almost sidetracked Cleveland’s campaign for President. Although the paternity of the child was in doubt, Cleveland assumed responsibility and support costs for a boy born to Maria Halpin of Buffalo, New York.

When the story broke, Cleveland’s managers asked him, “What shall we tell the people?” Cleveland said, “The truth!” He still won. But, for several years, he was sometimes greeted by crowds chanting, “Ma, Ma! Where’s my pa? Gone to the White House. Ha! Ha! Ha!”

During his first term as President, Cleveland delivered on his reform promises by transferring thousands of patronage jobs into the civil service, often rejecting the pleas of his fellow Democrats who hadn’t enjoyed any of the spoils of patronage during the previous 24 years of Republican rule. They felt he reformed too many things. However, the independent Republican “Mugwumps” felt he didn’t go far enough and deserted Cleveland when he ran for re-election in 1888.

Cleveland also vetoed 233 pension bills passed by an overly generous Congress for Civil War veterans. He also nullified fraudulent grants of more than 80 million acres of western public lands and secured passage of the Interstate Commerce Act of 1887 which barred unfair freight rates. However, almost all of his efforts to reduce tariffs were crippled by a Republican-controlled Senate. Big business wanted high tariffs because they eliminated foreign competition and guaranteed large profits.

Cleveland was the only president to be married while he was President. The 49-year-old President married 21-year-old Frances Folsom, his ex-law partner’s daughter. Cleveland had also been Frances’ legal guardian after her father’s death. She was beautiful, poised and intelligent, and the President called her “Frank.” When asked why he hadn’t married before, he would reply, “I was waiting for my wife to grow up.” At their White House wedding ceremony in the Blue Room on June 6, 1886, the President promised to love, honor, comfort and keep, but not “obey.”

Frances was perhaps the first presidential spouse to lend her name to advertising. In one advertisement, she is quoted as saying that she owed her beautiful complexion to “the use of arsenic.”

After Cleveland died in 1908, Frances became the first President’s wife to re-marry when she wed a Princeton University professor. After World War II, the former first lady was given the seat of honor next to President Dwight Eisenhower at a Princeton event. She remarked that she missed Washington very much. Ike, having no idea who she was, replied, “Really, where did you live?”

Even though he was a reformer, President Cleveland let partisan politics determine his position on statehood for Dakota Territory. He preferred a delay in granting statehood so that he could continue appointing Democrats to territorial positions. Democrats feared that Republicans would win most elections if statehood occurred. If Congress forced the issue, Cleveland would support only one state for the Dakota Territory, again to minimize the number of Republicans elected to local and federal offices.

Senator Benjamin Harrison of Indiana, however, was a vocal and energetic supporter of statehood for the Dakotas throughout the 1880s. Harrison was an Indianapolis lawyer who had fought in the Civil War. His losing, but energetic campaign for governor of Indiana in 1876 inspired his supporters and enabled him to win election to the United State Senate in 1880.

He was hand-picked by big business to be the 1888 Republican nominee and they contributed heavily to his campaign. An official biography was written to tell the voters about Harrison. Its creator was General Lou Wallace, the author of the novel “Ben Hur.” Even though he lost the popular vote by 90,000, Harrison won the Electoral College and spoiled Cleveland’s attempt at a second consecutive term. Harrison had campaigned vigorously while Cleveland remained silent in the dignity of his office.

Upon leaving, Frances Cleveland told the White House staff, “Take good care of the place, we’ll be back.” She was right. Four years later, Cleveland beat Harrison and they were back. Cleveland became the only President to serve two non-consecutive terms.

During his four years as president from 1889 to 1893, Benjamin Harrison presided over the admission of more states to the Union than any other President. The six new states were North Dakota, South Dakota, Montana, Washington, Idaho and Wyoming.

Harrison was the only president whose grandfather had been president. William Henry Harrison had been president in 1841. After campaigning on the slogan of “Tippecanoe and Tyler Too,” the elder Harrison delivered his inauguration speech from the east portico of the Capitol. It was a cold and stormy day, but Harrison refused to wear a hat or coat. He caught a cold that developed into pneumonia. He died after being President for only one month.

When Benjamin Harrison moved into the White House in 1889, the First Family consisted of the President and Mrs. Harrison, a son and daughter, their mates and their offspring, Mrs. Harrison’s father and her widowed niece. At the time, the White House had only one bathroom.

Electric lights were first installed in the White House in 1890, but being very conservative and afraid of shocks, the Harrisons made the servants do all the turning on and off of the lights. The Harrisons were also the first First Family to put up a White House Christmas tree. It was in the upstairs Oval Room.

Caroline Harrison was perhaps the most domestic first lady. Upon moving to the White House, her first activity was to give it a thorough cleaning. She started the White House China Collection and also published a cookbook in 1890 entitled, “Statesmen’s Dishes and How to Cook Them.”

Unfortunately for her and her husband, Republican leaders misread Benjamin Harrison’s election as a mandate for high tariffs. The Republican Congress and Republican President raised duties on imports. The populist backlash elected a Democrat House of Representatives in 1890. Harrison was re-nominated in the summer of 1892 at the Republican National Convention in Minneapolis, but Cleveland was the clear winner in November.

When South Dakotans voted in 1892 for the first time in a presidential election, Harrison won with 50 percent of the vote. Remembering Cleveland’s opposition to statehood, they gave him only 13 percent of the vote. A populist candidate, James Baird Weaver, received 37 percent.

Even though Democrats won control of the House, the Senate and the Presidency in 1892, Cleveland’s second term was very difficult. The Panic of 1893 was the greatest economic depression experienced in the nation’s history until that time. Droughts in 1894 also turned farmers against Cleveland. By 1896, the free silver advocates had taken control of the Democrat Party and nominated Williams Jennings Bryan as their presidential candidate. The Democrat National Convention that year even rejected a resolution commending President Cleveland for his years of service.

Other Leaders in Statehood Fight

* Arthur C. Mellette was the last Dakota Territorial Governor and first elected Governor of South Dakota. Mellette spend much of his time and money lobbying for statehood in Washington, D.C., before becoming Governor. When drought plagued his administration, he also spent his own money to raise funds to help people survive. In spite of many difficulties, he left the state solvent at the end of his term in 1893. But, when State Treasurer Taylor embezzled the state’s finances in 1895 and fled to South America, former Gov. Mellette was one of Taylor’s bondsmen. Mellette went beyond what the law required and turned all of his possessions over to the state.

* Alexander McKenzie of northern Dakota Territory was a primary opponent to statehood and division into two states. He was also the primary operative who caused the Territorial Capital to be moved from Yankton to Bismarck in 1883. The division of Dakota into two states six years later was a major defeat for him and he moved to Alaska to search for gold.

* Hugh Campbell was a U.S. attorney for Dakota Territory who wrote the pamphlet, “We Are a State.” He even advocated fighting to create a state form of government without waiting for Congress.

* E.W. Caldwell was a newspaper editor who was the secretary of the 1888 Pro-Division Convention held in Huron. He was highly praised for his ability to forcefully debate his positions without offending those who promoted the opposite opinion.

* Dr. Joseph Ward was statehood advocate and the founder of Yankton College. He is also credited with creating the state motto of “Under God the People Rule.”

Nicole Weiss and David Rhoades’ wedding plans took an abrupt turn on July 31 when Weiss was diagnosed with a brain tumor.

After a farmer suffered a heart attack, his neighbors stepped up to harvest his crops on N.D. farm

Around 60 farmers in North Dakota put their harvesting on hold to help the farmer and his family, using all their own equipment.

Dr. Joseph Ward was statehood advocate and the founder of Yankton College