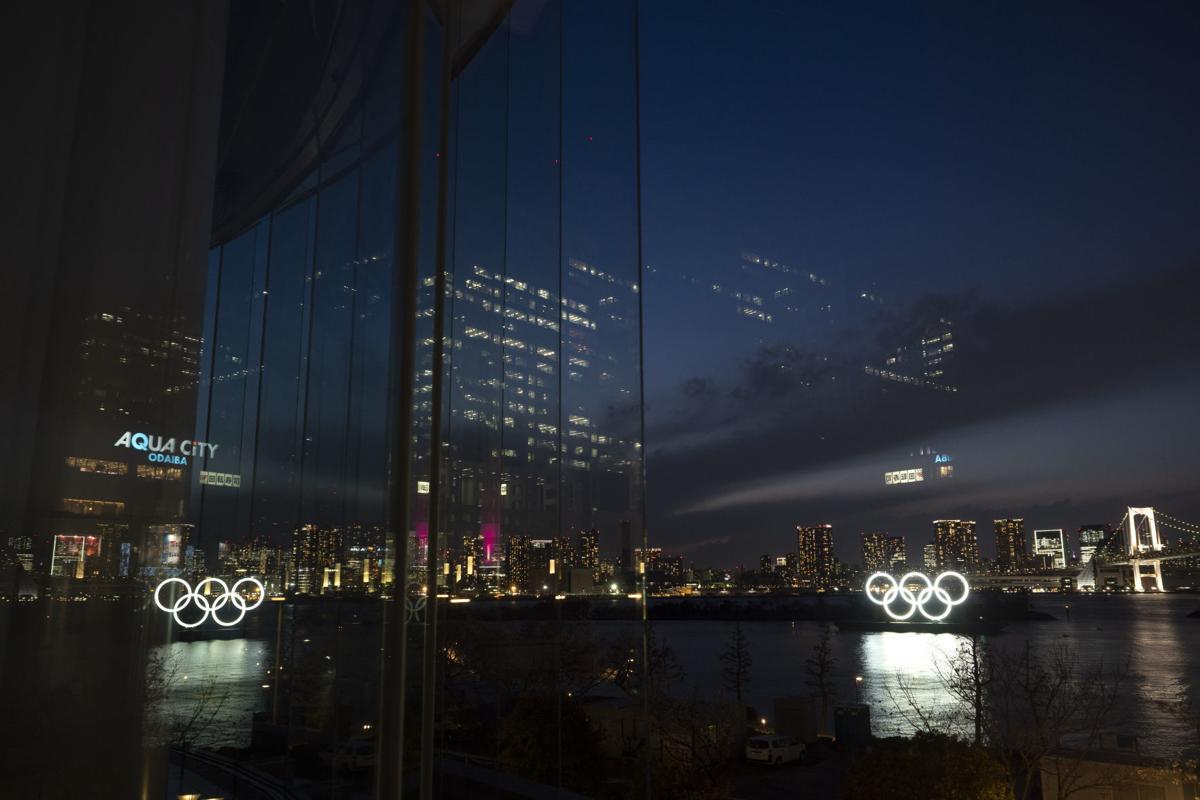 The Olympic rings are reflected in the glass wall of a wedding chapel in the Odaiba section of Tokyo on Monday. The Tokyo Olympics are going to happen — but almost surely in 2021 rather than in four months as planned. 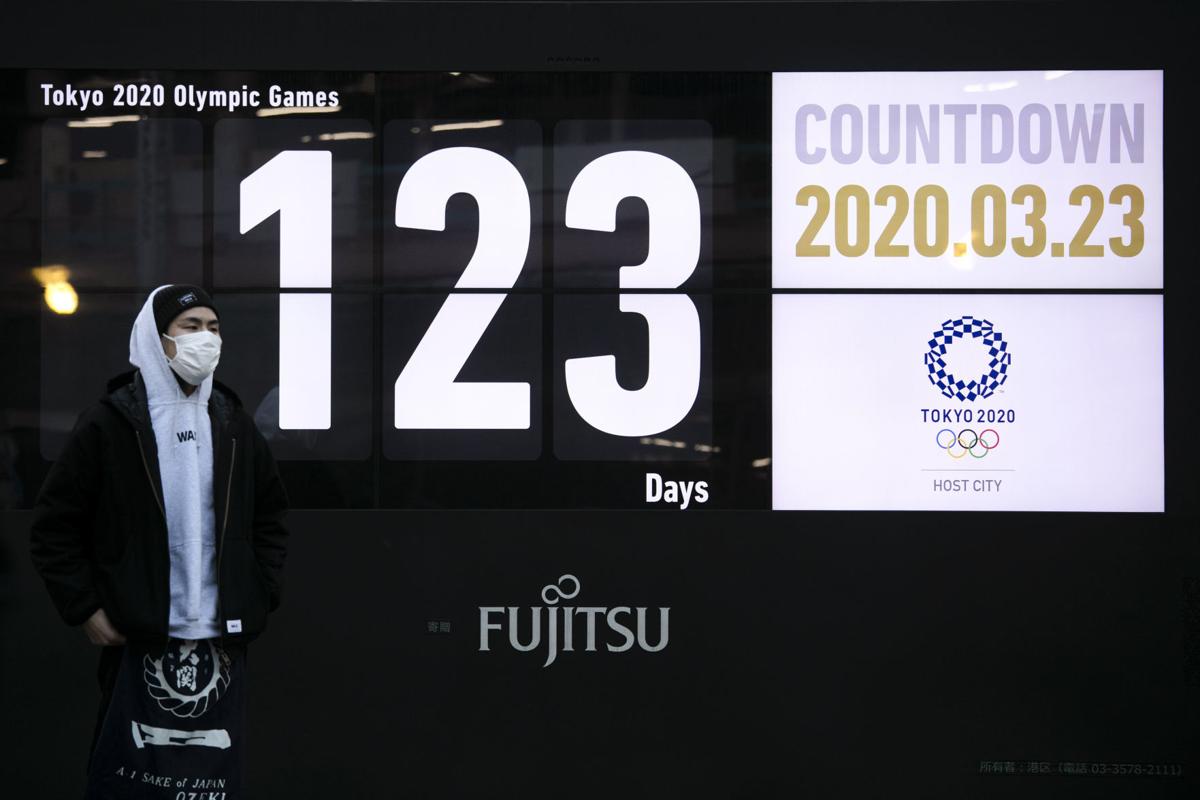 A man stands in front of a countdown display for the Tokyo 2020 Olympics and Paralympics in Tokyo on Monday. Japanese Prime Minister Shinzo Abe acknowledged that a postponement of the crown jewel of the sporting world could be unavoidable.

IOC members, national Olympic committees and athletes were all racing toward the same conclusion Monday: The Tokyo Olympics are not going to take place this summer.

Craig Reedie, a longtime member of the International Olympic Committee, told The Associated Press that everyone can see where things are headed, with the coronavirus pandemic spreading and Olympic hopefuls around the world unable to train.

"In the balance of probabilities, the information known about conditions in Japan and the COVID-19's effect on the rest of world clearly indicates the likelihood of postponement," Reedie said. "The length of postponement is the major challenge for the IOC."

Earlier in the day, IOC member Dick Pound told USA Today that he had reached the same conclusion about the games, which are scheduled to start July 24. A tweet put out by the newspaper read: "The 2020 Summer Olympics Have Been Postponed Over Coronavirus Concerns."

The IOC said no decision had been made, and Reedie was quick to acknowledge that he was speaking only for himself and not because of any insight provided to him by IOC president Thomas Bach, who will guide the final decision. Pound did not return a message left by AP. Earlier in the day, after Pound's pronouncement, an IOC spokesman said, "It is the right of every IOC member to interpret the decision of the IOC (executive board) from Sunday."

Indeed, the interpretations and opinions are just that and haven't always been spot-on. Last month, Pound told AP that cancellation, not postponement, was the only real option if the Tokyo Games couldn't start on time.

But a lot has changed since then, and the rapid momentum of the "postpone" movement among athletes and nations seemed to diminish the likelihood that it will take all of four weeks for the IOC to reach a conclusion. That was the timeline the IOC's executive committee decided on Sunday when it announced it was putting together working groups to study the massive logistical issues involved in postponing the games.

Among those issues include the availability of venues in Japan, the disruption to the international sports calendar during whatever new date is chosen, the resetting of qualifying procedures, and insurance considerations; both the IOC and the Japanese organizing committee hold massive policies, the legalese of which will take time to unwind.

After that IOC announcement, however, both Canada and Australia — whose senior Olympic official is IOC member John Coates, the leader of the Tokyo inspection team — sent word that they would not or could not send teams to Japan for an Olympics that start in July.

"I know this is heartbreaking for so many people — athletes, coaches, staff and fans — but this was absolutely the right call, and everyone should follow their lead," Canadian Prime Minister Justin Trudeau said.

Other key delegations that have pushed for a postponement include World Athletics, the international federation for the centerpiece sport of the Olympics, along with Olympic committees in Brazil, Slovenia and Germany. USA Swimming and USA Track and Field, which combine to form about a third of the U.S. team, also want a new date.

Athletes also grew louder in their request for postponement. A track group called The Athletics Association joined another athlete group, Global Athlete, in pressing the IOC to act.

The track group is led by two-time Olympic champion Christian Taylor of the U.S., who said more than 4,000 track and field athletes responded to a survey, and 87% said their training had been adversely affected by the coronavirus.

Individual athletes continued to speak out as well.

"Although I am upset that the Olympics will not be happening this year, I agree that this is the best decision in order to keep the athletes and spectators healthy and to prevent the virus from spreading further," U.S. gymnast Morgan Hurd said in a tweet, reacting to Pound's comments.

And while saying it's a done deal might be jumping the gun, it feels inevitable the announcement will come.

Everything has come full circle for Rapid City native and St. Thomas More graduate Ciara Duffy, as she was named the inaugural Becky Hammon Mi…

BILLINGS, Mont. — Even during these times when athletics are on hold due to the coronavirus pandemic, Billings Skyview graduate Dennis Newell …

The NCAA Division I Council voted Monday to approve an extra year of eligibility for all spring sport athletes who had their seasons canceled because of COVID-19, but the generosity will come with a caveat for seniors:

It's Charlie Flohr's first year as the South Dakota School of Mines head football coach and ... he's not in Rapid City.

The Olympic rings are reflected in the glass wall of a wedding chapel in the Odaiba section of Tokyo on Monday. The Tokyo Olympics are going to happen — but almost surely in 2021 rather than in four months as planned.

A man stands in front of a countdown display for the Tokyo 2020 Olympics and Paralympics in Tokyo on Monday. Japanese Prime Minister Shinzo Abe acknowledged that a postponement of the crown jewel of the sporting world could be unavoidable.