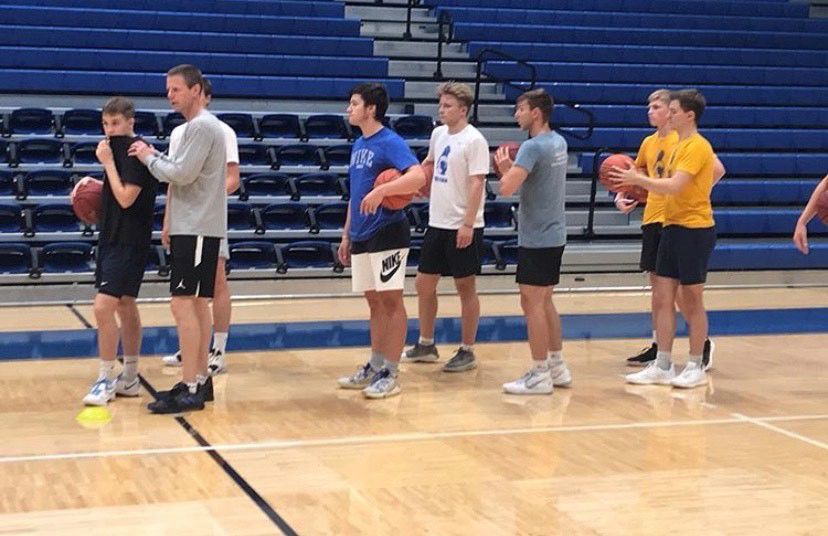 Allan Bertram is pictured with one of his Sacred Hoops Basketball Academy AAU teams. Bertram, who previous coached for 17 years at Andes Central, Todd County and Chamberlain, was named the Rapid City Central girls' head coach on Wednesday. 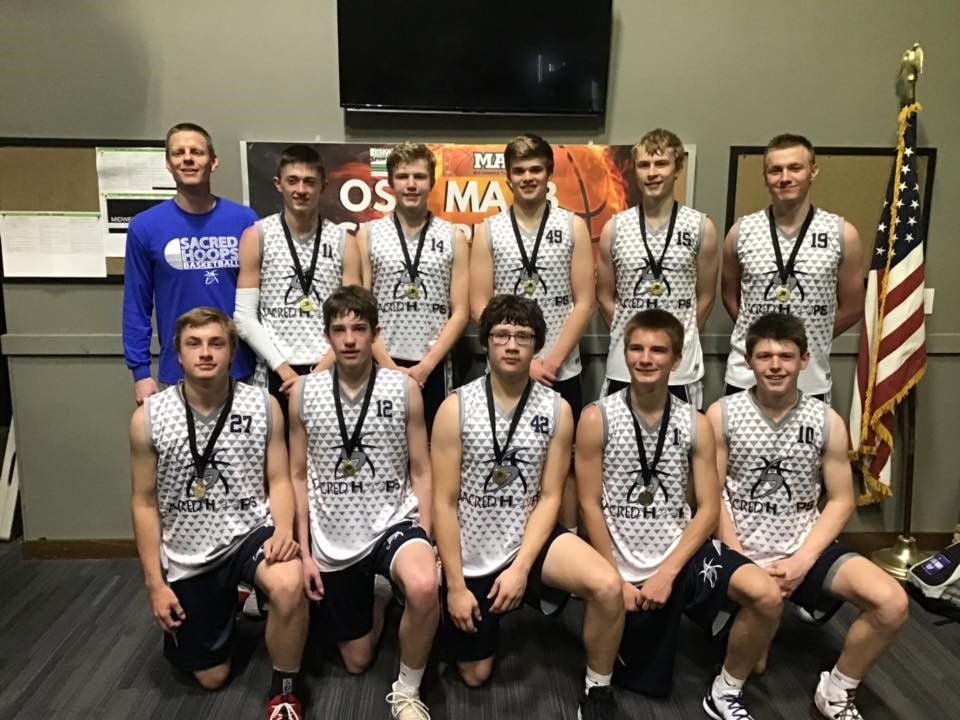 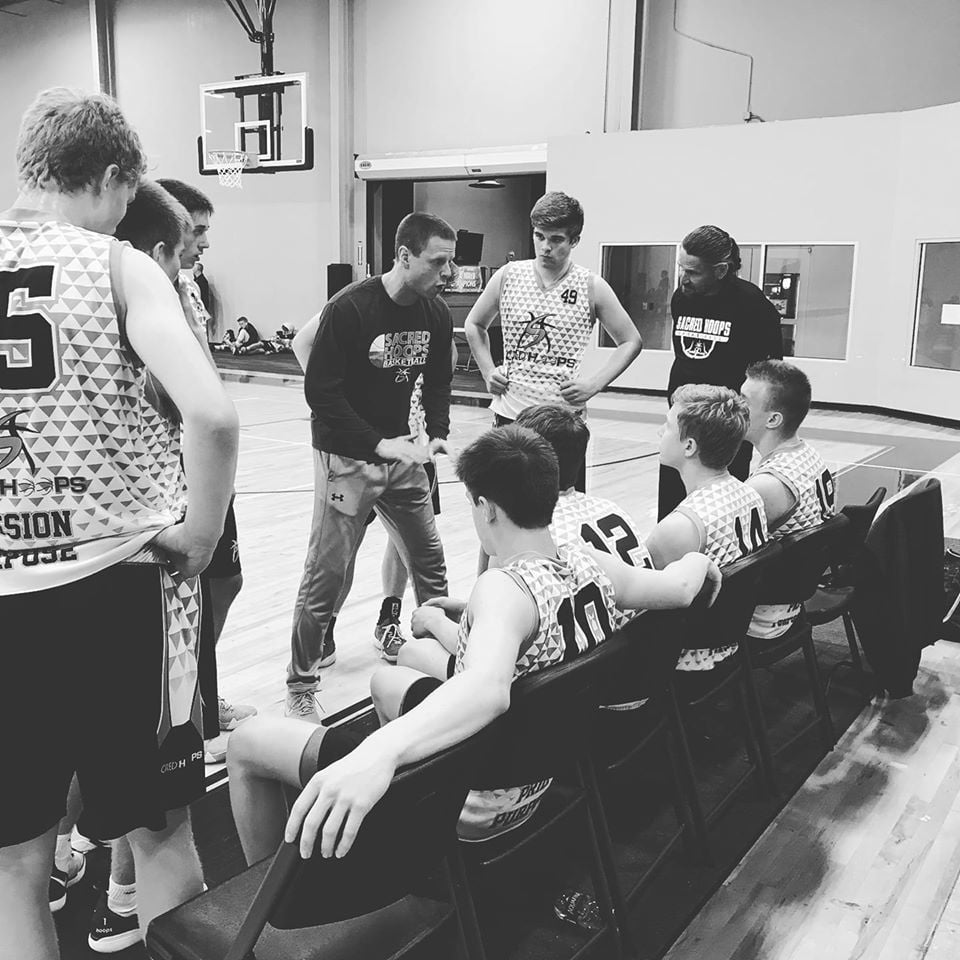 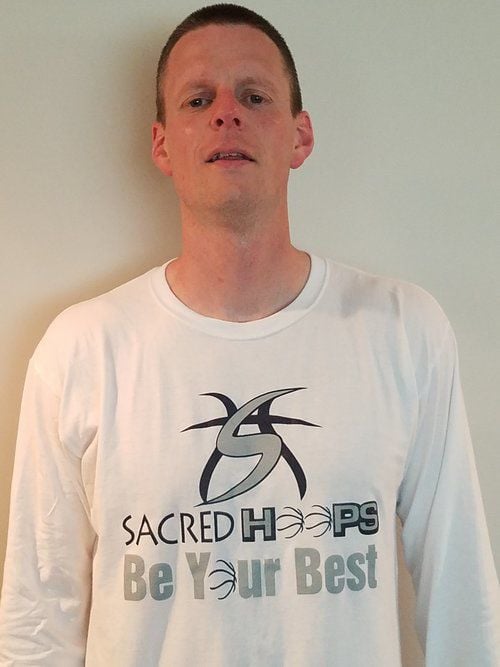 Three years ago Bertram helped start Sacred Hoops Basketball Academy and he will get back on the high school sidelines next season as he was named the new head girls' basketball coach for Rapid City Central on Wednesday.

"Coach Bertram has every intangible any activities director would look for in a head coach. He has a proven track record of success with over 20 years of experience," said Central athletics director Jordan Bauer. "He brings a robust knowledge of the game, tremendous leadership skills, and possesses an unmatched passion to serve as the next leader for the Cobbler girls basketball program. We are extremely excited to work with Allan and welcome him and his family to the community of Rapid City, Rapid City Central, and the Cobbler family."

Bertram replaces longtime Central coach Kraig Blomme, who resigned earlier this month after 20 years at the helm.  The Cobblers finished 8-13 this past season.

A Colome High School graduate, Bertram has been coaching basketball for over 20 years in the state of South Dakota. He was a head coach for 17 years, compiling 225 career wins at Andes Central, Todd County, and the last 12 at Chamberlain. In that time his teams won eight conference championships, seven district titles, four region championships, and made four trips to the State A Basketball Tournament.

Bertram was named SDBBCA Region Coach of the year two times and is the winningest coach in the history of Chamberlain. For the past six years he has been a basketball trainer and basketball academy director. His current basketball program, Sacred Hoops Basketball Academy, has become the largest basketball program in South Dakota with over 600 athletes playing summer basketball in his program and working out over 4,000 athletes each year. Bertram is also the Regional Director for AAU Basketball representing the state of South Dakota.

After taking a step back in 2014 at Chamberlain after his son Skyler, an all-state performer, graduated, Bertram said he knew he would eventually get back on the high school sidelines. For that time being, though, he wanted to watch his two girls — Kylie and Ashton — compete.

“I made a promise to myself and to them that I wasn’t going to miss their games. As a longtime coach, I missed a ton of everything,” he said. “I took a break, although obviously coaching AAU and being a director, you are coaching all of the dang time, so it wasn’t like I wasn’t coaching, but not on the high school sideline, for sure.”

In AAU, Bertram said the four months that aren't busy are when everybody is playing in the winter, so he was able to see his girls compete. He’ll still run Sacred Hoops, but in the winter time he said he doesn’t have as much to do.

The Central job was a perfect chance to get back in the high school realm of coaching, although he said he was going to be picky with the school that he chose to come back with.

“When we were coaching in Chamberlain, we had a lot of success, and I didn’t want to jump into any program,” he said. “I wanted to get into a program that was going to be a challenge, and have that challenge to build something that people don’t think can be done. I think Central is a prime location; it's a school with good athletes. They have struggled a little bit lately, and I think they are hungry to get back to being successful. I have no doubt we can turn it into a Class AA power.”

Bertram said his first goal at Central is to create some excitement in the program. He said young players are willing to work hard when they feel excited about something. First and foremost, he said he wants to make it a special place to play.

“Central is engulfed in tons of great traditions throughout the years,” he said. “It's just bringing back the enthusiasm and the excitement to play and put on a Cobbler uniform. Basketball is a skill game, and the more time you put into it, the better you are going to be.

"I want to re-establish a solid work ethic for our program, from the seniors down to the freshmen, and just getting kids into the gym and getting better, and wanting to do that. When you can build excitement and get them to work hard, you’re going to have a very successful program.”

Bertram said the game of basketball is meant to be played with pressure, so he wants the Cobblers to be a team that is going to try to put pressure on its opponents, both defensively and offensively.

Bauer added that Bertram is going to be a "fantastic addition" to Rapid City Central.

"He is an achiever that is not afraid to put in the hours it takes to be competitive at the AA level," Bauer said. "He sets high expectations and holds himself, his athletes, and his coaches accountable. Most importantly, he knows how to build relationships through hard work and dedication to the program and his student athletes. He is a genuine, confident, positive, extremely hard worker that will fit in great with the culture we are working to build in Cobbler athletics. I’m beyond excited for Coach Bertram to get to Rapid City to begin re-building our Cobbler girls' basketball program.”

To say it’s been a crazy year in rodeo is an understatement. Multiple rodeos, big and small, have been canceled because of Covid-19. Each week…

The NFL plans to play the Black national anthem before Week 1 games. Hear the anthem here.

Additionally, the league is working collaboratively with players to recognize victims of systemic racism throughout the season.

Cruising along after a couple of games in the 25th annual Mt. Rushmore Classic, the Rapid City Crush 18U girls' fastpitch softball team sudden…

It was a much-needed and surprise return for outfielder Blake Weaver to the Rapid City Post 22 lineup.

Rosencranz coming around for Bismarck

During the abbreviated college baseball season, Jaxon Rosencranz popped a home run in half the games he played for Augustana.

The Ivy League on Wednesday became the first Division I conference to suspend all fall sports, including football, leaving open the possibility of moving some seasons to the spring if the coronavirus pandemic is better controlled by then.

Allan Bertram is pictured with one of his Sacred Hoops Basketball Academy AAU teams. Bertram, who previous coached for 17 years at Andes Central, Todd County and Chamberlain, was named the Rapid City Central girls' head coach on Wednesday.