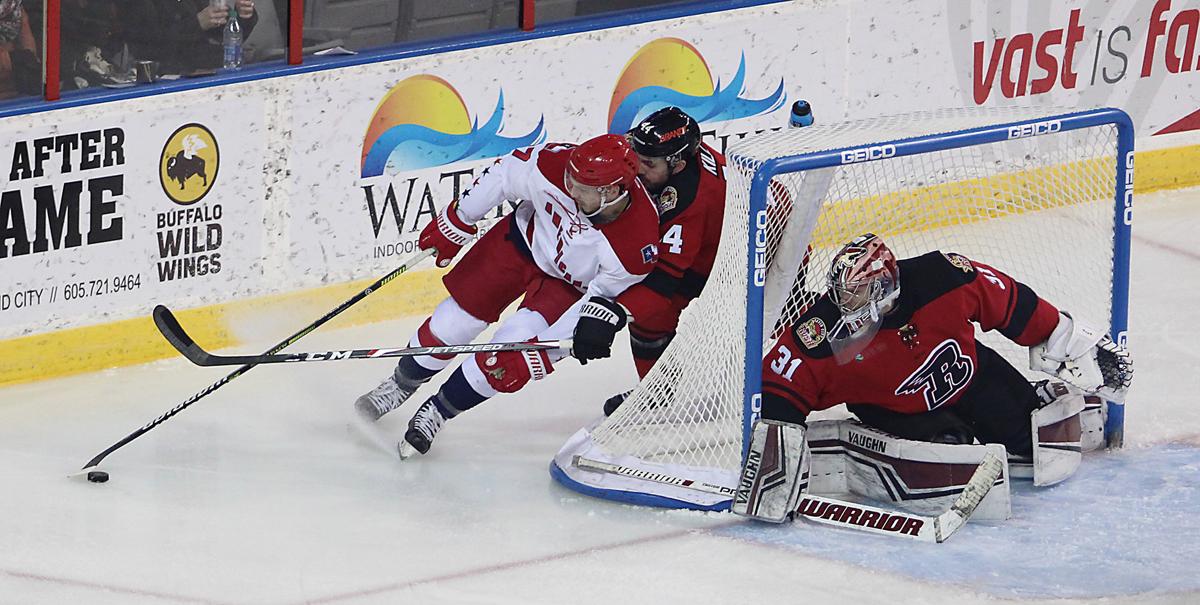 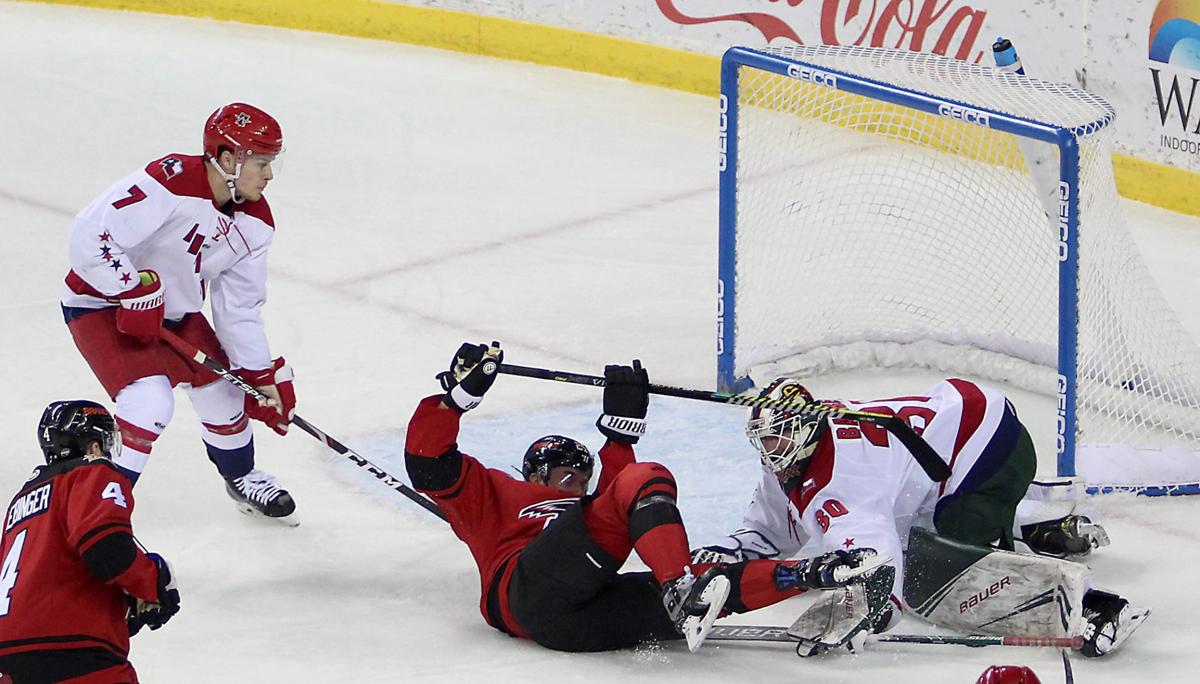 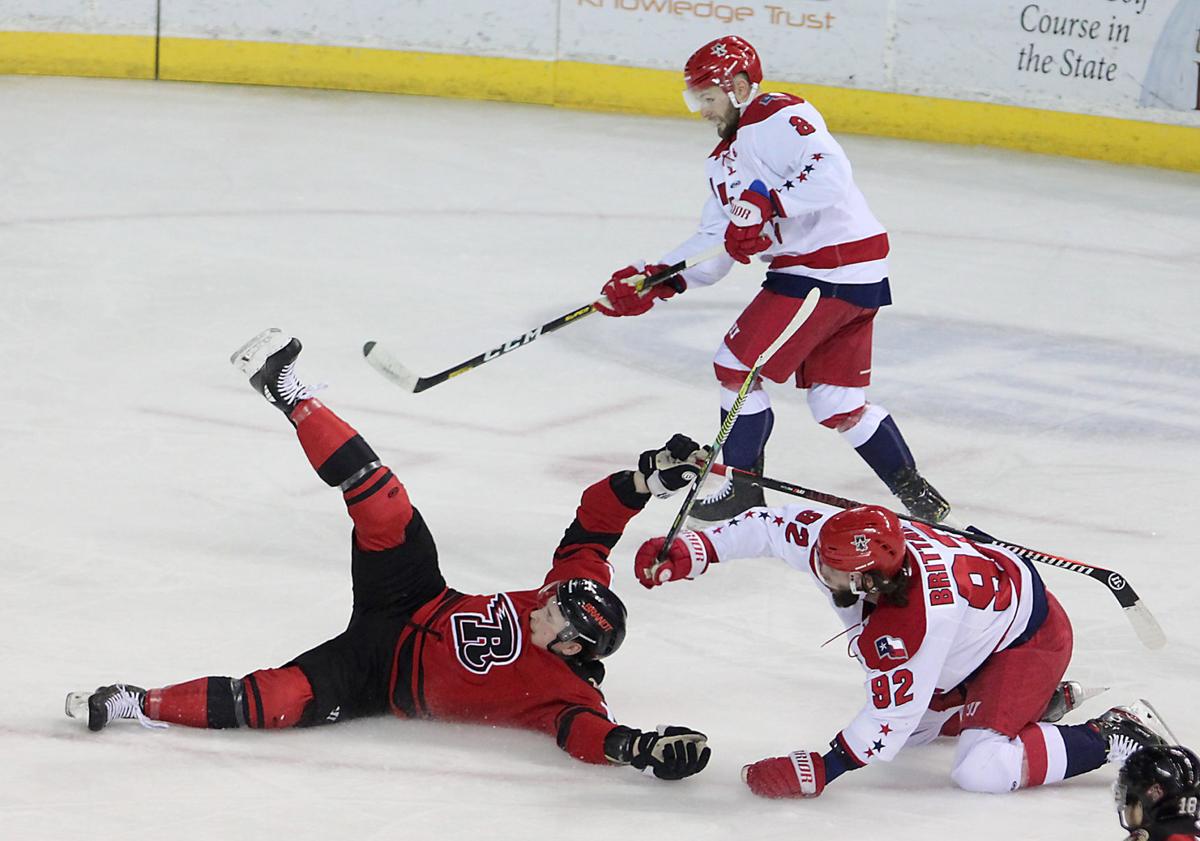 Rapid City Rush forward Tyler Coulter gets back on defense but he is taken down trying to win the puck Friday night against Allen at the Rushmore Plaza Civic Center.

Are the law of averages catching up after a Rapid City Wednesday night victory over the ECHL’s leading team, a night when all of the bounces might have been deemed to go one way?

Contributing factors perhaps, but the more likely cause is that Rush simply fell victim to an excellent performance by a very good hockey team on Friday night as the Allen Americans defeated the Rush 4-0 at the Rushmore Plaza Ice Arena.

Early Rush play for back-to-back wins appeared promising off a couple of solid early shifts. However, following a failed power play opportunity by Rapid City, persistent Allen pressure took control — a 16-4 shot advantage in the first period — as the Americans lit up the scoreboard midway through the period scoring twice on carbon copy tallies a mere one minute and eight seconds apart.

On each occasion, a failure to clear the zone set up the Allen scoring opportunities, and the Americans converted backdoor chances. Jordan Topping tallied the first (13:56), his 21st of the season, and Jared VanWormer (20th) the second (15:04), propelling Allen to a 2-0 lead after the first period.

“I warned our team tonight that they would come out hard,” Rush coach Danny Tetrault said. “They aren’t the number on team in the league for no reason. And they have a veteran team, and they came out hard in the first. I thought we had scored on the power play, the puck hit the post and didn’t go in, and then they score a couple of quick ones, and it’s hard to come back against a team like that.”

The two goal, first period deficit looked all the more foreboding given that Allen sported an 18-2-2-0 record when leading after one frame while the Rush were 1-10-1-0 when trailing.

The slim odds quickly grew scantier in the second period with Allen added two more goals. The first — 18 seconds into the period — resulted when the puck bounced off the end glass and ended up in the crease and was tapped in by Allen’s leading scorer Tyler Sheehy (25th goal).

The American’ second goal of the period came when Alex Guptill tallied his 21st goal of the season off an Allen 3-on-1 odd-man rush three. The fourth Allen goal of the night sent Rush goalie Merrick Madsen to the bench replaced by Gordon Defiel.

Although the Rush actually outshot the Americans in the period (17-9) and had a couple of power play chances in the period — the man-advantage unit continued to struggle (2/33 in the series) — Rapid City was unable to light the lamp as Allen remained up 4-0 through two periods.

“They are a dangerous team and they capitalized when they had chances,” Tetrault said. “They are one of the top scoring teams in the league (second, 4.10 g/pg) and they showed it tonight. But we didn’t quite even after they made it 4-0. We had 17 shots of our own in the second and just couldn’t find the back of the net.”

The final period was scoreless with the Rush largely consigned to killing penalties (successfully). And chippy play down the stretch resulting in a couple of late scuffles.

A bright spot for the Rush came in the playoff goalie who coming in to relieve starter Madsen shut down the Allen stopping all 19 shots faced.

“The rubber match is (Saturday),” Tetrault added, “and we have be ready to go right from the get-go because Allen certainly will. We need more guys going, and our leadership group has to step up. They weren’t that great tonight and they have to step up for us.”

Draymond Green may not be playing in the NBA's Disney World bubble, but that hasn't stopped him from being fined during the league's restart. The NBA levied a $50,000 fine on the Warriors forward for comments he made as a TNT analyst Friday, saying Suns guard Devin Booker needs a new home. "It's not good for him. It's not good for his career," Green said. "... They gotta get Book out of ...

A crumbling college football season took a massive hit Tuesday when the Big Ten and Pac-12, two historic and powerful conferences, succumbed to the pandemic and canceled their fall football seasons.

Rapid City Rush forward Tyler Coulter gets back on defense but he is taken down trying to win the puck Friday night against Allen at the Rushmore Plaza Civic Center.