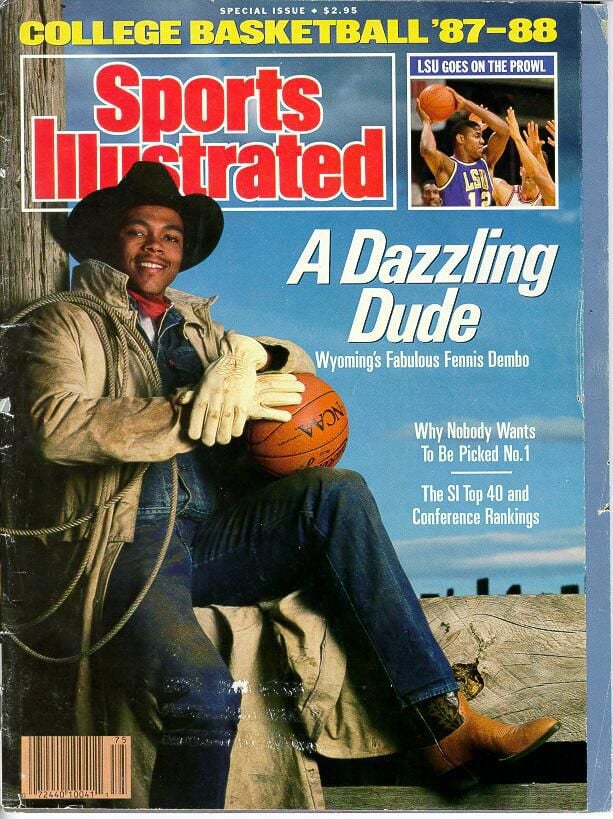 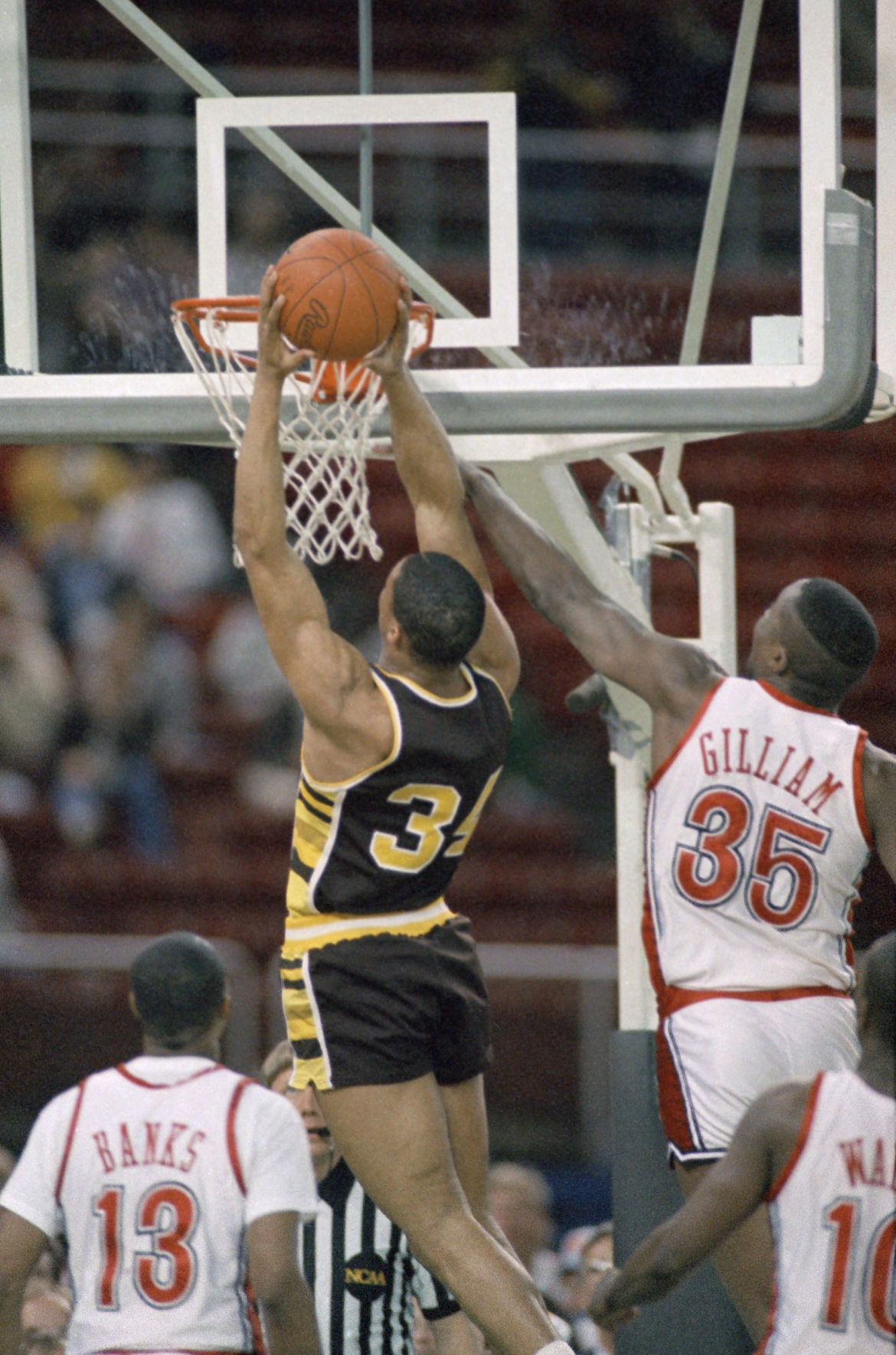 Wyoming's Fennis Dembo (34) goes up for the stuff as UNLV forward Armon Gilliam (35) gets an arm in his way during first half action in their NCAA West Regional game March 21, 1987 in Seattle. Dembo scored and was fouled on the play.

Editor's note: Rapid City Journal sports editor Richard Anderson covered  University of Wyoming athletics with the Laramie Boomerang from 1986-1999 and 2001-2007, and later as a freelancer from 2007-2012.

Few players lit up the scoreboard or fans quite like Fennis Dembo, whether it was on the road at The Pit in Albuquerque, N.M., the Marriott Center in Provo, Utah, or at the friendly confines of the Arena-Auditorium in Laramie, Wyoming.

He was “The Electric Man.”

It all started with his name. No, it is not Dennis Fembo. It's Fennis Dembo.

Dembo wore the name on his chest like Superman's S. For many Wyoming basketball fans — then and now — he was Superman.

He'll have his number 34 retired Saturday at the A-A before during halftime of the University of Wyoming-New Mexico men’s game.

Dembo was a special personality, easily the most unique athlete yours truly has ever covered. In some ways, he was a perfect fit for the state of Wyoming.

Quiet and soft-spoken, but brash on the basketball court, the Texas product had never seen snow before his recruiting trip to Wyoming in 1985. Recruited by then head coach Jim Brandenburg, the Wyoming coaches took him snowmobiling, and reportedly he did a snow angel in the Snowy Range Mountains.

He wanted to be a Cowboy.

Dembo was an instant hit, averaging over 13 points a game as a freshman, and a year later he helped lead the Cowboys to the National Invitation Tournament title game at Madison Square Garden.

If there is one image of Dembo Wyoming fans have ingrained in their minds forever, it's him sitting on the rim after the 1986 NIT team win over Clemson that vaulted the Cowboys to the semifinals, with his No. 1 index fingers shouting out to the 15,000 Cowboy faithful in attendance.

In his junior season, he led the Cowboys to the Sweet 16, upsetting mighty UCLA and Reggie Miller.

Dembo dominated the future NBA star with 41 points, nine rebounds and six assists in the 78-68 win. Wyoming would lose in its next game to UNLV 92-79 in a shootout where Dembo scored 27 points. UNLV would go on to make the NCAA Final Four, falling to Indiana 97-93.

The Cowboys season started with great fanfare, ranked as high as fourth in the nation. It fell short of expectations, under a new head coach, but the Dembo-led Cowboys put on a show nonetheless. In the NCAA Tournament first round, the 'Pokes fell to Loyola Marymount, coached by Paul Westhead and led by Bo Kimble and Hank Gathers, in a wild 119-115 final score.

The program's all-time leading scorer (2,311 points), Dembo was a three-time first team All Western Athletic Conference performer, the WAC Player of the Year (1987), and he was inducted into the University of Wyoming Hall of Fame in 1993.

Dembo not only was a highlight reel in front of the Cowboy faithful throughout the years, but an antagonist for the rest of the then WAC ... especially their fans.

He was a showboat and a hot dog, although he had the ability to back up his cockiness. He was known to wave, wink, pump his fist and smile at the student section after scoring. He likely stuck out his tongue a time or two as well.

Running into the stands for a loose ball at The Pit, Dembo high-five fans on his way back out to the court. Earlier throughout the game they were mercilessly on him, even throwing debris at him when he got into a tussle with a Lobos' player.

There was practically nothing he wouldn't do to egg on the opposing crowd.

Fennis Dembo is Wyoming basketball. Said current UW men's head coach Allen Edwards earlier this week, as the team, as well as the university and the Wyoming/Laramie community prepared for Saturday.

“It is an unbelievable deal. I can be anywhere in the country and they see Steamboat, the first thing they say is Fennis Dembo," said Edwards. "People remember his run and what kind of player he was. He was electrifying. He is a great person and tells great stories, and I’m so happy for him. We want the fans to come out and support Fennis. He has made an impression on his program and the State of Wyoming.”

Some say his college days at Wyoming would prove to be the highlight of his basketball career. They are right. Drafted by the Detroit Pistons in the second round, Dembo never caught on as a professional at the highest level, playing just one season with the Pistons, scoring 36 points in 31 games.

He had an adequate pro career overseas and in the states, retiring in 1998.

Oh yeah, you might remember Fennis Dembo. He played one season for the Rapid City Thrillers in 1992-93, averaging 13.7 points and 7.3 rebounds in 34 games.

Dembo's life away from basketball has been less than glamorous, if not a bit heartbreaking. While at home one night in 2003, with his mother living with him, an intruder broke into his San Antonio home, and fearing for his family's lives, he shot and killed the man.

While justified in defending his family -- no charges were filed -- the psychological aspects of taking a life have haunted Dembo to this day. Counseling has enabled him to cope.

I'll steer you to a story by an excellent young reporter, Cody Tucker, who is owner/operator of a new media outlet in Wyoming, 7220Sports.com. Tucker interviewed Dembo in his home and they talked about his career and his life since he last laced up his basketball shoes. It's a story that any Wyoming or basketball fan ... anyone interested in the triumph and tragedy of life will want to read.

Tucker tells Dembo's story as well as it can be told.

Dembo helped bring the Arena-Auditorium alive on any home game, often to sell-out crowds that other than the 2003 NCAA Tournament season, have not graced Laramie and Wyoming since.

It's doubtful that any other player in Wyoming basketball's future can entertain and play at a high level more than Fennis Dembo.

Nor should there be.

A year ago at mid-season, the Rapid City Rush were hovering at 15-19-2-3 with playoff hopes rapidly trending toward nonexistent.

Wyoming's Fennis Dembo (34) goes up for the stuff as UNLV forward Armon Gilliam (35) gets an arm in his way during first half action in their NCAA West Regional game March 21, 1987 in Seattle. Dembo scored and was fouled on the play.