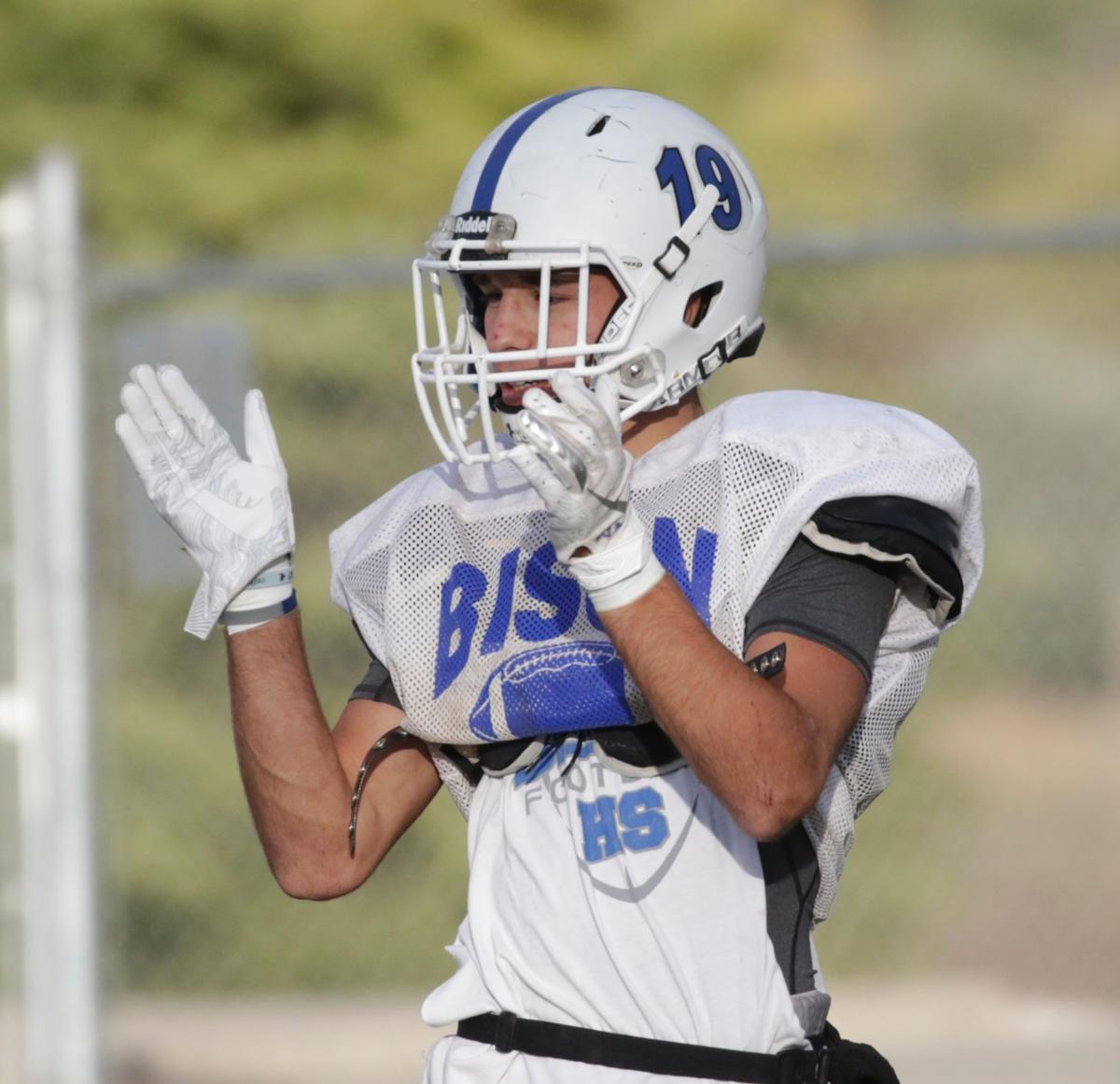 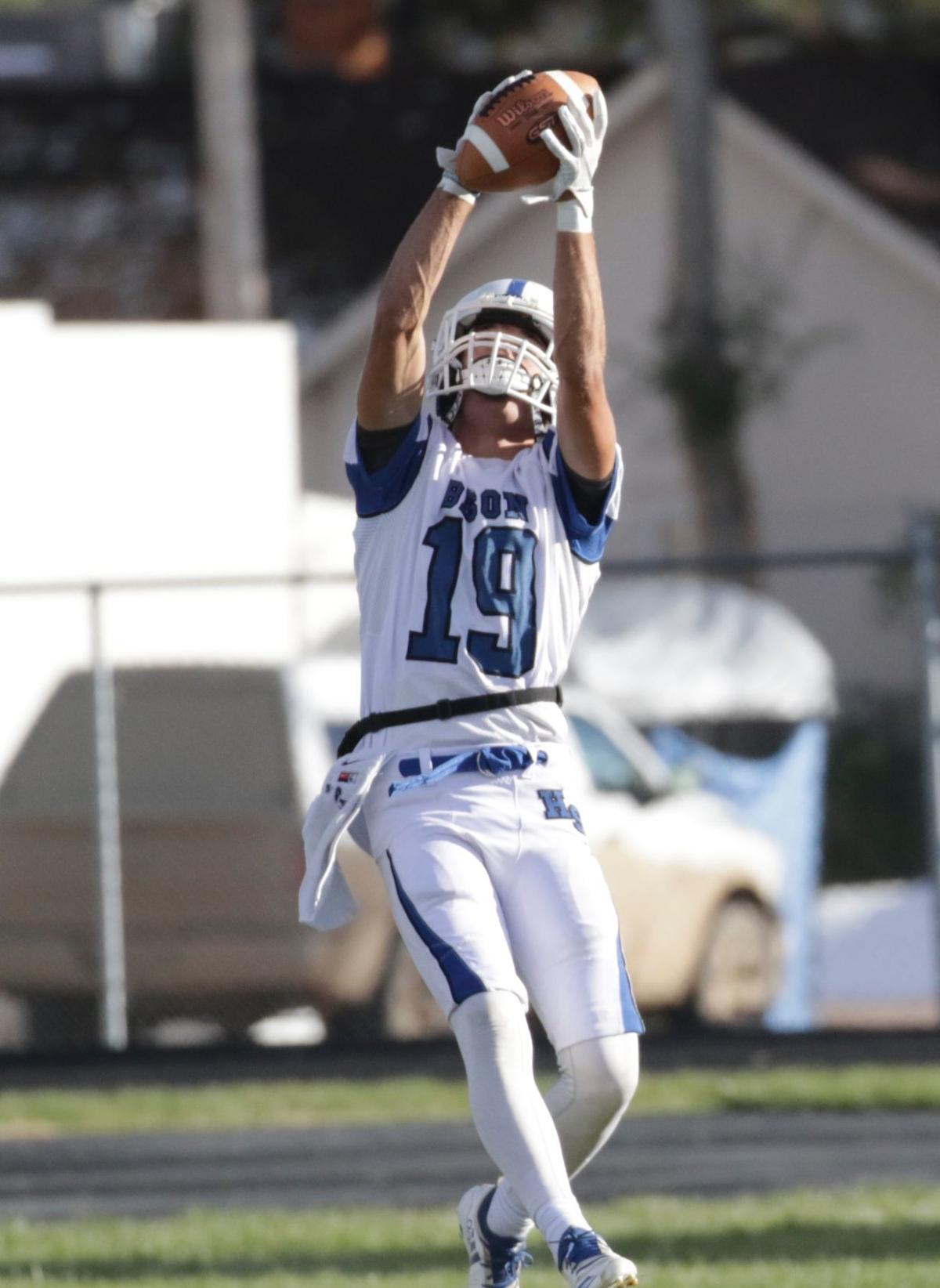 In the Harkless family in Hot Springs, football is introduced early in life.

Current senior quarterback Morgan Harkless can remember playing against his brothers in the back yard every day after school, and not one of the seven brothers was interested in taking it easy on one another.

What also runs in the Harkless family is leading the Bison on the football field.

Morgan, the second youngest of seven brothers and third youngest of eight siblings, scored three touchdowns on offense and had an interception return for a touchdown on defense, went 6-of-14 through the air for 92 yards and had 65 yards on the ground in a 46-0 win over Douglas Friday.

All of the Harkless bothers: Matt, Brady, Justin, Jared and Brice, played for Hot Springs before Morgan and his younger brother, Marcus, put on the Bison uniform. All were star players, all except Marcus played running back and quarterback, and left pretty big shoes to fill.

"I had a lot of pressure, you can say," Morgan said. "We’re super passionate about football. Our work ethic is something that you can’t take away from us, we compete non-stop. Opportunity is something my dad preached to us at an early age, take every opportunity you’re gifted and take control of it."

Hot Springs coach Ben Kramer has coached each of the Harkless brothers as they came and went through the program, and said the family has a trait that translate well to the football field beyond athletic ability.

Morgan's father was a football player and mother ran track. The natural athletic ability is easy to see, but there's something else that has vaulted the Harkless family in the Hot Springs football program.

"They’re just tough, tough kids, tough family," he said. "They’re competitors. They’re constantly pushing beyond what their bodies are telling them to do and I think that’s the biggest part."

That competition is what Morgan believes made him the player he has become. That player started as a 120-pound freshman quarterback called up because the senior quarterback was injured, and has turned into a all-state contender, leading the 6-2 Bison to a No. 4 seed in Class 11A with one regular season game to go.

Experience has also helped. After three and a half seasons of starting under center, he has become a coach on the field for Kramer.

"We’ve been together so long that he thinks like I do. He’ll come off to get a play and he’ll say 'you want to run this, right?’ And I’m like ‘yeah,’" Kramer said with a smile. "It makes my job real easy when I don’t have explain something to him, he already knows what we want to do in that situation."

Even though the Harkless brothers have had years of success on the offensive side of the ball, Morgan has a love for his position on the other side of the ball at defensive back.

After pondering it for a moment, he said he might even prefer to play defense.

Last season a very young Bison team went 2-7, and although it was frustrating year, Hot Spring has bounced back.

Kramer said he thinks all of the players having another year of experience under their belt as been the biggest factor in the turnaround, but Morgan said he thinks it was the time the team put into getting better in the offseason.

"We were in the weight room non-stop. Our numbers aren’t as high as you’d think, but we rely on each other, we trust each other," he said. "We work hard, it’s kind of how we play. We work hard on the field Friday nights and expect to win."

The Bison take on 3-5 Sturgis Thursday at home with kickoff coming at 6 p.m. A win would go a long way to insuring that Hot Springs hosts a playoff game, and Morgan said he already has postseason fever.

"I’m super excited about it," he said. "I think we can compete with anyone in the state."

Sierra Oesterling, Custer girls' cross country: On the girls' side, the Wildcats easily won the girls' title with 15 points led by Oesterling who won the race.

Detroit Lions embrace being underdogs in 2021

What will it take for the Giants to take down the Dodgers?

What will it take for the Giants to take down the Dodgers?

What impacted the line move on the Dodgers?

What impacted the line move on the Dodgers?

With Simone Biles out, Russians win gymnastics gold over US

The Russian Olympic Committee has won the gold medal in women’s gymnastics after U.S. star Simone Biles exited with a medical issue.

Two big components of the Rapid City Post 22 program, on the pitching mound and in the field, are moving on to the junior college level as the…

Simone Biles says she withdrew from final to protect team, self; plus more from Tokyo

Simone Biles says she withdrew from the Olympics gymnastics team final because she wasn't in the right headspace to compete. Here's the latest.

Simone Biles finds peace of mind at Olympics: An analysis, plus more from Tokyo

Maybe gymnast Simone Biles' decision to opt out of the Olympic team and all-around events isn't so stunning after all. Here's an AP analysis, plus more from Tokyo.

Biles was the defending Olympic champion in the vault. Plus, get the latest on the games tonight.

Why Olympians bite their medals and what they do with them

The sight of a jubilant Olympian standing atop the podium after being victorious in their discipline with a gold medal between their teeth is an iconic one. But why?

Get the latest updates and complete coverage from Day 6 of the Tokyo Olympics ... plus an updated medal count, TV schedule and photo highlights.

The win helped the U.S. star make up for what has so far been the worst showing of her Olympic career. Get the latest on the Tokyo Olympics here.

TOKYO (AP) — The greatest gymnast of all time must rally Team USA for the Americans to win their third consecutive gold medal.