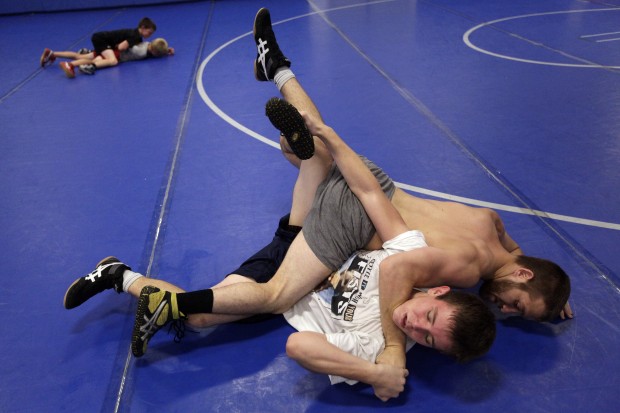 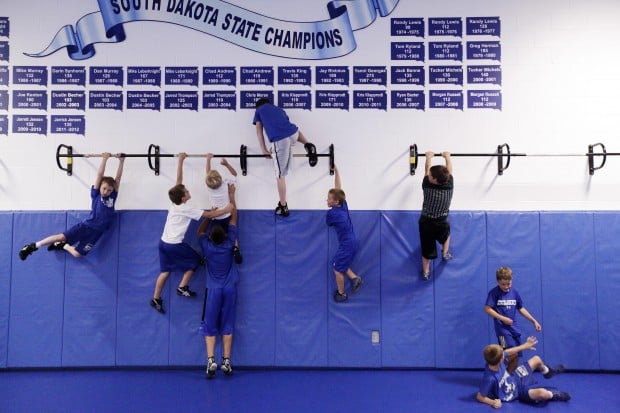 Participants in a youth wrestling camp climb on pull up bars during a break in training. 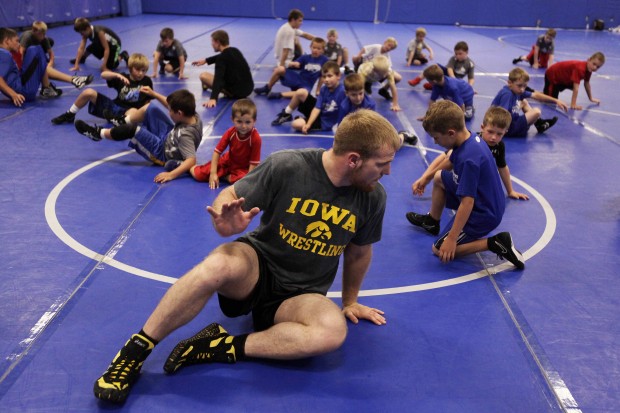 Kris Klapprodt teaches drills to a group of young wrestlers during a wrestling camp at Rapid City Stevens High School. After graduating from Stevens, Klappraodt joined the University of Iowa wrestling team. 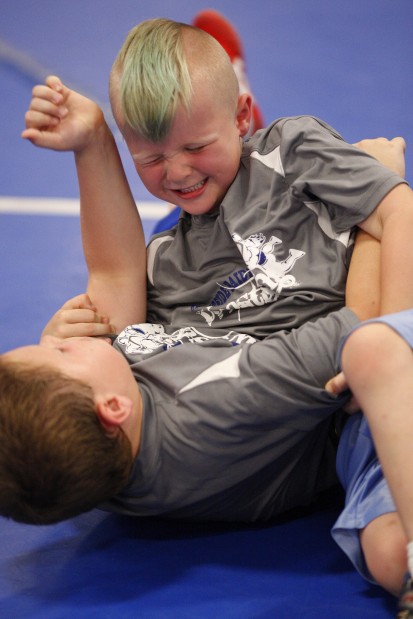 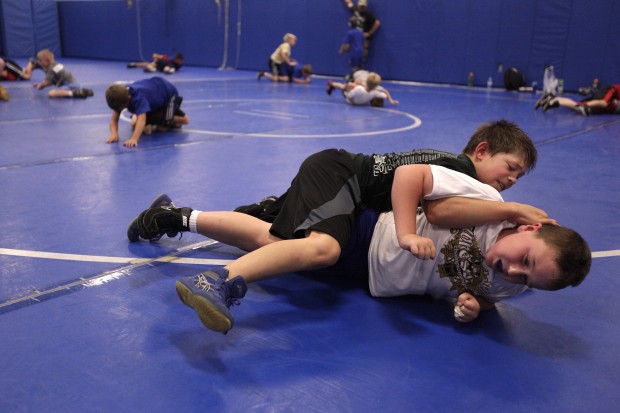 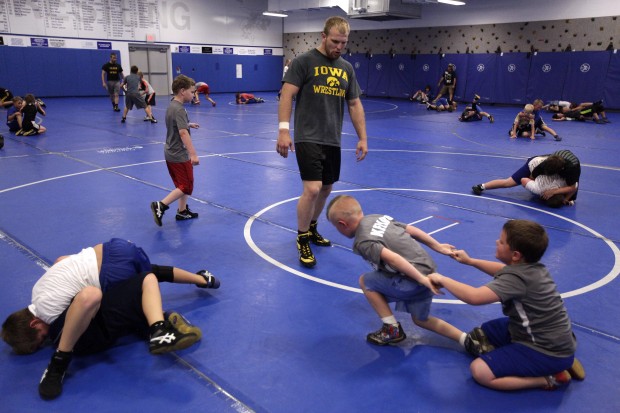 Kris Klapprodt coaches young wrestlers during a wrestling camp at Rapid City Stevens High School. The camp is for wrestlers in elementary school through high school.

Much of what Kris Klapprodt became as a state high school wrestling champion can be traced to the University of Iowa wrestling camps hosted by his alma mater, Rapid City Stevens High School.

So the Raiders’ three-time South Dakota state champion and three-time state runner-up knows very well what exposure to one of the nation’s top college wrestling programs means for a young wrestler.

“It gets kids new moves, a new philosophy of wrestling. It‘s huge for these kids, especially at that young age to be exposed to that,” said Klapprodt, a redshirt sophomore at Iowa who was joined by Hawkeyes coach Tom Brands and a couple of teammates to mentor 60 young wrestlers during a three-day camp this week at Stevens.

“There’s a lot of kids. Everyone seems to be fired up. We’re getting some live wrestling in. it’s been a good deal overall. I’m real excited about it,” he said.

And that’s not the only example of Division I major college wrestling talent in town in the last week.

Last weekend, Rapid City Central hosted University of Northern Iowa national champion Tony Davis for a camp with about 40 young wrestlers, and Saturday was the first of a two-day camp involving more than 50 wrestlers under the tutelage of a trio of University of Minnesota wrestlers, four-time state champion Seth Lange of Sturgis and All-Americans Nick and Chris Dardanes of Chicago.

“Anytime you can get one of the top wrestling programs in the country and have a couple of their kids come into your room, I don’t know who wouldn’t jump at that,” Cobbler coach Lance Pearson said. “They’ve been putting out good wrestlers for a long time and we’re just trying to pick some of that up and utilize that in our room once our season comes around."

“We try to cater to the younger kids and even the older kids, the basics we’re teaching that they need to perfect anyway. It’s good to go over them,” he said. “We do that at Iowa, stand-ups, sit-outs, switches, shots, just fine-tuning the basics."

Dylan Hall, a former Rapid City resident and now a junior-to-be at Liberty High School in Las Vegas, Nev., took in both the Davis camp and Iowa camp while staying with relatives in Rapid City.

“This is a great basic-level camp. Good technique. I went to the Tony Davis camp over at Central. That was a more advanced level,” Hall said.

“His national title that he won and his style of wrestling really fits what the guys are doing today with the scramble situations …Tony’s got good defense, but when he needs to, he can turn it into a scramble and score a lot of points that way, so, yeah, he’s a little more advanced,” Pearson said.

Summer is about as off-season as one can get for wrestlers, but Pearson said keeping kids thinking about the sport can only be a benefit once practices begin in late fall and winter.

“Like any other sport, the more time you can devote to it in-season, out-of-season, post-season or pre-season, it all just moves you along and makes you a better wrestler in a shorter amount of time,” he said.

“We just want to get kids on the mat and help them get better,” he said.

Keeping the younger kids on task can be a challenge, said Hawkeye junior Josh Dziewa, a Pennsylvanian who has been helping out at the Iowa camp at Stevens for the past three years.

“They’re going to want to play games. It’s hard for them to pay attention, but they’re on wrestling mats, they’re in a wrestling room surrounded by wrestlers, and that’s good for them,” he said.

“It gets kids new moves, a new philosophy of wrestling. It‘s huge for these kids, especially at that young age to be exposed to that." Kris Klapprodt, Current Iowa Hawkeye and former Stevens wrestler

Column: Dodgers were finished until epic Game 3 comeback. Now it’s the Braves who are done

The second night of the Badlands Circuit Finals Rodeo took place on Sat., Oct. 9, with winners in each event one step closer to claiming the t…

The South Dakota Mines soccer team lost a heart-breaker 1-0 to the Cougars of Colorado Christian University in Lakewood Sunday afternoon.

Allie Quigley scored 26 points as Chicago won its first WNBA championship with an 80-74 victory over the Phoenix Mercury on Sunday.

Gerrit Cole and Yankees go out with a whimper, lose to Red Sox in AL Wild Card game as season ends

It was his biggest Yankee moment yet and Gerrit Cole came up small.

NAIROBI, Kenya (AP) — The husband of Olympic runner Agnes Tirop has been arrested and will be charged with her murder after Kenyan police laun…

For Ed Orgeron, LSU's Cajun coach, a dream job is coming to an end.

Participants in a youth wrestling camp climb on pull up bars during a break in training.

Kris Klapprodt teaches drills to a group of young wrestlers during a wrestling camp at Rapid City Stevens High School. After graduating from Stevens, Klappraodt joined the University of Iowa wrestling team.

Kris Klapprodt coaches young wrestlers during a wrestling camp at Rapid City Stevens High School. The camp is for wrestlers in elementary school through high school.