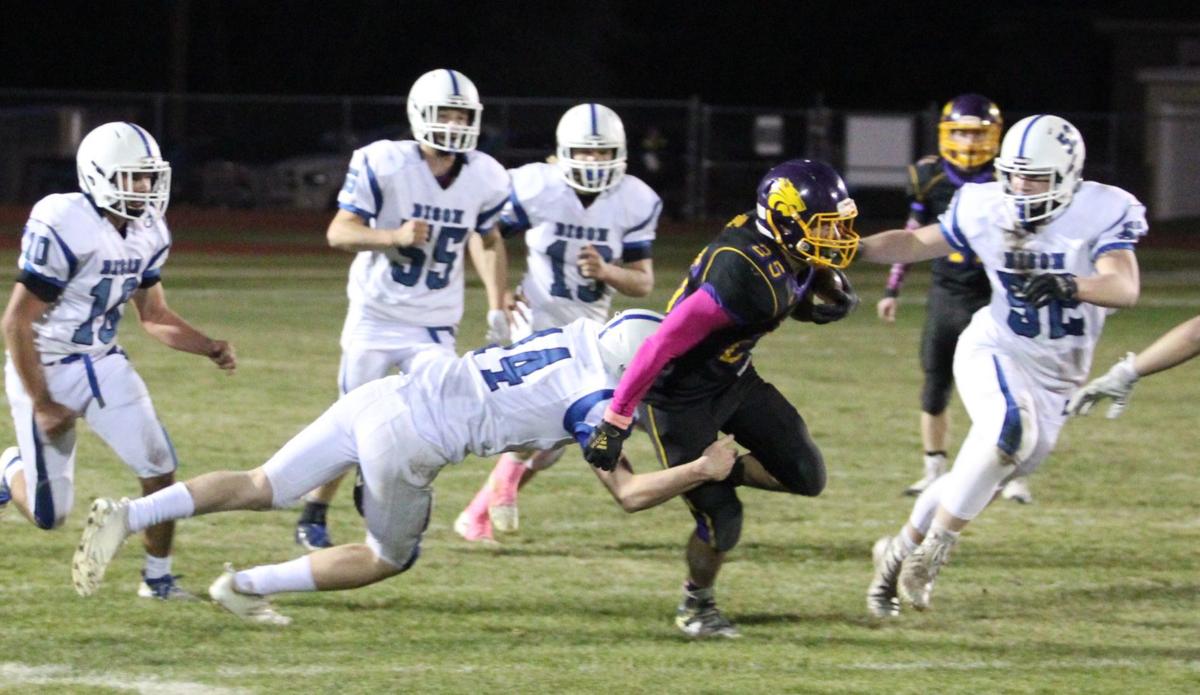 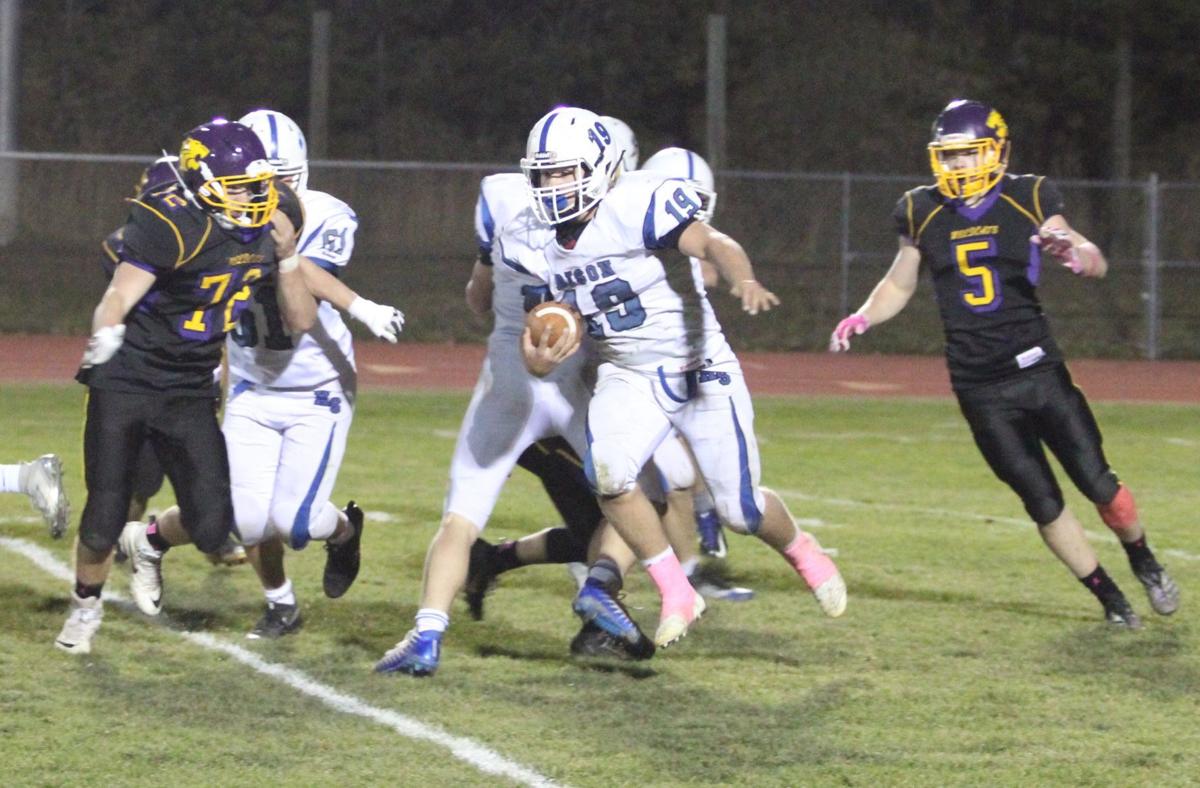 BRIDGEWATER-EMERY/ETHAN 36, HOT SPRINGS 0: The Seahawks shutout Hot Springs in the first round of the Class 11B playoffs Thursday night.

Bridgewater-Ethan/Emery had little trouble from the outset as it carried a 22-0 lead into the half and eventually extended it to 29-0 to start the fourth.

The Seahawks (9-0) hosts Sioux Valley Thursday, while the Bison close out the season at 4-5.

The Winner football team kicked off the 2019 Class 11B playoffs with a huge win as it ran past Lead-Deadwood 60-7 Thursday night in Winner.

The Warriors took a 30-0 lead at the end of the first quarter and added to it with 30 more in the second to put the game out of reach early.

Trevor Peters led the way for Winner with seven carries for 49 yards and two touchdowns, while Brady Fritz finished with four completions for 86 yards and a pair of scores.

For the Golddiggers, Max Johnson finished with three completions for 95 yards and a touchdown.

Jordy Stulken had two receptions for 77 yards and a score.

Winner (9-0) advances to the quarterfinal round to take on St. Thomas More, while Lead-Deadwood’s season ends at 3-6.

HARDING COUNTY 52, DUPREE 0: Harding County jumped out to a 36-0 lead at the end of the first quarter as it cruised to a win over Dupree in the first round of the Class 9B playoffs Thursday night.

Sam Adams paced the Ranchers on the ground, carrying the ball four times for 163 yards and three touchdowns.

Adams finished with touchdown runs of three, 61 and 63 yards in the opening half.

Harding County (8-1) will play Kadoka Area next week in the quarterfinals, while Dupree’s season ends at 3-6.

Kadoka earned a 42-22 victory over Faith in the its opening round matchup.

WALL 28, PHILIP 20: In what was a hard fought affair between Wall and Philip in the first round of the 9A playoffs, the Eagles pulled away and came out victorious Thursday night.

Wall (7-2) will play Canistota/Freeman in the quarterfinals Thursday, while the Scotties closed out the season at 7-2.

LEMMON/MCINTOSH 80, RAPID CITY CHRISTIAN 8: Lemmon/McIntosh had little trouble in its Class 9AA opening round playoff game as it dropped the Comets in Lemmon.

The Cowboys (8-1) will play Hamlin in the quarterfinals, while Rapid City Christian's season ends at 2-7.

SIOUX FALLS LINCOLN 59, RAPID CITY CENTRAL 50: Sioux Falls Lincoln took a 42-14 lead in the first half on its way to closing out the regular season with a win over Rapid City Central Thursday night in Sioux Falls.

The Patriots scored 21 points in the first quarter, but were answered to the start the second when Jeremy Weidmann took a handoff and carried it 71 yards for a touchdown and cut the deficit to 21-7.

Lincoln outscored the Cobblers 21-7 the rest of the way to take a 28-point advantage into the break.

Although the Patriots carried a 49-20 lead into the fourth and sat their starters, Central wouldn’t give up as it scored 30 points in the final 10 minutes to make the game interesting.

Lincoln held off the late comeback bid and secured the win.

Kohl Meisman had a big game to close out the season as he threw for 340 yards and five touchdowns, two of which went to Wyatt Jungclaus and Liam Porter.

Weidmann added to his long touchdown run with a long scoring reception later in the game.

The Cobblers wrapped up the season with a 0-9 record.

Lincoln, 8-1, will play Sioux Falls Washington in the first round of the 11AAA playoffs on Thursday.

BRANDON VALLEY 28, RAPID CITY STEVENS 7: Brandon Valley and Rapid City Stevens wrapped up the regular season Thursday night with the Lynx getting the better of the matchup.

Brandon Valley carried a 21-7 advantage late and put the game away with an insurance score in the fourth.

The Raiders closed out the regular season at 3-6, while the Lynx finished at 7-2.

Rapid City Stevens will have another chance to top Brandon Valley Thursday when the two teams meet in the first round of the 11AAA state playoffs.

STURGIS 47, SPEARFISH 0: The Scoopers closed the season with a pair of wins, including a victory over the Spartans Thursday night in Spearfish.

Sturgis wrapped up the season at 4-5 and hosts Mitchell in the first round of the playoffs, while Spearfish (0-9) travels to Pierre to take on the top seeded Governors.

PIERRE 61, DOUGLAS 0: Pierre closed out its unbeaten season with a win over the Patriots in Box Elder Thursday night.

Pierre (9-0) will play Spearfish Thursday, while Douglas (1-8) travels to Brookings.

CUSTER 70, PINE RIDGE 6: The Wildcats finished out the regular season with a win over Pine Ridge Thursday night.

The Wildcats closed out the season at 6-3, while Pine Ridge finished 0-9.

North Korea, citing the coronavirus, has become the world's first country to drop out of the Tokyo Olympics. Here's a look at what it might mean.

Minor scheduled to start for Royals at White Sox

Westminster shuts out Mines to stay unbeaten in conference plat

South Dakota Mines suffered its third straight shutout in a 2-0 loss to Westminster (UT) Friday night at the Dakota Fields in Rapid City.

Hideki Matsuyama has won the Masters, making history as the first male golfer from Japan to win a major championship.

Royals-White Sox postponed because of rain

CHICAGO (AP) — The Kansas City Royals and Chicago White Sox will have to wait at least another day to resume their series after Saturday's game was postponed because of rain.