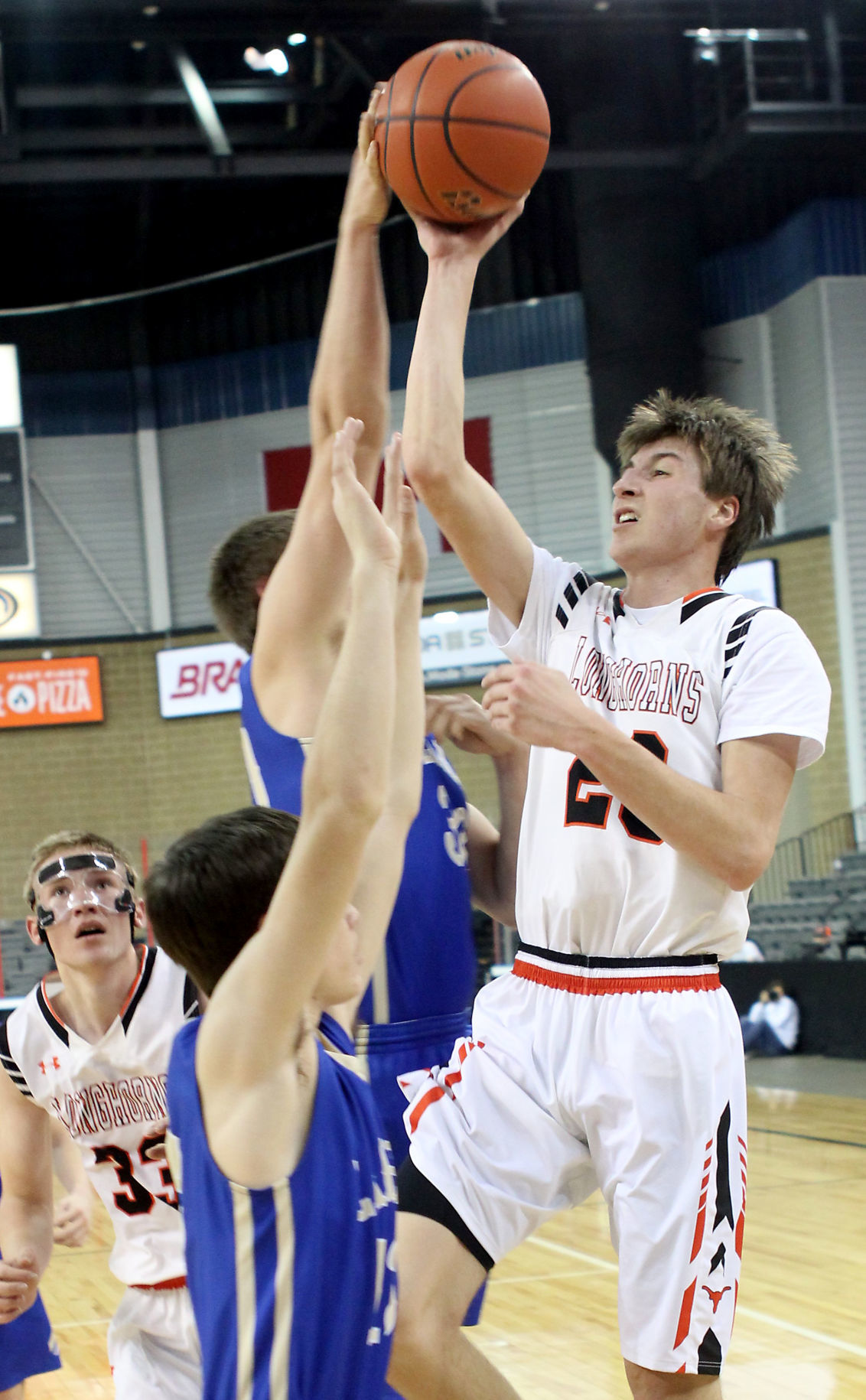 Faith's Tyson Selby is fouled by Wall's Kole Gallino when Gallino tries to block his shot in the lane Saturday night in the West River Invitational title game at the Rushmore Plaza Civic Center Ice Arena. 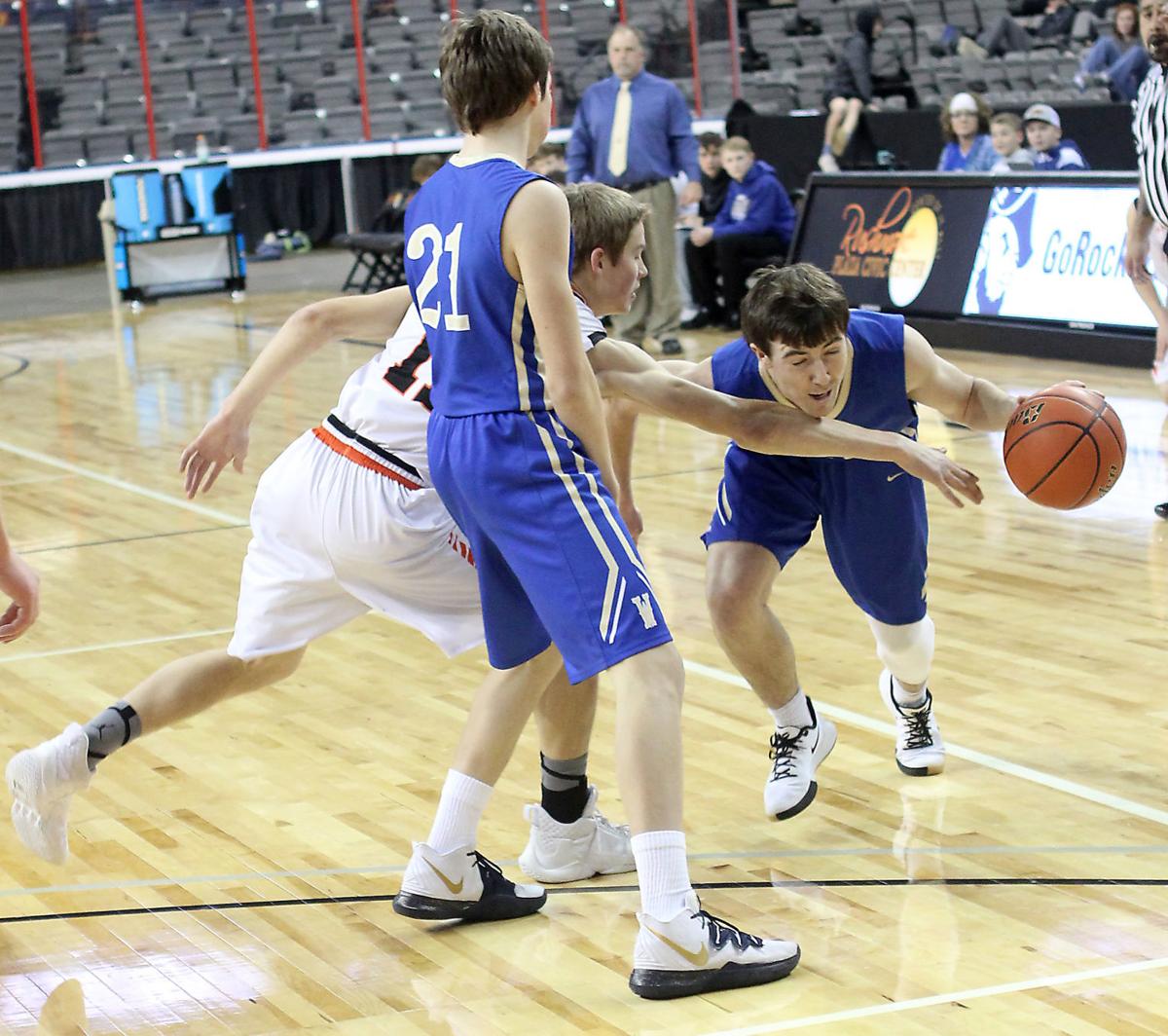 Faith's Harland Groves reaches across a screen to try to steal the ball from Wall's Bridger Amiotte in Saturday's West River Tournament finals.

It was Faith's first title since the 2016 season.

The Faith frontline of 6-foot-7 Jade Mortenson, 6-5 Tyson Shelby and Harland Groves and Treyton Bushong, both 6-1, combined for all 61 of the Longhorn points, many of which came in the paint.

"We have great team chemistry and a great group of guys where everybody can score on any given night," Faith coach Travis Grueb said.

Wall came out with some fire to open the game, leading 10-4 on a pair of 3-pointers from Tack Times and Enoch Cuny.

But Faith didn't take long to respond and tied the game at 12-12 heading into the second quarter.

"We didn't move the ball very good at the beginning, but then we just got comfortable and did what we do good, sharing the basketball and knocking down shots," said Groves, who was the tournament MVP after scoring 21 points in the title game.

"I thought after the first quarter our defense dug in," Grueb said. "We started contesting shots and flying around a little bit better."

The Longhorns controlled the second half, led by Groves and Selby, leading 41-25 going into the fourth and 49-27 three minutes into the quarter.

Along with the 21 points from Groves, Shelby finished with 16 points, followed by Bushong with 13 and Mortensen with 11.

"We're a tough matchup because we have three kids who can really score in the paint with moves in the post," Grueb said. "We look to get in with dribble penetration or post feeds and then we will go paint kickouts for 3s."

With the win, the Longhorns moved to 9-1 on the season, with their lone loss to rival Timber Lake.

While winning the West River was one of their season goals, Groves said they have more for the season.

"We have been looking forward to this year for a while," Groves said. "This group has been playing good together. It's been fun."

Added their coach: "We like where we are at right now but we are nowhere close to the end," Grueb said.

Groves, Selby and Mortenson were all named to the all-tournament team, along with Andrew Law and Kole Gallino of Wall. Also named to the team were Luca Brooks, Jayden Caylor and Jesse Claycomb of Upton, Wyo., Huttson Weeldryer of Newell, Wrider Allison of Hot Springs, Lane Wood of Moorcroft, Wyo., and Chance Derner of New Underwood.

Rapid City Central couldn’t quite complete its comeback on Sioux Falls Washington, as the Warriors built a double-digit lead early then held o…

Faith's Tyson Selby is fouled by Wall's Kole Gallino when Gallino tries to block his shot in the lane Saturday night in the West River Invitational title game at the Rushmore Plaza Civic Center Ice Arena.

Faith's Harland Groves reaches across a screen to try to steal the ball from Wall's Bridger Amiotte in Saturday's West River Tournament finals.