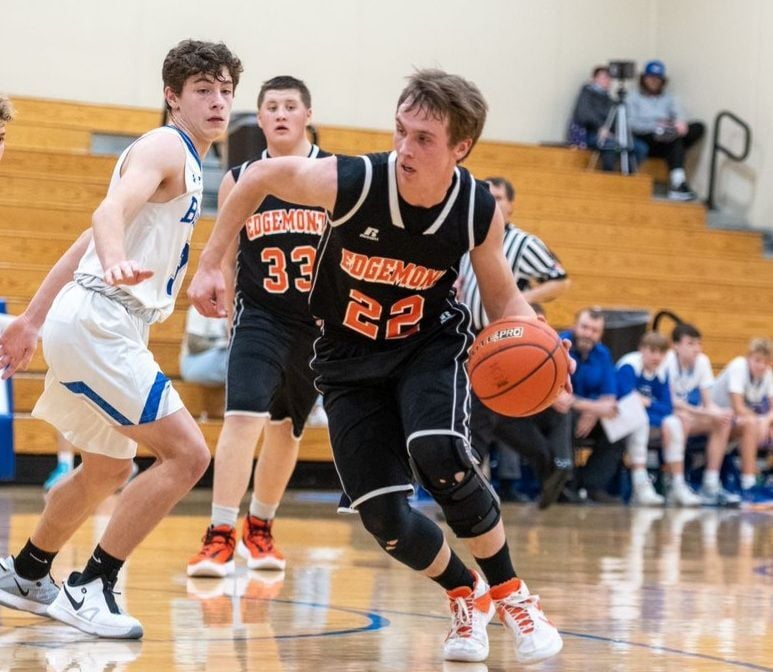 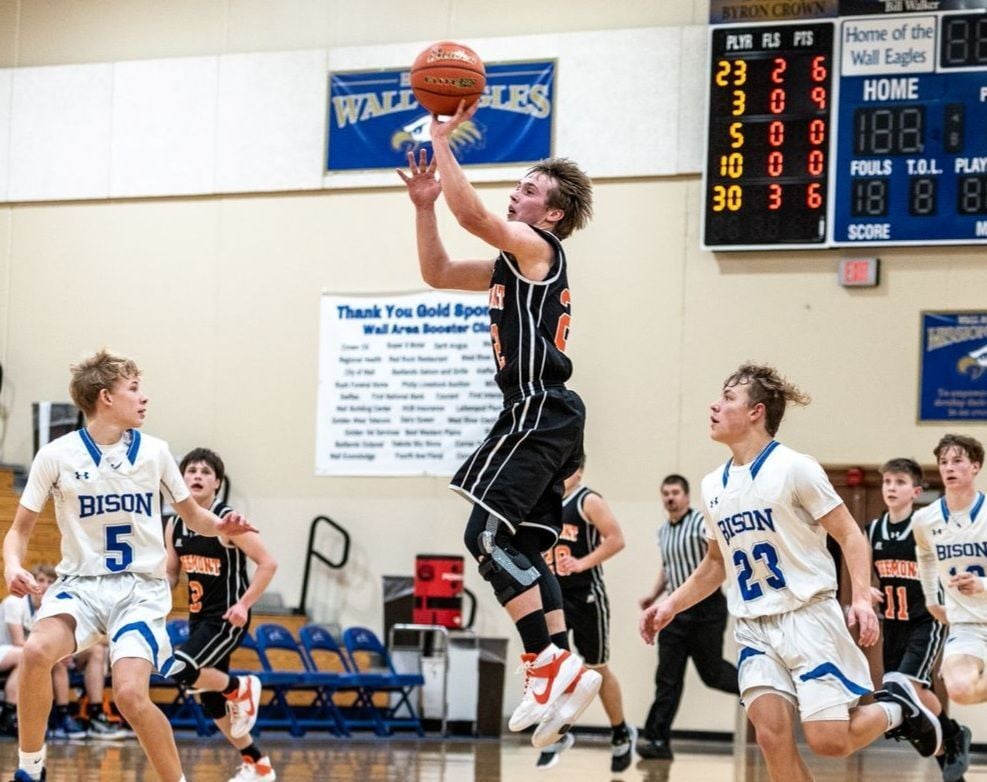 Edgemont's Caleb Simons, center, goes up for a shot against Hot Springs in a recent game. Simons is averaging 23.5 points and 11.5 rebounds a game for the Moguls this season. 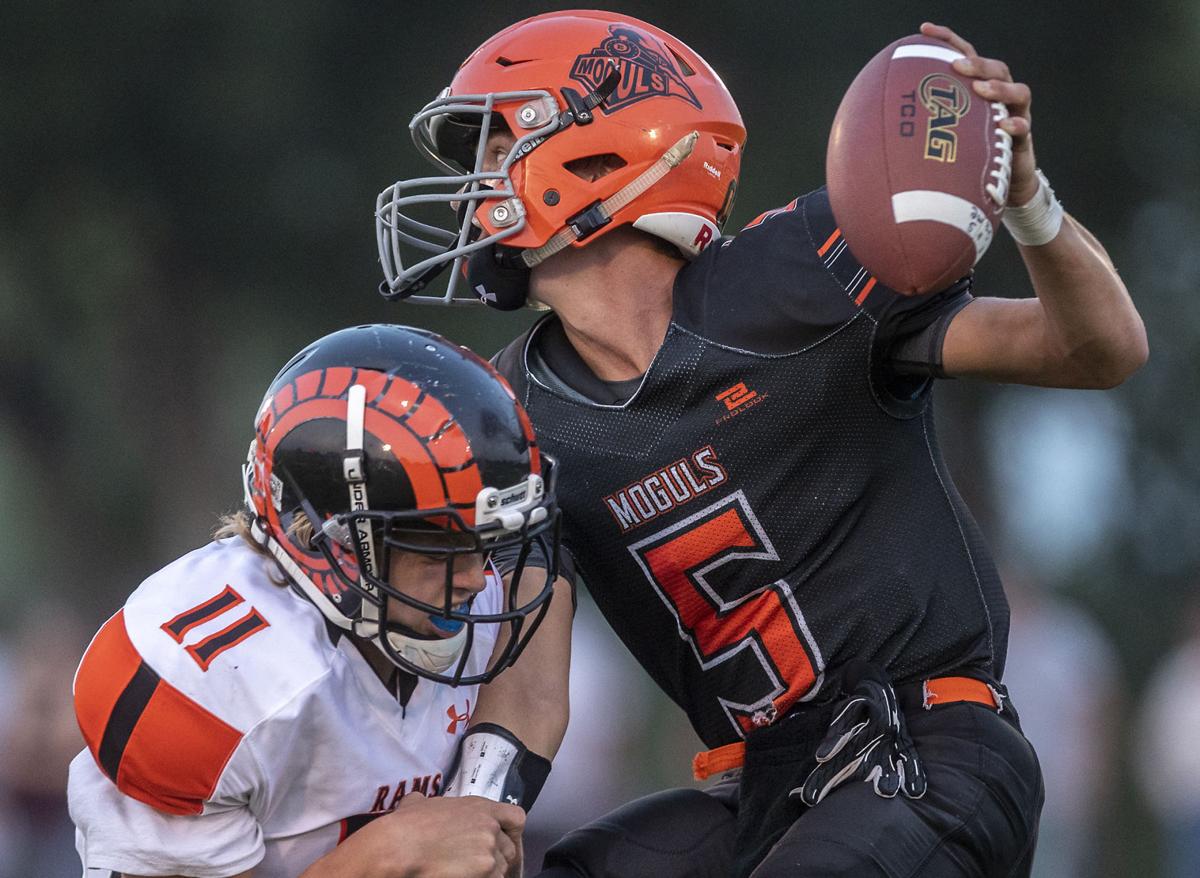 Edgemont quarterback Caleb Simons tries to get away from a Crawford, Neb., player in a 6-man football game in 2018. Simons has signed to play football at Black Hills State University. 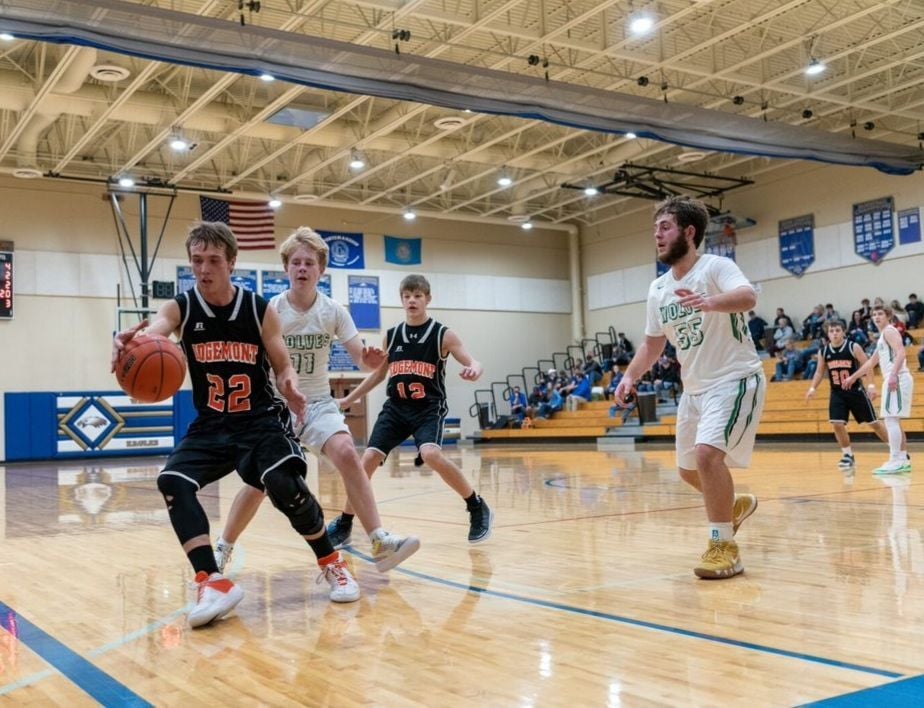 Edgemont senior Caleb Simons goes after a loose ball against Moorcrift, Wyo., earlier in the season. Simons has been on the Mogul varsity since he was an eighth-grader.

Some may say that growing up in a small town isn’t real exciting for a teenager, but for Edgemont’s Caleb Simons, it has definitely had its perks as an athlete.

Simons, a senior and a multi-sport athlete, became the all-time leading scorer for Edgemont basketball (boys and girls) Monday night after surpassing Laura Sedlacek, who held on to that title since the 1990s.

Last season, he surpassed Lathen Stevens, who held the scoring record on the boys’ side, and was one of the team’s standout players when Simons entered the program as an eighth-grader.

Heading into his first season of basketball, Simons knew of the school records, but didn’t really think he’d be where he is now and admits getting the record was a bit humbling at first.

“When I was a freshman, I didn’t think I’d get as far as I have,” he said. “It gives me a little more motivation to keep working hard and pushing to strive to do better for the last couple of games we’ve got this season. It is definitely exciting for me.

“When I was in junior high, I knew the records and I knew they were reachable if I stayed dedicated and worked hard.”

On the court early

Edgemont head basketball coach Joe Martin could see from the beginning that Simons was going to be an every-day player for the rest of his career.

“This is our fifth year working together and coaching him,” he said. “In his first game as an eighth-grader, we lost by one and he had a chance at a game-winning layup. After he missed, he was so aggressive that he immediately went for the rebound and fouled this kid from New Underwood in a one-and-one situation. Even then, as an eighth-grader, I knew he was one of those kids who needed to be on the floor.”

More than anything for Martin was Simons' work ethic early in his athletic career, especially once the season was over.

“He started working hard to set himself up for success in junior high,” Martin said. “In eighth grade, he started running track, and that work ethic really started to show during track season. We would lift weights Mondays and Wednesdays during track season, and he attended every single session as an eighth-grader.”

While Simons surpassed Sedlacek’s scoring record with 1,570 points, he isn’t only known for his scoring ability as he also holds the record for career rebounds at 708 and free throws made at 369.

He is currently averaging about 23.5 points and 11.5 rebounds a game to lead the Moguls this season.

He credits the hard work he has put in over the years to something his dad (Sam) taught him when he was young. It also helped to have athletic siblings in the house to push him.

“When I was young, something my dad always pushed was that if you are going to do something, you might as well do it to the best of your ability,” he said. “My older brothers also made me more competitive, and it made me want to be better than them. When I got to the age where I was allowed to start weightlifting, I just made sure Coach (Martin) was all right with it and got to the weight room as much as possible. Not for anything in particular, but just preparing myself to be better all around.”

Luckily for Simons, he was able to work with previous standout Stevens and is still friends with him to this day.

“As a kid I always looked up to Lathen Stevens,” Simons said. “He was the leading boys’ scorer, and I always wanted to be better than him.”

Sharpshooter on the range

Along with his love for basketball and football, Simons has had plenty of success in clay target and trap shooting, a hobby he’s taken up over the years alongside his dad.

“I spent a lot of time doing that in the summer as a hobby,” he said. “My daily routine was I would lift weights in the morning, go to work, and then if I have time, I’ll go out to the trap range for practice. Last year, I was 80 points away from making the All-America team, and I shot close to 30,000 rounds, counting practice.”

While he didn’t make the All-America team, he did succeed, earning a state champion runner-up in clay target league, state champion as an eighth-grader (first year), runner up as a ninth-grader, and state champion the last two years.

Moving forward, Simons said he will continue trap shooting, but also realizes that he may have to take a break in college to focus on football.

Speaking of football, Simons — like all of the sports he has competed in — excelled on the football field as well.

Outside of basketball, Simons and Stevens followed very similar paths as both athletes will be a part of the Black Hills State University football team at the end of the year. Stevens is already a starting defensive back and the 5-foot-11, 170-pound Simons was recruited by the BHSU staff as a wide receiver and quarterback.

In his junior 9-man season, he finished with 62 completions on 157 passing attempts for 537 yards and four touchdowns.

Additionally, he was a standout in the backfield, closing out the season with 114 carries for 1,181 yards and 19 touchdowns, while also having a 10-touchdown rushing game against Dupree as a junior.

Considering the size of the school, he also played defense, racking up 81 tackles (35 solo), two sacks, a forced fumble and two interceptions.

His following season, he was only able to play seven total quarters due to an injury and the Edgemont program not playing a full season because of low numbers.

Simons said it was tough to decide between basketball and football at the collegiate level, but ultimately he felt as though he would be better off playing football due to the opportunities that would be presented along the way.

Mentors to look up to

Along with the hard work, Simons has had some great influences around him over the years, crediting his parents and family, as well as Coach Martin.

“My parents have been there for everything. They’re always there,” he said. “When I was younger, my dad was working in the oil fields, but since leaving that position, he has been more involved and hasn’t missed a game. Mom (Chelsie) doesn't ever miss a game either and they are always very supportive. My parents always help with the mentality that I want more. Every athlete gets to a point where they might feel well-rounded, and it is pretty good to have someone there to tell you that you want more. Mom and dad have helped with that. My brothers and sister, aunts and uncles are very supportive and make it to games whenever they can.”

He credited Martin’s dedication to the program and the players over the years.

“Coach Martin is my favorite coach that I have had,” he said. “When I was young, I always wanted to prove myself to Coach. I was aggressive and wanted to show him I was serious, and he didn’t like that I might have played a little too rough in PE. Coach is the definition of consistency. If you need him, he is there. He doesn’t miss a beat, he keeps track of everything. In practice he is flexible and gets his coaching point across. As a captain, if I say something, he just helps us go off of that. He is just so consistent and always helpful.”

Leaving the basketball program may leave a void that is hard to fill, but Martin feels as though Simons is leaving the Moguls in a pretty good place, thanks to his leadership over the years.

“When Caleb stepped in, we were losing some talent out of that graduating class,” he said. “I believe he is leaving our basketball program in really good shape. I think some of the standards he has set, and some of the work ethic he’s instilled in the team, are values they will carry for years. Caleb does so much statistically, but I believe the kids here will pick up their own share and everyone will play well next year. I think we will be a good basketball team because of the way Caleb has helped develop his teammates along the way.”

Simons is excited for the future and says he is taking everything day to day.

“Obviously, basketball is going to be over soon and I’m taking every day as its own,” he said. “It is going to be sad. I don’t want basketball to end because it may be my last time playing basketball. Hopefully this time next year, I’ll be ready and in shape for football. The day after basketball ends, I’ll be in the weight room that next Monday, just to keep bettering myself so I can be ready to go for my next opportunity.”

Simons’ final regular-season scheduled game (a couple more might be in the works) as a Mogul will be Monday night when they host Fall River County rival Hot Springs.

What is ‘NBA Top Shot’? Latest sports craze topped $130 million in sales in a week.

On first glance the concept sounds like a preposterous scam. A person can bid to buy a specific NBA highlight video that is already a few clicks away via YouTube or Twitter.

Nets head coach Steve Nash expects Kevin Durant (hamstring) to return to play before the March 7 All-Star Game in Atlanta, but is not putting any pressure on the star forward to come back before he’s ready.

Edgemont's Caleb Simons, center, goes up for a shot against Hot Springs in a recent game. Simons is averaging 23.5 points and 11.5 rebounds a game for the Moguls this season.

Edgemont quarterback Caleb Simons tries to get away from a Crawford, Neb., player in a 6-man football game in 2018. Simons has signed to play football at Black Hills State University.

Edgemont senior Caleb Simons goes after a loose ball against Moorcrift, Wyo., earlier in the season. Simons has been on the Mogul varsity since he was an eighth-grader.