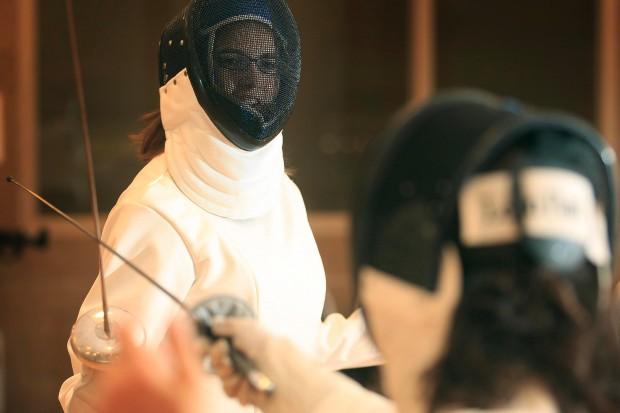 Stephanie Athow, left, and Karen Braman have a practice bout as they warmup during a meeting of the Black Hills Fencing Club on Thursday, Sept. 30, 2010, at the Rapid City Aquatics Center. (Ryan Soderlin/Journal staff) 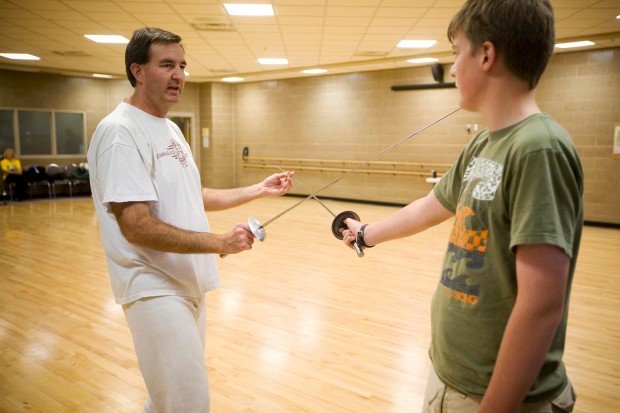 Epee, piste, parry, riposte, repartee, touche — the terminology immediately tells one this sport is anything but choreographed Hollywood swashbuckling. It is fencing, the most subtle, and perhaps elegant, of the so-called combat sports.

Originating from 16th-century French and Italian swordplay, fencing as an artful sport has been contested in every modern Olympic Games. The Black Hills Fencing Club and its nearly 30 members have been fostering the sport in Rapid City since 2003.

Beginning today, the Black Hills Fencing Club is hosting its annual 10-week instructional session for beginners of either gender — those who have no experience in the sport — at the multipurpose room of the Rapid City Aquatic Center.

“What we do is introduce everybody to the sport,” said Alan Anderson, one of several club members who serves as a session instructor. “We teach them the footwork, we teach them the fundamental blade work, we give them an opportunity to try it. You learn a little bit about (the history) as you go along. At the end of 10 weeks, somebody should be able to pick up a blade and at least walk on to the piste (bout platform) and say, ‘Yeah, I know how to do this.’”

One of the goals of the instructional session is to expose the unique features of fencing, including its technically sound and safe equipment, to a local audience whose exposure to the sport may be limited to short segments during Olympic television coverage.

“Fencing ... is significantly different (than sword fighting), especially from the choreographed perspective,” Anderson said. “The movements are very different. They are very small, they are very precise. In real fencing you barely see what they’re doing.

“(The instructional session) is for anyone who has an interest in swordplay or is looking for a different kind of sport. A lot of people are trying to stay outside the mainstream sports. People don’t always fit into the traditional sports.”

The Black Hills Fencing Club, a member of the United States Fencing Association, also holds weekly practices for those already hooked on the sport’s combination of speed, agility, precision, and disciplined strategy.

“We focus on the athleticism and the strategy,” Anderson said. “For us, it is more about the sport and competition. The athletic movements behind it — how do you make yourself faster, quicker and stronger? In addition to that, there is the strategy. Not just am I faster than that person but am I smarter than that person in the sense that can I do the appropriate moves to keep them from touching me and to give me the opportunity to defend myself.”

Though the instructional session will focus on the “foil”, a small, light, precision pointing weapon from which the basic rules and fundamentals of fencing can be learned, club members also conduct bouts using the other two weapons: the heavier, more traditional rapier “epee” and the “sabre,” a slashing blade akin to the cavalry sword. The use of each of the three weapons has unique rules and requires subtle movements within formally stylized tactics. Club fencers usually have a weapon of choice.

“Greater degree of freedom and motion,” said club member Karen Braman of her preference for the sabre. “More swashbuckling.”

“Epee ... it’s the most realistic of the three,” Stephanie Athow countered. “Whoever strikes first gets the point, kind of like whoever draws blood first back in the medieval days.”

Though the technical aspects of bouts and the target areas of the body onto which a “touch” can be scored differ depending on the weapon in play, the common thread is that all provide fencers with both a physical and mental challenge.

“There is a lot of practice maintaining proper position and such,” said Braman, one of the club’s instructional assistants. “It’s a great physical workout, but what’s more fun is the mental aspect of trying to out-strategize your opponent. You try to predict what they are going to do, so then you try to do something to counteract that. It’s a lot of the mental game that I enjoy.”

Owing to fencing’s unique nature, members of fencing clubs tend to have equally unique backgrounds and interests that draw them to the sport. The Black Hills Fencing Club is no exception, counting doctors, engineers, teachers, students and ranchers, among others, as members.

“It’s typically, I don’t want to say eclectic, but in a lot of cases the people that join the club tend to be a little bit ‘different,’” Anderson said. “We get a broad range of people just because of their background and interests. So (fencing) is unusual in the sense that we get a lot of people involved and they always have kind of a differing take on it.

“Fencing is a life-long sport and it’s kind of why we want to stay around and get people involved.  We take them traditionally from about the age of 12 ... and our oldest member is 70-something. It appeals to a wide range of people.”

Stephanie Athow, left, and Karen Braman have a practice bout as they warmup during a meeting of the Black Hills Fencing Club on Thursday, Sept. 30, 2010, at the Rapid City Aquatics Center. (Ryan Soderlin/Journal staff)