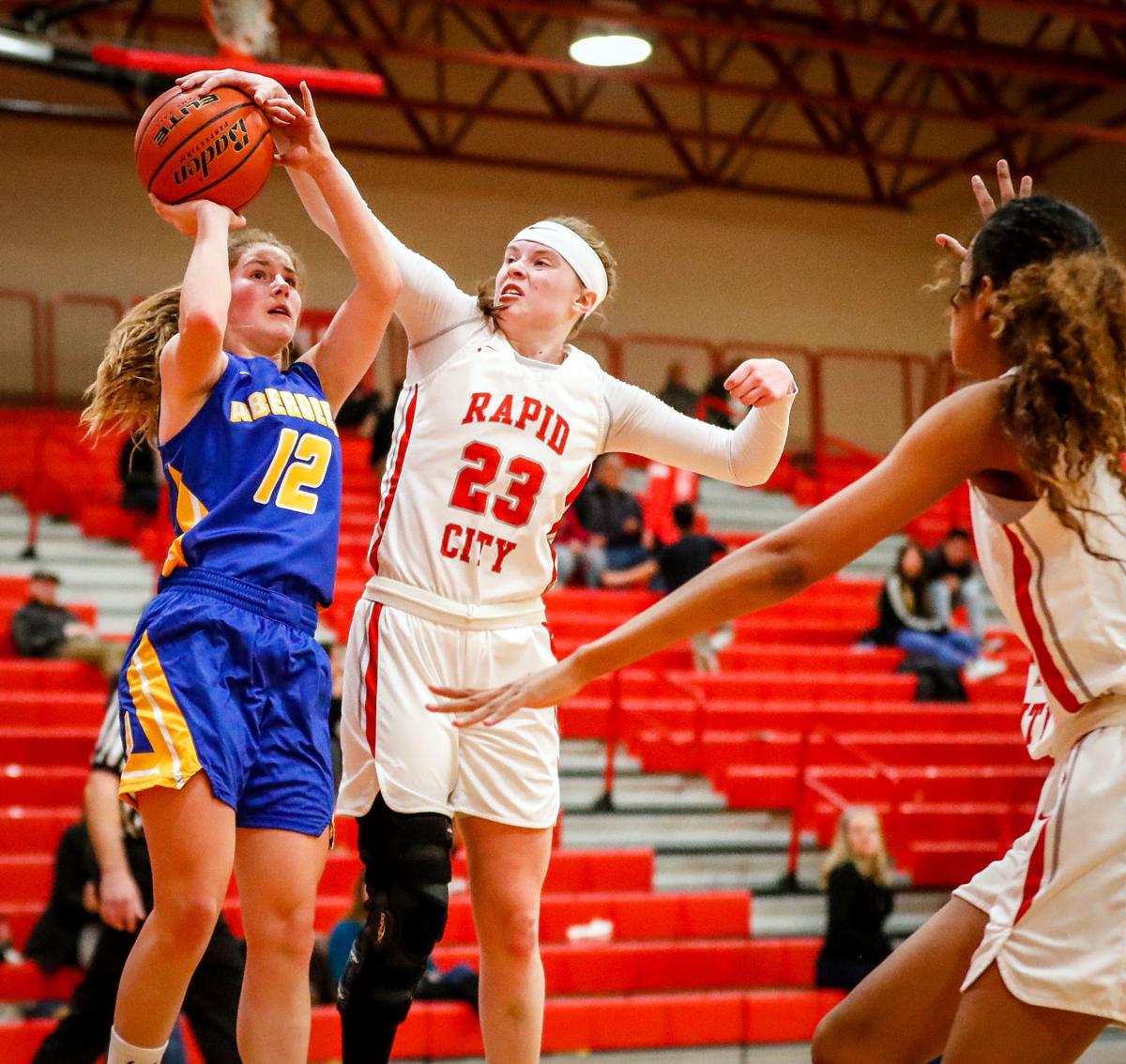 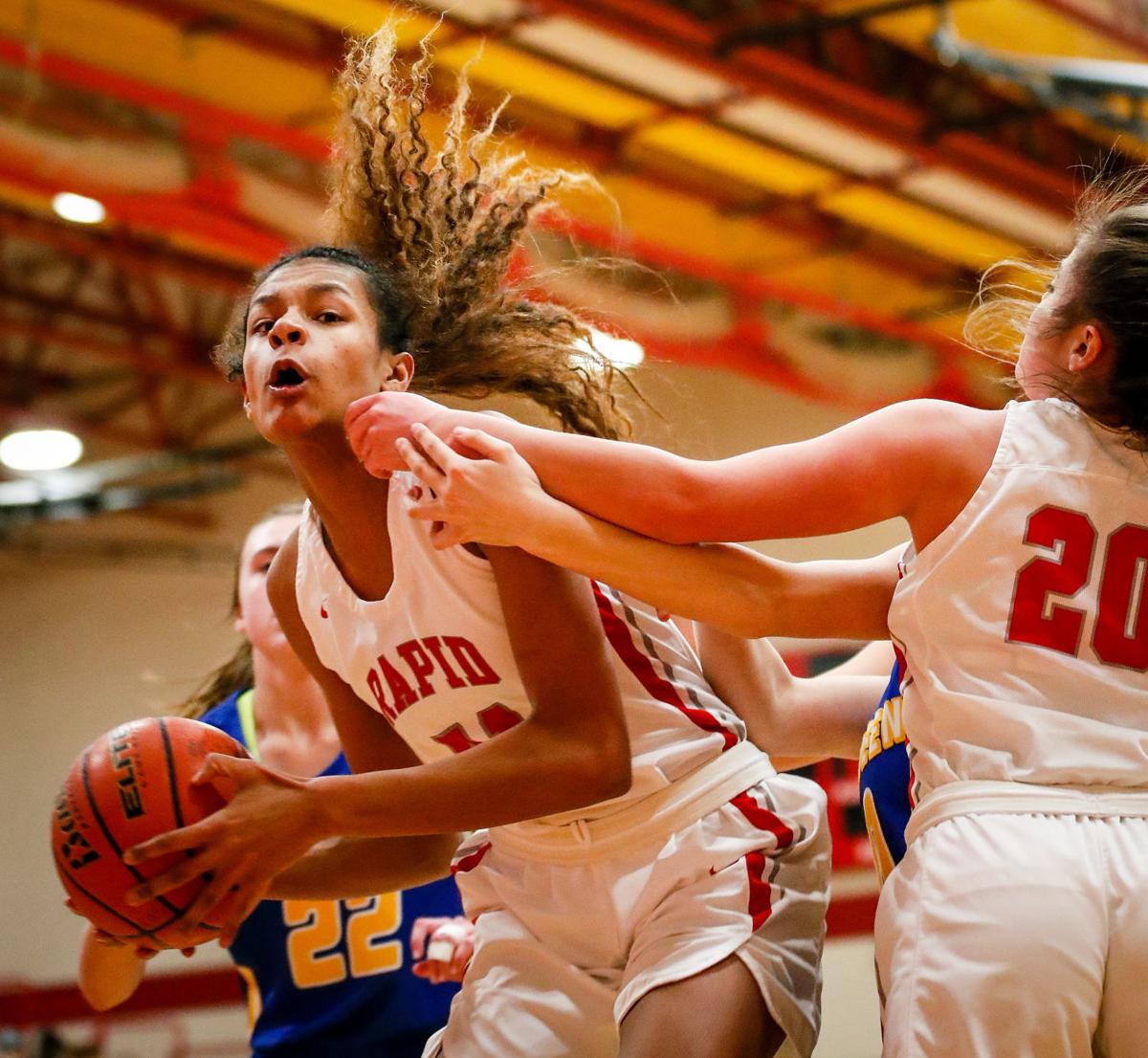 Rapid City Central's Josie Hill (41) comes down with the rebound as Central hosts Aberdeen Central in Rapid City on Friday. 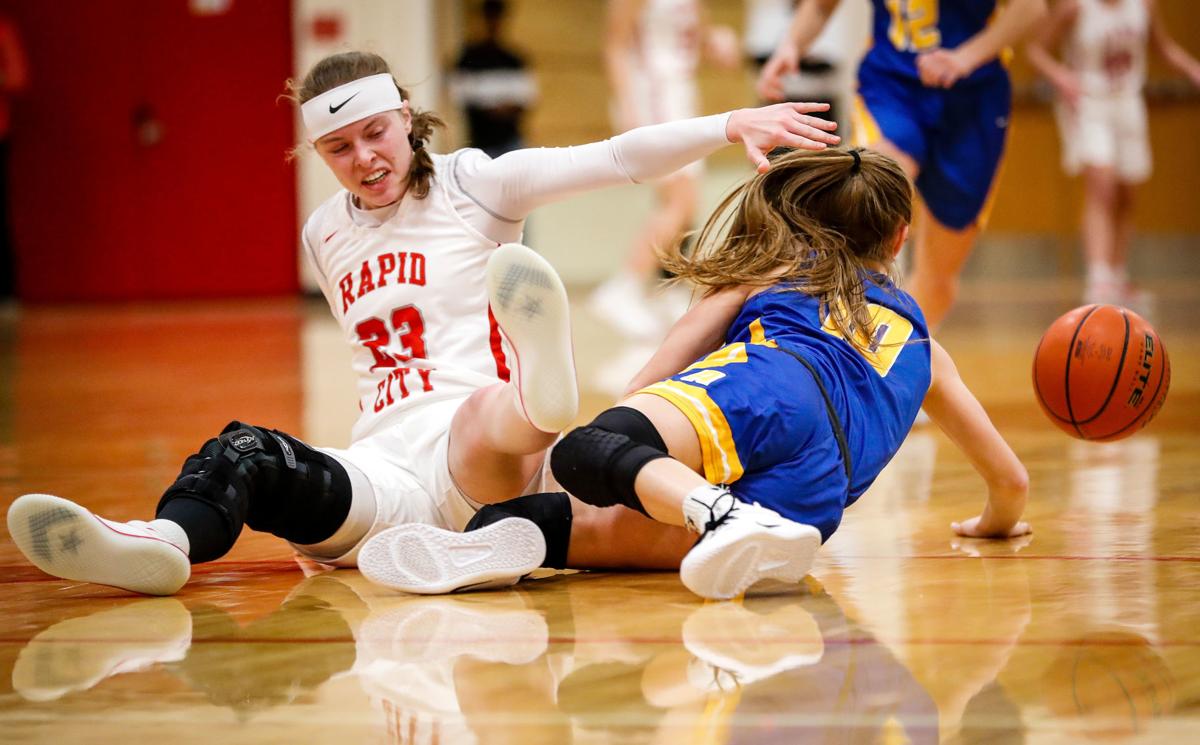 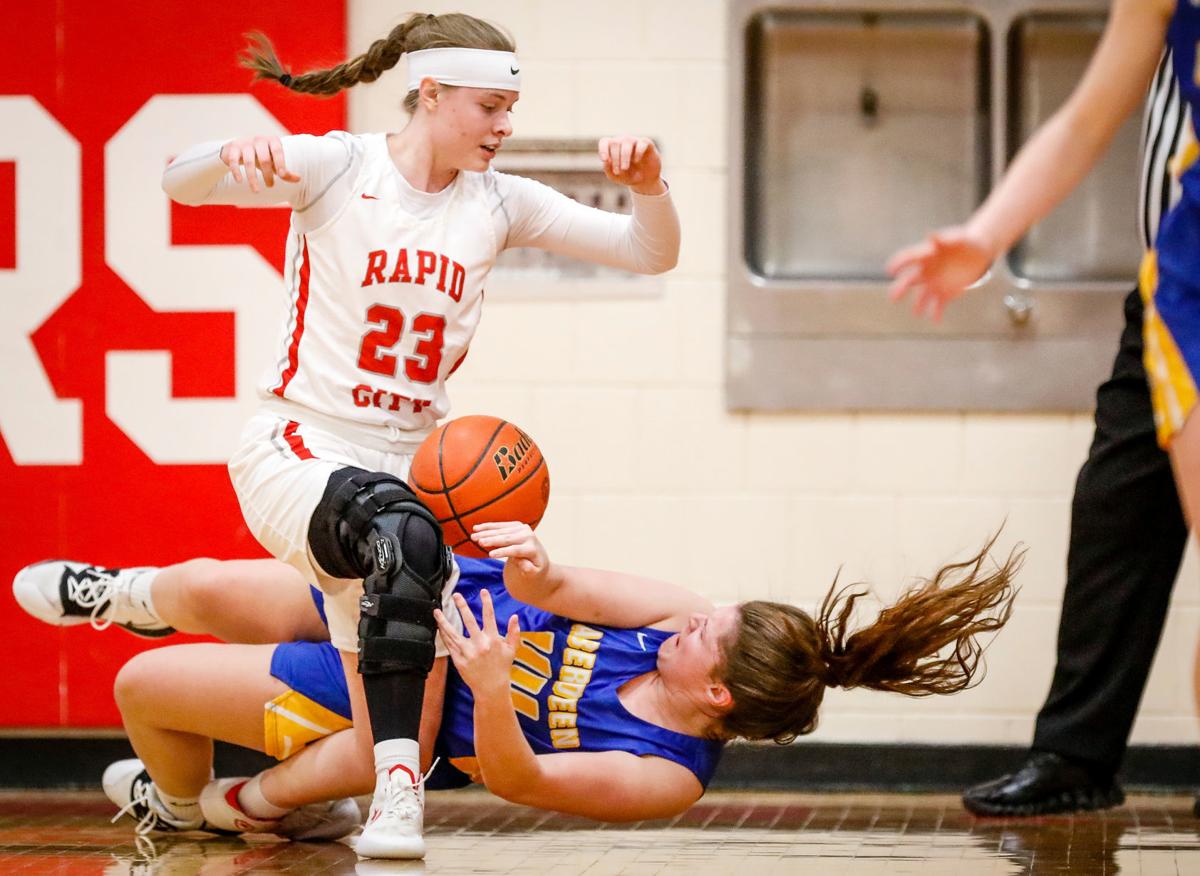 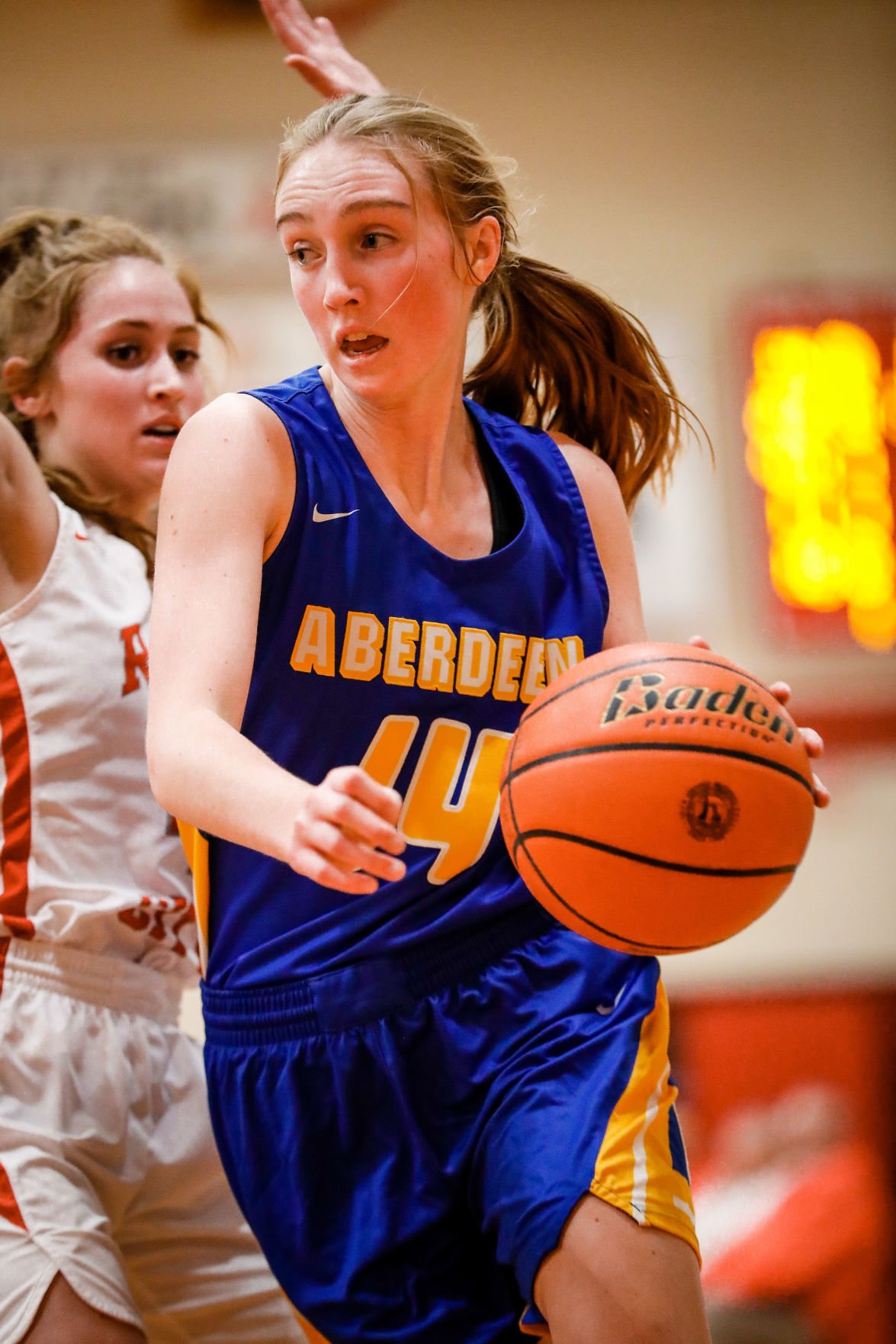 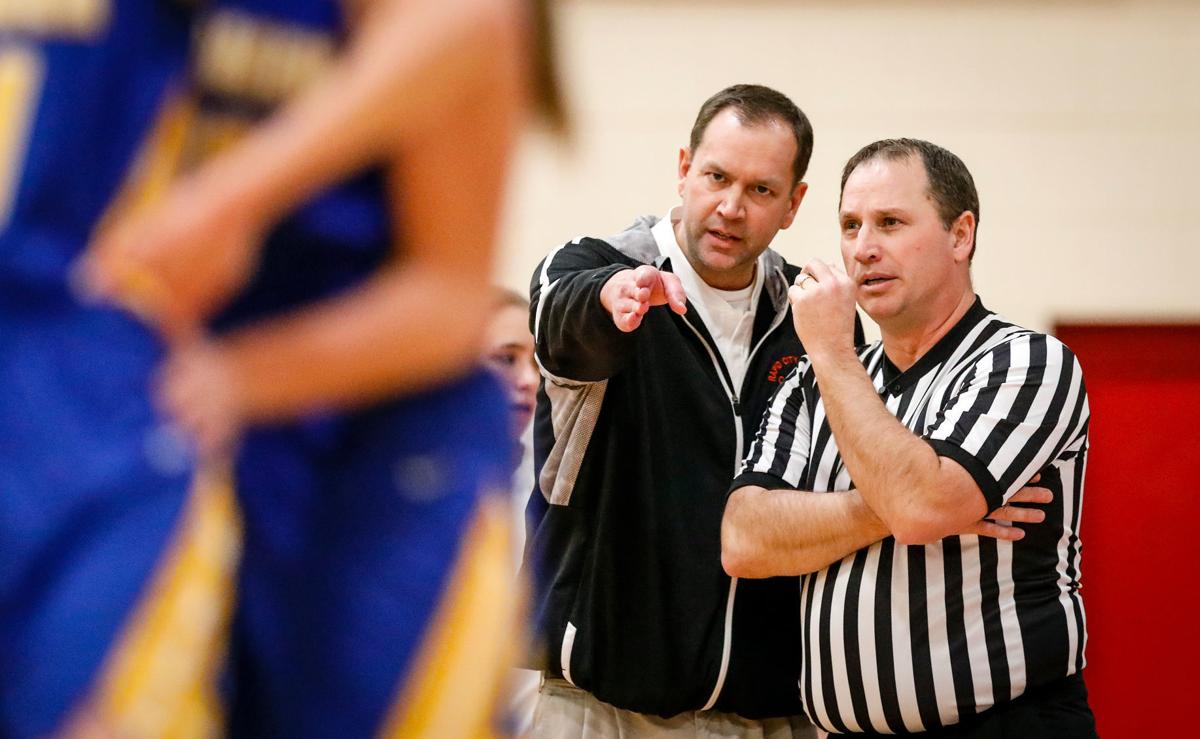 It's been somewhat of a slow start for the Rapid City Central girls' basketball team this season with multiple new faces on the court.

The Cobblers might have played their best game of the season Friday night, stopping Aberdeen Central 47-39 at Howard Naasz Gymnasium in a contest that wasn't as close in the fourth quarter as the final score indicated.

"We came in as a fresh group, still figuring out what works best for us," Central junior Jordon Heckert said. "We needed this tonight, to come out and be able to say like, 'This is what we can do.' It was really needed tonight, big time."

A close first half (19-16 Rapid City), the Cobblers came out and took control in the third period, outscoring the equally young Golden Eagles 18-7. Rapid City Central did it from the outside and inside and on the defensive end of the court.

The Cobblers led by as much as 19 points a couple of minutes into the fourth quarter.

"We came out and fought from the beginning to the end, something we hadn't been able to do all year. That's what stopped them (Aberdeen), and we have to just keep fighting," Heckert said.

Central coach Kraig Blomme said it was one of their better all-around games this season.

"I think we're making strides defensively to play good, solid defense," he said. "Offensively, it was a lot of everything tonight. We had some post scores, we hit some 3-point shots, we had some transition baskets. I'm really happy for the girls with the way we played tonight."

Heckert and fellow junior Kenya Merrival had the hot hand for the Cobblers, combining to hit 7-of-15 3-pointers as Rapid City was 8-of-22 for the game.

"When you can get your teammates shots, and when you can get going too, it sets up your defense and gets things rolling and brings up the energy," said Heckert, who hit 4-of-8 3-pointers, including three straight in the third, and led the Cobblers with 17 points.

Aberdeen Central played its best basketball in the final minutes and was able to cut the Cobbler advantage under 10 on a last-second 3-pointer by Olivia Bertsch. But the Golden Eagles, 3-2, shot just 30 percent from the field and hit just 1-of-14 3-pointers. Brooklyn Kusler led all scorers with 19 points.

"We were a little short handed; we have some kids dinged up and I think that plays into things because we didn't have a very solid rotation," Seiler said. "But bottom line, we just need to have a better effort."

Seiler said their youth and inexperience leads to a lot of inconsistency, and it all magnifies when things don't go right.

"We come out and miss a layup right away, we miss our first six free throws, and kids start to get tight. You miss some shots, you probably force some shots, and that is the way it is when you have a team that is inexperienced," she said. "That is something we're going to have to fix, and I feel like it is something we can fix."

Merrival finished with 13 points and seven rebounds for the Cobblers, while 6-foot-2 sophomore Josie Hill added eight points, eight rebounds and a couple of blocked shots.

"Josie did a great job defending and she scored a few baskets. She made a couple of big free throws in the fourth quarter," Blomme said. "I thought Kenya Merrival had a big game too. She had six rebounds by halftime, and she hit some 3-point shots for us. It is nice to see our girls start to step up their game a little bit."

With the win, the 3-5 Cobblers will continue their homestand Saturday afternoon (1:30 p.m.) against Pierre. Blomme hopes it will be a good game to continue their improvement.

"We had a lot of inexperience at the varsity level coming into this year," he said. "Up to this point we had been searching for different things offensively we can do to be successful. Tonight I think our 3-point shooting was key for us, and we're starting to shoot the ball better, which helps every team.

"It is going to be a totally different game (Saturday). They (Pierre) will be a team that will pressure us from the end-line to end-line. I talked to the girls about it. It will be a tough, aggressive game for us, but we're excited."

"This is just one of two nights. We want to just keep going from here and take the energy into (Saturday) and the rest of the season; learn from this and keep going," she said.

No. 2 Raiders roll to win over Govs

Rapid City Central's Josie Hill (41) comes down with the rebound as Central hosts Aberdeen Central in Rapid City on Friday.