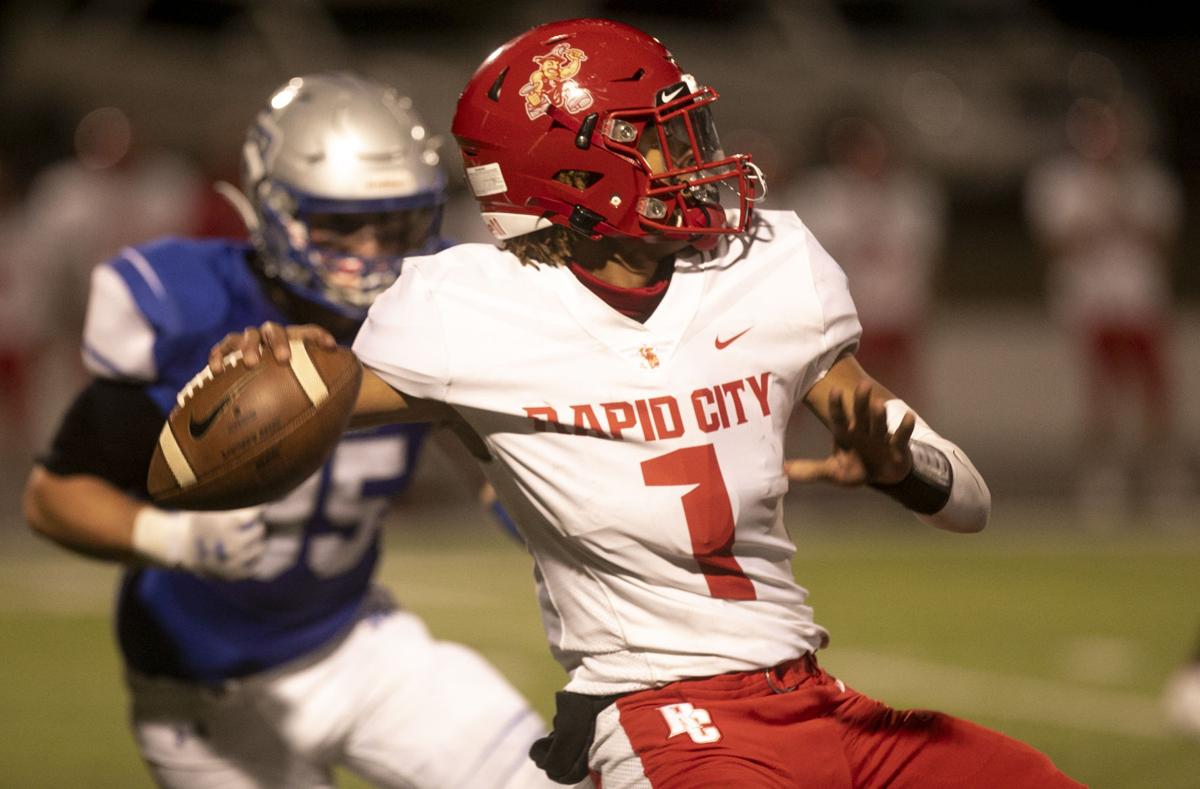 Rapid City Central quarterback Kohl Meisman prepares to make a pass on Friday at O'Harra Stadium during the game against Rapid City Stevens. 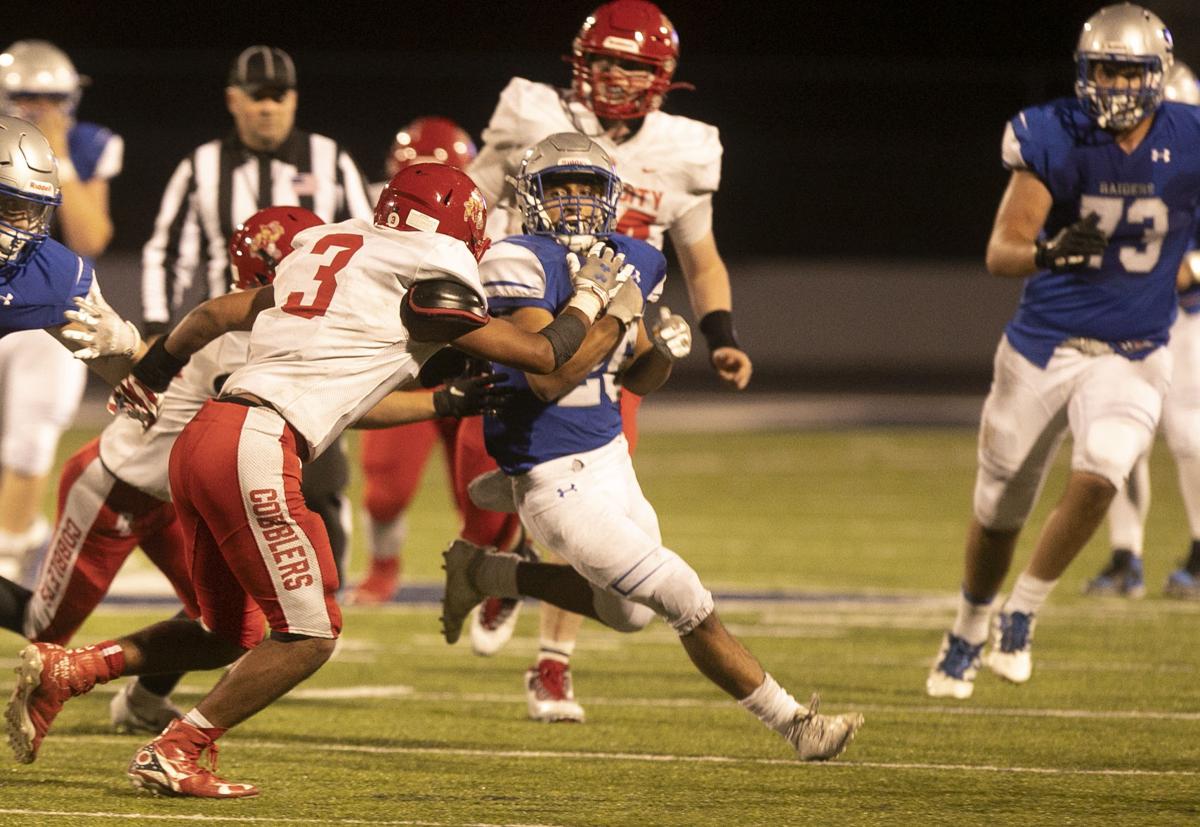 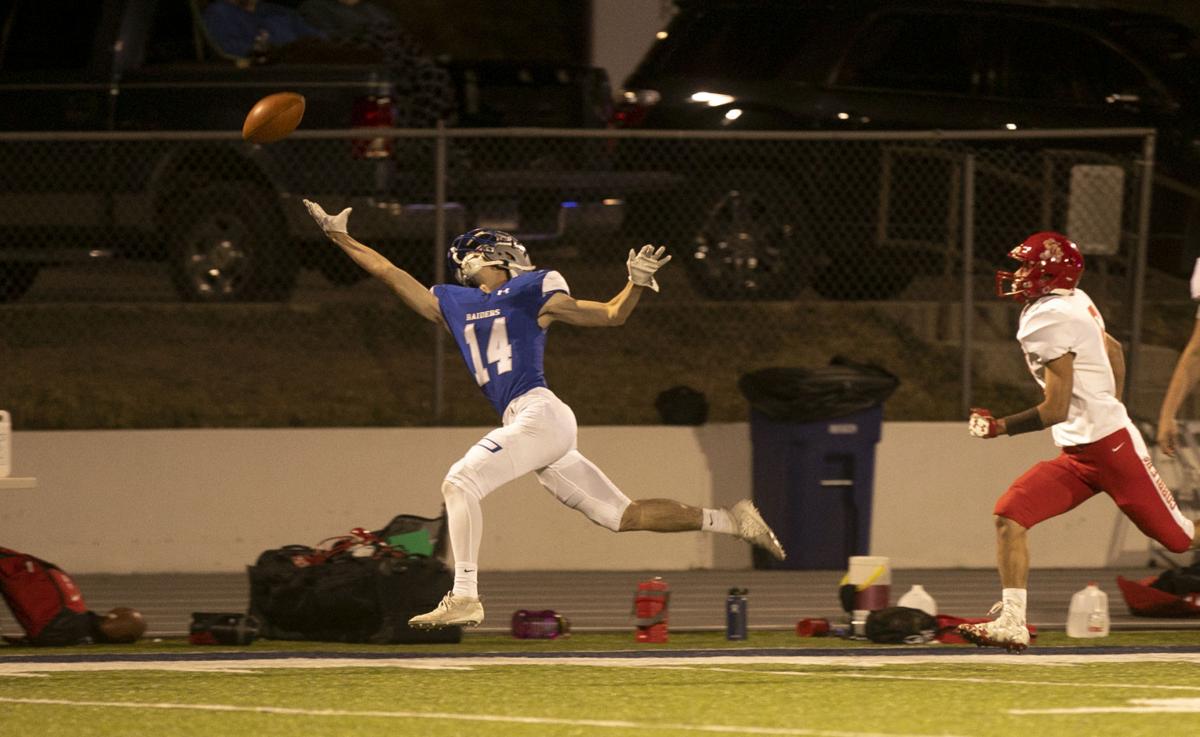 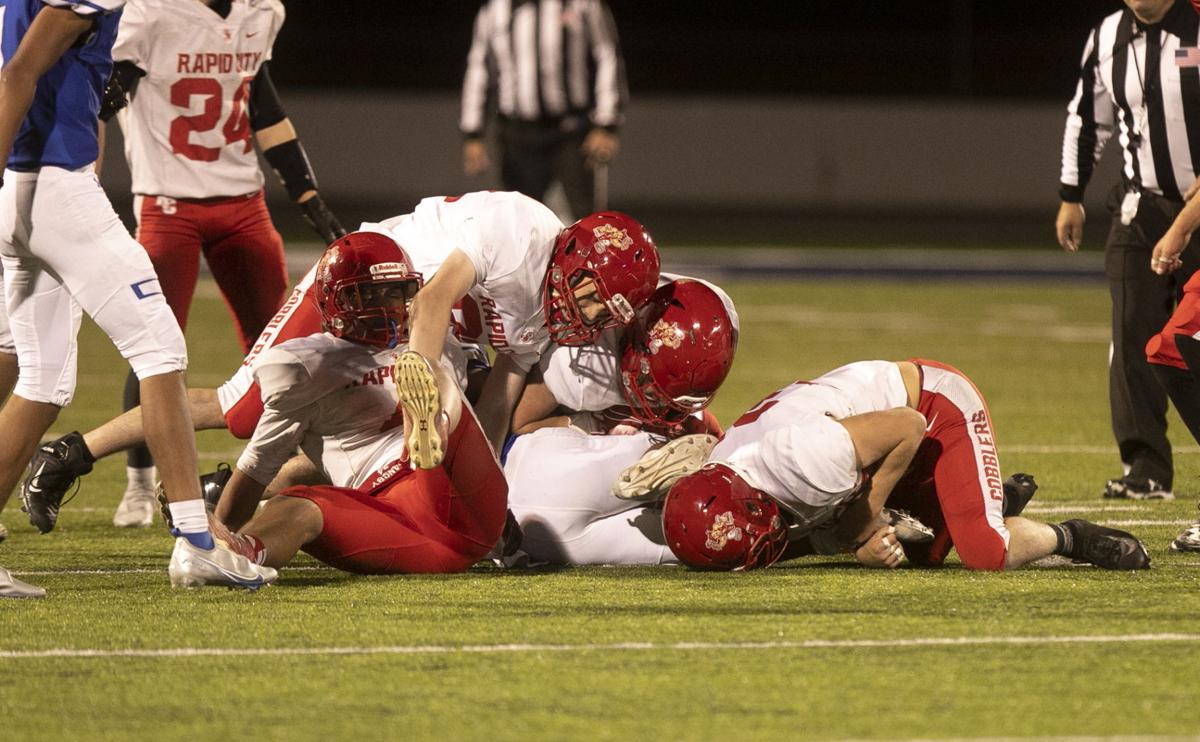 Dropping back to pass on third down in enemy territory, Rapid City Central’s Kohl Meisman was intercepted, and forced to walk off the field after missing a chance to move ahead against rival Rapid City Stevens with under six minutes to play.

But after the Cobblers forced a punt, Meisman redeemed himself by hitting a wide open Micah Swallow downfield for a 70-yard touchdown to give Central the lead with 2:13 left.

It was then up to the Cobbler defense, which broke up a Raiders Hail Mary in the end zone as time expired to secure a 32-28 victory and overcome a two-possession deficit in the fourth quarter to get their first win of the season in Class 11AAA football action Friday night at O’Harra Stadium.

The win also ended a 15-game losing skid for the Cobblers that dated back to the final game of the 2018 season.

“It’s rivalry week, so we wanted to come out and get a (win), so it feels great,” Meisman said. “I just looked at my playmakers, tried to make something happen and I know I got the guys for it. Once you get the first (win) out of the way, you keep rolling.”

Meisman finished 7 of 14 passing for 189 yards and threw three touchdowns passes, all of which were caught by Swallow, who ended with three receptions for 159 yards. Lane Darrow ran for 167 yards on 28 carries for Central (1-5) and scored on the game’s opening kickoff.

“I’ve won a lot of games before I got here, and I knew what I was up for, and I knew there was a streak that needed to be ended, and I felt like I might be the guy to do that, and these are the kids to do it and these are the coaches to do it,” Cobblers head coach Neal Cruce said. “It took us a few games, but we got the job done and that’s all that matters. We’re going to enjoy it, but we’ve got to turn the page and get ready for next week.”

Uriah Gylnn led the Stevens (0-6) offense with 231 yards rushing on 14 carries and tallied three touchdowns. Quarterback Joe Weber completed just three of 17 pass attempts for 14 yards but ran for 102 yards and scored a touchdown on six carries. Tate Crosswait also went 6 of 12 for 49 yards in the air.

“It’s tough because the boys have worked hard all season, they’ve been steadily improving and it’s unfortunate,” Raiders head coach Michael Scott said. “We just caught a couple bad breaks tonight, and if you give a team life and you let them stick around long enough, things like this happen.”

Darrow’s opening kickoff return went 91 yards into the end zone to give Central a quick six-point advantage after the PAT missed. Stevens’ first play from scrimmage resulted in a lost fumble, but the Raiders got the ball back after Gavin Skinner picked off Meisman. On third-and-9 on the ensuing drive from his own 18, Weber took off on a QB keeper and sprinted 82 yards for the game-tying score. The successful PAT put Stevens ahead 7-6 just over two minutes into the first quarter.

The Cobblers responded by running a no-huddle offense, and strung together an 11-play, 72-yard drive that was capped off by a 26-yard touchdown pass from Meisman to Swallow on fourth down. The failed 2-point attempt kept it a five-point contest.

In the early stages of the second frame, a fumbled snap by Central on first down, recovered by Skinner, gave the Raiders possession in enemy territory. Nine plays later, Glynn capitalized on the turnover by running in for a score from 6 yards out. The successful PAT made it 14-12 with 6:09 left in the half.

After a rushing fumble by the Cobblers put the Raiders at midfield, Crosswait completed consecutive passes to Colton Johnson before Weber converted on a fourth-and-six with an 8-yard keeper. Glynn followed with a 38-yard touchdown on the ground to put Stevens up 21-12 at halftime.

Julian Swallow got Central back within striking distance in the third when he intercepted Crosswait and brought the ball back 87 yards for the pick-six to make it a two-point game at 21-19.

The Cobblers went back on offense late in the frame at their own 49-yard line and moved deep into opposing territory. On the first play of the final quarter, a fourth-and-goal situation from the 1, Micah Swallow was tripped up by Luke Chiolis to end the drive.

Immediately after the turnover on downs, Glynn took a handoff from his own 3 and darted downfield for a 97-yard touchdown to put the Raiders back up by nine.

Central answered right back, however, when Meisman connected with Micah Swallow for a 66-yard score. A blocked PAT made it a three-point deficit for the Cobblers, 28-25, with 9:11 left.

Stevens was forced to punt on its next drive, and after Bryan Roselles picked off Meisman, kicked it away again after burning only two minutes of time and picking up just one first down.

Meisman made his second chance count, tossing the go-ahead touchdown to Micah Swallow after getting a first down on a 13-yard scamper on third-and-11 from his own 12.

“We decided that we need to put the ball in the air,” Cruce said. “They were crowing the line of scrimmage, they were blitzing, timing the snap count and things like that, so we just kind of waited and waited until the time was right, and whenever they tightened that box up, we hit them over the top.”

The Raiders began their final drive at their own 34, and with the help of short runs and a pass interference call, got the ball down to the opposing 23 with three seconds to play. Weber’s deep pass into the end zone failed to find a target, handing Stevens its sixth straight loss to start the season.

“As a coach you can design and draw stuff up, but at the end of the day it’s up to your players to execute,” Scott said. “I’m consulting with my defensive coordinator, and he’s making the right calls and he’s telling them where they need to be, but they need to adjust and adapt and be there. I can design workouts all day, we can push them in practice, but they’ve got to learn how to compete, and compete all four quarters.”

Urias expected to start for the Dodgers against Rays

Astros pitcher Josh James has hip surgery; out 6 to 8 months

ARLINGTON, Mass. (AP) — Tom Yewcic, a multisport standout who played one game at catcher for the Detroit Tigers before spending several years as a punter with the Boston Patriots, has died. He was 88.

Morton expected to start for Tampa Bay against Los Angeles

MLB players extend streak of no COVID positives to 54 days

On their eighth consecutive trip to the postseason, the Los Angeles Dodgers finally became champions again. Mookie Betts streaked home with the go-ahead run for the win.

Rapid City Central quarterback Kohl Meisman prepares to make a pass on Friday at O'Harra Stadium during the game against Rapid City Stevens.