No. 1 recruit Shaedon Sharpe commits to Kentucky. ‘It’s an absolutely huge pickup.’
Share this
{{featured_button_text}}
1 of 2 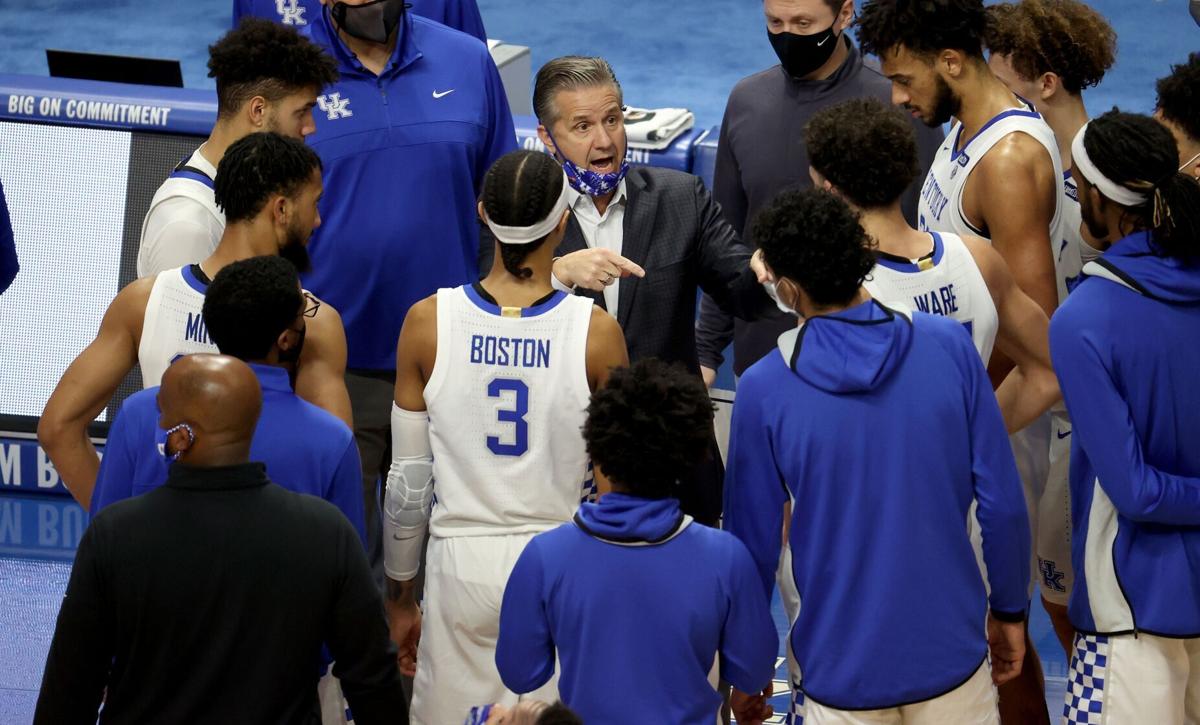 John Calipari the head coach of the Kentucky Wildcats gives instructions to his team against the Vanderbilt Commodores at Rupp Arena on January 05, 2021 in Lexington, Kentucky. (Andy Lyons/Getty Images/TNS) 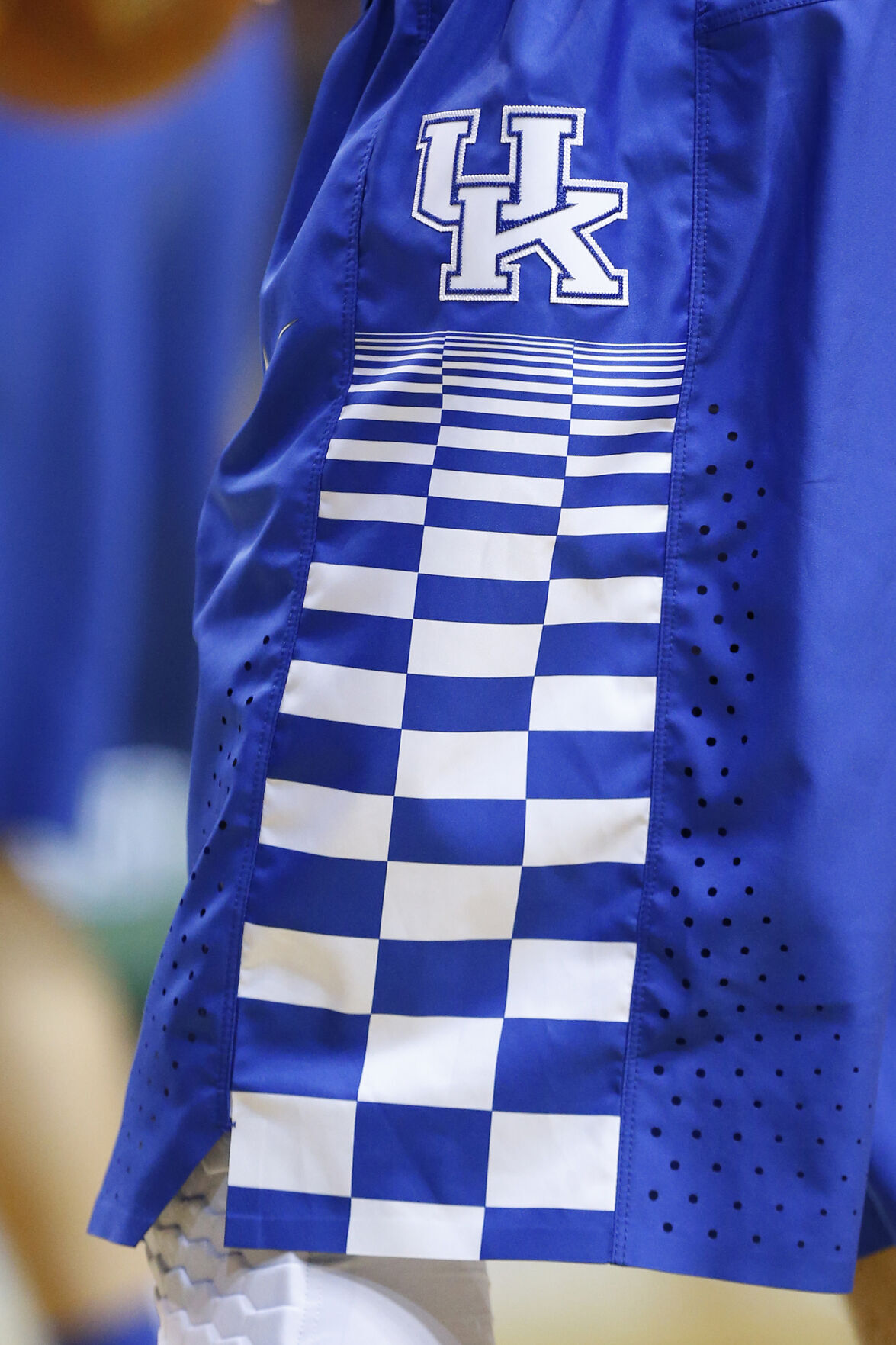 The Kentucky Wildcats logo on a player's shorts prior to a 2015 game against South Florida at the American Airlines Arena in Miami. (Joel Auerbach/Getty Images/TNS)

LEXINGTON, Ky. — It’s been a foregone conclusion for weeks — perhaps even months — but that inevitability doesn’t detract from the importance of this moment in Kentucky basketball recruiting.

Shaedon Sharpe has officially committed to the Wildcats, and it’s difficult to overstate what that means for the future of John Calipari’s program.

Sharpe — a 6-foot-5 shooting guard from Ontario, now entering his senior year at a prep school in Arizona — officially announced his commitment to the Wildcats on Tuesday night, confirming what has been expected in recruiting circles for a while now.

The super-athletic perimeter player with a rapidly improving skill set landed his Kentucky scholarship offer in December and had emerged as the Cats’ top backcourt target by the summer. Since then, he’s established himself as the No. 1 recruit in the 2022 class.

Following a sensational showing on the Nike circuit during the July evaluation periods, Sharpe was elevated to the No. 1 national ranking by the Rivals.com, ESPN, HoopSeen.com and On3.com recruiting services. 247Sports has not yet updated its 2022 rankings to reflect the summer eval periods, but Branham has told the Herald-Leader that Sharpe will be in the discussion for the No. 1 spot on that list, too.

“Explosive, explosive guard who can really, really score it from all three levels,” he said. “He’s really improved his jumper over the past year. He’s creative off the bounce. He does rely a little bit too heavily on tough, contested pull-up jumpers. But he makes tough shots, too. I do think he will need to be a bit more assertive and aggressive when it comes to attacking the rim and not just settling, and I do think that’s something that you can get out of him. Especially with how gifted of an athlete he is, how strong he is physically. I think he could be a big-time slasher once that’s kind of pushed on him and pulled out of him.

“And the playmaking potential and defensive potential are there. He’s also a really good rebounder for his position. He’s a guy that can come in and be someone that you can get the ball to in late-game, late-clock situations, and he’s going to be able to go get you a bucket.”

Sharpe was clearly one of the standouts on the always competitive Nike circuit this summer, averaging 22.6 points, 5.8 rebounds and 2.7 assists per game and shooting 36.4% from 3-point range.

His production, upside and ability to change games on both ends of the court led the national recruiting services to anoint him the No. 1 prospect in the rising senior class.

For all of Calipari’s recruiting success over the past several years, he has missed on many of his highest-ranked targets. Kentucky landed a player ranked No. 1 by at least one of the major services in three of Calipari’s first four recruiting cycles at UK — John Wall in 2009, Anthony Davis in 2011 and Nerlens Noel in 2012 — but the Wildcats have landed just one such player since then, and that was Skal Labissiere, who committed to the program seven years ago and underwhelmed in his one season at Kentucky.

Labissiere’s ranking in that 2015 class was largely due to his perceived upside as a professional. Sharpe is much more equipped to have an immediate and profound impact on Kentucky’s team from the start of the college season, according to Branham and other recruiting analysts.

“He has the production to back up the tools,” Rivals.com’s Rob Cassidy told the Herald-Leader.

Calipari is not allowed, per NCAA rules, to speak publicly about Sharpe until he officially signs with the Wildcats, which he’ll be permitted to do starting Nov. 10. On Tuesday morning, however, the UK coach held an offseason press conference with local reporters. Following a dreadful 9-16 season, a major shakeup to his coaching staff, and a general reset of sorts to his program, Calipari spoke giddily of the future of Kentucky basketball.

When UK first extended the scholarship offer to Sharpe on Dec. 17, even some who closely follow the Wildcats’ recruiting efforts thought there might have been a mistake or misunderstanding.

At that point, Sharpe was the No. 85 overall prospect in the 2022 class, according to the 247Sports composite rankings. He was coming off a sophomore season — his first in the United States — that saw him relegated to a reserve role for Sunrise Christian (Kan.), perennially one of the nation’s top prep schools.

“At that point in time, he really stood out due to his athleticism,” Branham said. “His skill set wasn’t there, but he was an explosive athlete.”

The spring and summer following that season, Sharpe stayed in the gym. His Nike team director, Dwayne Washington of UPlay Canada, said they spent from March to August working on all aspects of his game away from the basket. They worked on his mid-range attack. They worked on getting to spots on the court. They worked on limiting dribbles. They worked on being prepared to shoot before the opportunity to shoot came. And they, of course, worked on outside shooting itself.

Washington, who had been helping Sharpe along since middle school, knew part of his sophomore struggles were related to the need to acclimate himself to a new country and living away from home. He knew there was plenty to work on, but there was also plenty of promise.

He told then-UK assistant coach Joel Justus, who had recruited another of Washington’s star players, Shai Gilgeous-Alexander, to keep an eye on Sharpe during that summer’s Nike league play. But the COVID-19 pandemic canceled the entirety of the Nike season, and he didn’t get a chance to prove himself to college coaches.

A new school year brought a new high school team: Dream City Christian (Ariz.), a program that played against some of the top talent in the country. Right off the bat, Sharpe blossomed into a star. Not long into the season, Washington reached out again to UK’s coaches, who were still not permitted to see recruits in person due to the NCAA’s COVID-19 restrictions. This time, Washington sent along some game film of Sharpe’s recent performances.

“He has excellent ball skills, and I think a school like Kentucky does better with bigger guards that can playmake and score, i.e. Brandon Knight, Shai, Jamal Murray, the list goes on,” Washington said at the time. He added that Sharpe looked the part, physically, of a star Calipari guard. More importantly, Washington saw a player with the mental makeup to excel at UK.

“It totally makes sense to reach out to people who have proved they would do what they said they were going to with a similar player,” he said. “And then you go from there.”

From there, a scholarship offer came in short order. Calipari had seen enough from the film and heard enough from Washington, who he trusted from his time with Gilgeous-Alexander, to get in on the ground floor of Sharpe’s recruitment.

Washington preached to his budding star that there was still — despite offers from places like Kentucky and Kansas — lots of work to be done. And Sharpe kept honing those skills, especially his abilities away from the basket.

By the time spring rolled around, he was being lauded as a top-10 national recruit, and Washington claimed outside shooting was “probably the best thing he does,” acknowledging that his overwhelming athleticism was right there, as well.

Most impressively, perhaps, was Sharpe’s ability to stay grounded and focused on his development amid his rising profile in the recruiting world.

“He doesn’t even know that he’s doing well,” Washington said this summer. “He has no idea. He just thinks that it’s part of the process.”

Sharpe should find a natural role on Calipari’s team next season.

Kentucky already has a commitment from five-star point guard Skyy Clark, and the Wildcats are expected to land five-star combo guard Cason Wallace in the near future. With some talented guards on the current team projected to return for the 2022-23 campaign, it could make for a crowded backcourt in Lexington.

Sharpe’s size and versatility — along with his reputation as a good rebounder for his position — should allow Calipari to play three guards at the same time, if the UK coach so chooses.

“Standing 6-5, with that athleticism, with that strength — you can play him at the ‘3’ in college,” Branham said, noting that Calipari has had ample success with three-guard lineups in the past.

While Washington has drawn similarities between Sharpe’s approach to getting better and Gilgeous-Alexander’s renowned work ethic, the Nike team director has mentioned both Malik Monk and Jamal Murray as possible on-the-court comparisons for the new UK commitment.

Branham agreed most with the Murray comparison. He acknowledged that Murray’s point guard skills were better at the same stage of development, but he said Sharpe could be expected to show similar skills in time. He also noted that Murray was a better shooter at this stage in his career, but that’s no knock on Sharpe. Murray shot better than 40% from 3-point range in college and remains the most prolific single-season 3-point shooter of the Calipari era (with 113 makes as a freshman, second in program history only to Jodie Meeks’ junior season).

Sharpe, the recruiting analyst says, is a far more explosive athlete than Murray was.

The real comparison is how effective both players were and can be on and off the ball. Murray played that role on a team that also featured Tyler Ulis and Isaiah Briscoe. Sharpe will play alongside Clark, likely Wallace, possibly Sahvir Wheeler and maybe even TyTy Washington.

Like with Murray, whatever role Sharpe finds himself in a year from now, it’s likely to be an impactful one.

“He’s a really tough cover for the opposition,” Branham said. “I’ve talked to some coaches that have gone against him, and they’re like, ‘Man, we have no idea what to do with this kid.’ There are a few of these programs that have said he’s arguably the toughest person that they’ve had to game-plan for, just because he’s so dynamic — he’s just smooth with the basketball. He’s smooth with his movements. He knows how to beat guys off the bounce, get them on his hip and just go get some buckets. Outstanding talent. Outstanding player.”

Athletes you didn't know played in the NCAA Tournament

NFL Futures: Sleepers In the West

NFL Futures: Sleepers In the West

John Calipari the head coach of the Kentucky Wildcats gives instructions to his team against the Vanderbilt Commodores at Rupp Arena on January 05, 2021 in Lexington, Kentucky. (Andy Lyons/Getty Images/TNS)

The Kentucky Wildcats logo on a player's shorts prior to a 2015 game against South Florida at the American Airlines Arena in Miami. (Joel Auerbach/Getty Images/TNS)