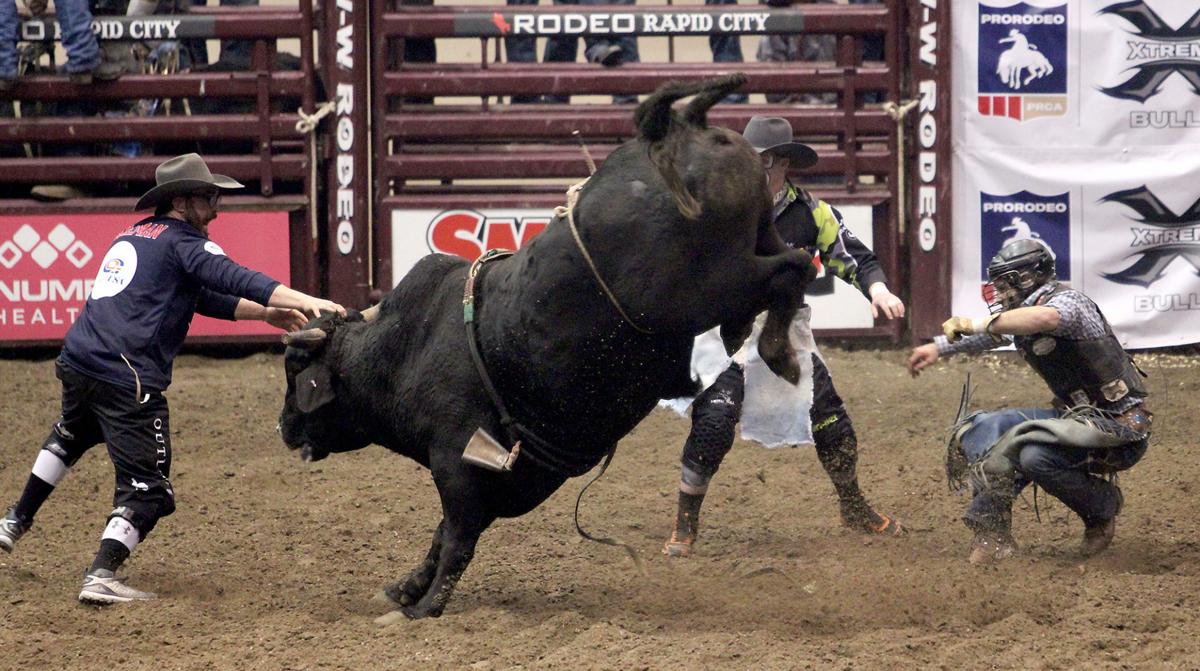 Bullfighter Ezra Klein steps in to save Clayton Savage after Savage cleared his bull Friday night during the Xtreme Bulls at the Rushmore Plaza Civic Center. Savage scored a 69 on his ride. 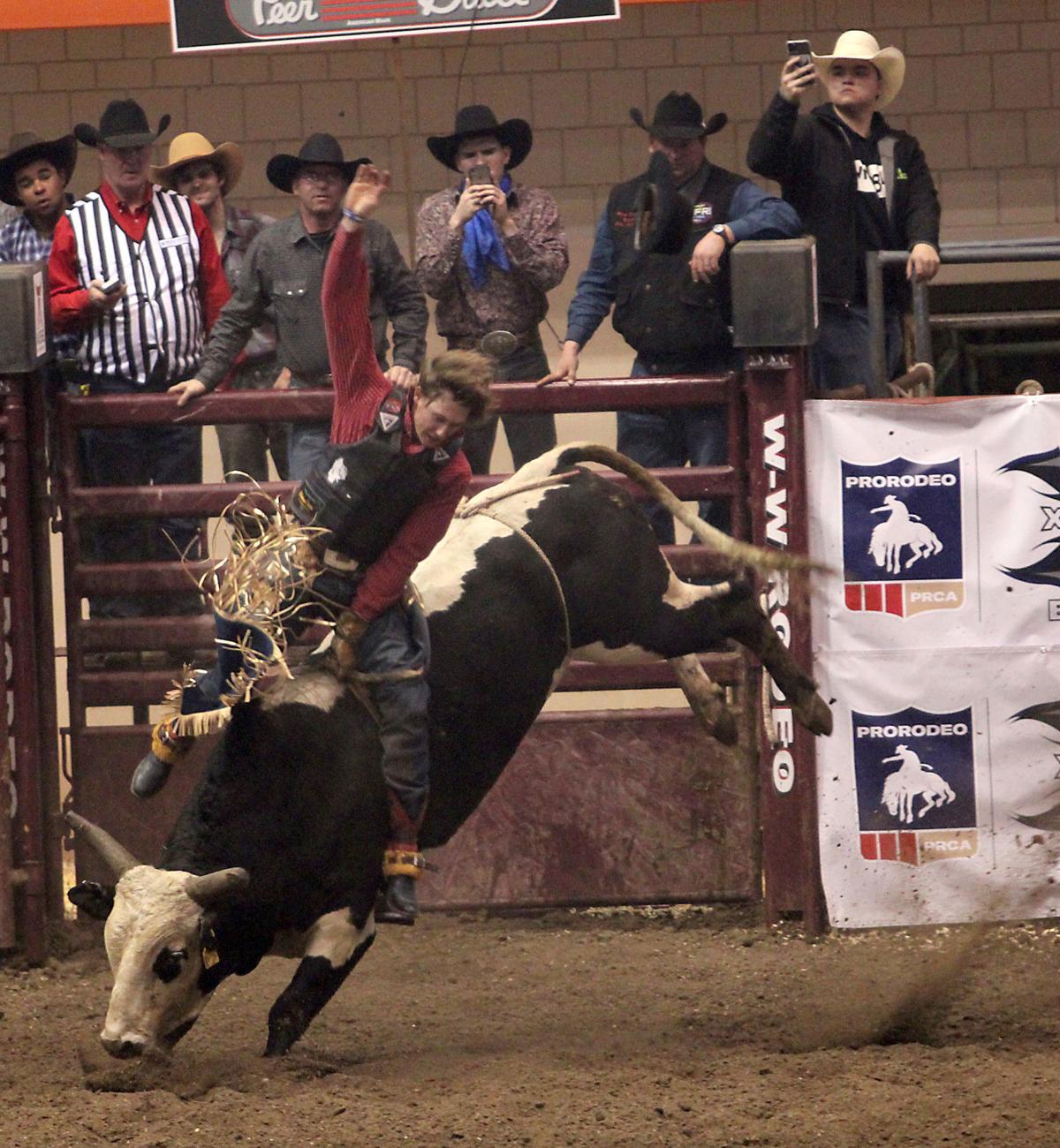 Payton Fitzpatrick from Montana has his hat fly off before he was thrown from his bull Friday night in the Xtreme Bulls event at the Rushmore Plaza Civic Center.

“I didn’t know that bull, but a lot of my buddies did, and they told me he was a good bull, so I was glad to have him,” Pollmeier said “He came right out of the gate and spun left and I fit him really well it felt like.”

Nor was a final feint by Air Technician enough to launch the Fort Scott, Kansas, native into space before the timer flashed eight seconds.

“He kind of sucked back at the end and tried to throw me over his shoulder, but I was able to feel him and get there for a second,” Pollmeier added. “The year hasn’t been going like I like, but I think things are turning around and it’s going to be a pretty strong finish to 2020. I ride again tomorrow in the afternoon perf, and with the ride tonight, I feel pretty good going out tomorrow.”

For Maier, Friday’s solid effort came off a lengthy layoff. And one apparently very good “shake off the rust” ride earlier in the week.

“I’ve only went to the Xtreme in Ft. Worth, and am kind of picking it up now. I took a lot of time off last fall and haven’t been on for about four months. The other day I got on one to get the rust off and today I felt a lot more confident,” said Maier, whose brothers, Ardie and Corey, are professional bull riders as well. “I was just looking for a good ride tonight. Focus on what I’m doing, stay in the middle of him for eight seconds and not try to trap him either way but just let him jump and jump and give it all I had.”

Rapid City’s Tanner Bothwell, 2019 PRCA Rodeo Rapid City winner and a former Xtreme Bulls winner in Rapid, came into the event hoping to stoke up a winter campaign after being idled by injury for much of the 2019 season.

“It’s great to be back after sitting out much of last year,” Bothwell said prior to his trip out of the chutes. “I’ve had a bunch of operations the last few years and I’m looking forward to getting back on a bull and making things happen.”

Unfortunately, the happening wasn’t Friday night as Burch Rodeo’s Highly Suspect got an early jump on him and forced a hasty exit on the former Sturgis high school state wrestling champ.

A couple of the top bull riders on the PRCA circuit were out as well, though Laramie Mosley, the Xtreme Bulls Tour points leader in 2020 Xtreme Bull standings, and Boudreaux Campbell, who finished second in 2019 World Standings after a stellar two-round performance at the NFR in December, stopped the clock short of eight seconds.

Rodeo Rapid City, produced by Sutton Rodeo, continues on Saturday with the first two performances of the PRCA rodeo (1:30 & 7:30 p.m.).

Bullfighter Ezra Klein steps in to save Clayton Savage after Savage cleared his bull Friday night during the Xtreme Bulls at the Rushmore Plaza Civic Center. Savage scored a 69 on his ride.

Payton Fitzpatrick from Montana has his hat fly off before he was thrown from his bull Friday night in the Xtreme Bulls event at the Rushmore Plaza Civic Center.