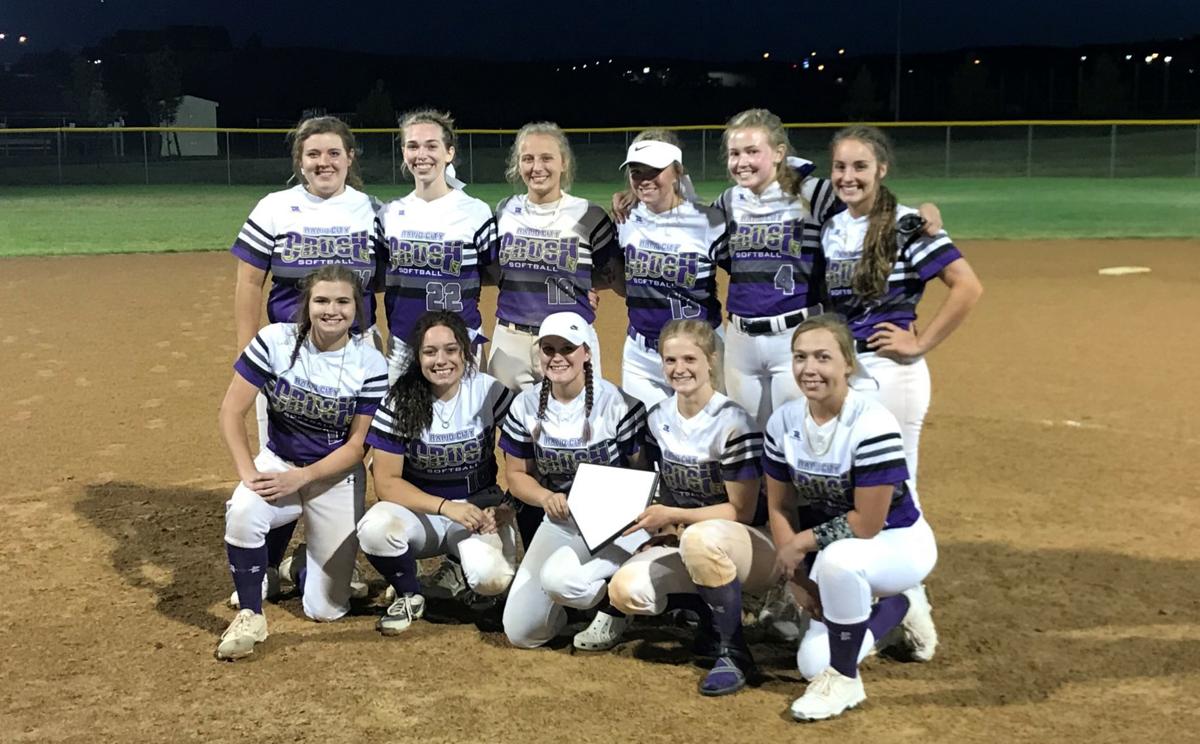 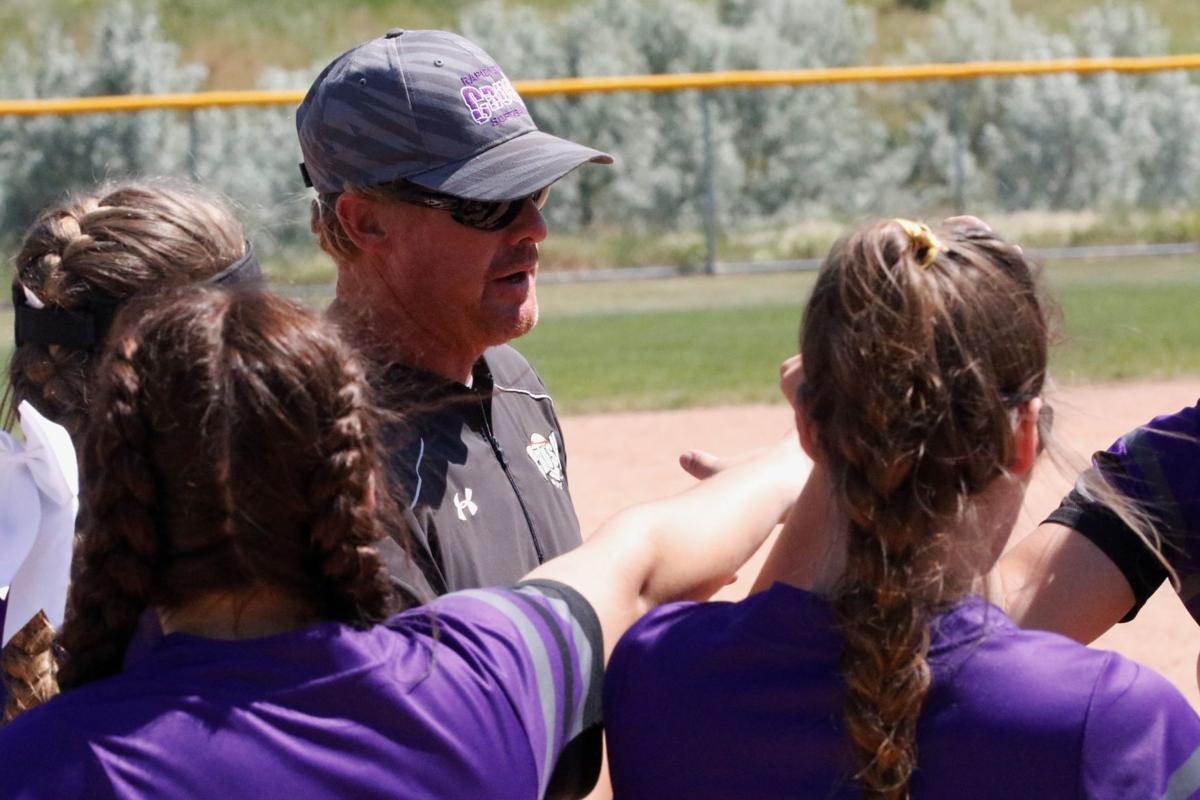 Rapid City Crush 18U softball team head coach Roy England talks to is team Saturday between innings against the Nebraska Domminators during the Mt. Rushmore Classic at Parkview Softball Complex. 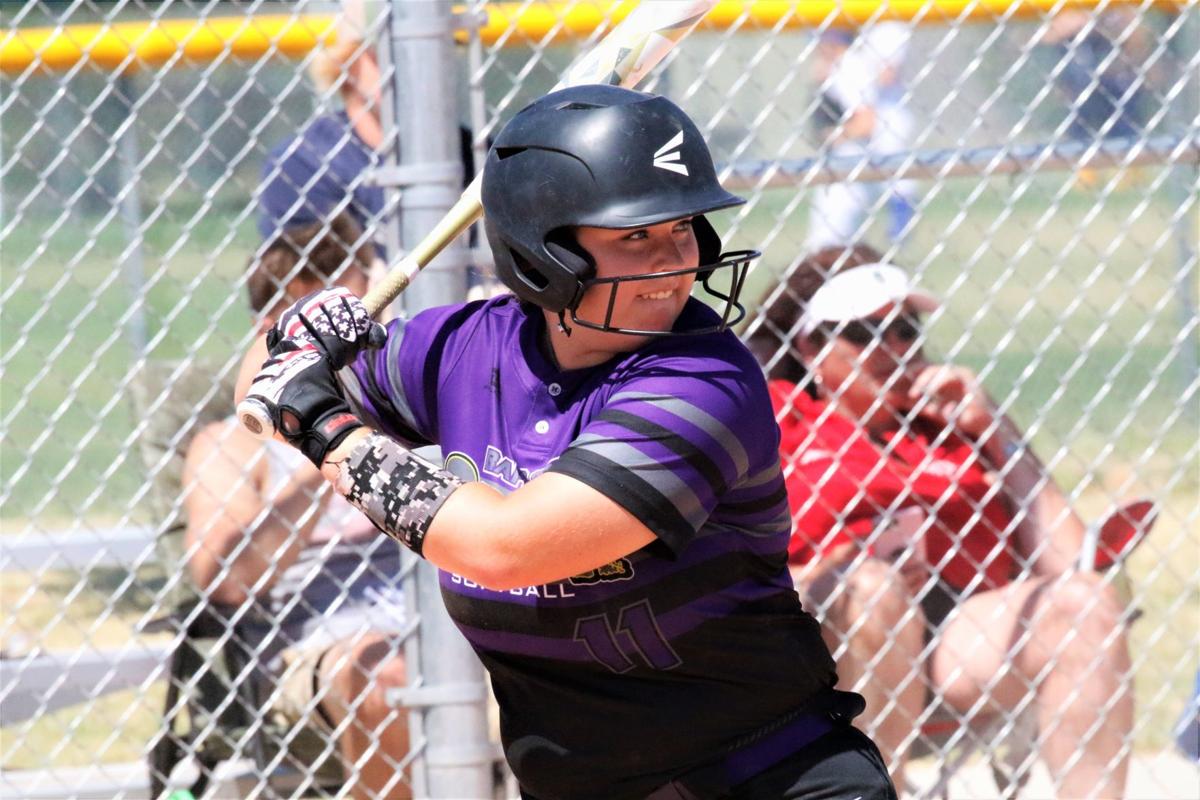 Nora Nelson of the Rapid City Crush 18U softball team waits for the pitch against the Nebraska Domminators Saturday during the Mt. Rushmore Classic at Parkview Softball Complex.

Cruising along after a couple of games in the 25th annual Mt. Rushmore Classic, the Rapid City Crush 18U girls' fastpitch softball team suddenly found itself on the short end of the scoreboard.

The Crush fell to Nc Sting Meza out of Colorado 4-3 Saturday night, but with their strong overall pitching and defense, still went into Sunday's bracket play as the top seed in the Division 1 field.

The Crush went unbeaten Sunday, capturing the title with a 1-0 win over the Minot White team in a game that was called in the fifth inning because of lightning. Officially, the two teams shared the title, but the Rapid City squad nevertheless won its second tournament of the summer season.

Earlier in the tournament, the Crush beat Minot Gold 11-1 and the Nebraska Dominators 6-0. Three teams were 2-1 in their pool, but the Crush allowed just four runs to earn the top seed.

On Sunday, the Crush came back to stop the Dickinson Diamonds 1-0 in seven innings on a one-hitter by Alyssa Burke, Rapid City moved into the title game with a 9-3 win over the Jamestown Outlaws.

For the tournament, the Crush gave up just seven runs in the six games, winning two 1-0 contests. Head coach Roy England said a lot of their play comes down to poise and maturity.

"We've had many games where we've been down and come back in the last inning to win," he said. "For us to be in these tight contests, they held their poise and had confidence. Not only with Alyssa pitching, but with Laina Culberson pitching in a couple of games too that held us in there. It was just amazing to me that these girls have the confidence that, 'Yeah, we have plenty of time, and we'll just do our business.'"

Burke, who has signed to play softball at Dakota Wesleyan, was outstanding on the hill for the Crush, as she allowed just five hits in 26 1/3 innings, one unearned run, 10 walks and 45 strikeouts. She appeared in all six games, starting four.

"Alyssa is a strong pitcher, there is no doubt about it," Roy England said. "I know the batters are out of balance, they don't square up to the ball very well. So you get these bloopers, and our defense had a lot of bloopers that they ran down and caught, plays they executed perfectly."

Dickinson loaded the bases twice on Sunday but did not score.

"All-in-all, the defense stepped up," England said. "When Laina pitches, she throws a lot of ground balls and a lot of pop flies. Defensively, they just don't fall."

Earlier in the season, the Crush, now 19-2, won the Rapid City Invitational. They will also play in the Summer Slam in Rapid City July 18-19 before the state tournament in early August.

This team, which has seven players moving on to college, also won a state title last year in the 16U division.

"The Rushmore Classic brings in a lot of good teams from three different states. The competitive level is high and it brings out the best in our kids," he said. "Winning tournaments are always good, whether it is home or away. Hopefully we'll win another two tournaments and send those kids to college with a little headway."

Hurricane Isaias made life tough on Lance Christensen Jr. of Kyle on Monday as he had to battle through heavy rains Monday during the opening …

Thousands of fans packed the stands a race track in southeastern South Dakota despite a rising number of coronavirus cases in the state.

St Louis series at Detroit off after positive Cards tests

Rapid City Crush 18U softball team head coach Roy England talks to is team Saturday between innings against the Nebraska Domminators during the Mt. Rushmore Classic at Parkview Softball Complex.

Nora Nelson of the Rapid City Crush 18U softball team waits for the pitch against the Nebraska Domminators Saturday during the Mt. Rushmore Classic at Parkview Softball Complex.