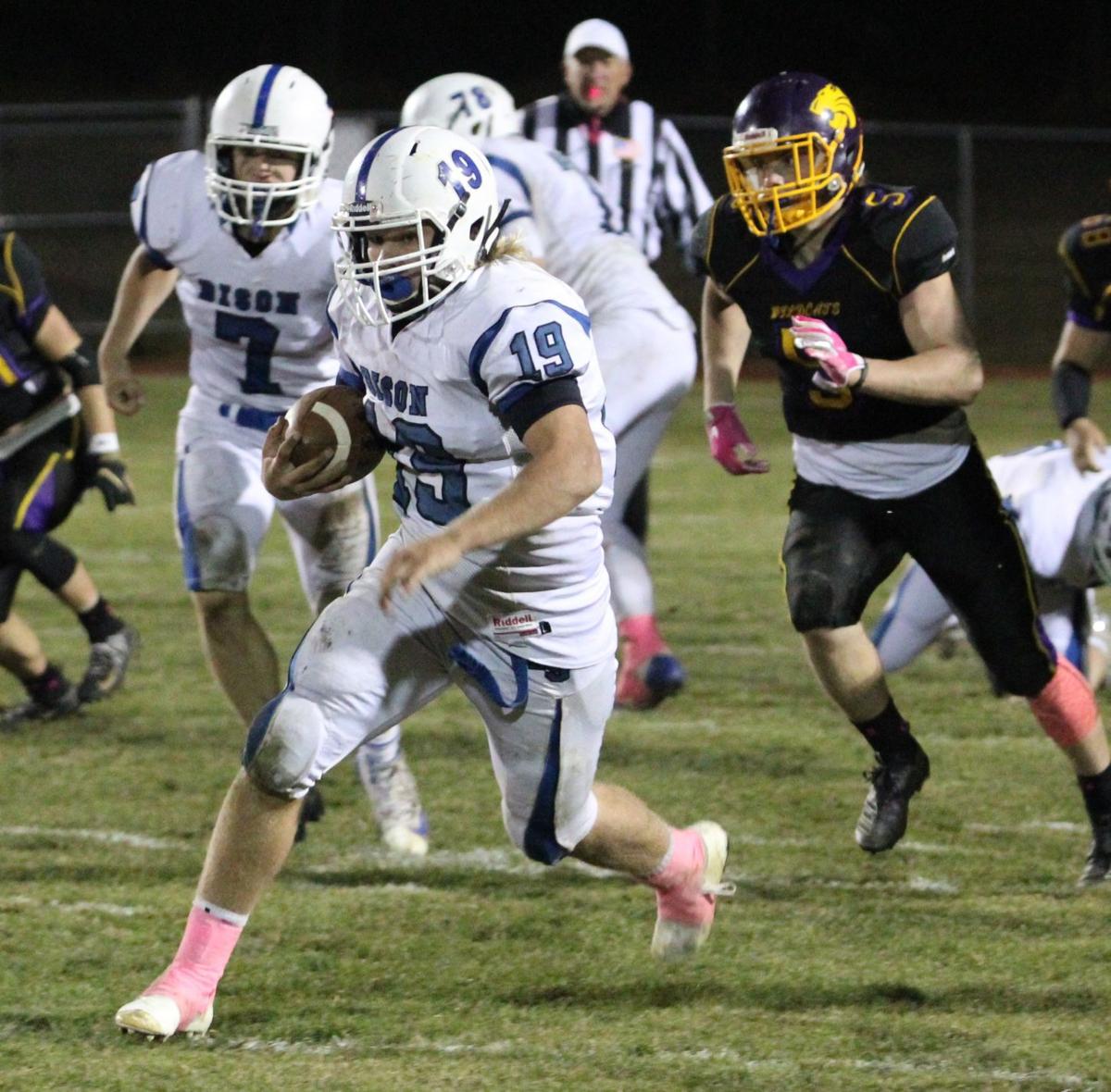 Marcus Harkless of Hot Springs gets some yardage against Custer Friday night in Custer. 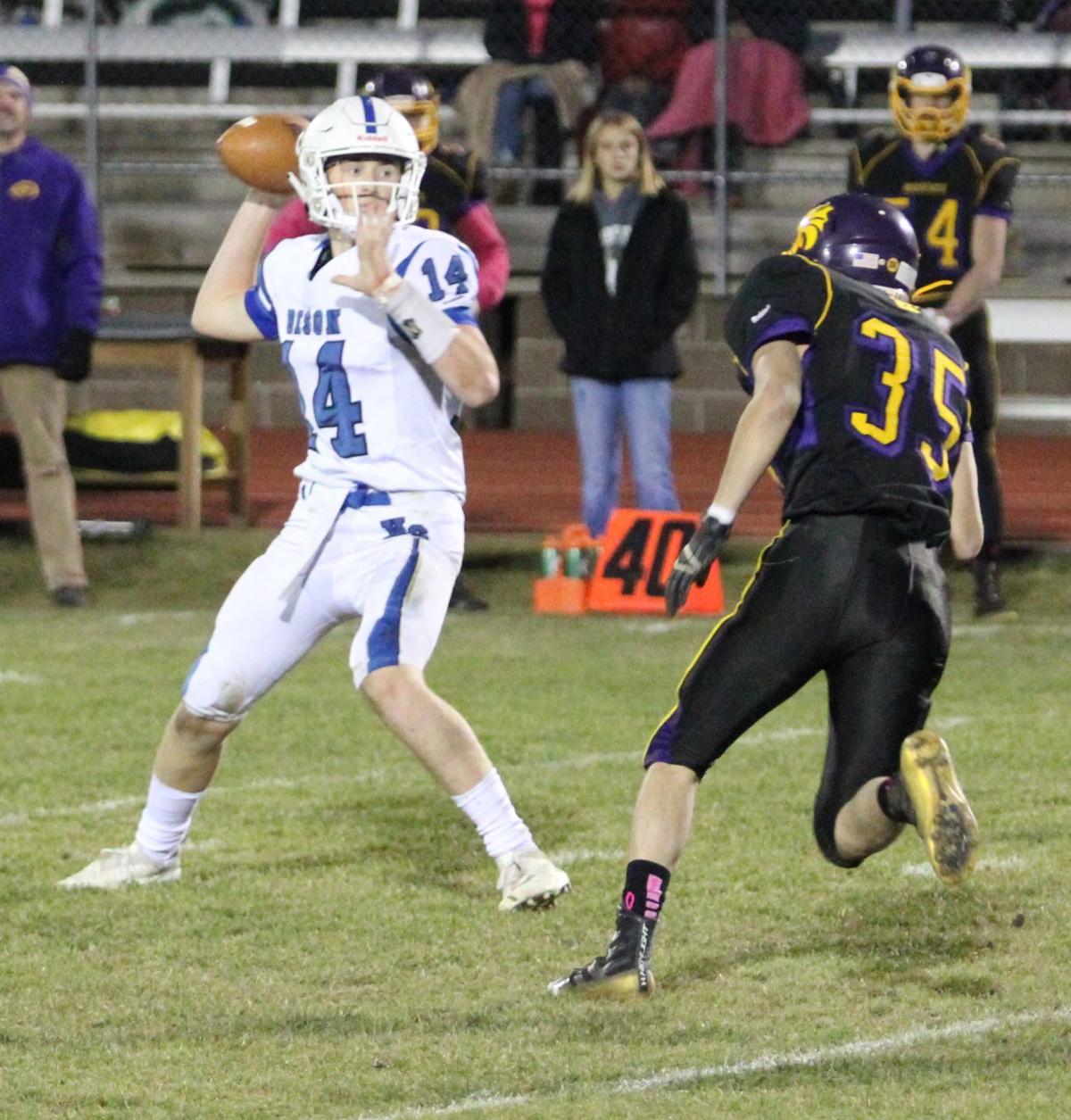 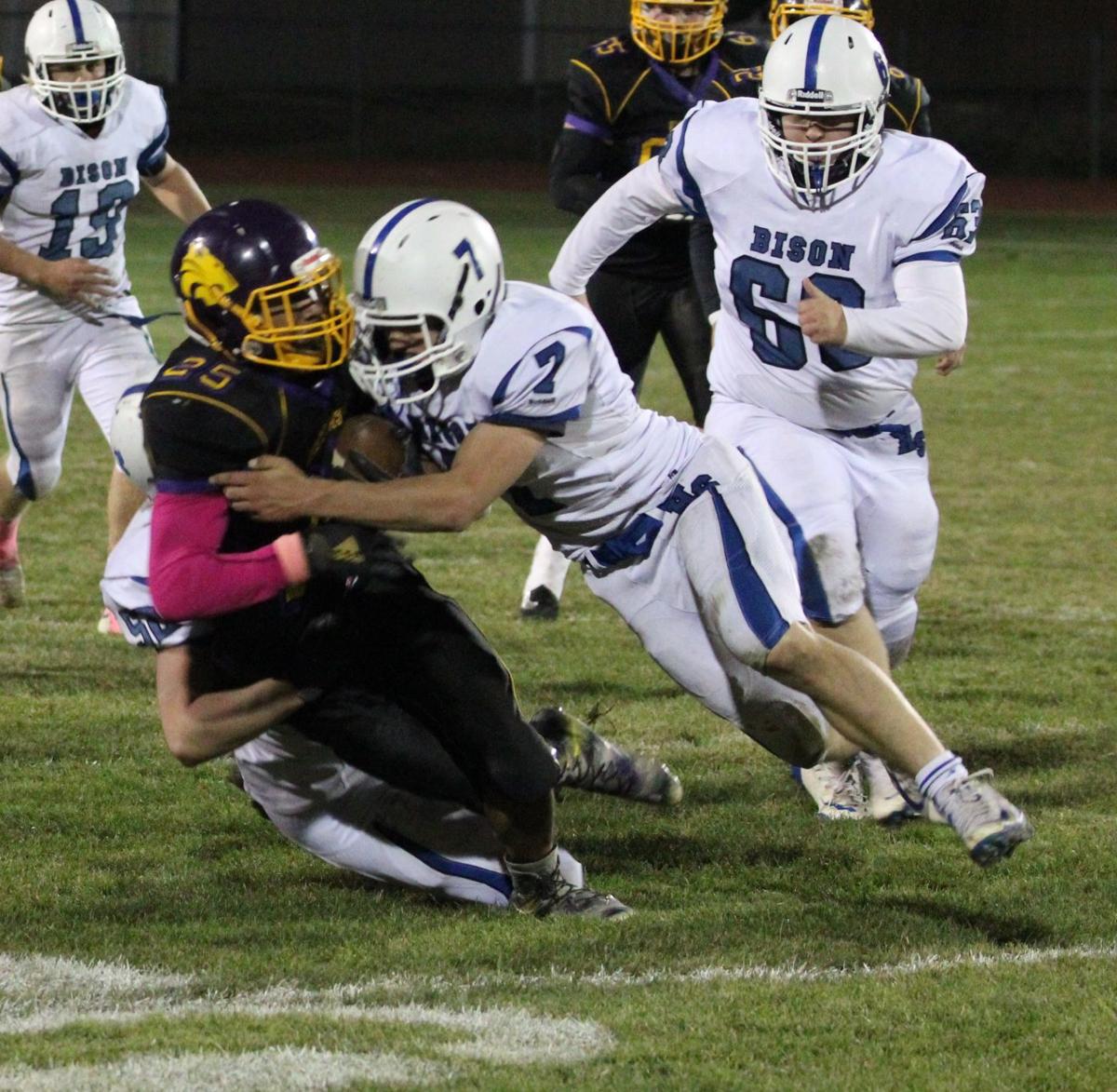 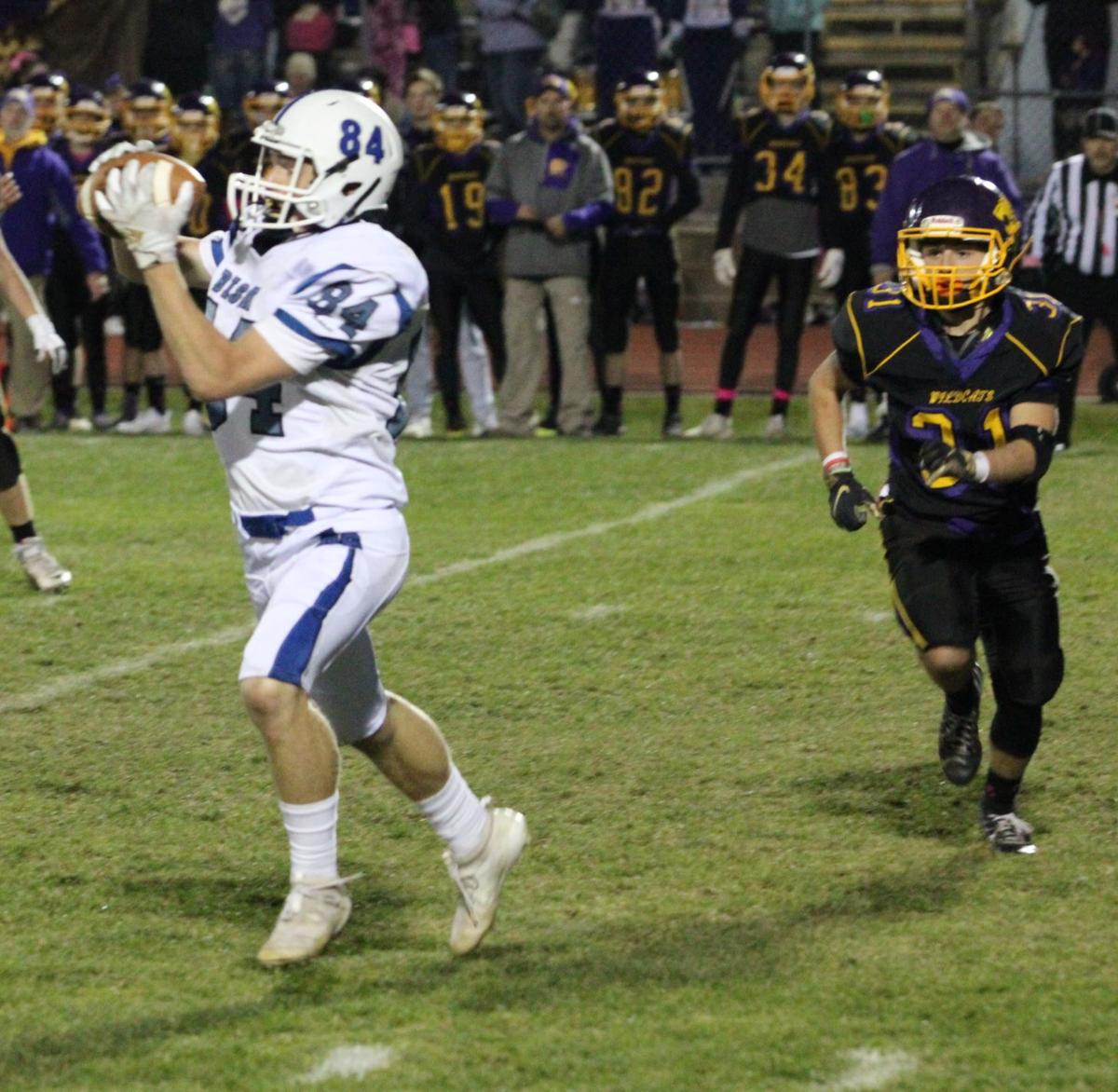 The Hot Springs Bison football team peaked at the right time. It just wasn’t enough to get past Custer.

Even though Hot Springs was disappointed in the loss to a rival, there was some good news that came out of Friday night. The Bison are headed to the playoffs. They had 0.25 more playoff points than Beresford (39.25-39.00). That slight difference sends the Bison on a long road trip Thursday night to take on undefeated Bridgewater-Emery-Ethan.

That news tempered the disappointment of Friday's loss to Custer - who is currently less than a point out of the playoffs with one game against Pine Ridge left.

“The preparation all week in practice was there,” Kramer said. “I am proud of every one of them top to bottom. That’s a really good Custer football team and we gave them all they wanted.”

“We expected them to play well because of the rivalry, but we didn’t expect them to play like that,” Williams said. “Those kids from Hot Springs played hard.”

It looked like the game would be a high scoring affair early on.

The Wildcats struck first, when quarterback Dathon Elmore found Grant Sullivan for 23 yards after a short punt left Custer starting its second drive on the Bison 26. A couple plays later, Daniel Sedlacek pounded it in from the 1-yard line and got Custer on the board. AJ Kortemeyer hit the extra point to make it 7-0.

Custer forced another punt, but this time on first down, Micaiah Grace was hit hard and the ball popped free. Caleb Maciejewski scooped it up and rumbled down to the 1-yard line for Hot Springs. The excitement was short-lived as a penalty brought the ball back to Custer’s 34-yard line to start the possession.

Brynn Thompson dropped back and found Thomas Massa for a long gain. Massa was hit with helmet-to-helmet contact and that penalty set up the Bison with a first and goal.

Thompson went to the air again and found Gavin Heil in the front of the end zone for a touchdown. Maciejewski hit the extra point to tie it at 7-7 with exactly 10 minutes left in the first half.

On the next Wildcat possession, Elmore found Blake Boyster, who sprinted 69-yards down to the 4-yard line. Elmore called his own number on the next play and found the end zone to stretch the lead back to seven at 14-7 with 7:50 left before intermission.

Thompson almost tied it, but his pass for a wide-open Massa was lobbed about six inches too far.

Both teams pounded the ball on the ground in the second half, but neither was able to get a drive into the red zone and the halftime score became the final.

Williams said he didn’t expect a 14-7 result when the night started.

Williams said he wasn’t sure if the win would put his squad in contention for the playoffs, but they have more immediate concerns.

“We are going to work Monday to get ready for Thursday’s game against Pine Ridge,” he said. “A conference championship was one of our goals this year. We want to win out. A lot of things have to happen for us to get in.”

Harkless led the Bison offense with 120 yards rushing on 22 carries. Thompson added 37 yards on 18 carries and Glines had 12 yards on four tries.

Thompson completed 5 of 14 passes for 41 yards and a touchdown. His favorite target was Massa who finished with 2 catches for 22 yards.

On the defensive end for Custer, Sedlacek finished with five tackles and three sacks, Brennan Hanes had 10 tackles and a sack and Dylan Thaut added a pair of tackles and two sacks.

Thompson also led the Bison in tackles with 8. Heil and Wendland combined for five tackles for loss. Wrider Allison added a sack for Hot Springs.

ABERDEEN, Md. (AP) — Vi Ripken, matriarch of the famed Orioles family that includes Hall of Fame son Cal Ripken Jr. and once the victim of a bizarre kidnapping, has died. She was 82.

MIAMI (AP) — Larry Wahl, a vice president of the Orange Bowl and a former New York Yankees media relations head under George Steinbrenner, has died. He was 67.

Reds OF Akiyama returns to camp after wife seriously injured

GOODYEAR, Ariz. (AP) — Cincinnati Reds outfielder Shogo Akiyama returned to spring training after a week away to be with his wife, who was seriously injured when a tree fell on her in a park in Ohio.

CHICAGO (AP) — Infielder Eric Sogard and the Chicago Cubs have agreed to a minor league contract, a person familiar with the situation said on Wednesday.

MESA, Ariz. (AP) — The Cubs finalized an $800,000, one-year contract with reliever Ryan Tepera on Tuesday, a deal that allows him to earn up to $1.75 million, and opened a roster spot by designating right-hander Duane Underwood Jr. for assignment.

SCOTTSDALE, Ariz. (AP) — Diamondbacks starting right fielder Kole Calhoun will have surgery Wednesday on his right knee because of a medial meniscus tear.

SCOTTSDALE, Ariz. (AP) — Reliever Anthony Swarzak agreed to a minor league contract with the Arizona Diamondbacks and will be at major league spring training camp as a non-roster invitee.

Marcus Harkless of Hot Springs gets some yardage against Custer Friday night in Custer.