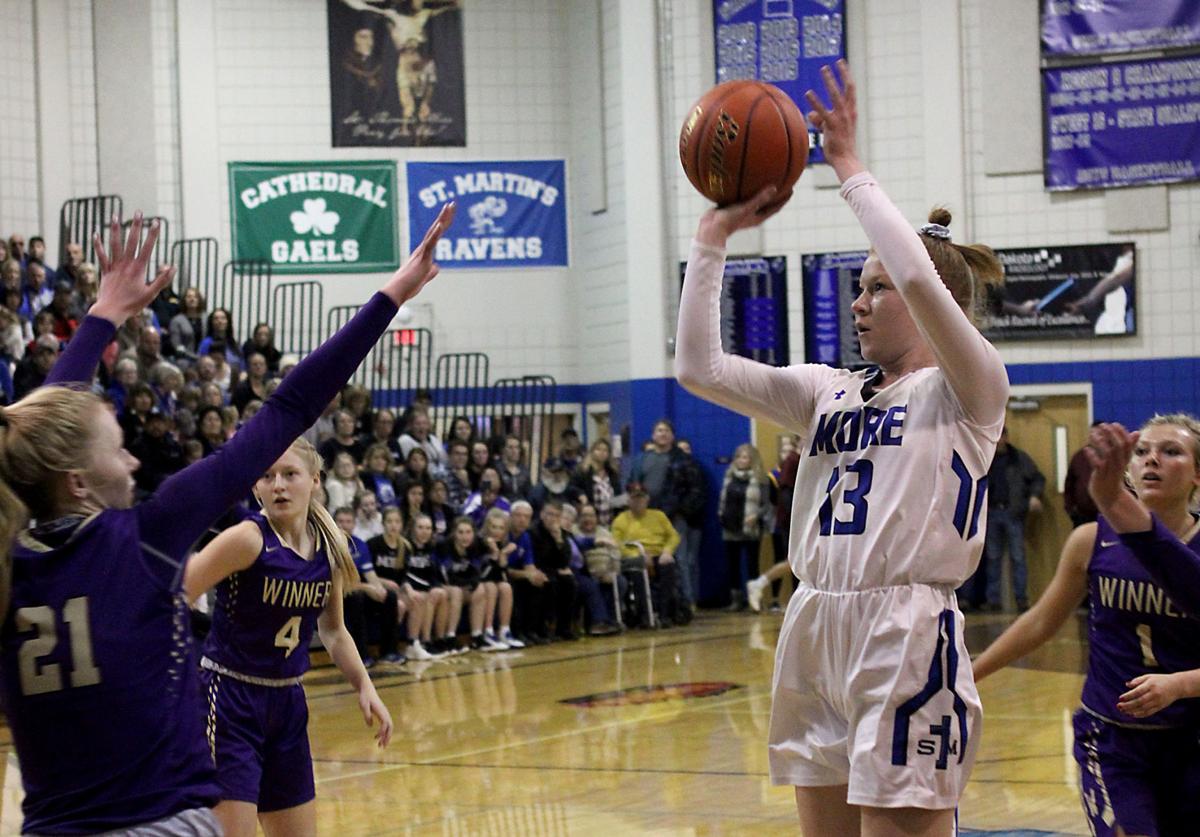 St. Thomas More junior Haleigh Timmer takes a jump shot from the elbow in the first half of Friday night's loss to No. 1 Winner. 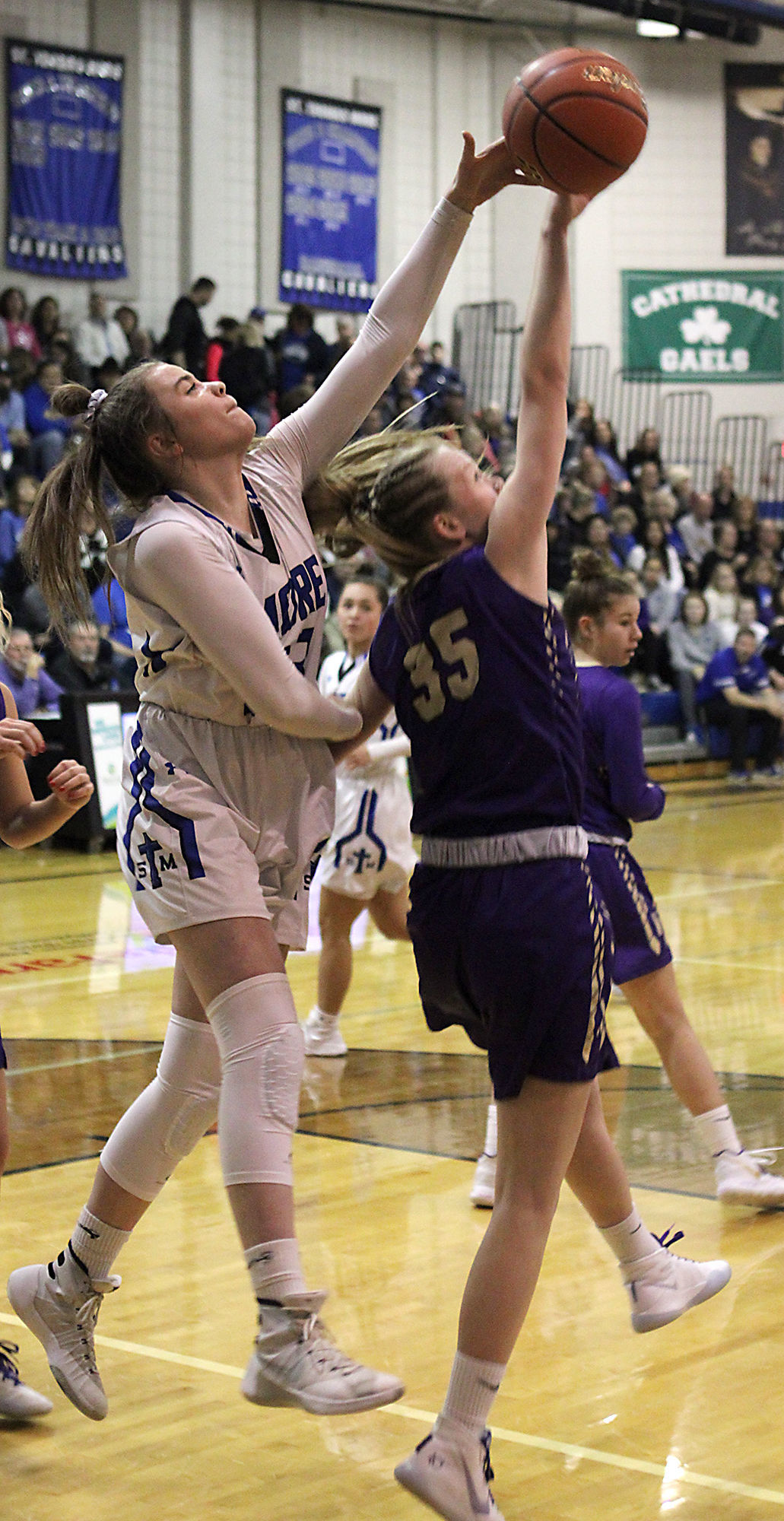 Despite coming into Friday night's matchup at St. Thomas More as the defending Class A state champions and victors of 37 straight games, the Winner girls' basketball team still plays with a little chip on their shoulder.

That was evident in a battle of No. 1 vs. No. 2, which turned out to not be much of a battle at all, as the Warriors rolled past St. Thomas More 54-40 on the Cavaliers home court.

The harassing Winner defense helped put a lid on the St. Thomas More basket in the first half as the Cavs missed their first 17 shots, with the Warriors taking a 10-0 lead into the second and a 22-7 advantage into the locker room at halftime.

"We go back to when they beat us in the state championship games twice (2014, 2016) and it fuels the fire," Winner sophomore Bella Swedlund said. "Once I got up there, I just want to win. We've always been underrated and disrespected. We just want to keep proving ourselves to the state — our town and our subs even."

STM, which had won five straight state titles before Winner broke that streak last season, came into the game No. 2 and 14-0.

"You definitely don't expect to hold them scoreless in a quarter," Winner coach Larry Aaker said. "A little bit was our defense, and a little bit was their cold shooting. Even single digits for a half is really good."

The Cavaliers struggled to get anything going offensively in the first half from inside and outside, hitting just 3-of-25 from the field, while turning the ball over seven times.

"That's a hell of a team," STM coach Brandon Kandolin said of Winner. "They are solid all of the way around. They defend well, they anticipate well, they have length and they have quickness. It's the chemistry of a championship team."

The Cavaliers, who have been hit by the injury bug at times this year, had no answer offensively as leading scorer Haleigh Timmer managed just four points by halftime.

"I think keying on Timmer helped a lot," said Swedlund. "We have a good defense, I feel like, and we have confidence in that."

Kandolin said they have talked about getting more of a scoring mentality and he thinks there is the tendency sometimes to rely on Timmer to do a lot of the work, especially in the half court.

"But that is a tough team to try to press and hold down," he said. "Certainly the other thing we try to thrive on is getting some easy baskets from our own defense, and they didn't allow that."

Winner, behind Swedlund (18 points), Maggie LaCompte (14 points, four 3-pointers) and Kalla Bertram (12 points), built an 18-point lead early in the fourth, even as STM began to warm up.

Sophomore Scarlet Grimshaw hit two 3-pointers in the third for STM and junior Jenna Jacobson added another as the Cavs outscored the Warriors 15-14. But Winner came back to outpoint STM in the fourth, 20-18, even with Timmer breaking loose for 14 of her 18 points.

"The second half we did have more of a scoring mentality, we were more aggressive. We were moving the ball and getting into some gaps, getting some post touches," Kandolin said. "But when you're not shooting well and No. 1 (LaCompte) hit two 3s in a row with a hand in her face and Bella is hitting two in a row, that's tough."

With a free throw in the third quarter, Swedlund hit the 1,000-point mark of her career. She came on to the scene with the Warriors as a 7th grader and missed most of her 8th-grade campaign with an ACL injury. That has made this still early-in-her-career milestone special.

"It's a good moment for me, so I have to cherish it while I can," she said.

The Warriors, meanwhile, will turn around and host Cheyenne-Eagle Butte today as they shoot to build towards postseason play and a shot at their second straight state title.

"The girls have been really prepared, and they still kind of got that chip on their shoulder," Aaker said. "They're still out to prove that we are the defending champions, and that is our ultimate goal, as always."

Kandolin said there is no slowing down for his team as well, as the Cavs welcome the good competition to figure out what they need to work on as they get ready for postseason play. They'll be at Red Cloud Thursday.

"You need this game, and it is the right time to have it because going into this homestretch for us, it is not going to get any easier," he said. "We have a Red Cloud team that is really, really solid, and a couple games in between, and then we end up with Yankton and Brandon Valley."

St. Thomas More junior Haleigh Timmer takes a jump shot from the elbow in the first half of Friday night's loss to No. 1 Winner.