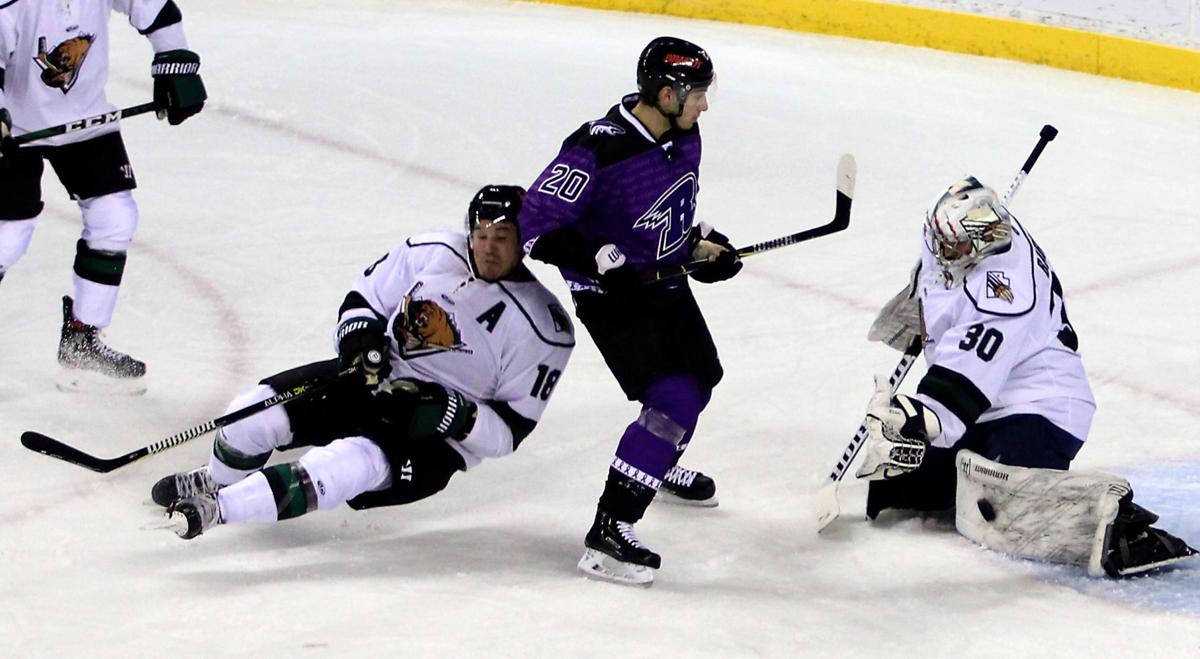 Rapid City forward Brennan Saulnier powers through the defense to get off a shot that was was saved at the last second in the first period Saturday night. Utah went on the win the ECHL game, 3-0, to stop the Rush's win streak at nine games. 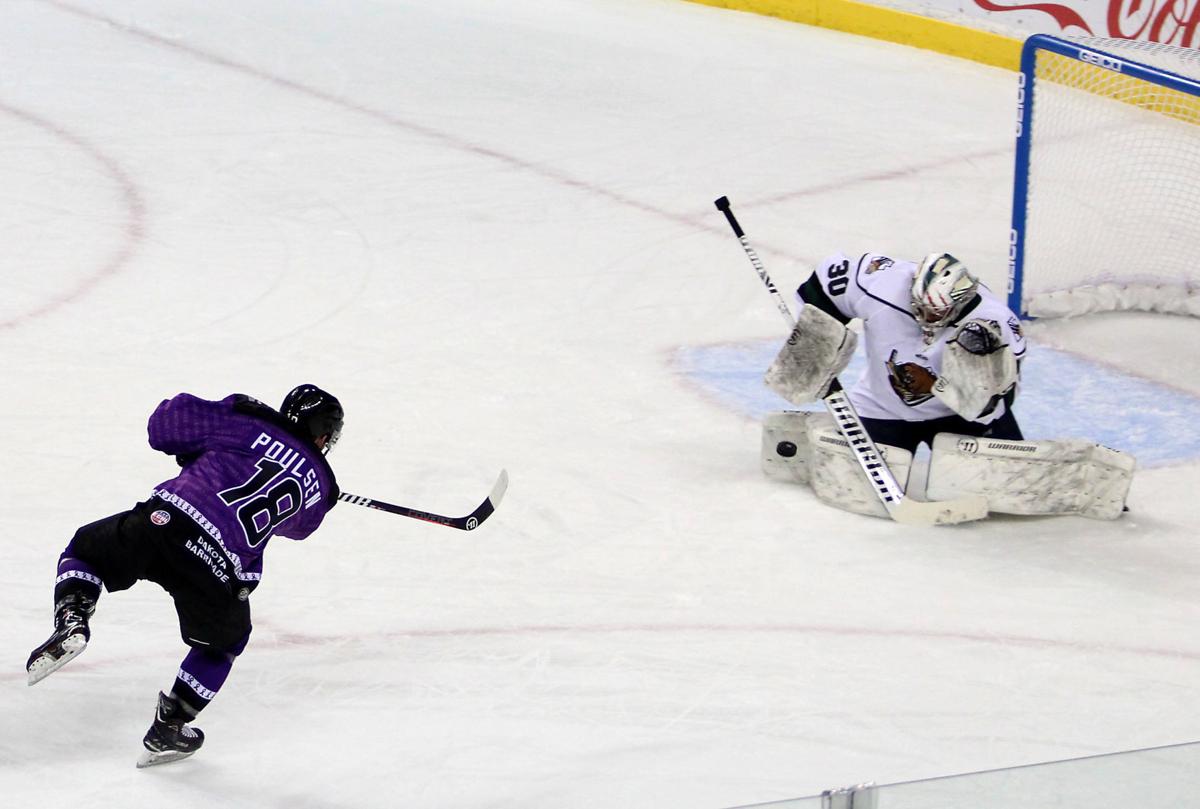 Rush forward Tyler Poulsen slaps a shot on a breakaway in the first period Saturday night. 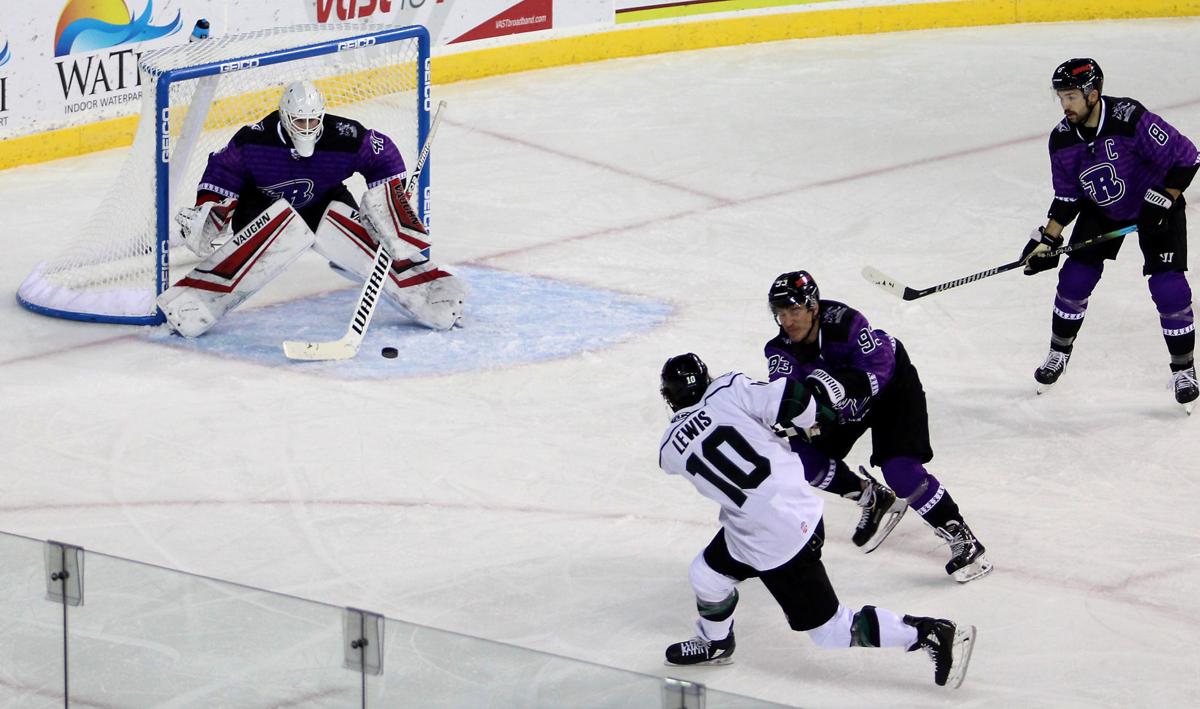 Rapid City Rush forward Dexter Dancs throws down the gloves as the second fight of the first quarter gets going.

The law of averages finally caught up to Rapid City as the team’s nine-game home winning streak slid off the rails on Saturday night, as the Rush dropped a 3-0 decision to the Utah Grizzlies on “Hockey N’ Hope” cancer awareness night at the Rushmore Plaza Civic Center's Ice Arena.

The first period set the tone for the night, as Utah understandably came out aggressively after having lost four games in a row to the Rush. As might also be expected when bodies are bouncing off the boards, chippiness resulted and fighting ensued. Twice within a 32-second span, center ice cleared while players paired off with fists flying. Taylor Crunk and Tim McGauley faced off in the first encounter, and Dexter Dancs and Felix Lauzon followed up for the Rush and Grizzlies, respectively.

No damage done, other than egos perhaps and though both teams had a couple of power play opportunities—including a fifty-four second carryover of a Utah power play to the second period--the first period ended with a pair of zeroes on the board.

The bounces that have perhaps been going Rapid City’s way recently clearly did not early in the second period. As Utah worked the puck along the end boards, Rush defenseman Ryker Killins attempted to clear the puck and the attempt ricocheted off McGauley into the net to put the Grizzlies up 1-0.

“It was that kind of night when nothing was going our way,” Rush coach Danny Tetrault said. “That happens during a long season, and now we just have to bounce back and start another winning streak on Wednesday night.”

The second period damage could have been much worse, as the Rush penalty kill unit was called upon twice within a two-minute span in the middle of the period, with penalties to Killins and Stephane Legault. Again, loose pucks kept rebounding onto Utah sticks though stellar work between the posts by Tyler Parks, who had 23 saves on the night, kept the grizzlies from expanding the 1-0 advantage despite out-shooting the Rush 17-7 in the period.

Though trailing after two periods hasn’t been a death knell for the Rush this season as exemplified in Friday night’s 5-4 overtime win. However, hopes of a possible Rush comeback took a big hit with 13:02 remaining. The goal came on a Utah power play chance after Gabe Torrel was whistled off the ice on a slashing call. And quickly as Utah forward Joe Wegwerth lit the lamp 16 seconds later with a back-hander off a rebound.

Down 2-0 and with tempers on edge, any chance of a Rush comeback fell victim to a couple of penalties down the stretch that prevented a chance to create offensive chances.

“Because of all the penalties there wasn’t any flow to the game tonight, And we did get frustrated and that contributed to the game kind of getting out of hand.”

With time running out, the Rush pulled Parks for an extra attacker with two minutes remaining and Utah quickly capitalized with Brandon Saigeon finding the empty net to close out the 3-0 Utah win.

Utah goalie Brad Barone, a former Rapid City net-minder, recorded 24 saves on the night as the Rush suffered their first shutout of the season while Rush goalie Parks stopped 23 of 25 shots in suffering his second loss of the season.

The Rush were without center Giovanni Fiore, the ECHL’s third-leading scorer who had to sit out a one-game suspension following a game misconduct penalty on Friday night.

“We missed Gio for sure. He’s one of the top scorers in the league but we just couldn’t get anything going offensively,” Tetrault said. “The penalties and the constant stoppages of play didn’t help, but we just couldn’t find any rhythm tonight. And their goal tender had a great night as well. The streak was a good run when we had it, and now we need to regroup on Monday and have a good practice and get ready for Wednesday night.”

Rapid City (15-6-3-0) remain at home next week hosting the Wheeling Whalers on Wednesday, Friday and Saturday nights (7:05 each night).

Rapid City forward Brennan Saulnier powers through the defense to get off a shot that was was saved at the last second in the first period Saturday night. Utah went on the win the ECHL game, 3-0, to stop the Rush's win streak at nine games.

Rush forward Tyler Poulsen slaps a shot on a breakaway in the first period Saturday night.

Rapid City Rush forward Dexter Dancs throws down the gloves as the second fight of the first quarter gets going.