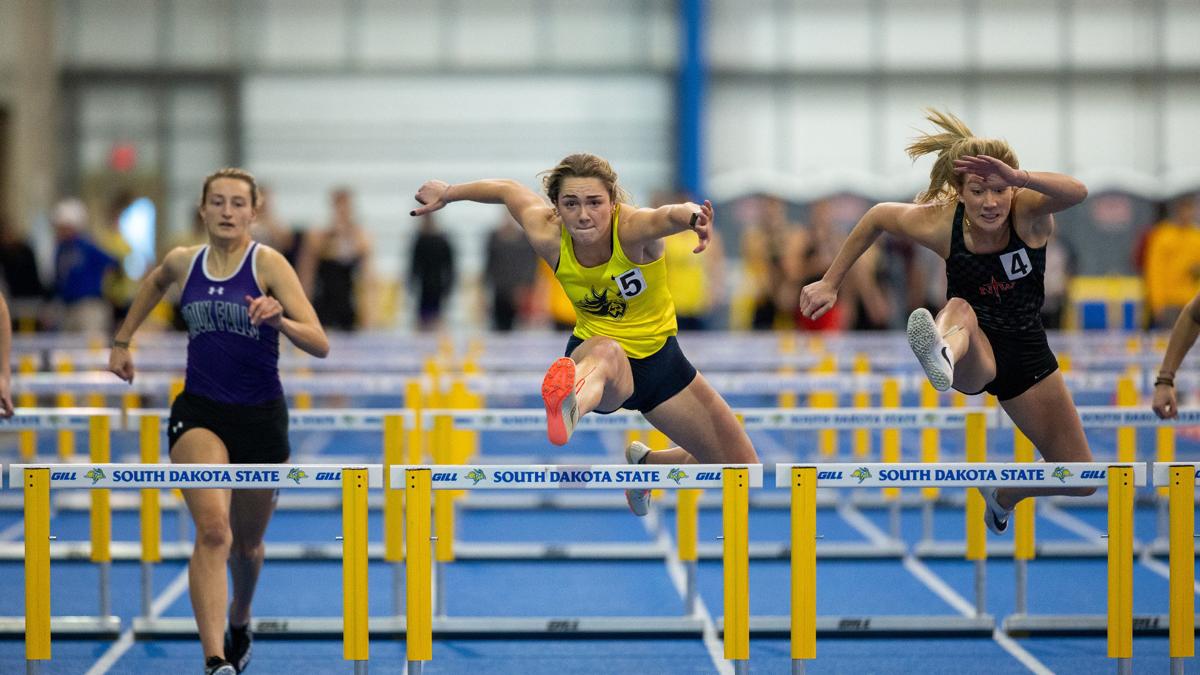 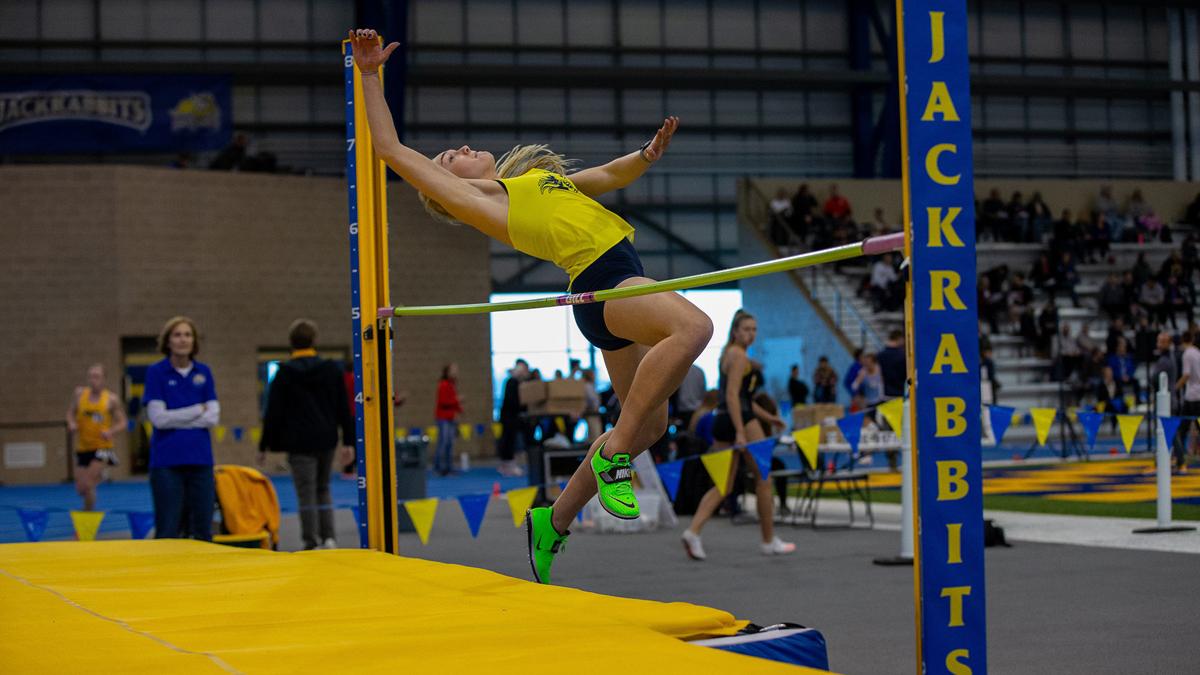 Augustana freshman Elizabeth Schaefer competes in the high jump earlier in the season.

Initially, so was not being able to finish her season right by competing for a national title March 13-14 in Birmingham. Ala.

But like the rest of the country and the world, sports is in an unfortunate shutdown because of the COVID-19 pandemic. Not only was the Division II Indoor Track and Field Championships canceled, so is the rest of the spring outdoor season.

Schaefer won the five-event competition at the NSIC Indoor Championships Feb. 28-29 in Mankato, Minn., with 3,296 points. She went into the meet ranked second in the conference and was rated sixth going into the national meet.

An eight-time state hurdling champion for Rapid City Stevens, Schaefer said she "messed around" and wanted to try a couple other events, so she did the heptathlon in a meet in California.

She fell in love with the multi-events.

"I like focusing on more than just one event — it helps me with nerves and stuff," she said. "In high school I used to get so nervous just focusing on one thing. It helps having a lot going on. If you do bad in one event, then you can make up for it in the next event, rather than it is all on this race and it all comes down to this."

While there wasn't the option of the heptathlon (seven events) or pentathlon in high school, Schaefer said she wished she would have high jumped. She has realized that she is "way better" that she thought she would be.

The South Dakota AA Miss Volleyball after leading the Raiders to the state title in 2018, and also a basketball player, her overall athletic ability plays a part in her success in the multi-events. She also credits her coaches and teammates for the successful transition to multi-events.

"It all started out with Scott Benson (St. Thomas More track coach and personal trainer) here this summer in Rapid helping me with the high jump, especially, and really sparking my interest in it," she said. "Going to Augie and working with other multis, the coaches who have been coaching these awesome multis too, getting their advice and becoming more familiar with the training."

In the indoor season, the pentathlon opens with the 60-meter hurdles, followed by the high jump, shot put, long jump and 800-meter run.

"I'm a mess always after it," she said with a laugh. "I don't think my body is built for that. But I can go a lot faster than that."

At the same time, Schaefer said she has improved immensely in the shot put.

"I remember last summer I threw 29 feet, and at conference I threw 37 feet. I think that goes with coaching and technique," she said. "Our throwing coach has taught me how to use my legs rather than my upper body, since I don't have an upper body."

Schaefer said all-and-all she wants to look at the season on a positive note. She had an outstanding season, winning a conference title, and she said she improved and learned from senior teammate Olivia Montez Brown, the defending Division II national champion.

"She is awesome. It really stinks that we couldn't have competed at nationals together, and I couldn't continue to learn from her that weekend," she said. "But I learned from her all season long. I just need make sure I stay positive about the season rather than not."

At the NSIC meet, Schaefer's triumph in the pentathlon was unexpected, especially with her win over her teammate. At the same time, she said that Montez Brown pushed her in every event, and that is what helped her win the competition.

Competing at this level, and going into the national meet, it could have gone one of two ways; struggle against the best athletes on the biggest stage or rise to the occasion against those same athletes.

She prefers to think that she would have risen to the occasion.

"I'm really competitive. That is how I was raised basically. At that level, I feel that is where I would do my best, instead of succumbing to the pressure and not doing as well," she said. "With these events, if something doesn't go your way, your points fall. But I definitely have room to improve in the 800, and I was set to stick to someone who was going to run a pace that I wanted to run. I was thinking I could gain points in the 800 in the national meet, but it is all just guessing now."

Like all other students at Augustana, Schaefer, a biology major, is on an extended spring break that also includes classes online until April 14 when they are scheduled to return to campus.

In the meantime, Schaefer said she will use a big hill near her house in Rapid City to train, although she won't be able to put any of it to use until the next indoor season.

The biggest thing for her now, she said, is keeping motivated.

"The first thing you want to say is, 'I don't have a season for another nine months. Why am I doing this now?'" she said. "But I think I need to come at it from the mentality of everything I do now will help me in the future, even if it is really far away."

A future that despite some unexpected obstacles, still looks bright.

MINNEAPOLIS — To fill a glaring hole at wide receiver opened by the departure of Stefon Diggs, the Minnesota Vikings have turned first to Taja…

CSC's Reed moves on to Northern Colorado as assistant

The Spearfish Sasquatch of the Expedition League has announced the hiring of Eli Corbett as their new assistant general manager.

Augustana freshman Elizabeth Schaefer competes in the high jump earlier in the season.