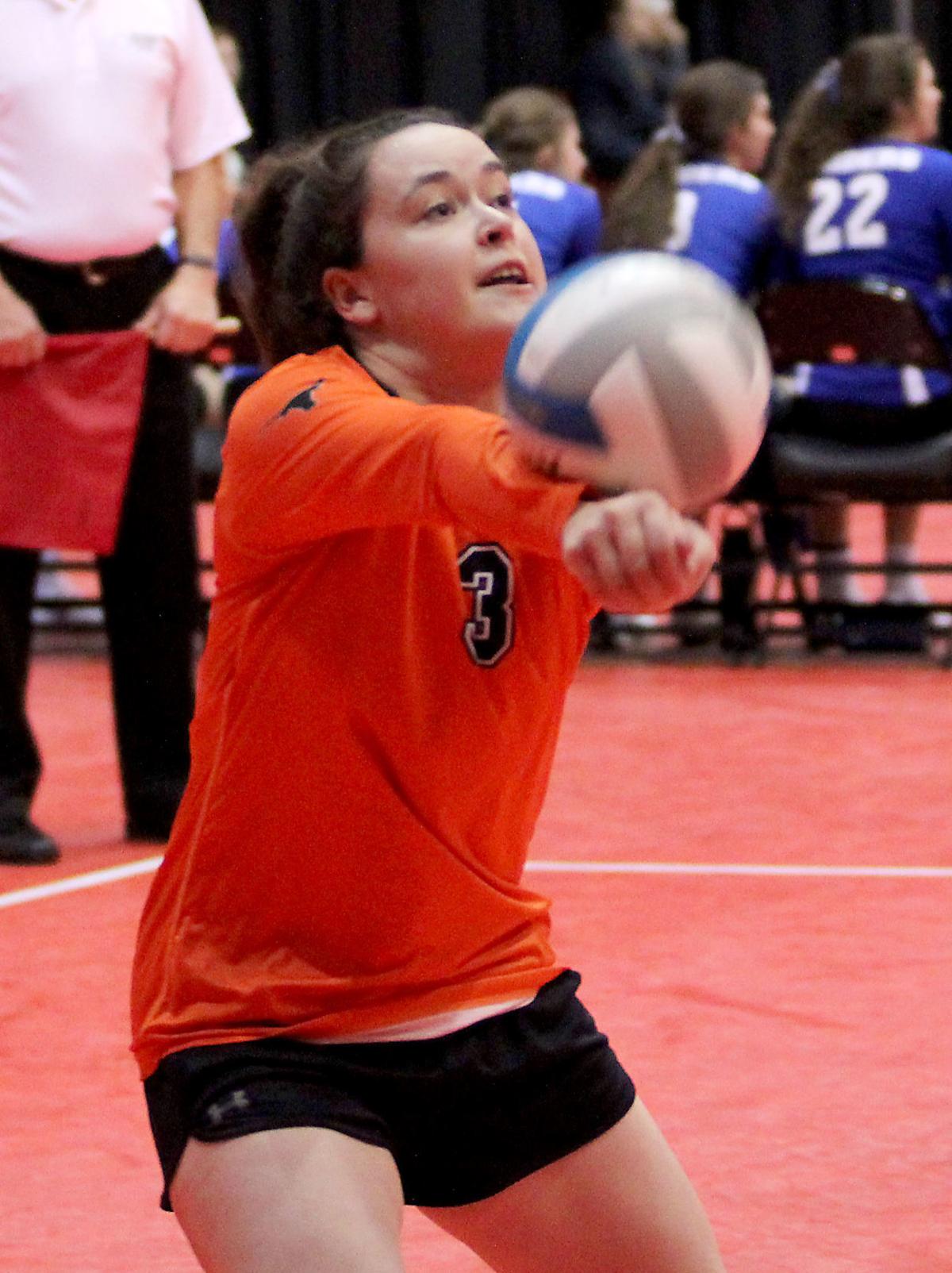 Faith libero Megan Drum plays a ball off of a serve Saturday. 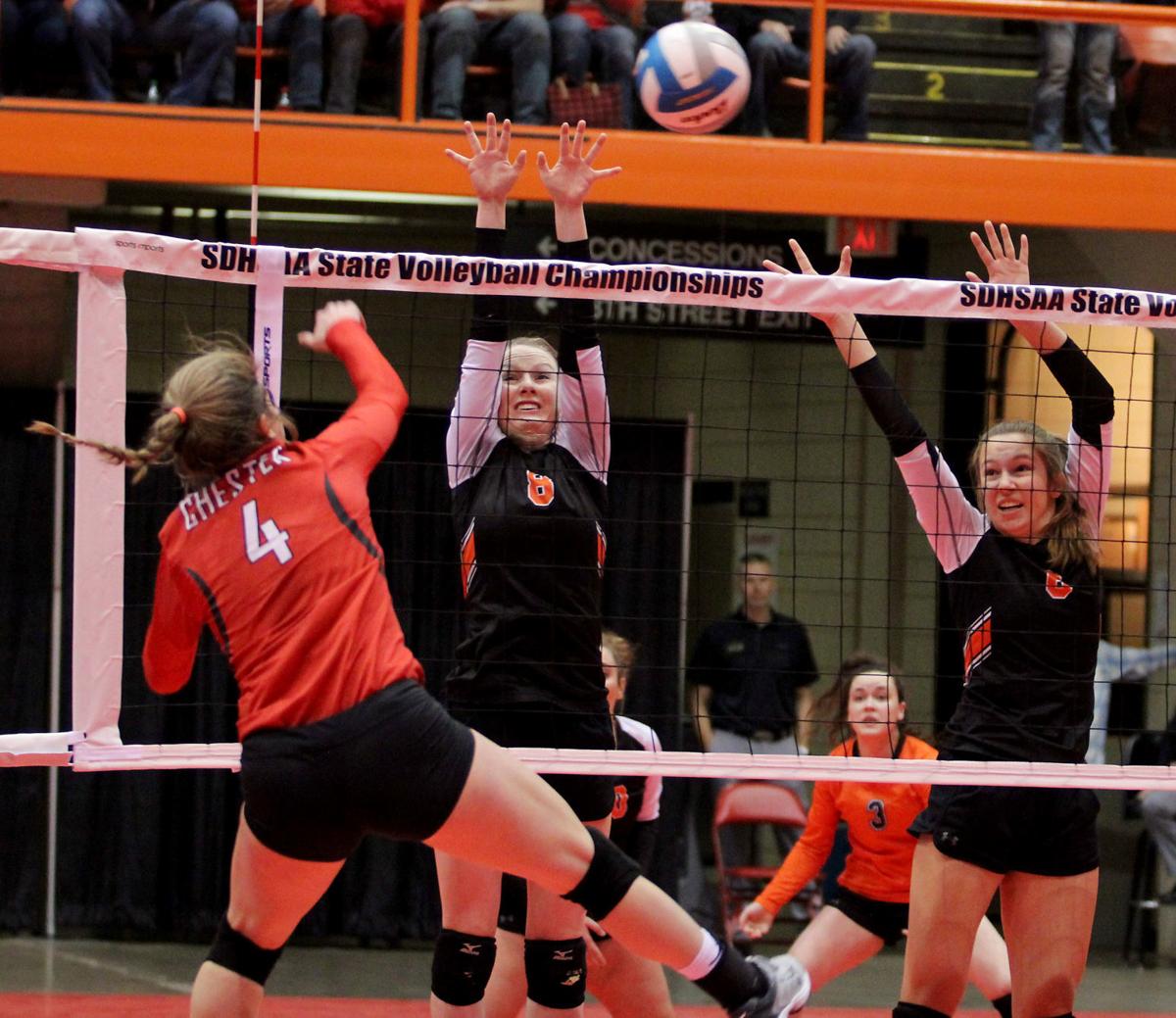 Aeiya Engel (8) and Aiyana Byrd (6) go up for a block against Chester Area in the consolation finals of the 2019 Volleyball State Tournament in Rapid City. Byrd was named to the Class B first team All-State squad.

For seven of the eight teams in the Class B State volleyball tournament this weekend, results failed to meet expectations.

Among the unfortunate seven was Faith High School, as the Lady Longhorns concluded the 2019 volleyball season with a four-set loss, 25-20, 16-25, 25-23, 25-20 to a typically strong Chester Area in the fifth-place Consolation Championship game at the Rushmore Plaza Civic Center.

The fourth-seeded Lady Longhorns came into the contest hoping to wrap up the season on a positive note after the disappointment of a first-round loss to Warner. They had partially accomplished that goal with a Friday consolation round win over Bridgewater-Emery, though Faith coach Mandy Lemmel acknowledged that a residue of disappointment remained from the first-round loss.

“With the big dream of the title gone, we were disappointed and frustrated after the first round,” Faith coach Mandy Lemmel said. “But we did come back yesterday and were able to put something together and were hoping to do better today.”

Ready or not, Chester had the best of the early morning wakeup call contest, slowly separating from Faith following an early 7-7 tie.

In the second set, Faith middle hitter Aiyana Byrd began to amp up the high-powered attack game that allowed the junior to accumulate 73 kills in the tournament as the Lady Longhorns clawed back from an early deficit to capture the set.

The third set proved crucial to Faith’s undoing as a 19-11 lead fell victim to a Chester charge that saw the Flyers draw even at 22-all, and win three of the final four points for a 2-1 lead in sets.

“We came back and won the second set and were up big in the third set and we just let them back in and you can’t do that with someone as talented as Chester,” Lemmel said. “We got to our weakest rotation and that’s always a tough one to get out but I think we probably did get a little complacent and that’s something you can’t do especially at this level. Back home, maybe you can do that a little bit but not at the State tournament.”

In the fourth and final set, Faith hung with the No. 2 seeded Flyers drawing even at 15-all before finally succumbing 25-20.

An easily understandable loss given that the Chester backrow had an impressive 117 digs in the match.

“We really lost the wind in our sails after letting them come back in the third set,” Lemmel said. “We could have, maybe should have that game, and I think it would have been a different story if we had been able to finish in game three.”

Byrd, for the third game in a row, was the dominant player on the floor with 31 kills in the match, most of which were crucial to keeping the Lady Longhorns in the match.

“She is a talented kid,” Lemmel said. “We don’t play teams this strong where we are from so for her to come here and play with some of the best and hang right with them and dominate at times was impressive. I’m also proud of Ariah Engel (10 kills), my outside. She had a phenomenal state tournament and played great today, too.”

Sydney Schauer had 39 assists and 20 digs for Faith while Chester was led by McKenna Larson (16 kills) and Jayda Kenyon (15) along with Kenna Brown (45 assists).

With the sixth place finish, Faith closed out the season with a 31-5 record.

Faith libero Megan Drum plays a ball off of a serve Saturday.

Aeiya Engel (8) and Aiyana Byrd (6) go up for a block against Chester Area in the consolation finals of the 2019 Volleyball State Tournament in Rapid City. Byrd was named to the Class B first team All-State squad.