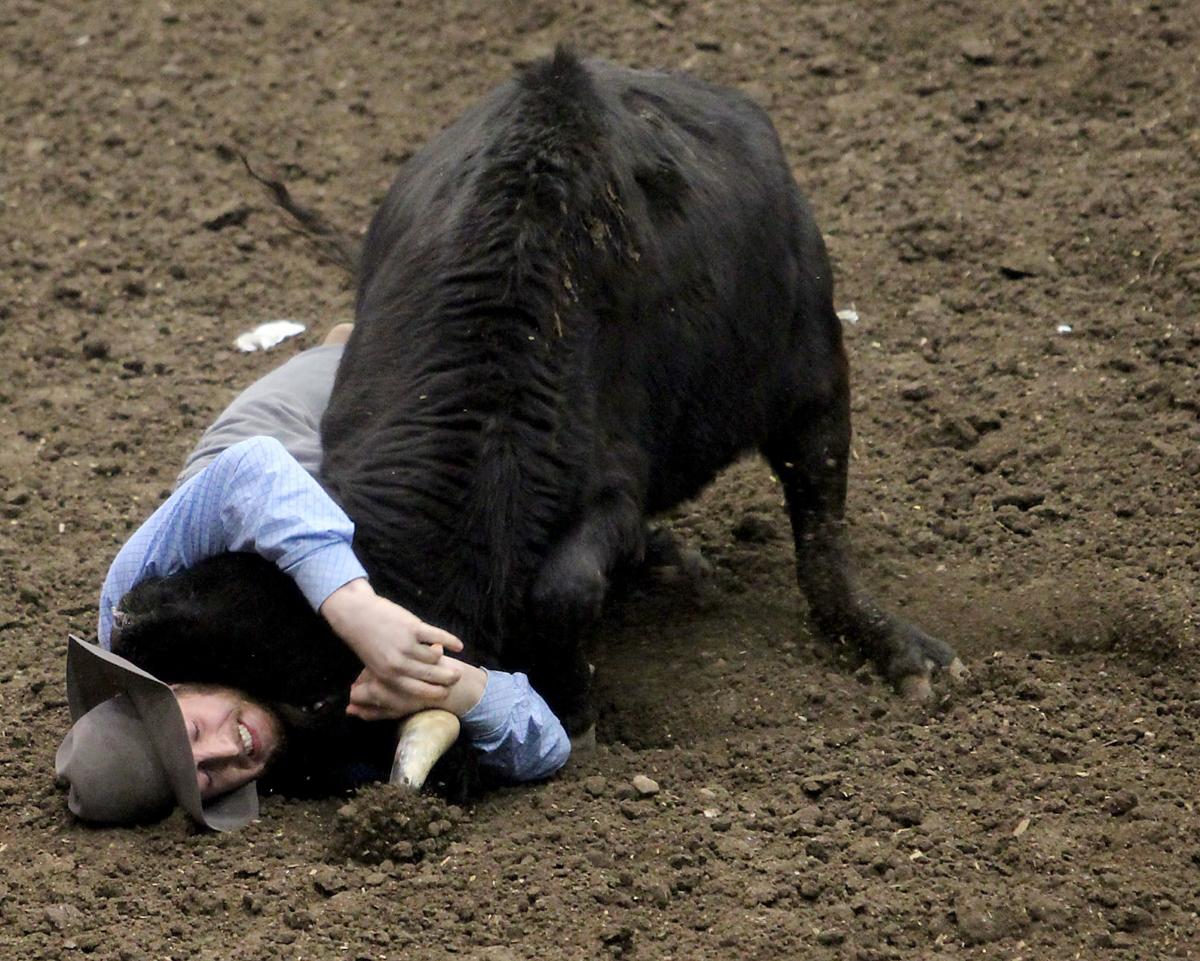 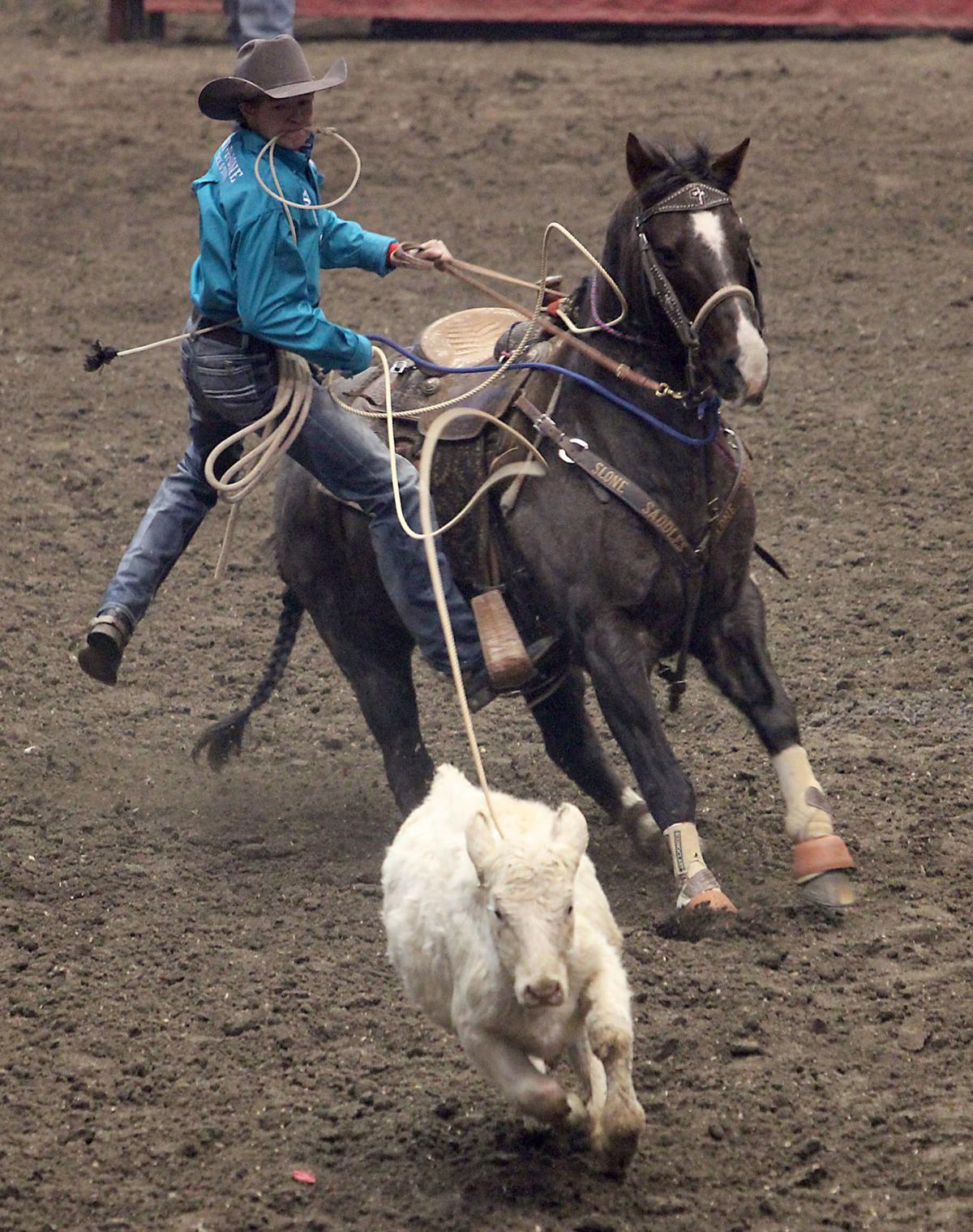 Tyler Boxleitner of Loveland, Colo., dismounts his horse and ties down this white calf in a  time of 12.6 seconds Friday night at the PRCA Rodeo Rapid City presented by Stton Rodeo. 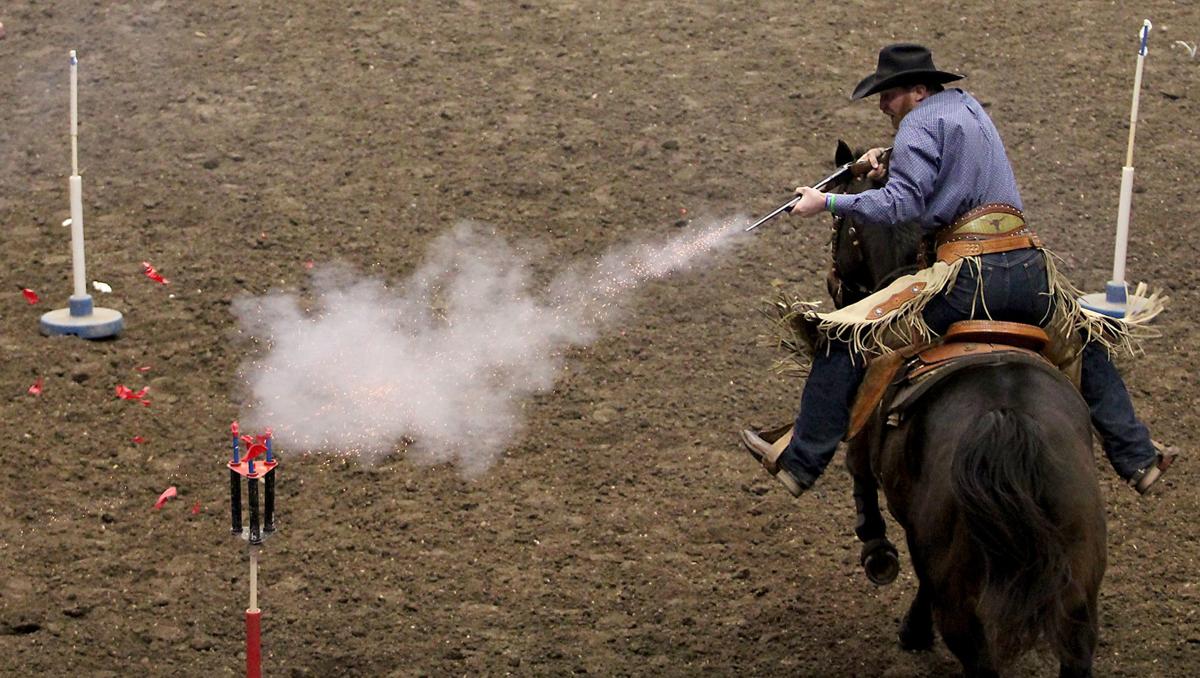 An exuberant crowd ready to celebrate the end of the work week in rodeo style was treated to an impressive display by the timed event cowboys and cowgirls at the fourth performance of Rodeo Rapid City Friday night at the Rushmore Plaza Civic Center.

The feel-good story of the night clearly belonged to Grann, who reuniting with her long-time barrel racing horse, Delphinus, chased the cans in a blazing 12.38 seconds to move into the top spot of the barrel racing leaderboard.

“Actually, that the first time we’ve competed in about a year and a half. He’s been hurt and I’ve been down in Texas working and competing,” said Grann, a former Dickinson State University standout and National College champion. “My sister had been taking care of him and working with him, and I just flew up last night to ride, and I’m amazed at how it worked out.”

Treeby, a former South Dakota State rodeo competitor, drew an ideal steer for a quick run and made the most of the opportunity with an 8.9-second tie-down roping effort.

“I knew the steer would come out slow and game-planned my time at the barrier with that in mind,” said Treeby, whose brother, Wyatt, competed in college rodeo for Glen Lammers at Black Hills State. “I haven’t been out much this year, my third time I think, so it’s nice to come in here and put together a good run and maybe use this to get the season started right.”

After the first eight team roping tandems came up empty in their runs, a couple of Texas/California duos ratcheted up the excitement late. Aaron Macy (Post, Texas) and Jason Johe (San Luis Obispo, Calif.) were the first out and stopped the clock in a 4.8-seconds. Clark (Stephenville, Texas) and Cox (Arroyo Grande, Calif.) came out on their heels and better the time with a 4.6-second run.

In steer wrestling, the quickest time of the night, a 4.9 second trip (and a third-place spot on the leaderboard) was posted by Goodland, Kansas, bulldogger Jon Laine Herl, though Newell’s Cyler Dowling drew the biggest cheer from the crowd with a never-say-die attitude. After chasing his hard-running steer deep into the arena, Dowling, after a bit of a struggle, tipped his steer in 9.1-seconds, an effort perhaps not of money making quality but a crowd pleaser nonetheless.

The rough stock cowboys failed to match the lead-changing effort so their timed event rodeo counterparts though a couple of bronc riders did put themselves in position for a possible trip to the pay window.

Tyler Boxleitner of Loveland, Colo., dismounts his horse and ties down this white calf in a  time of 12.6 seconds Friday night at the PRCA Rodeo Rapid City presented by Stton Rodeo.