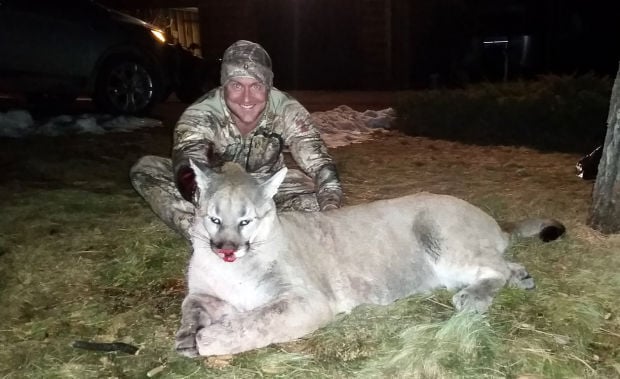 Bill Colson shot this large male mountain lion on Jan. 18 in Pennington County. The animal weighed 132 pounds after it was field dressed bringing the actual weight over 150 pounds. 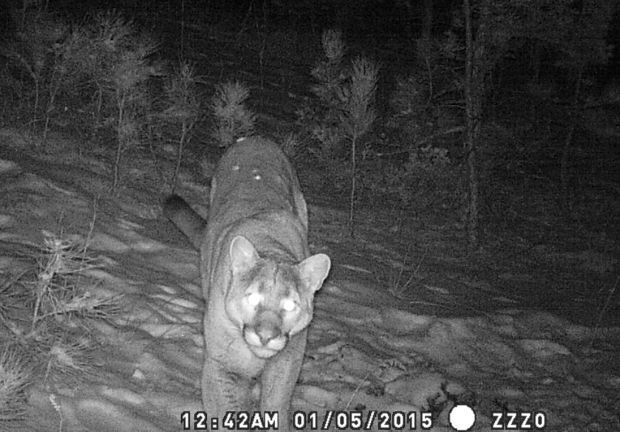 Bill Colson said he had several trail camera photos like this one of the lion he wanted to harvest this season. 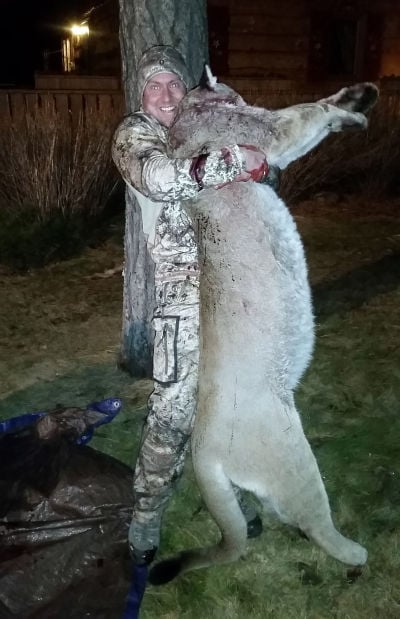 Bill Colson's huge male mountain lion weighed 132 pound after being field dressed. It's real weight is likely between 150 and 170 pounds.

Bowhunter Bill Colson kept still as a statue in his blind for hours every afternoon for two weeks, hoping a large male mountain lion he had tracked for months would come within range of his rifle.

When the big cat finally showed up on Jan. 18, Colson, of Rapid City, was loading gear in his backpack and getting ready to leave.

"I was making a bunch of noises, being loud and wasn’t paying attention and all of a sudden he’s right there," Colson said.

The mountain lion walked directly toward Colson's blind, set up near the spot where the big cat had presumably stashed a recent kill, and turned broadside to the hunter.

"That's when I took him," Colson said. "After sitting there for five hours at a time. It was pretty quick when it happened."

Colson's mountain lion, estimated to be 2-1/2 years old and weighing 132 pounds after field dressing, is one of the larger lions taken in the first month of the 2015 season, which started in the Black Hills Fire Protection District on Dec. 26.

According to the South Dakota Game, Fish & Parks Department, 17 mountain lions, including nine females, had been taken by hunters as of Wednesday. Mountain lions killed averaged 100.5 pounds and 4.5 years of age.

Colson grew up in Spring Creek Canyon and knows the area. The male mountain lion he killed was only about 300 yards from the location where he had killed a female during the 2014 season.

"My parents live out there and I grew up running around the canyons, so I know it really well," he said. "I kind of have the home field advantage."

Colson recalls taking a first shot at the big male last year, while he was hunting the female he eventually killed.

He knew the male was likely still around this year when a large buck deer he had also tracked with game cameras "just vanished."

"I'm pretty sure the lion took that buck, which tend to roam around solo a lot and are an easier target to take than something out of a herd," he said.

Mountain lion numbers for this year's hunt are right on pace with last year, according to John Kanta, GF&P regional wildlife manager.

In 2014, hunters harvested 53 lions, 31 males and 22 females, in both the Black Hills Fire Protection District and Custer State Park.

In past years, the season ended when a prescribed number of female lions had been taken. In 2014, harvest limits were lowered from 100 total lions or 70 females to 75 total lions or 50 females for the season which closes at the end of March.

Colson believes fewer hunters are going after lions and being more selective of the lions they take.

"I think people have realized the guys that would buy a tag and go out and try (to hunt) have kind of given up, so it’s more the die-hard guys that are left, and they are more selective," he said.

Kanta said conditions at the end of December favored hunters as there was plenty of snowfall for tracking. The warmer weather in recent weeks has slowed hunting activity.

"We had a lull about this time last year with not a lot of lions harvested. There's nothing unusual there," he said.

Kanta said the decrease in the mountain lion harvest in recent years reflects a decline in population. Weather conditions and hunter participation affect the number of lions killed as well.

Harvest limits remained the same for the 2014 and 2015 seasons. The maximum of 75 overall lions or 50 females may not change for future seasons.

A misconception is that the harvest limit is a kill quota to be met, he said.

"That’s not the case at all. We call it a harvest limit for a reason. It’s a limit we don’t want to go over for fear that we might overshoot the harvest," he said.

Colson isn't sure about a decline in population. He said he has detected signs, kill sites and food caches of perhaps three different mountain lions in Spring Creek Canyon.

"I don’t think the numbers are down," Colson said. "I definitely saw more cat activity this year than last year. It just might be that area."

The Rapid City Rush announced, in conjunction with the ECHL, the ECHL board of governors and the Professional Hockey Player’s Association have…

Draymond Green may not be playing in the NBA's Disney World bubble, but that hasn't stopped him from being fined during the league's restart. The NBA levied a $50,000 fine on the Warriors forward for comments he made as a TNT analyst Friday, saying Suns guard Devin Booker needs a new home. "It's not good for him. It's not good for his career," Green said. "... They gotta get Book out of ...

Signs ominous and hopeful as college sports hangs in balance

The announcements came within 40 minutes of each other Wednesday morning, one bleak, the other providing a glimmer of hope for a college footb…

Bill Colson shot this large male mountain lion on Jan. 18 in Pennington County. The animal weighed 132 pounds after it was field dressed bringing the actual weight over 150 pounds.

Bill Colson said he had several trail camera photos like this one of the lion he wanted to harvest this season.

Bill Colson's huge male mountain lion weighed 132 pound after being field dressed. It's real weight is likely between 150 and 170 pounds.