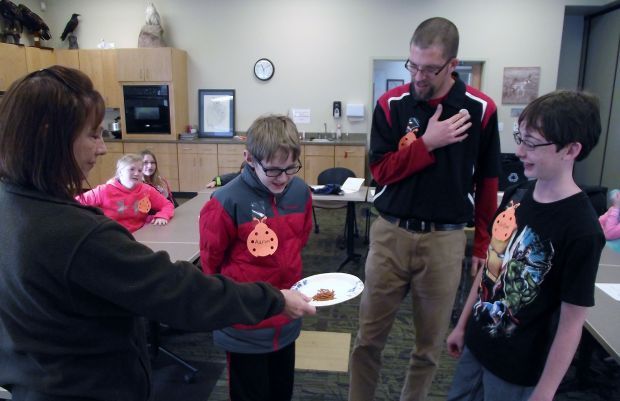 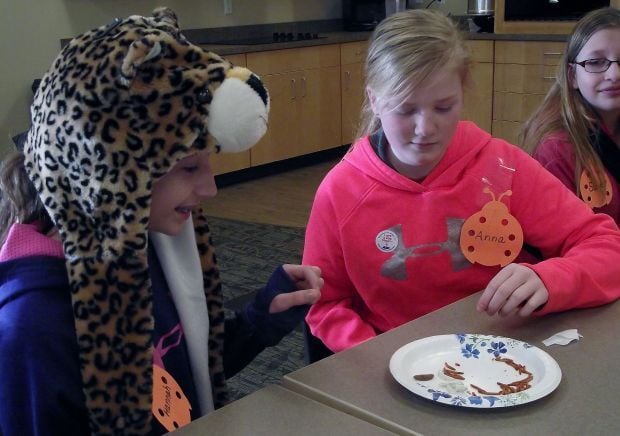 Turns out there wasn’t enough snow at the South Dakota Game, Fish & Parks Outdoor Campus West in Rapid City on Wednesday, so the class took part in an alternate activity instead.

Call it Plan B, as in bugs.

Miller’s class learned perhaps more than it wanted to know about entomophagy, consuming insects for food, during the GF&P’s class entitled “Who Eats Bugs?”

Everyone eats bugs, whether they know it or not, with insect parts finding their way into processed foods, breads and cereal, meat, vegetables, even tomato sauce used for pizza, according to Nicomas “Nico” Dollar, Outdoor Campus West school programs coordinator.

“Humans consume about a pound of insects every year,” she said.

Dollar told students about animals which not only survive, but thrive eating insects. Frogs use the sticky underside of their long tongues to snatch and eat bugs, while lizards have a suction cup on their tongues for the same purpose.

Spiders trap flies in their webs, then spin the catch in silk to save for a later meal.

Aardvarks in Africa forage for termites and South American anteaters will devour 30,000 ants in a single feeding, while leaving most of an ant colony to rebuild for another feast, she said.

The various species of bats in North America are insect eaters capable of snarfing 600 mosquitoes in an hour, she said.

“They help us with our insect problem,” she said.

Dollar said encouraging thinking about insects as food is a conservation issue, with the potential of creating jobs and reducing use of pesticides.

For the most part, however, Miller’s class wasn’t convinced. Only the teacher and a few students decided to partake in any of the insect delicacies Dollar offered, even with the reward of receiving an “I ate a bug today!” sticker.

On the menu were beetle larvae seasoned with cheddar cheese, nacho and barbecue flavors. And for dessert, white chocolate-covered crickets.

Sixth-grader Anna Busch decided to give one of the crickets a try, on the reasoning that people eat bugs every day, she said.

“It wasn’t that bad,” she said, comparing the taste to a candy bar, with just a little bit of crunch.

She opted, however, against sampling the flavored larvae, “because you could tell it looked like a bug,” she said.

Classmate Hannah Wasson just couldn’t bring herself to try any of the insect treats, even after encouragement from Busch.

One tiny nibble sent her to a drinking fountain.

“I wish we had gone snowshoeing,” Wasson said.

Sixth-grader Aaron Wirtz initially gave one of the nacho-flavored larvae the "not that bad" endorsement before heading for the drinking fountain himself.

Dollar said people in different parts of the world raise and consume crickets, dragon flies, grasshoppers, even spiders and bees, as part of a daily diet high in protein, vitamins and nutrients and low in fat.

Western countries, with other abundant food supplies, have an aversion to eating insects.

“People in other countries don’t have that stigma, but we have it here. We have all these food sources and we’re kind of spoiled,” Dollar said.

Dollar said the "Who Eats Bugs?" program is popular and that other classes have seen students more willing to sample bugs than Wednesday’s group.

“This is another of our programs that teaches kids about another kind of hunting,” she said. “It’s a good thing to know, because if you were out hunting and you were to get lost, it might help you to overcome that stigma, because you might have to eat insects to stay alive.”

Davies scheduled to start for Chicago against Atlanta

Berrios scheduled to start for Twins at Indians

Urquidy scheduled to start for Houston against Seattle

Packers GM: 'We are not going to trade Aaron Rodgers'

Packers general manager Brian Gutekunst says he can't envision any scenario in which he would deal quarterback Aaron Rodgers.

KANSAS CITY, Kan. (AP) — Kyle Busch thought he had a third-place car Sunday. His crew chief, Ben Beshore, though it was good enough for second.