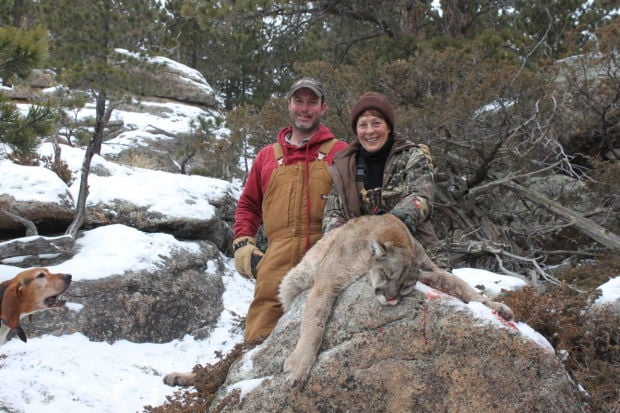 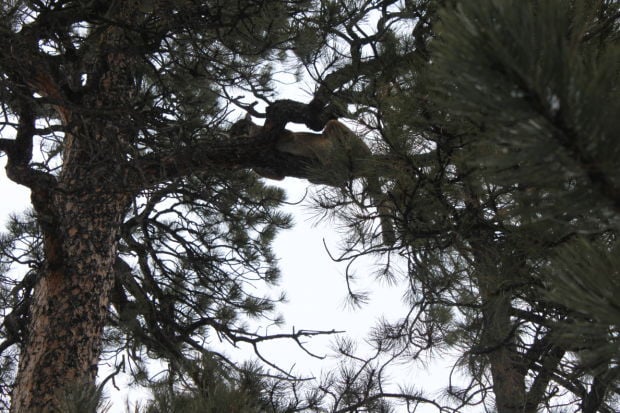 Dogs treed this 6-year-old female lion during a hunt in Custer State Park in January. Mary Collins, 75, killed the lion during her first hunt in more than 20 years. 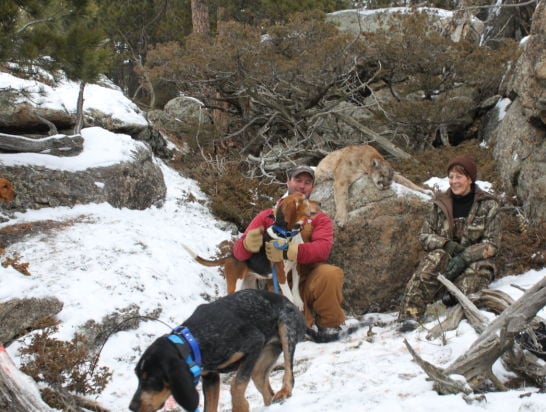 Shane Walsh, left, of Rapid City used coonhounds to track and tree a female mountain lion, which was shot by his mother, Mary Collins, 75, of Rapid City during a January hunt in Custer State Park.

Mary Collins comes from an active outdoor family, but she had not hunted or even fired a rifle in years.

So what was the 75-year-old grandmother from Rapid City thinking in early January when she lined up a mountain lion in her sights?

Collins was joined by her son, Shane Walsh of Rapid City, and five others for a hunt in Custer State Park. On the third day, Walsh’s Walker and Bluetick coonhounds treed the female mountain lion in snowy, boulder-strewn terrain. Collins fired from about 30 yards away.

“I hit him first shot. (She) fell out of the tree, ran a little ways, then dropped,” Collins said.

Collins took the shot because she was the only one in the party that had a tag.

“We all put our application in for those hunts and I’m the one that got it,” Collins said.

“Oh gosh, it was quite a trudge. I think we walked two and a half miles and followed while the dogs were chasing the lion,” she said.

“It was nasty country where we were at,” Walsh said. “It was tough walking.”

“That was the hardest part for me, yes,” Collins said. “It’d keep you in shape if you did that every day.”

If Collins had any rust with a Marlin .357 Magnum rifle, it didn’t show on the hunt, Walsh said.

“It’s been at least 20 years since she fired a rifle,” Walsh said. “She practiced a little before we went out.”

“The game warden said she had nothing in her stomach and was probably hunting for something,” she said.

“We found a couple of big bull elk that had been taken by lions. She wasn’t part of that,” Collins said.

Collins, who works at Rapid City Regional Hospital West, said she had always gone along on family hunting trips and had hunted deer years ago, but hadn’t given a lion hunt much thought.

“We come from a hunting family. Everybody hunted deer and elk. (Hunting a mountain lion) was nothing I had thought about or planned on until I got the license. I thought this’ll be fun,” she said.

“I do it every weekend," Walsh said, "either hunting in Wyoming or hunting bobcats in South Dakota. To see her shoot one was pretty neat."

But not everyone thought it was neat.

“My granddaughter called me a mean grandma because I killed a lion," Collins said. "There’s getting to be too many of them. They do bad things some times.”

Collins lives near Pactola with neighbors who have lost horses, donkeys, cattle and domestic pets to mountain lions.

“I can remember growing up, very occasionally we’d see a mountain lion or hear one, but you just never thought about them,” Collins said. “Now I go horseback riding a lot and I always think about seeing one out in the woods somewhere,” she said.

Collins plans to have her lion preserved in a full mount but she has no plans to hunt another one.

“Probably deer if I get a chance, but I don’t need any more lions,” she said.

“If she’s lucky enough to get a tag again, she’ll get to go,” Walsh said. “She’s pretty amazing for her age.”

Dogs treed this 6-year-old female lion during a hunt in Custer State Park in January. Mary Collins, 75, killed the lion during her first hunt in more than 20 years.

Shane Walsh, left, of Rapid City used coonhounds to track and tree a female mountain lion, which was shot by his mother, Mary Collins, 75, of Rapid City during a January hunt in Custer State Park.