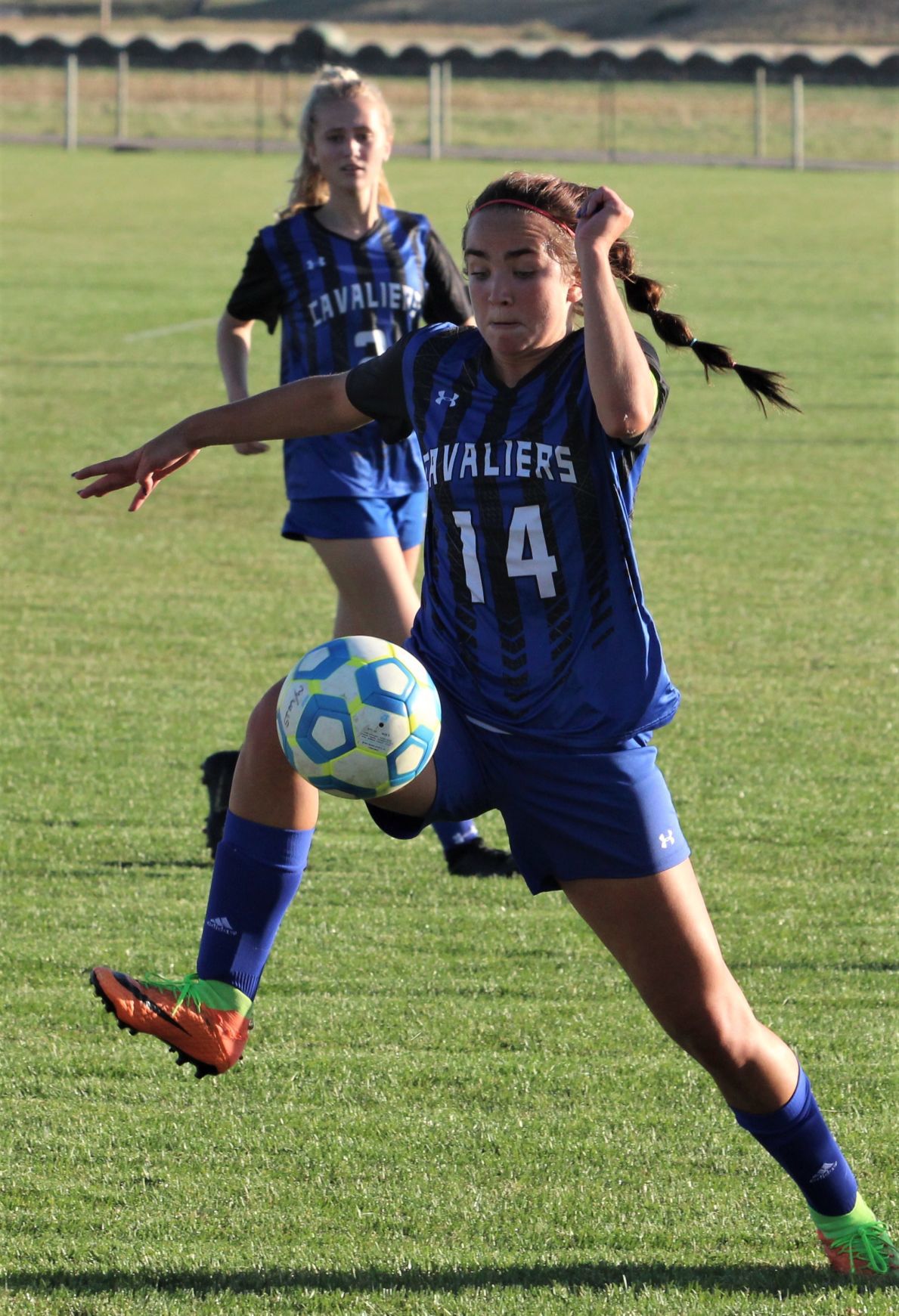 St. Thomas More's Vivian Hurd controls the ball in the first half. Hurd hit a long shot with 5 seconds left to secure a win for the Cavaliers. 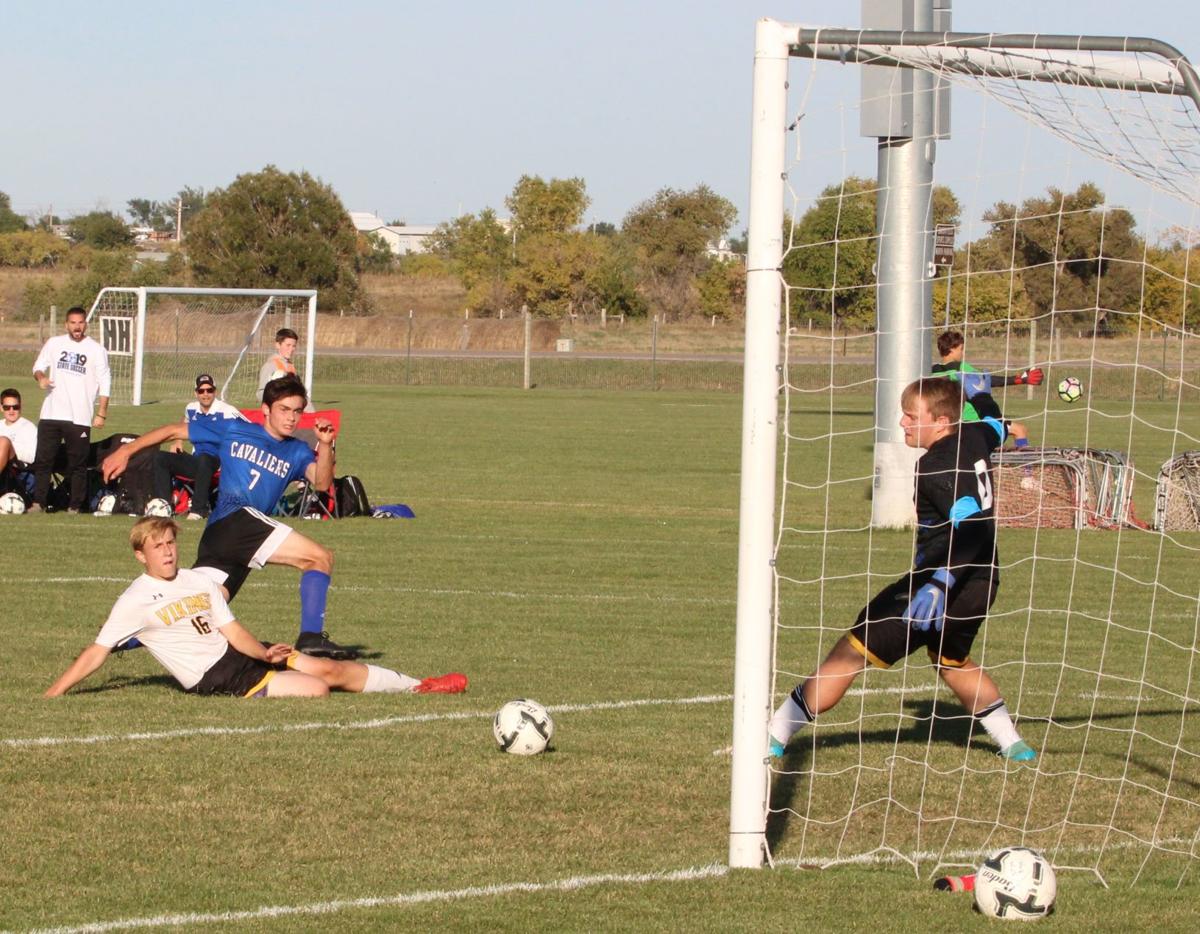 Samuel Evans scores for St. Thomas More from about 20 yards out with a left-footed strike late in the first half in the 2-0 win over James Valley Christian Tuesday in the quarterfinals of the Class A state playoffs at the Dakota Fields.

When St. Thomas More gave up the equalizer with six minutes left in the game, it seemed like it was headed to overtime.

As the ball was played out of bounds with less than 20 seconds left, that result was almost a lock — almost. With five seconds left, junior captain Vivan Hurd unleashed a shot from more than 30 yards out and the celebration began as the Garretson keeper watched helplessly as the ball carried over her head and into the back of the net.

The 2-1 win over Garretson Tuesday at Dakota Fields will send the Cavaliers to a match-up with No. 1 ranked Tea Area Saturday in the semifinals of the Class A state girls' soccer playoffs.

"One of the things I like to do most is motivate my team," Hurd said. "Shots like that can give us hope. It proves anything can happen. We will be playing Tea, who is nearly undefeated, and so it just shows that it can go either way at any second so we will just keep fighting."

The Cavaliers broke the ice with a goal with 31 minutes left in the first half. Erica Howard sent a long shot into the box. The Blue Dragon keeper tried to catch it, but the ball got away from her and Gabrielle Robbins collected it and put it away for the score.

Logan Pokorny kept her shutout intact when a shot ricocheted off the goalpost and she made a diving save on the rebound. The only goal she surrendered was when STM was called for a hand ball when a defender played the ball off of her knee and it bounced up into her hands to give Garretson a free kick. The ball sailed through the wall for St.Thomas More and the trajectory fooled Pokorny to tie the game with six minutes remaining.

"What we have worked on, and what has shown up lately is going to the ball and fighting and creating space for yourself," Noyes said. "That goal is a culmination of everything we have been working on."

Noyes said he knows playing Tea Area will be a tough match-up, but after this game, he thinks his Cavaliers are ready.

Samuel Evans broke through for the Cavaliers with 1:23 left in the first half. He collected the ball about 35 yards out and used his left foot to beat the defender and keeper to score from about 20 yards out.

The two teams traded possessions until the 35:14 mark of the second half when Jacob Brinkmann scored the second goal for the Cavaliers.

St. Thomas More will head to No. 2 Tea Area Saturday for second round action.

St. Thomas More's Vivian Hurd controls the ball in the first half. Hurd hit a long shot with 5 seconds left to secure a win for the Cavaliers.

Samuel Evans scores for St. Thomas More from about 20 yards out with a left-footed strike late in the first half in the 2-0 win over James Valley Christian Tuesday in the quarterfinals of the Class A state playoffs at the Dakota Fields.